The fragment was in a fair condition, with the colours still bright, however, it was very dirty and hard to make out details. The piece was slightly distorted and curling in at the edges, being restricted by the surrounding wool tape. Some woven slits were opening- an indicator that the tapestry was hanging under strain. The silk yarn was failing with exposed warps e.g. in the cravat. There were previous coarse repairs, notably around the cravat and face. the tapestry had suffered many small holes from moth damage e.g. holes in the hat and face with darned repair, holes across top section & to the lower left and right-hand edges. Tufted wool weft ends were coming through slits. The tapestry had been lined with a later hessian, which was degraded with splits.

The hessian lining was unpicked and removed. A previous repair patch was also removed. The tapestry was vacuum cleaned front and reverse to remove loose surface soiling. Tests were carried out on the wools for colour fastness. The later woven wool tape was unpicked and netted for washing. The tapestry and wool tape were wet cleaned and blocked out to dry. A fine Belgium linen scrim was prepared as a full support and the tapestry mounted on a frame in order to carry out conservation stitching repairs. There were many small holes due to moth damage. These were rewarped through the support and couched down with colour matching wools. The wool weft was weaker than imagined due to much moth damage on the reverse, causing the wool weft to fluff up on the front. The areas of silk loss were couched using stranded cottons to infill the bare warps, to re introduce colour and sheen, notably in the cravat at the centre.

With the stitching repairs complete (approx. 8 hrs per section), the tapestry was removed from the frame. The woven wool tape was reapplied as a surround, straightening it and stitching it to the front of the tapestry. The edges of the support were turned under and secured. The tapestry was lined with a closely woven fine linen. Linen was chosen, rather than the usual downproof cambric, due to the small size of the tapestry and being more sympathetic to the original.  Velcro mesh tape was stitched to the reverse of the top edge as a hanging mechanism.

The tapestry benefitted greatly from the conservation treatment. The washing has improved the appearance, the feel and the overall condition of the tapestry. The linen scrim support has provided a full structural support and the stitching repair has helped to stabilise the damaged areas and to make elements of the design more readable. The later woven wool tape has been retained to respect the historical display – it is been washed and straightened to improve the overall presentation. The tapestry has been made safe for re hanging and display at Packwood House. 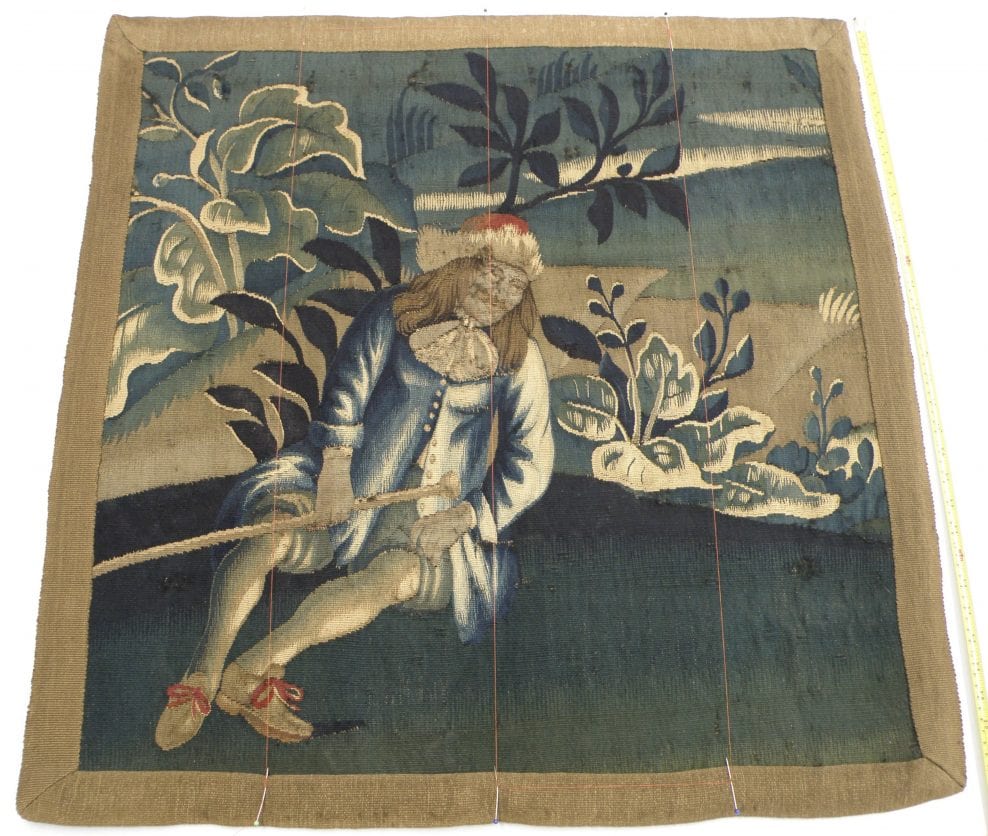 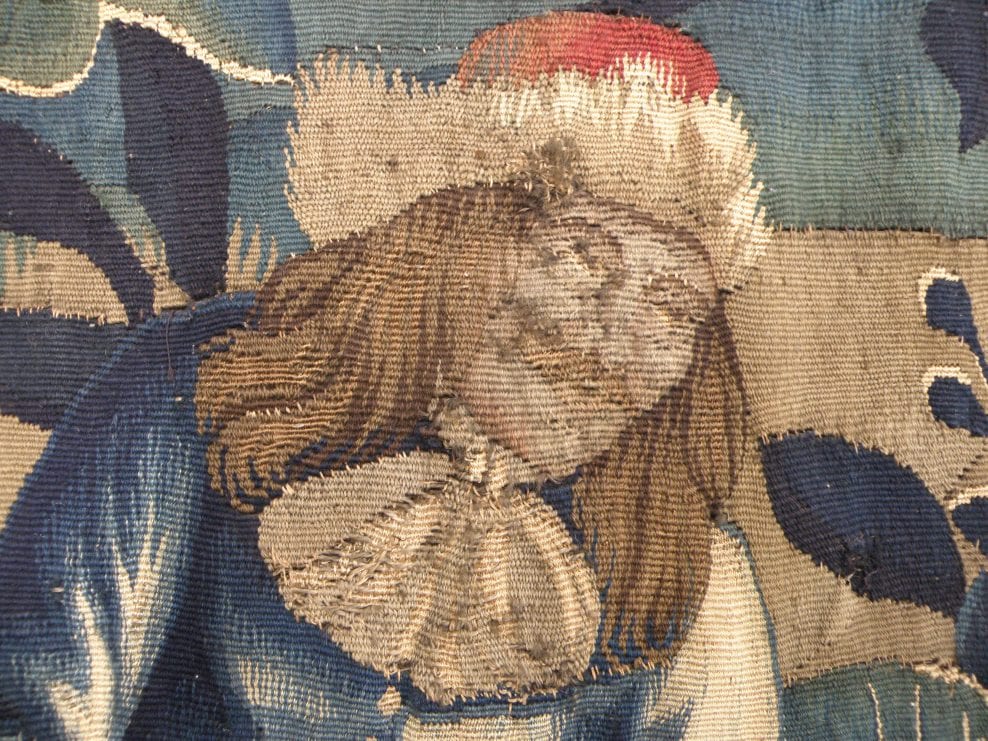 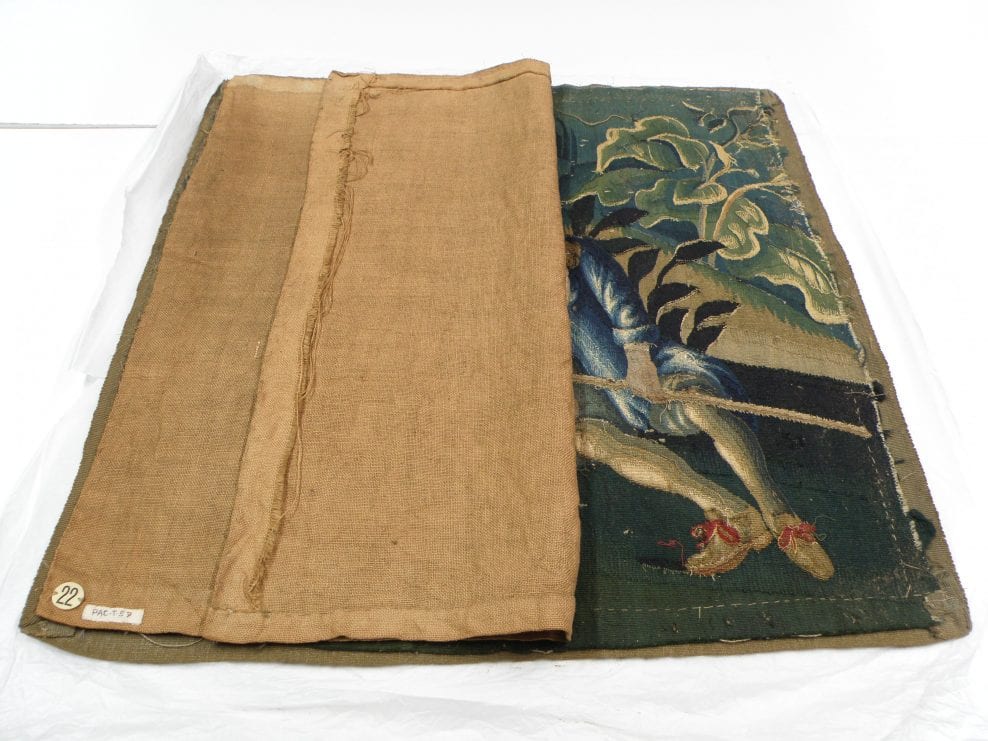 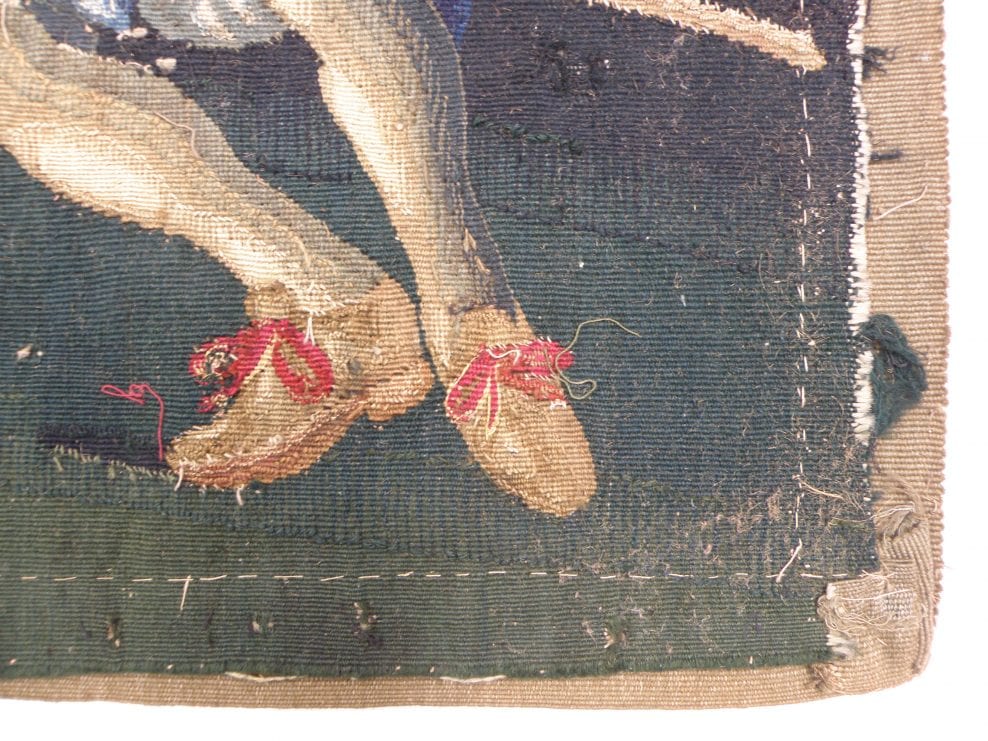 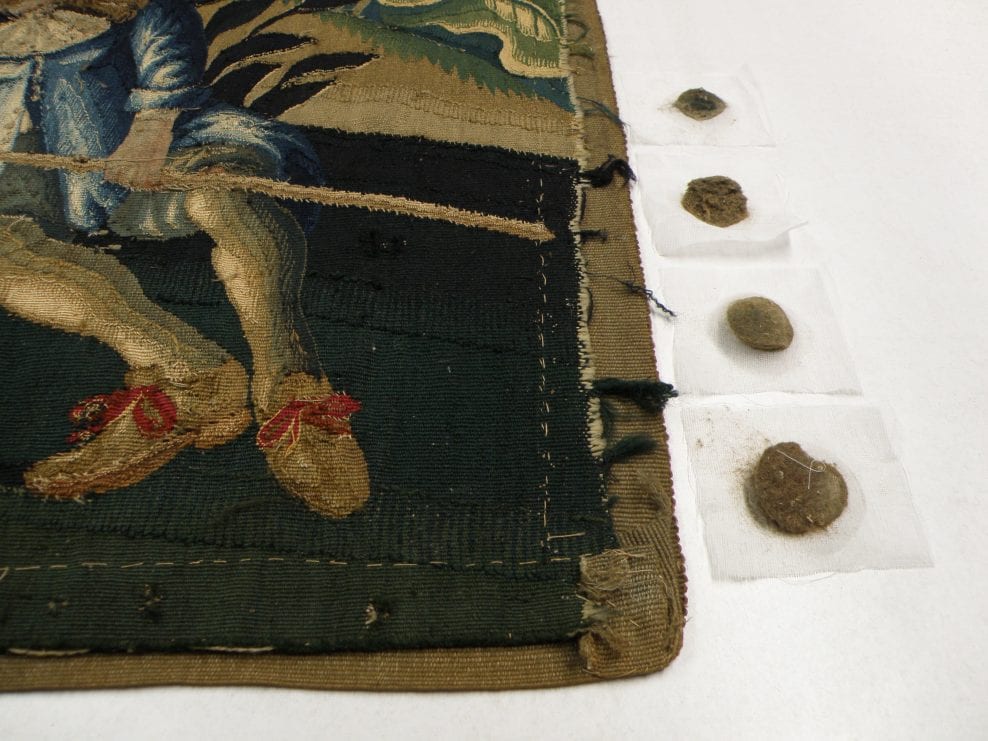 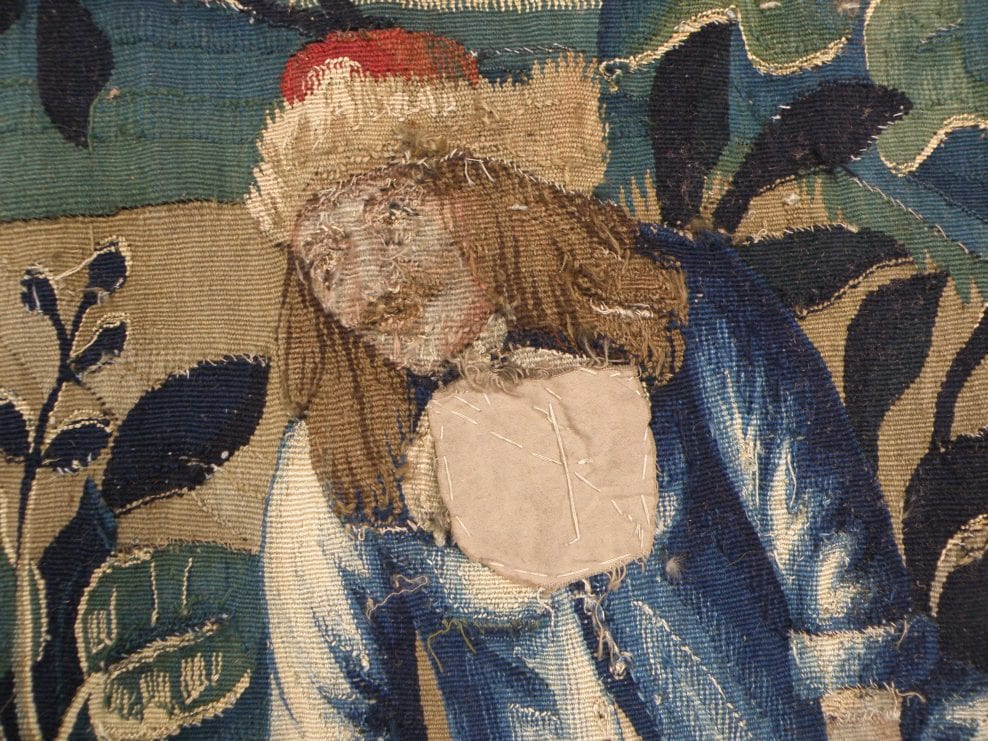 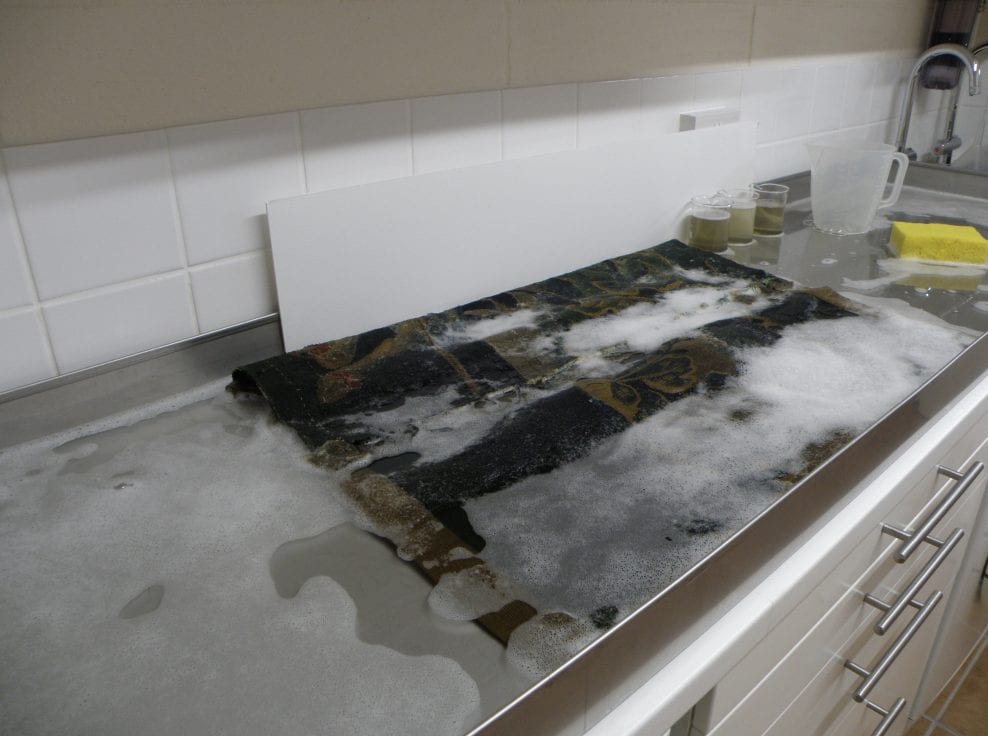 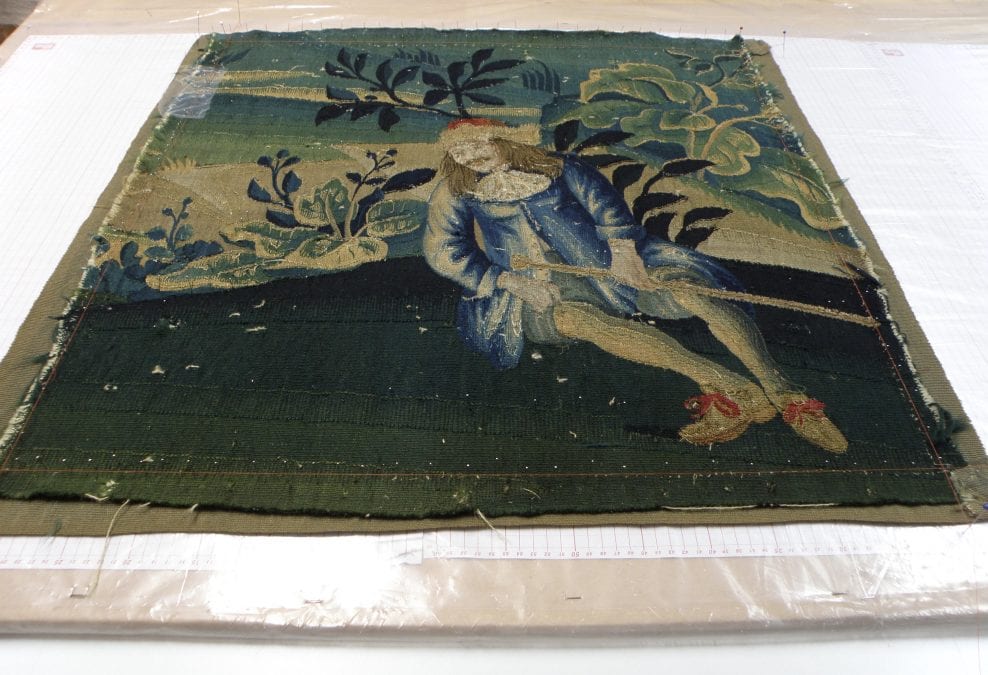 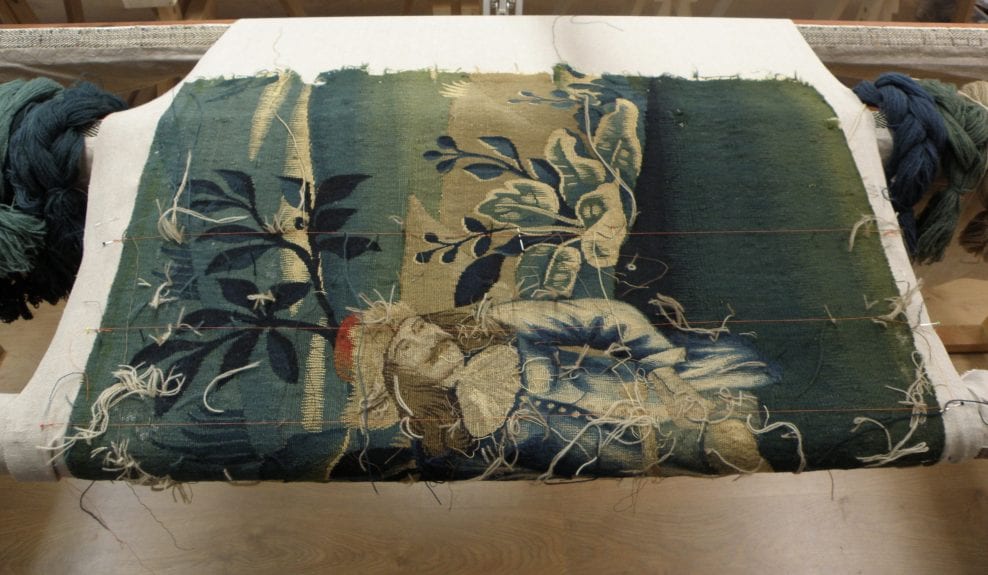 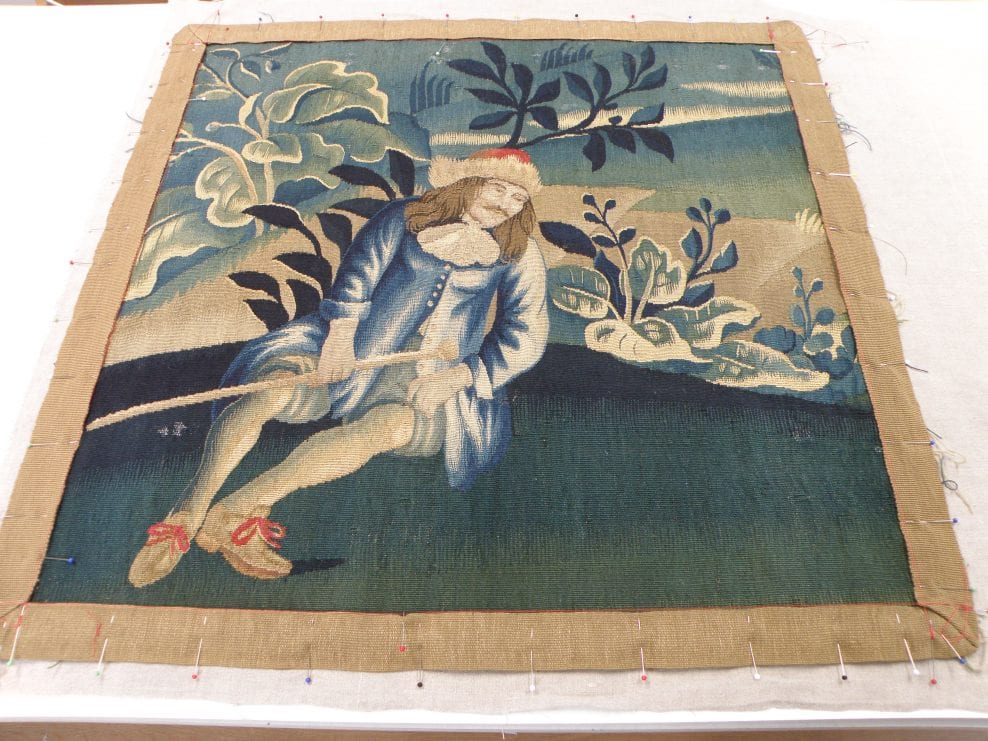