The Ickworth Church Conservation Trust (ICCT) was founded in 2006 by the Marquess of Bristol to conserve, maintain and repair the former church and churchyard of St Mary’s, Ickworth, Suffolk, for the benefit of the public.

During 2012-13, after six years of research and fundraising, the Church was restored thanks to generous grants from the Heritage Lottery Fund, English Heritage and donors.

In 2012, I was invited to tender for the conservation of the Altar frontal and was delighted to be appointed to carry out the work. The Altar Frontal and Superfrontal were in the worst possible condition, the Church having been made redundant in 1984 and closed up since 1998. During this time the textiles had remained insitu and been subject to extremely poor environmental conditions.

The Altar textiles, consisting of Altar Frontal and Superfrontal, were designed and made for St Mary’s Church, in honour of the Bristol Family. They were given by Lady Mary Hervey in December 1914, being in use on Christmas day for the first time. The work was carried out by the Ladies Guild of Decorative Needlework in Sloane Street.

The Altar Frontal is a crimson-coloured silk damask embroidered with an all over design of trailing stems and pineapple motifs worked in laid and couched gold thread work. At the centre is a cross, worked in shaded Florentine stitch, outlined with gold thread. To either side is a vertical panel of red silk velvet, embroidered with a scrolling design worked in shaded coloured silks and laid gold thread, each panel having an initial at its centre, to the left A, to the right W, the initials relating to the Bristol family. It was clear that the embroidery has been professionally worked and is of a very high standard. The lower edge is decorated with a block fringe of crimson silk and gold coloured metal thread. The Altar Frontal is mounted onto a wooden stretcher frame.

The Super Frontal has a front pelmet of red silk velvet embroidered with a central P over a cross, bordered on both sides by scroll work designs worked in coloured silks and gold thread. To either side is a stylised motif of a pineapple, worked in gold laid thread. The lower edge of the pelmet is decorated with a fringe of crimson silk and gold metal thread, matching the Altar Frontal. There are two side pelmets of red silk velvet edged with fringe. The Super Frontal has a rectangular shaped central cover of crimson wool fabric, designed to fit over the wooden altar table.

The condition was quite appalling. The textiles were extremely dirty, with much surface dust and dirt and had suffered from the most severe pest infestation. The gold thread embroidery was hanging loose and tangled. The treatment was perhaps the most challenging I have faced, starting with freezing both the stretcher mounted Altar Frontal and the ragged Superfrontal at the facilities of Ipswich Museum before they could come anywhere near the studio.

A progress report to the Trustees in January 2013 reminds me that the work required was far more extensive than anticipated.

The Altar Frontal was removed from the stretcher by releasing the rusted metal tacks. The eaten wool linings and backing fabrics were removed to allow the Frontal to be treated. Surface cleaning greatly improved the appearance of the silk damask and embroidery. The Frontal was then humidified to smooth and block it out. It was applied onto a full backing support of dyed crimson silk to give structural support, being mounted onto an embroidery frame for treatment. The many loose and tangled strands of gold-wrapped thread were repositioned and stitched down through the original damask and support fabric. Sections of gold laid threads within the central roundel of the cross were detaching and these were re secured by stitching.

After various trials, the damaged panels of dark red silk velvet were supported onto a new dark red velvet fabric, with stitching repairs being worked through both layers. The original silk velvet remained in a very weak and vulnerable condition. Again the loose elements of gold metal thread were repositioned and secured in place. All holes and broken areas were stitched down onto the new velvet. The narrow silk and metal thread braid, which borders the panels of velvet, was re stitched in position.

The original stretcher frame was reused. It was covered with linen as a base fabric and the Frontal was stitched onto the board. The blue linen along the top edge was replaced with a new dark blue linen fabric. The stretcher was reduced slightly in height to allow for an ‘L’ shaped oak support at the base for the stretcher to sit on. This will prevent the textile-covered stretcher from resting directly on the stone floor.

The film was heat sealed to the back of the velvet. The treatment was successful in supporting the splitting, bald areas of velvet, which were found to be too friable for stitching alone. The silk velvet fabric of the side pelmets was found to be very thin, weak and in a very poor condition. In conservation we strive to retain all original elements of the object, however, in this situation where the textiles of the Altar Frontal will be on open display and not in a closely controlled environment, it was recommended that the plain velvet side panels be retired and replaced with new silk velvet. The condition of the original silk and metal thread braid and fringe was of great concern. It was very weak and much damage had been caused by the insect infestation. There were breaks, loss, distortion and areas of discolouration from damp. It was decided to retire the original fringe and commission a replacement to match the original.

The original crimson wool cover had been almost completely lost due to pest damage. The silk velvet pelmets were mounted onto a new crimson cotton repp fabric (it was decided not to risk using a wool fabric).

The final results made dramatic ‘before’ and ‘after’ images. I was very pleased to have achieved such results that transformed the condition and presentation of the Altar textiles. It was a proud moment, when on a summer’s evening in June 2013, all those involved in the project came together to attend an opening Service of Blessing held by the Bishop of St Edmundsbury and Ipswich. The Altar Frontal was on display and in use for the ceremony and the Church reopened to visitors. 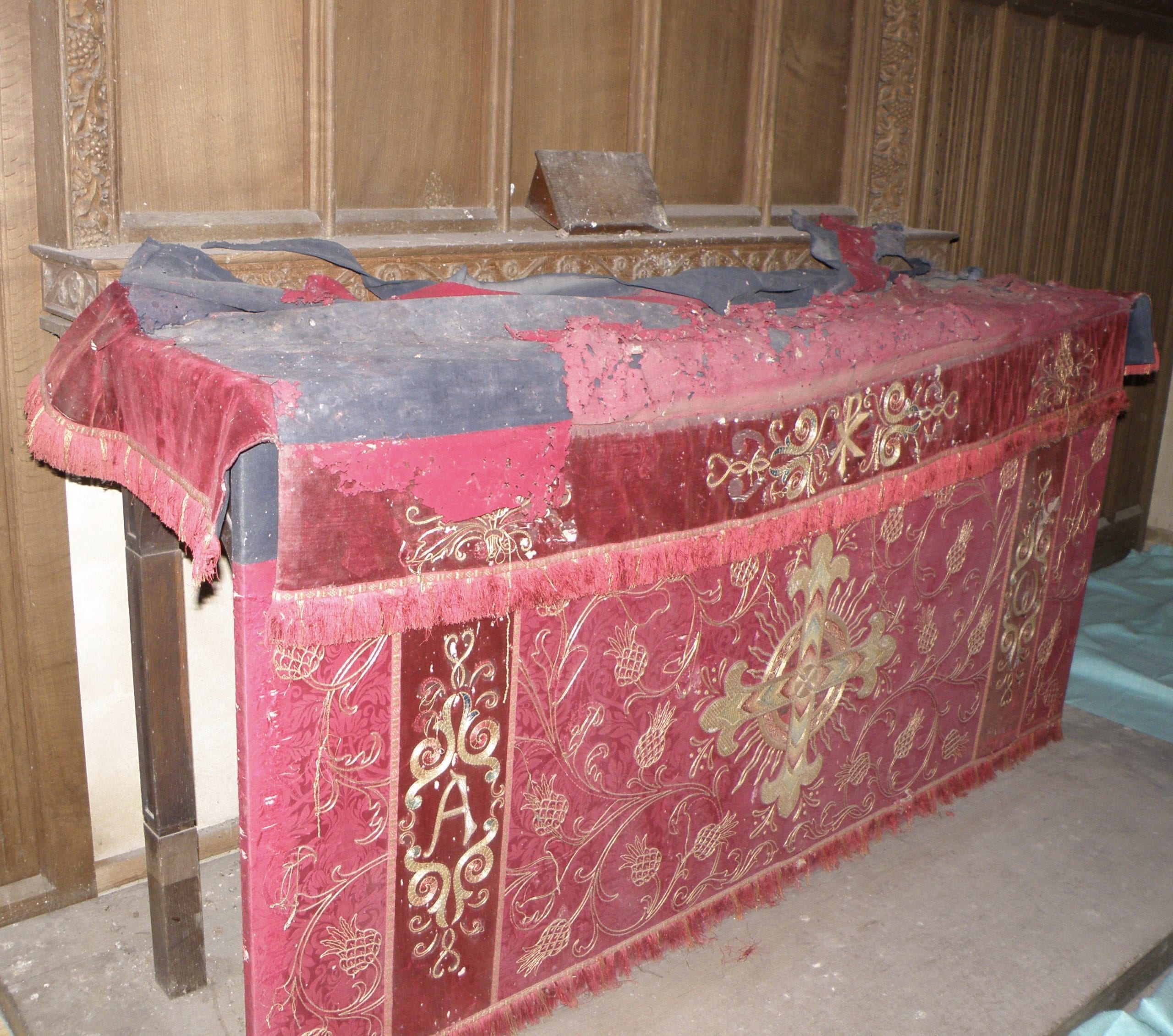 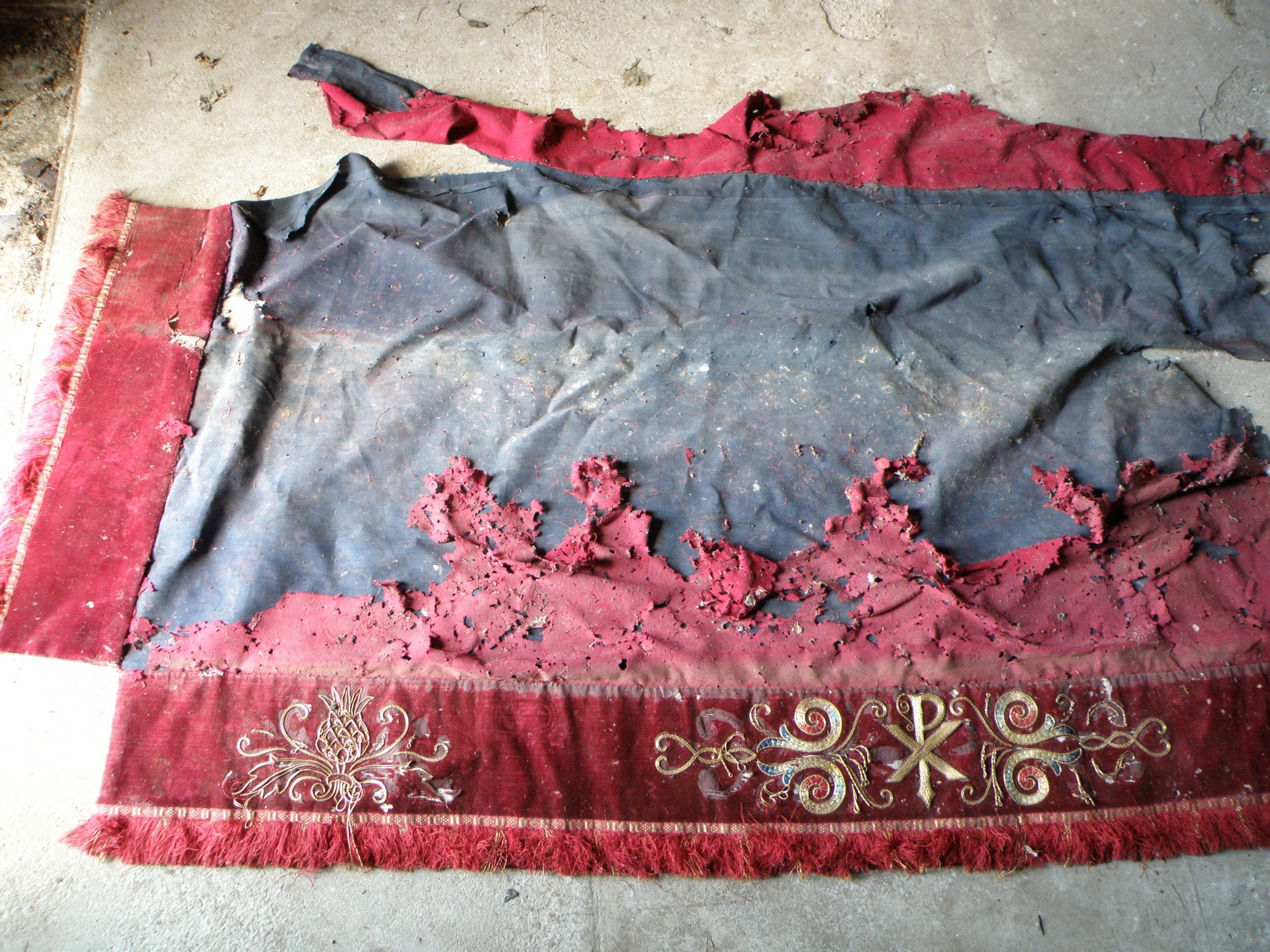 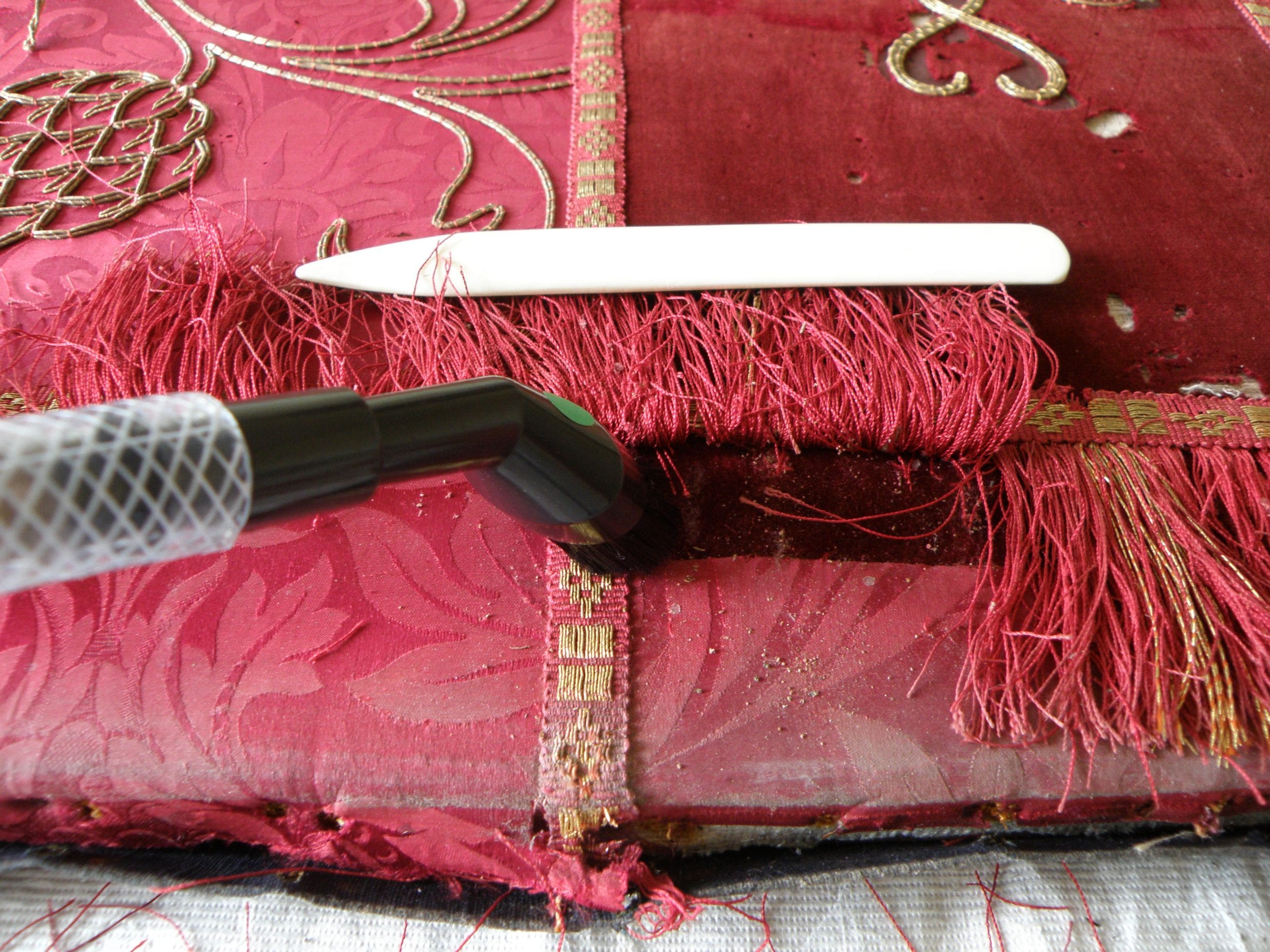 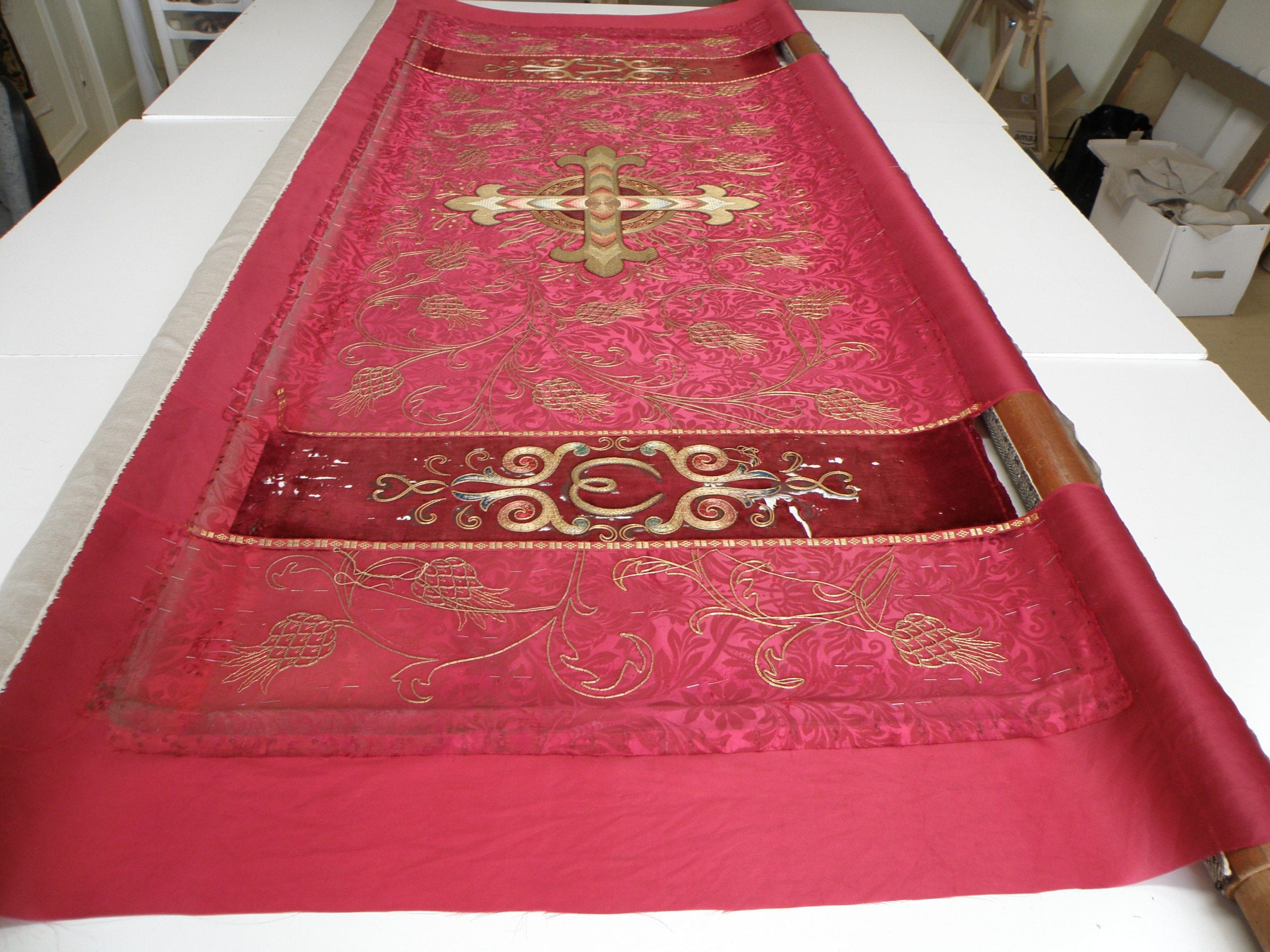 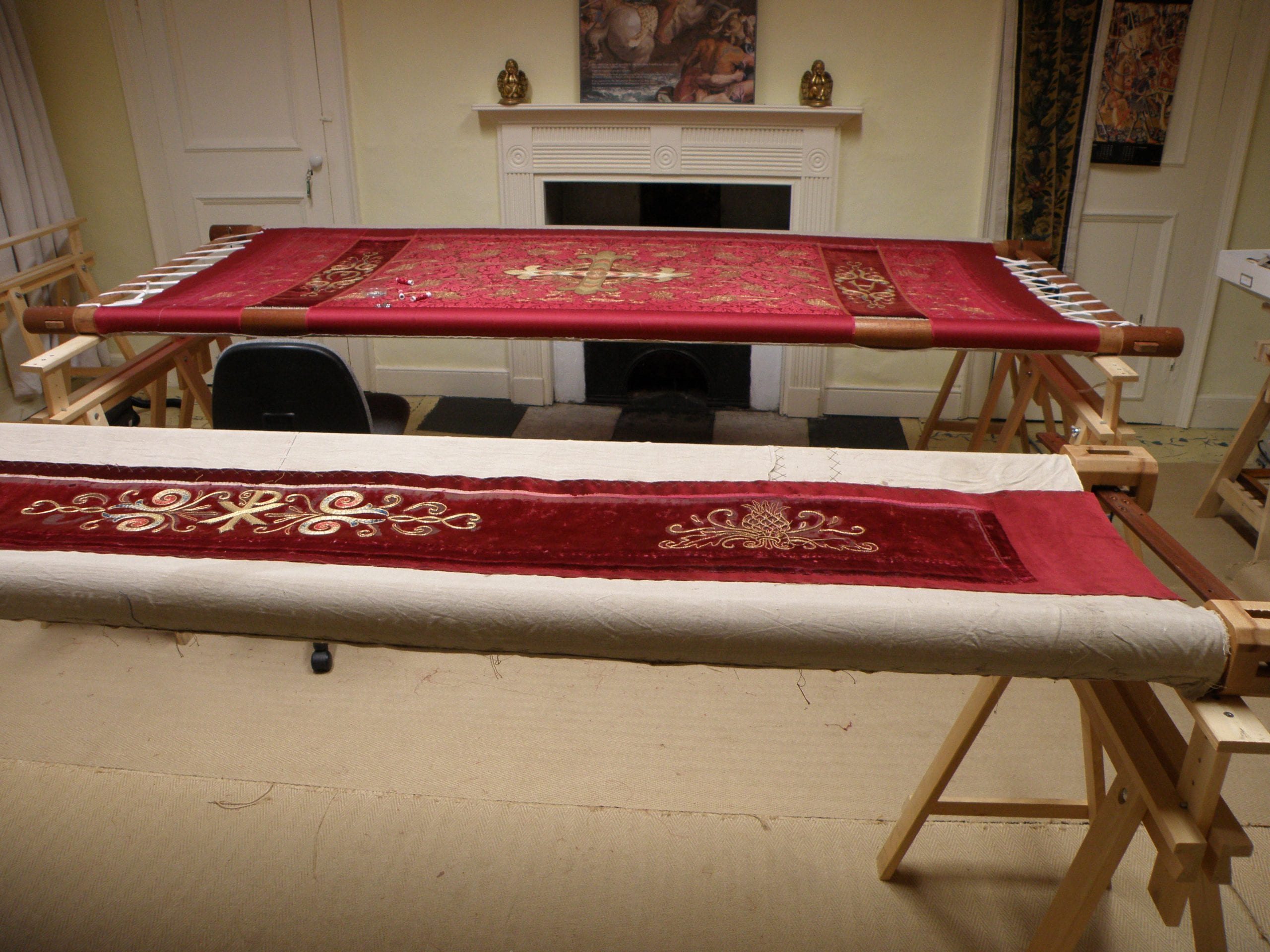 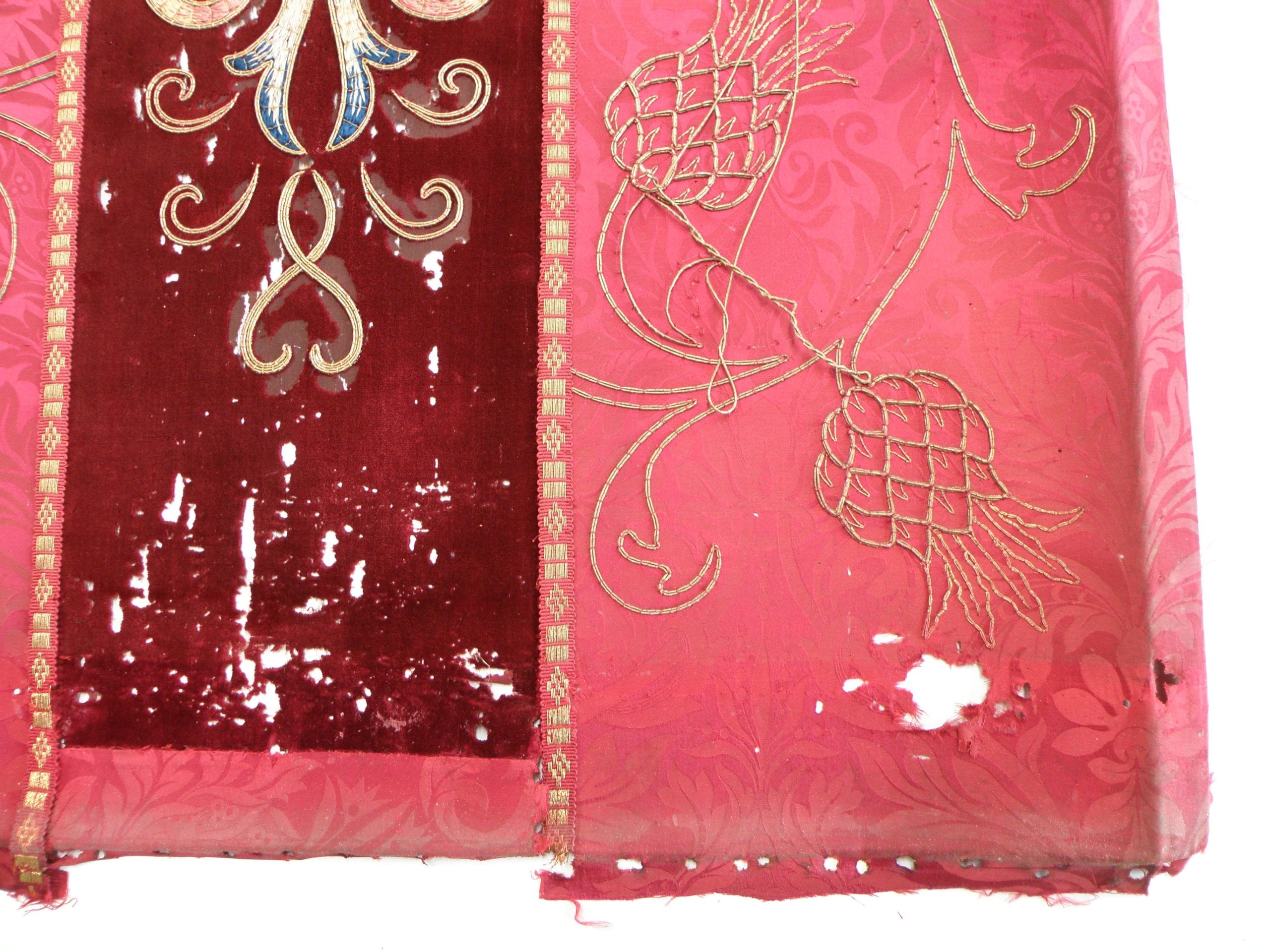 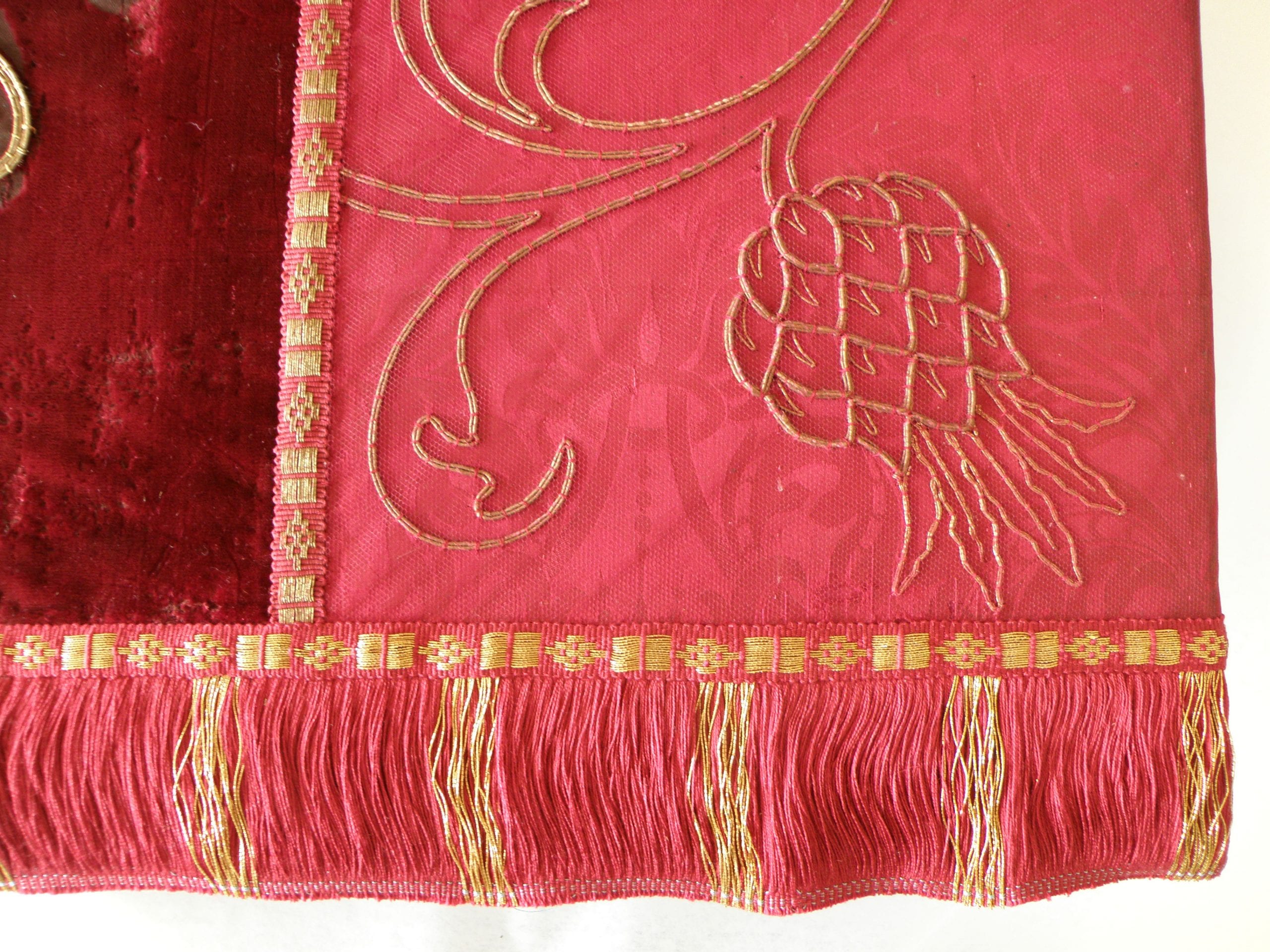 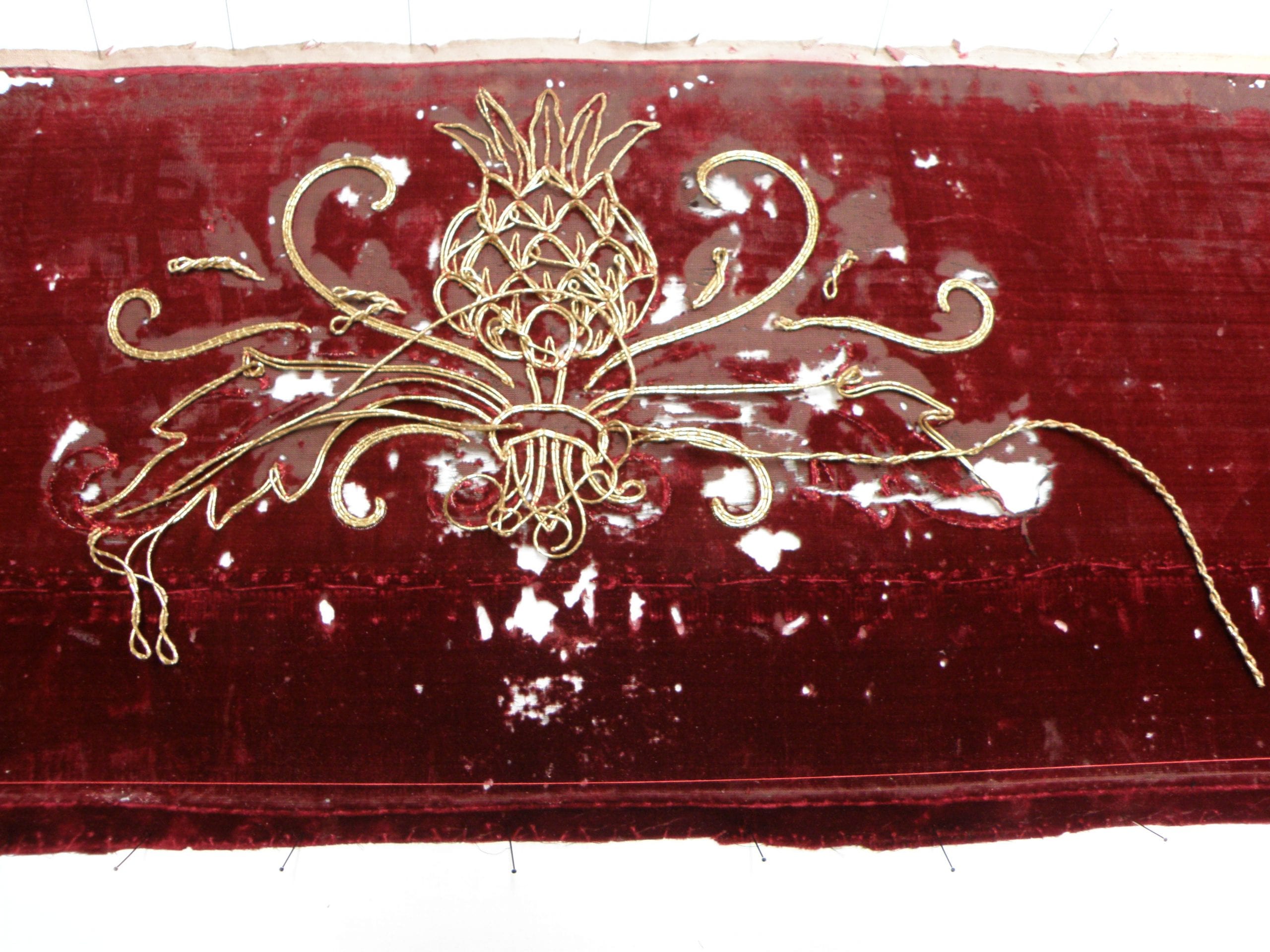 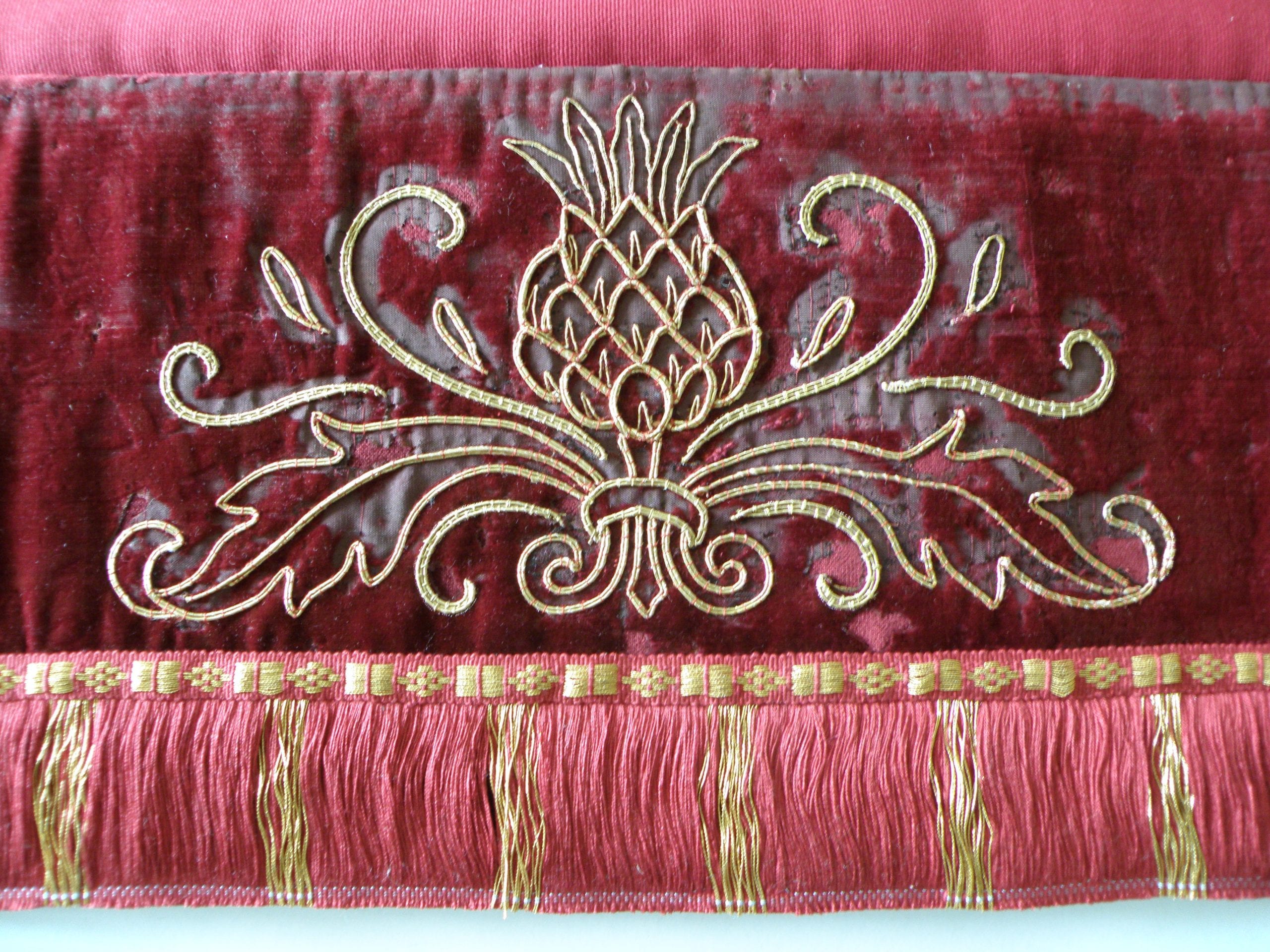 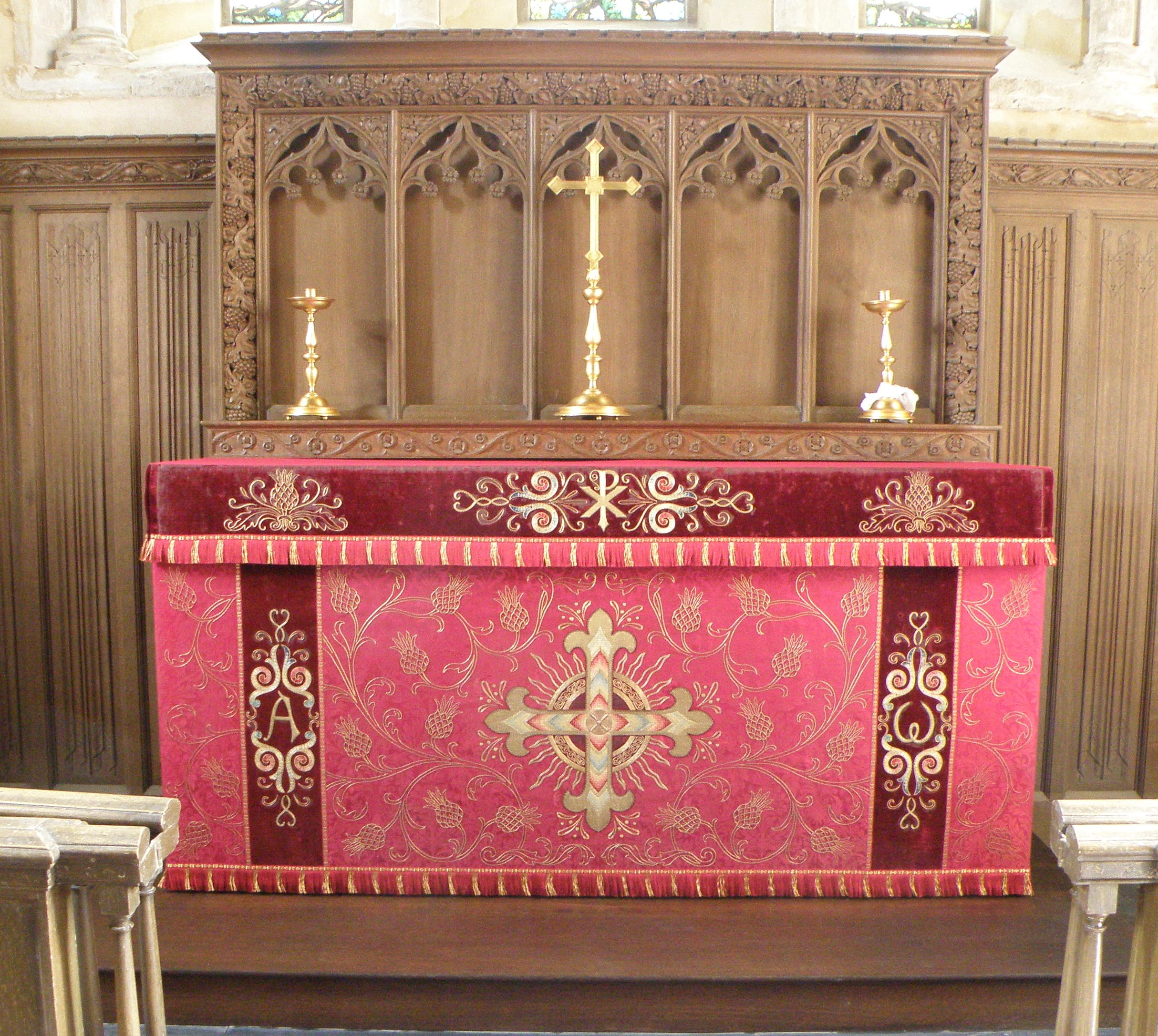