Following the awful fire in the GSA in 2014, we completed a survey of their entire plaster cast collection, and out of all the larger casts we surveyed, the GSA chose five specific free standing 3 dimensional plaster casts and 6 low relief panels which had all been in the library corridor. We moved them to studio 39 for actual conservation work’s, the first effect of the fire was the visual change in surface colour and patina of the casts, from the different lighter coloured more original surfaces at the lower areas to the now richer, darker and textured upper surfaces. But there were many challenging structural conservation aspects of the work, where new processes required to be designed, through analysis and materials.

The plaster casts specifically chosen by GSA for the conservation work varied in size and sculptural form: Queen that may have a kings head, Laocoon, Lorenzo de Medici, Mercury, Mother and child of Bruges, and the six relief panels from the Cantoria. Due to the original GSA display height of the Cantoria panels, these panels had received more overall damage caused by the fire, and these casts were contaminated by ceiling and wall materials becoming soluble and potentially ingressing the porous substrate of the plaster during the fire, and became nearly even in their visual change from a cream colour to an overall very dark colouration patina. Half the work was completed in situ at the GSA, and half was completed within our workshop.

We completed trials and analysis throughout the project, from analysis of the different surfaces of the casts, to CT scans of the plaster substrates, which included finding out the approx temperatures that the gypsum plaster had reached during the fire of at least between 130 and 180% C, and this was really important for the decisions on the different conservation works.

The analysis also included endoscope, thermography and X ray. Through these forms of analysis and throughout our conservation works we learnt that each cast had different surface applications, from very little surface layers remaining to impervious bright pink layers found on Mercury, and very different substrate manufacture, different thickness of plaster walls, some areas hollow, some areas solid, some with internal armatures, and some without, and different forms of armatures from hessian to wood to metal.

We had the challenge of consolidating structurally from the inner substrate out. Our inspection found the large plaster casts to be hollow, yet the plaster gysum wall thickness varied from 5 mm to 40mm, with parts of the lower sections to be solid gypsum with hidden internal metal armatures. The actual gypsum hollow shells were very fragile and brittle and required consolidation work.

The visual surface patina was not just in colour but also in texture, and respecting the process that had occurred, we even grouted inside all the raised bubbles using hyperdermic syringes and needles, filling the spaces between plaster substrate and paint.  Our processes encompassing building and medical tools. The final treatment was to protect the new fire damaged surface patina.

The conservation work was a huge challenge and Final Reports with all analysis were documented for the GSA. Then the second fire of 2018 happened, and sadly the Laocoon was lost to the fire, but his hand which had been stored seperately was found, and this is the only physical remains of the plaster cast, and therefore even more emotive, and we were asked to make a display for it in 2019. Luckily we had moved the smaller GSA fire damaged plaster casts to our Edinburgh workshop, and therefore the figure of Mercury and all the Cantoria panels survive and have been returned to the GSA. 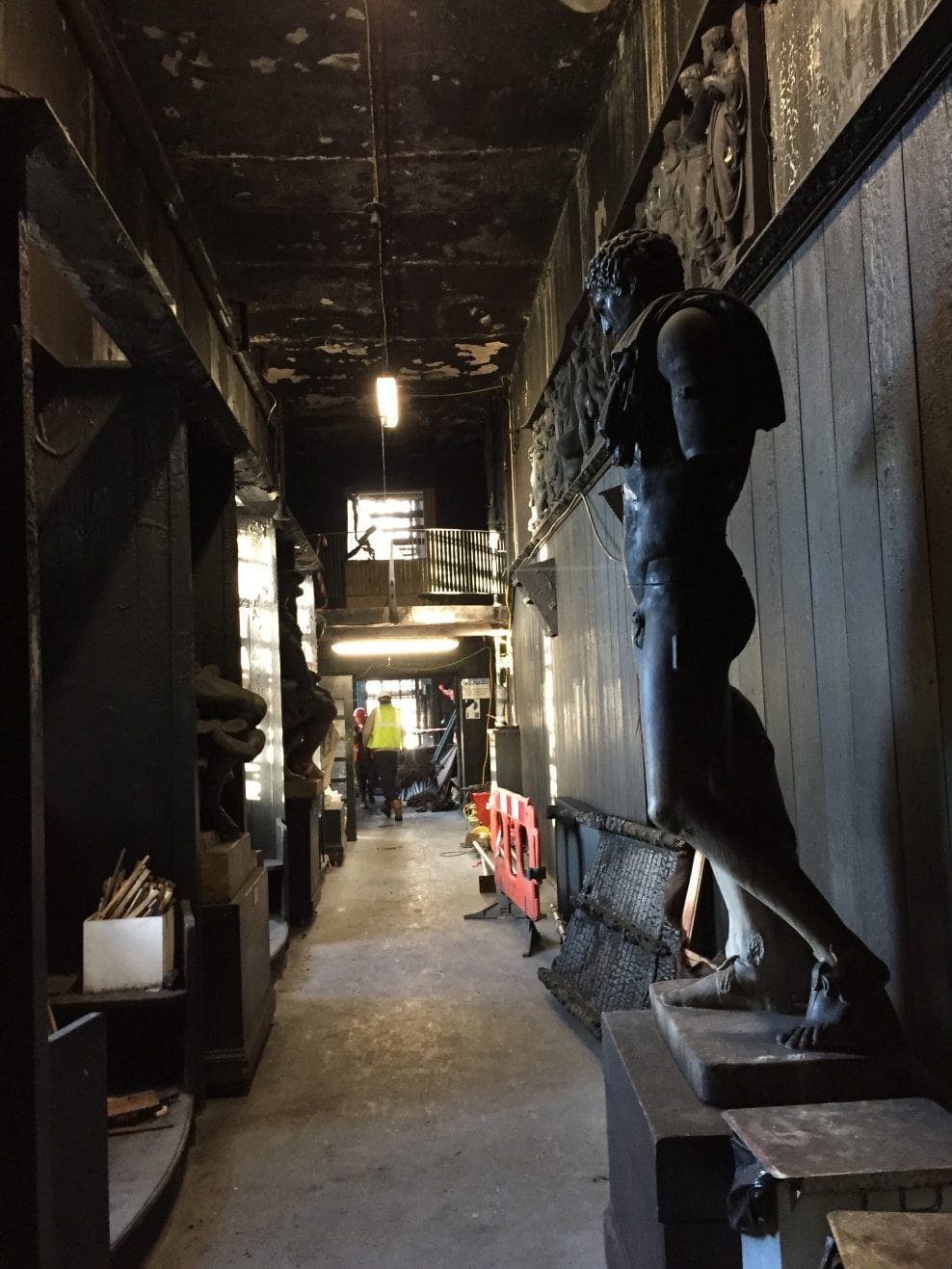 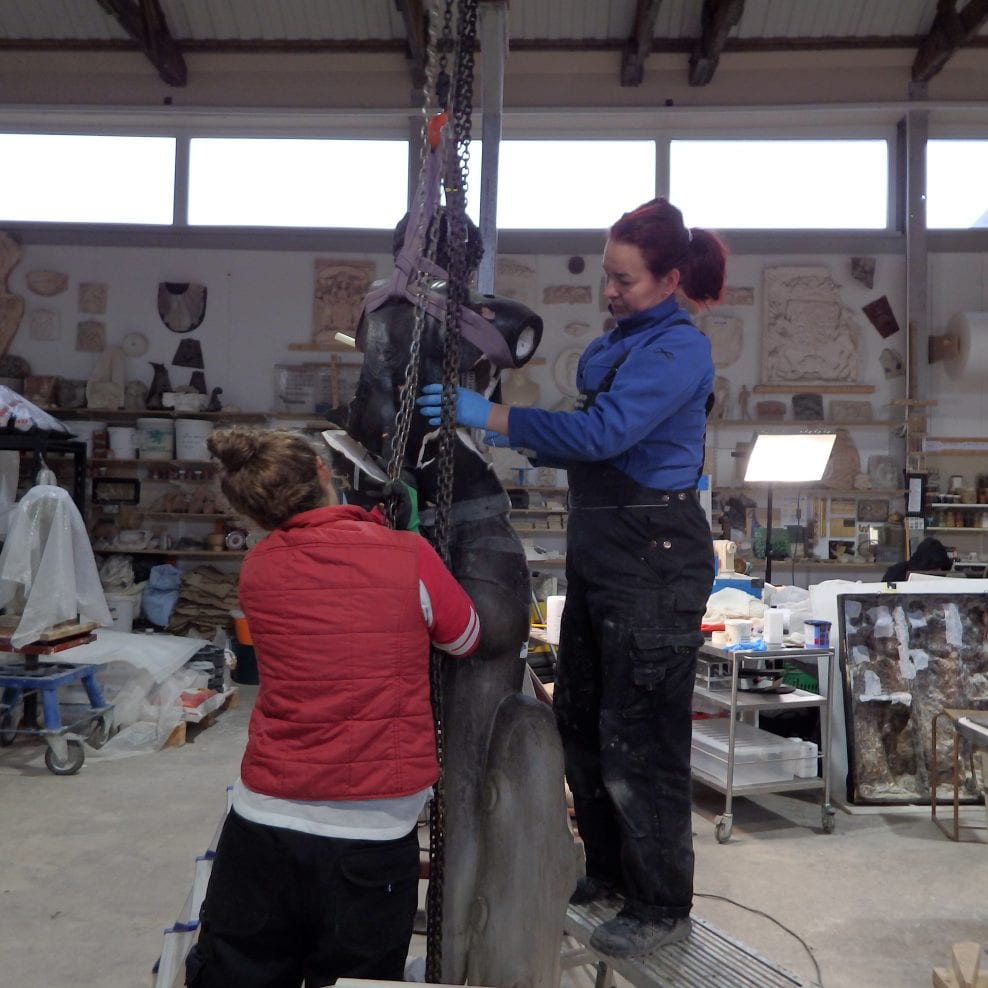 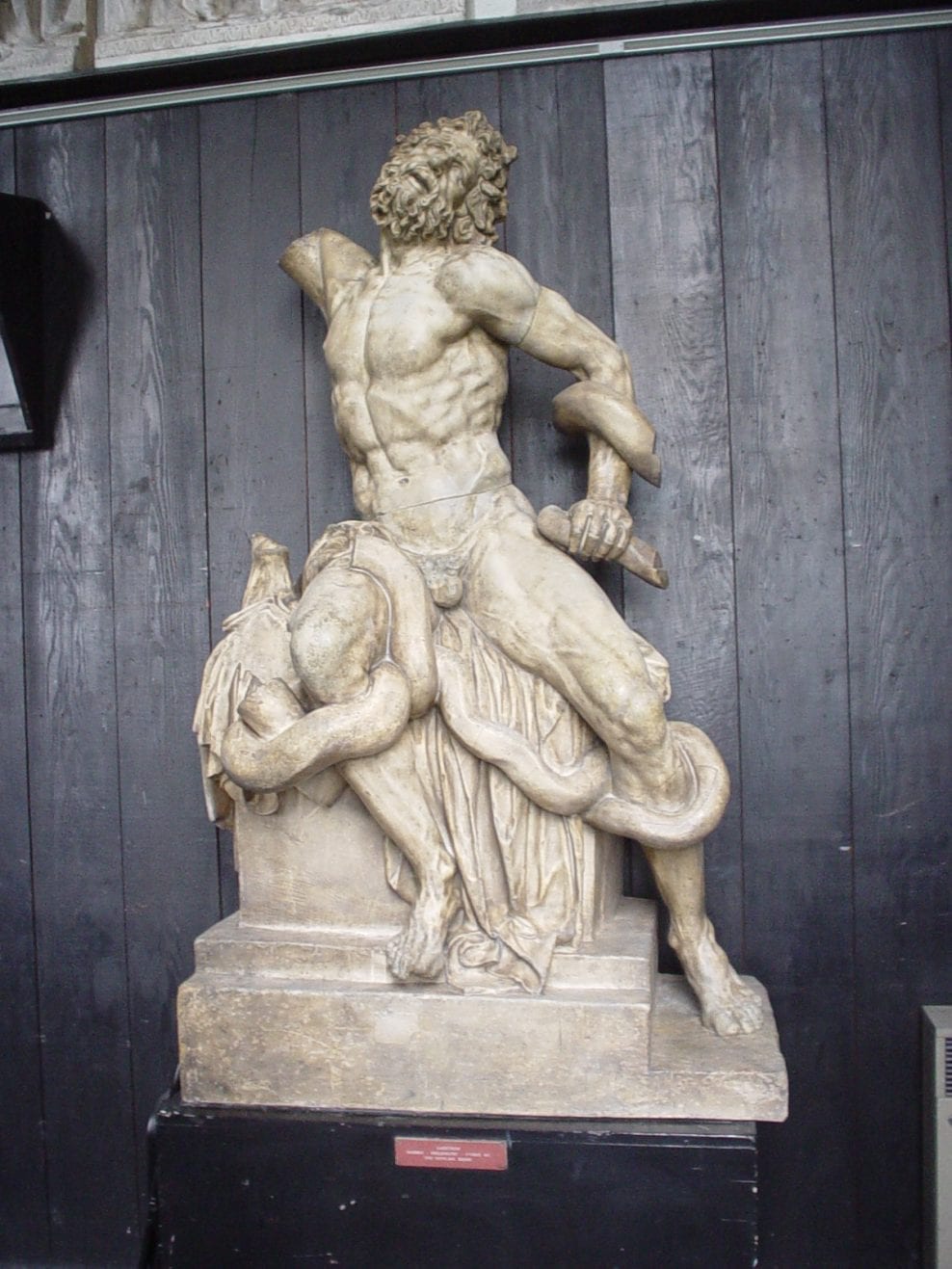 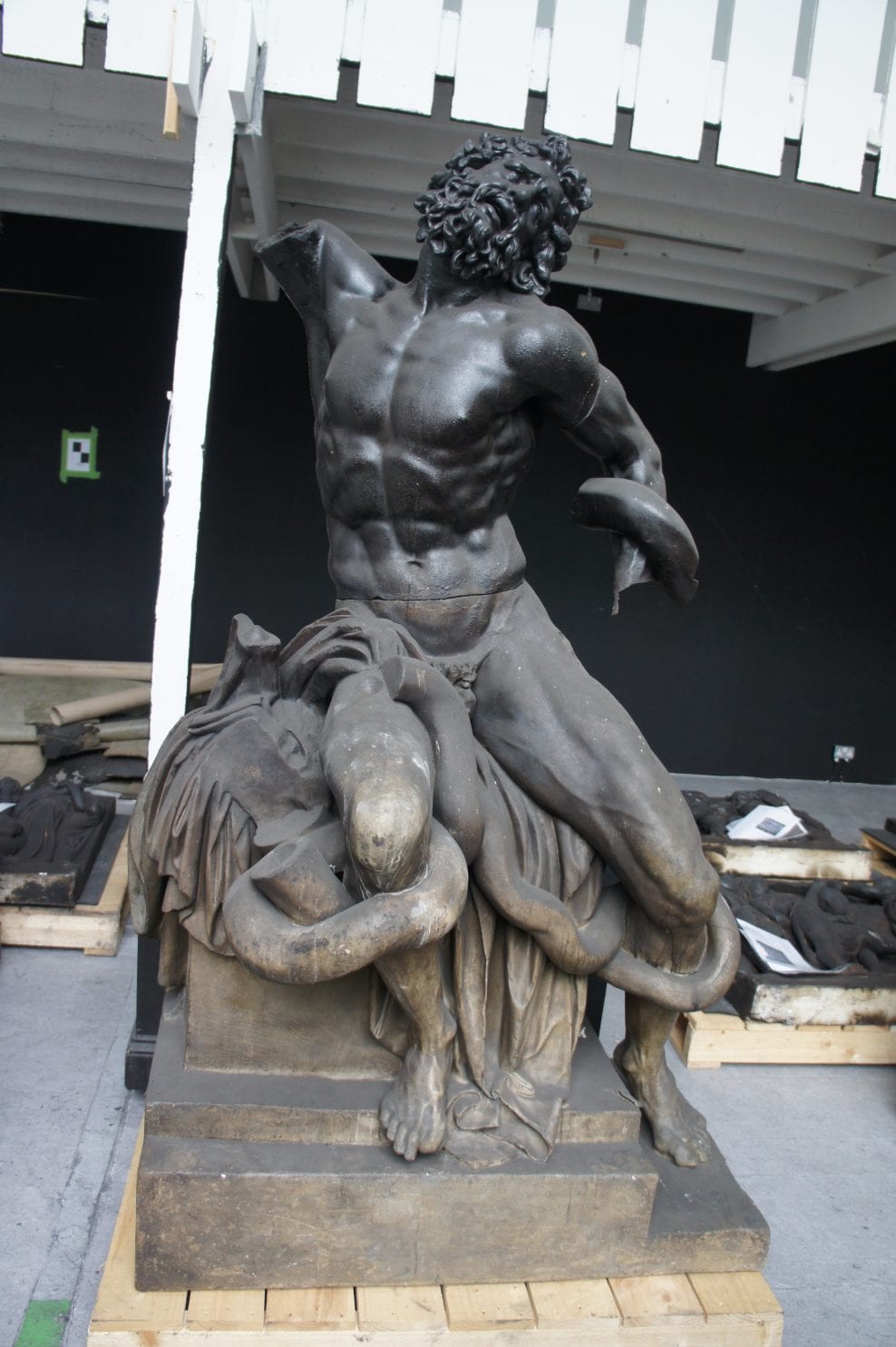 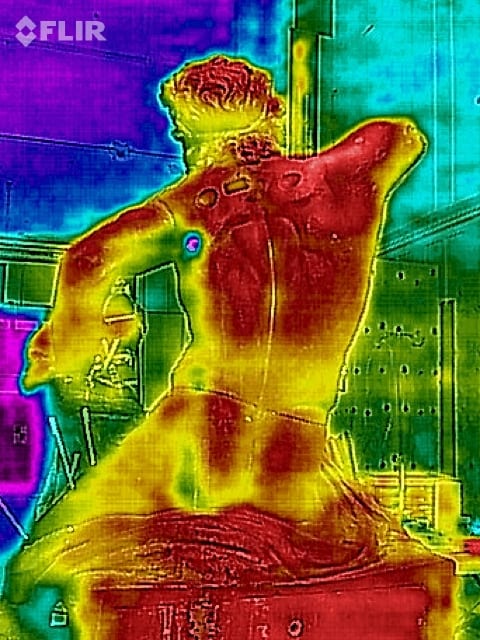 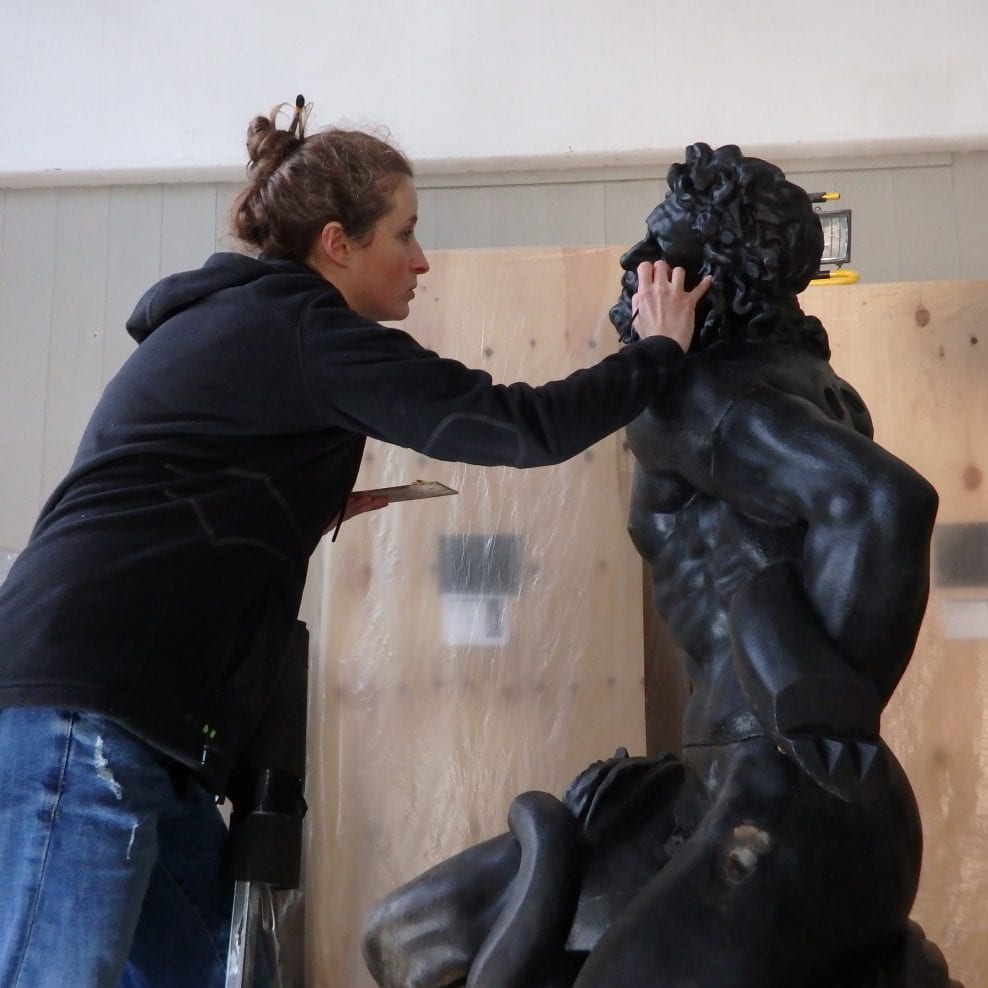 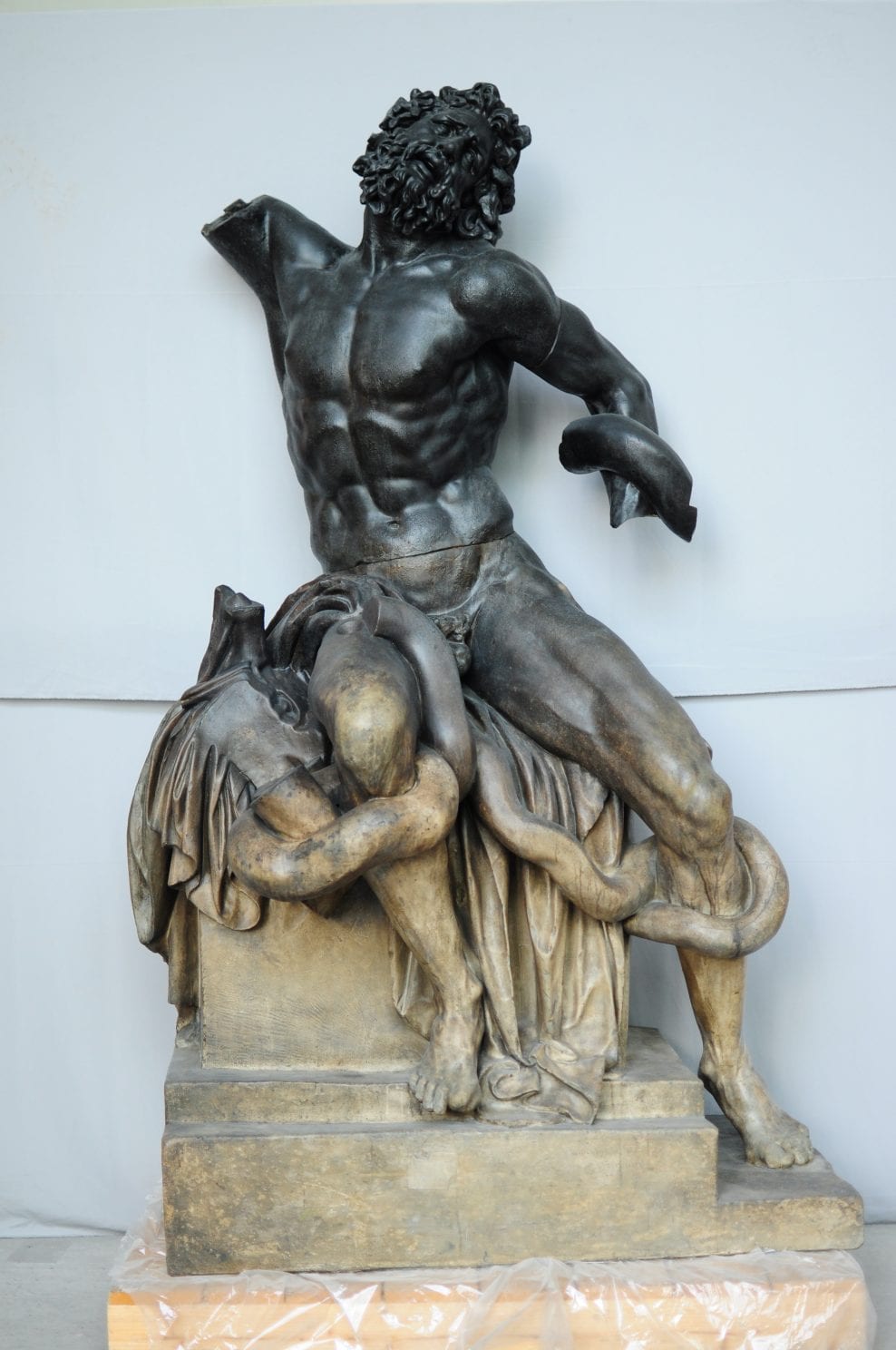 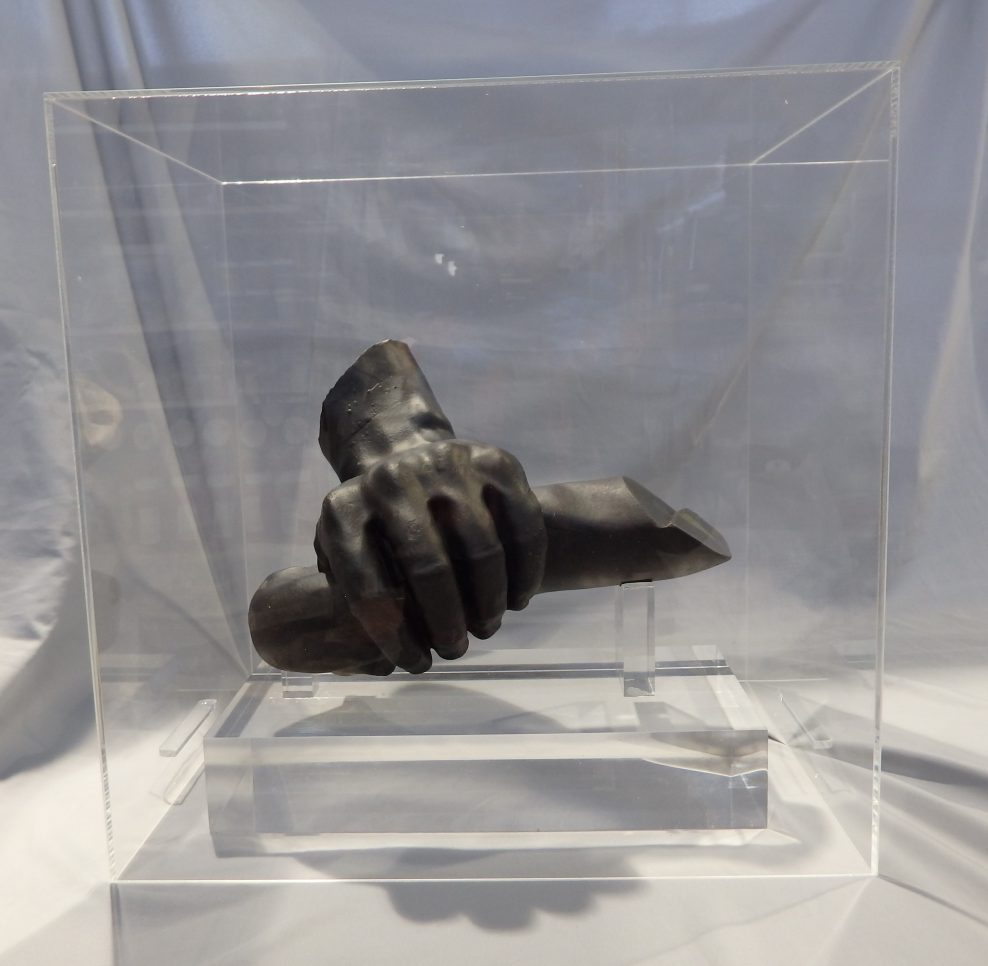