The renaissance sandstone statue of John Cowane on John Cowane Hospital, Stirling, Scotland, was to be conserved. The majority of the work was to research the original paint scheme, and several options were given to the Client, dependant on if any original paint was found, following analytical research.

The conservation work was carried out with and for Benjamin Tindall Architects and Patrons of Cowane’s Hospital Trust, with Curatorial and Conservation research in Scotland and the Netherlands.

The statue is thought to be from approximately 1640, however the 2019 colour profile was not in keeping with this time period, and was flaking, blistering and peeling over a large amount of the surface. Use of multiple techniques in paint analysis were carried out by Northumbria University and Art and analysis, for the restoration of the John Cowane Statue (1640), Cowane’s Hospital, Stirling, Scotland.

Chemical analysis, employing cross-section analysis, pyrolysis gas-chromatography-mass spectrometry (pyGC-MC), scanning electron microscopy-energy dispersive X-ray (SEM-EDX) and Fourier transform infrared spectroscopy (FTIR). Identification of each of the paint layers in each sample was identified, as well as identification of the drying medium employed in the paints.

Using the information obtained from the analysis and identification of the paint colours at the lowest level of the cross-sections, the John Cowane statue was eventually painted with similar lead based oil paints.

Research into costumes in Netherlands and Scotland 1620’s to 1640’s with communication with Curator of Costume and Art Historian at the Rijksmuseum in Amsterdam, Holland, and Senior Curator of Portraiture pre 1700 of the National Galleries of Scotland

There were several areas of damage with missing details, and some poor cementitious previous fills. The areas with damage could well have occurred at the same time as the artillery damage which we observed on the actual building to the decorative inscription panels to the façade of the Cowane’s Hospital. One previous repair had used fixings that were badly corroding and splitting the stone at the wrist. There were also areas of deterioration of the stone at the base/feet area of the statue.

Small areas of damage were left as historic damage, four  specific areas were either re-modelled in lime based mortar, and the missing hand was carved in a similar sandstone, after research.

We dismantled the statue, and following all conservation works the our workshop, installed the statue in his final position very similar to the original, re-using the one original fixing hole in the back of the niche and in the statues shoulder.

Full reports and detailed diagrams are held with the Architect BTA and the Main Client Patrons of Cowane’s Hospital Trust. Through-out this project and when making specific decisions we worked very closely with BTA, who visited the workshop regularly. 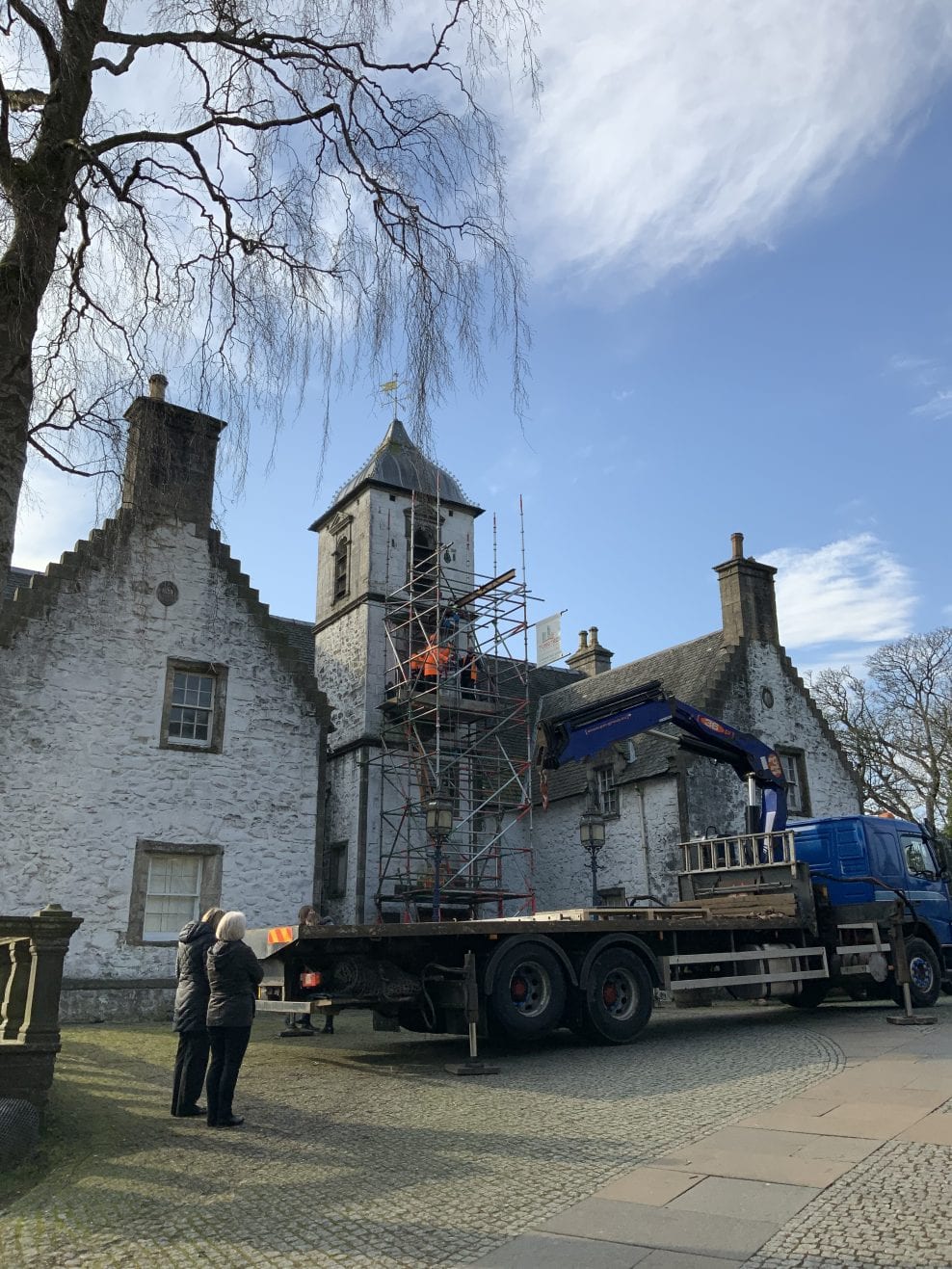 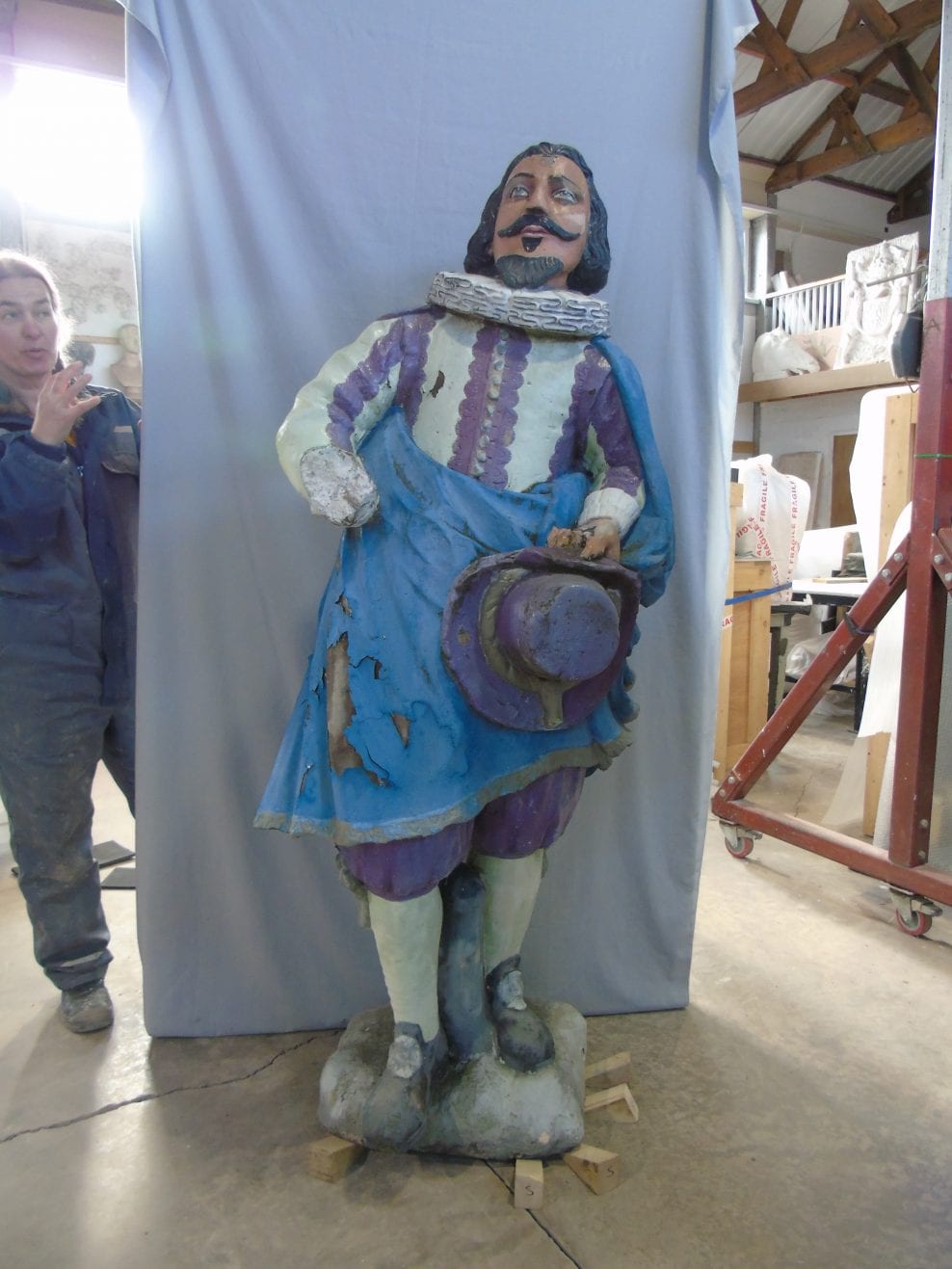 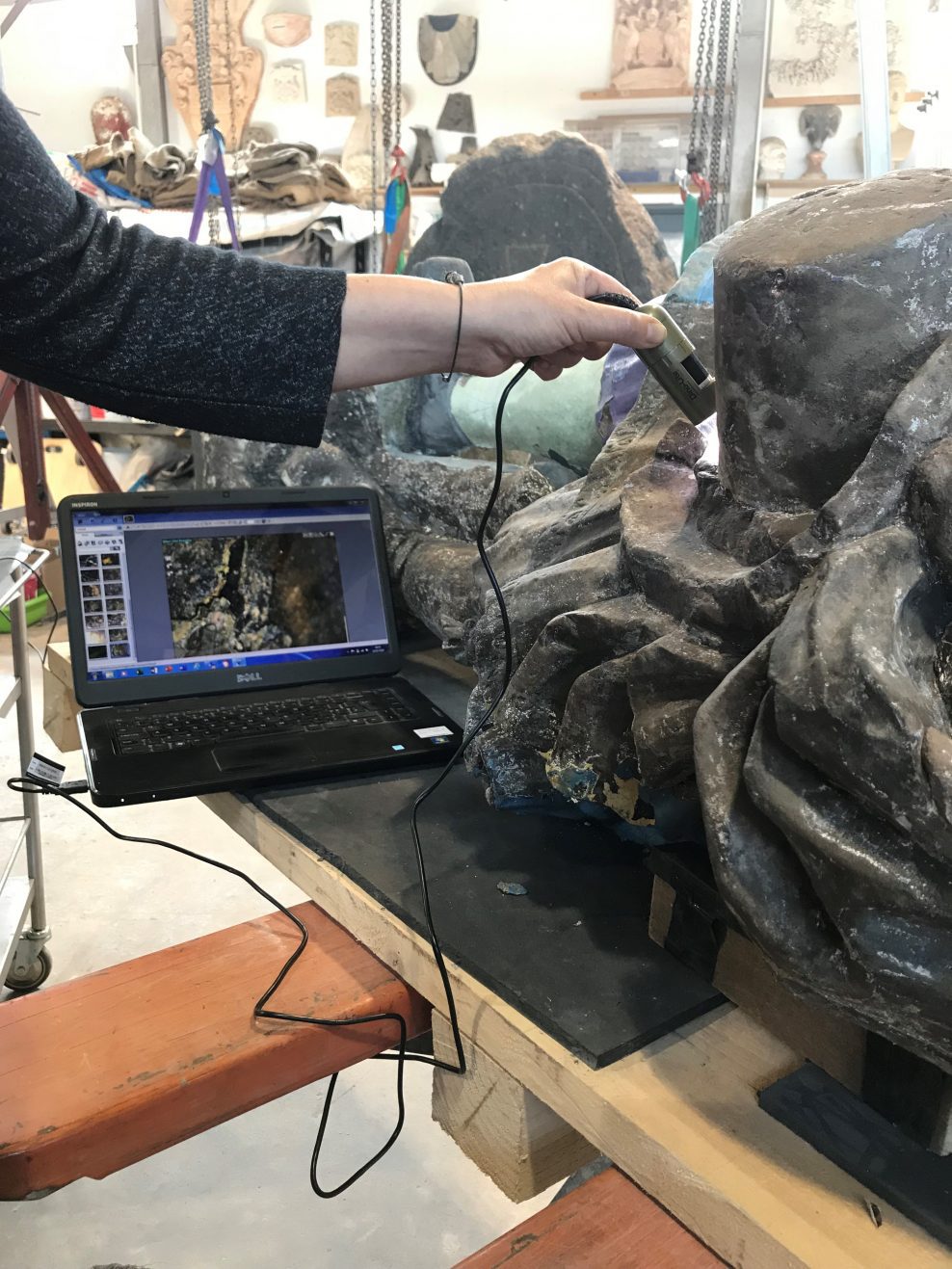 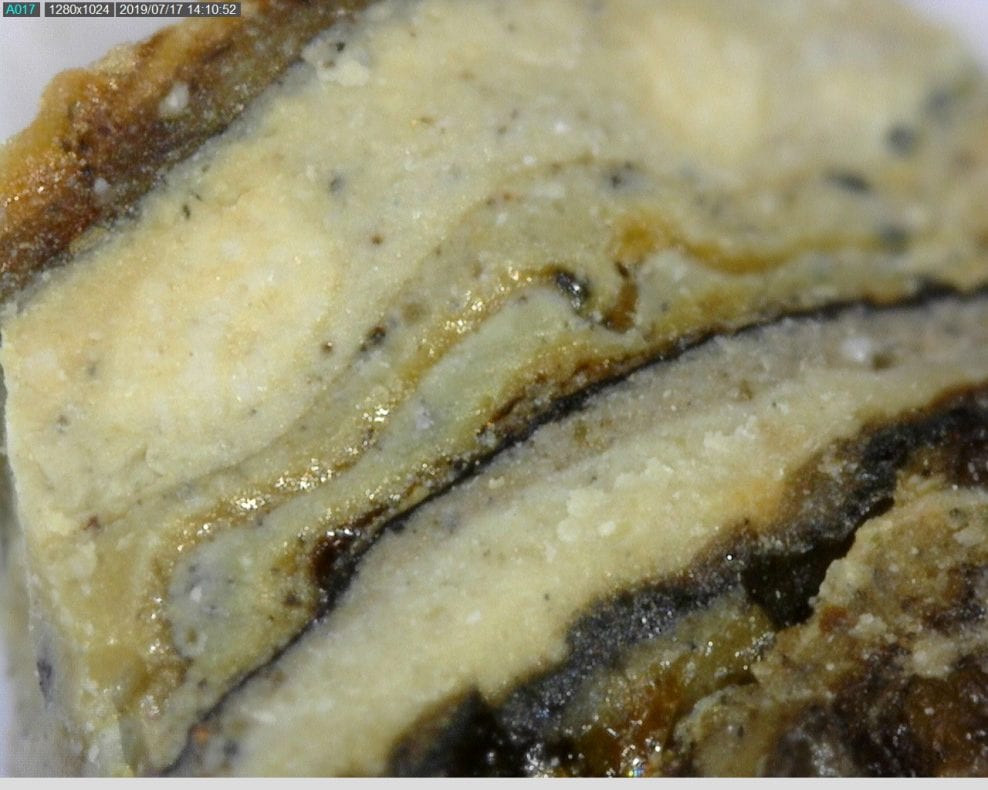 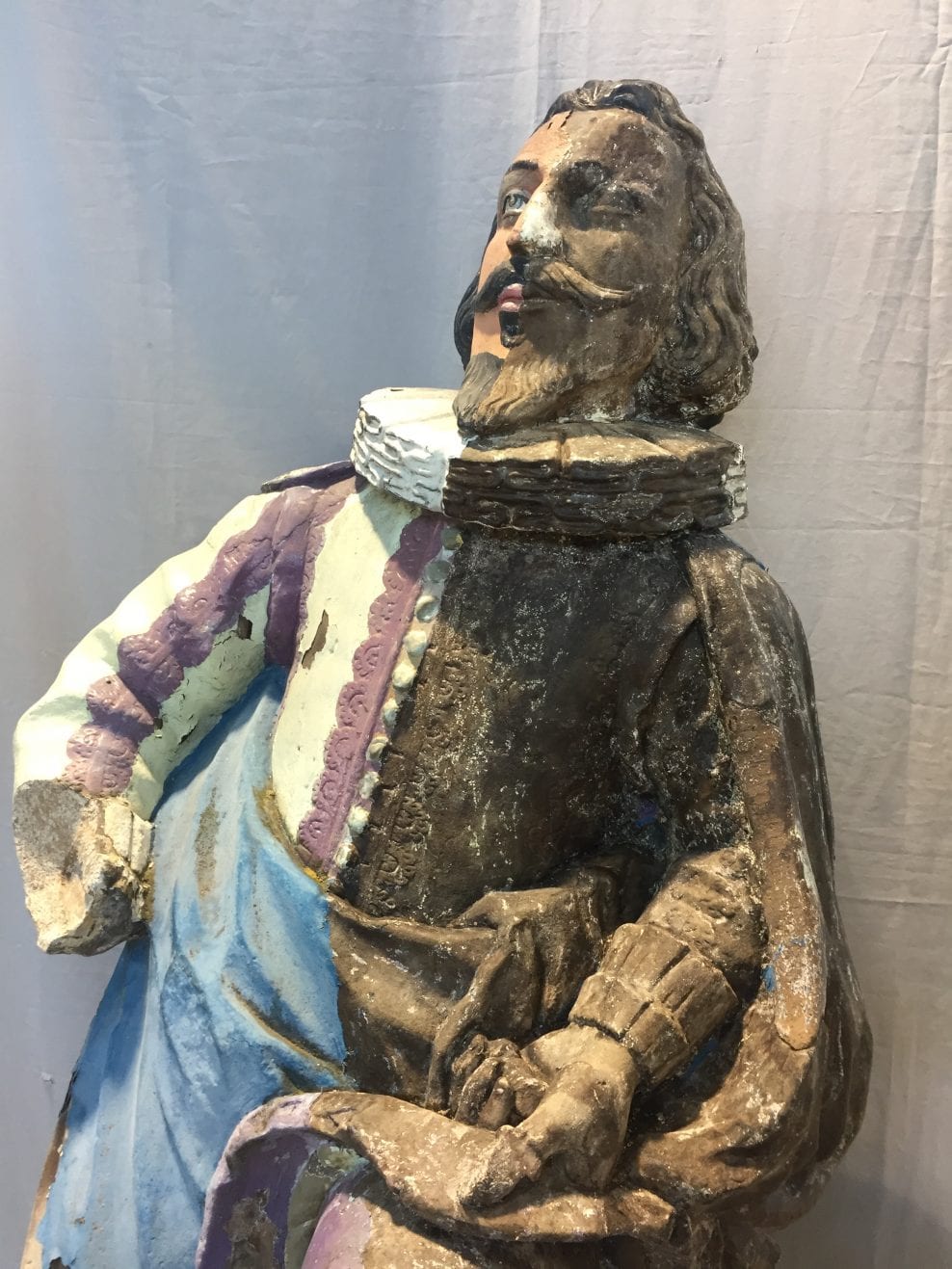 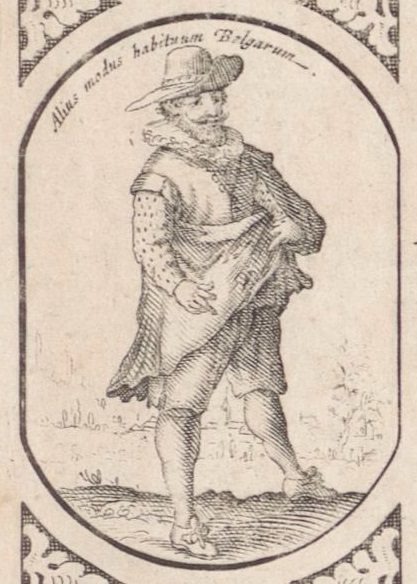 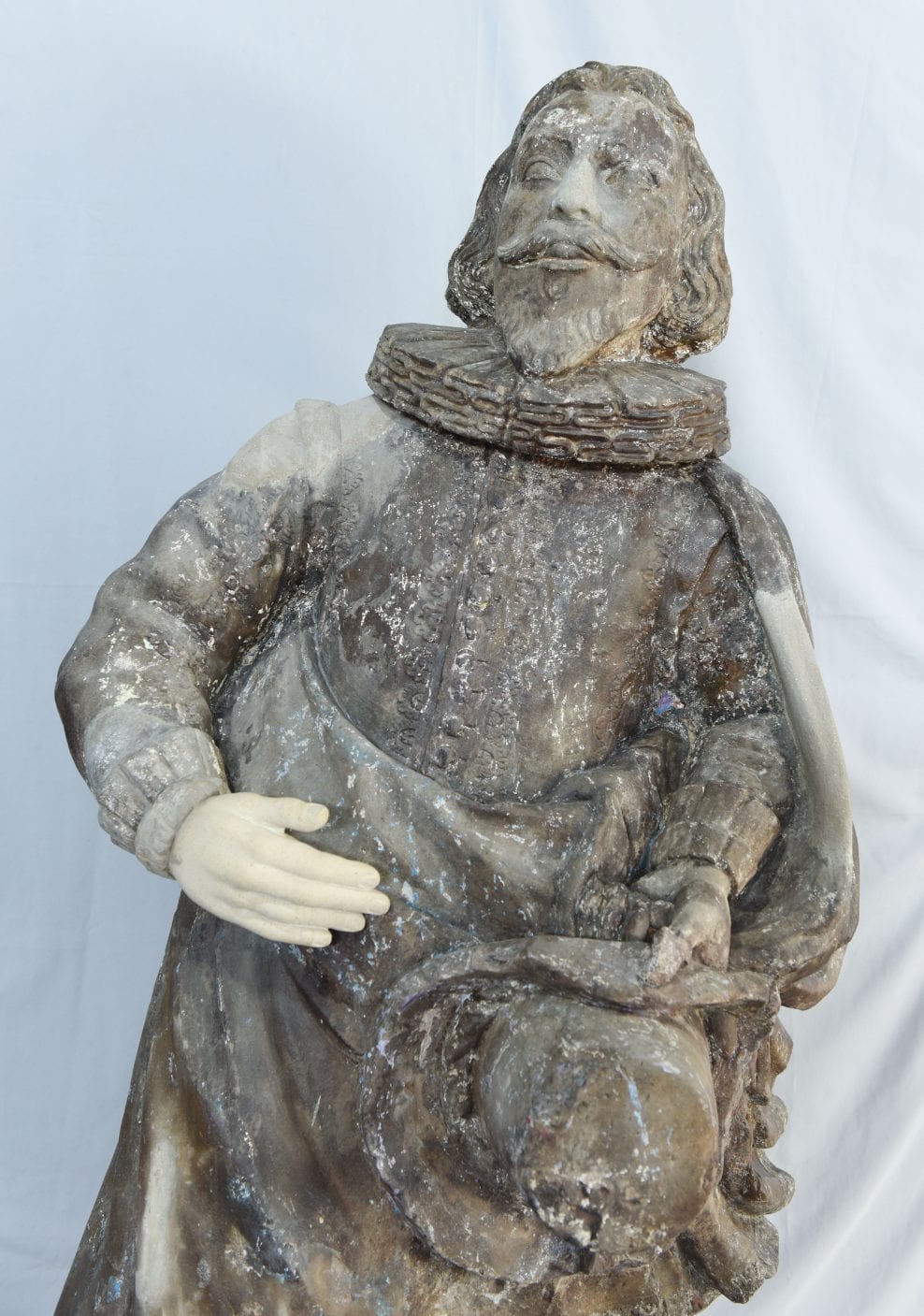 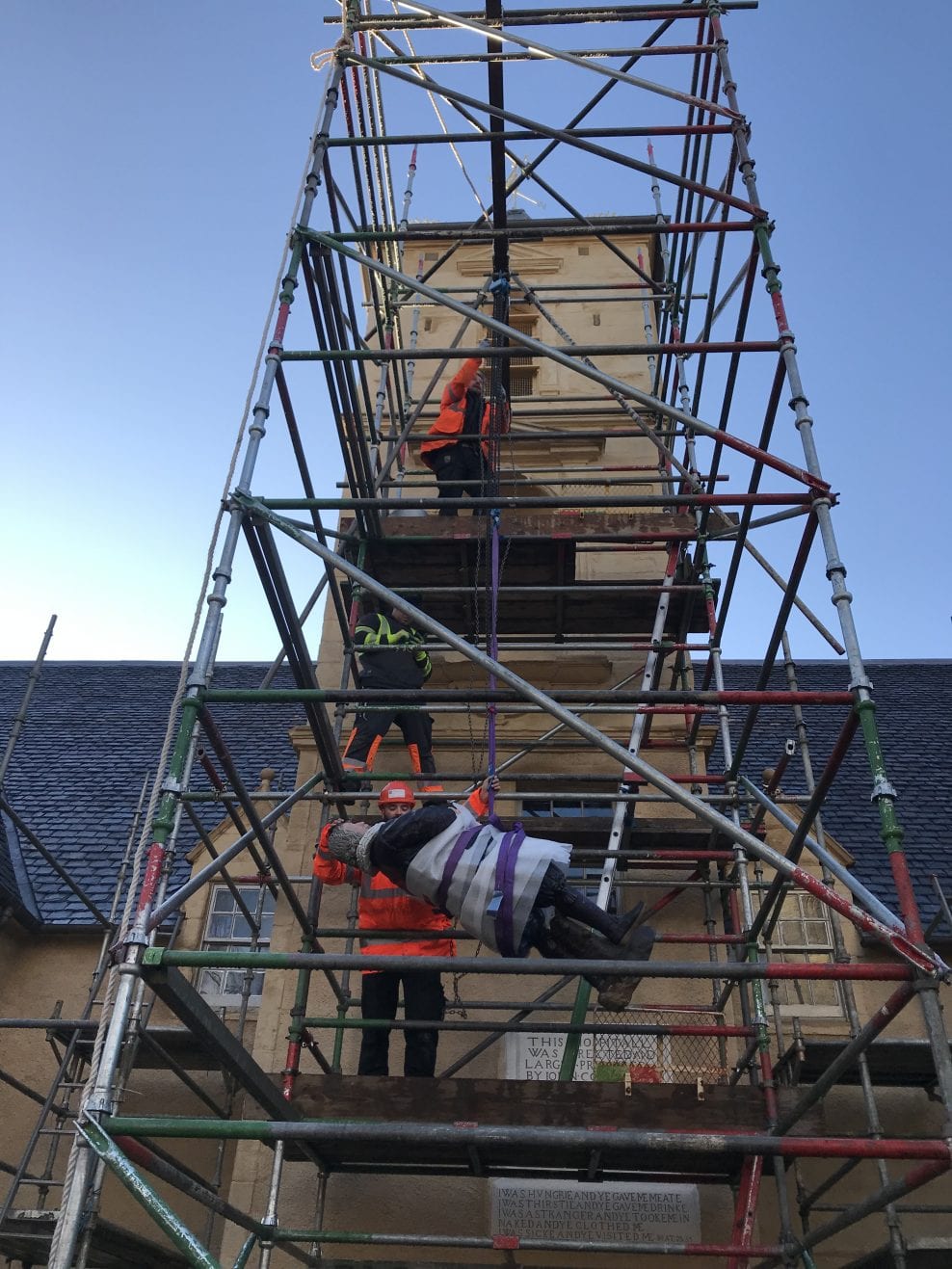 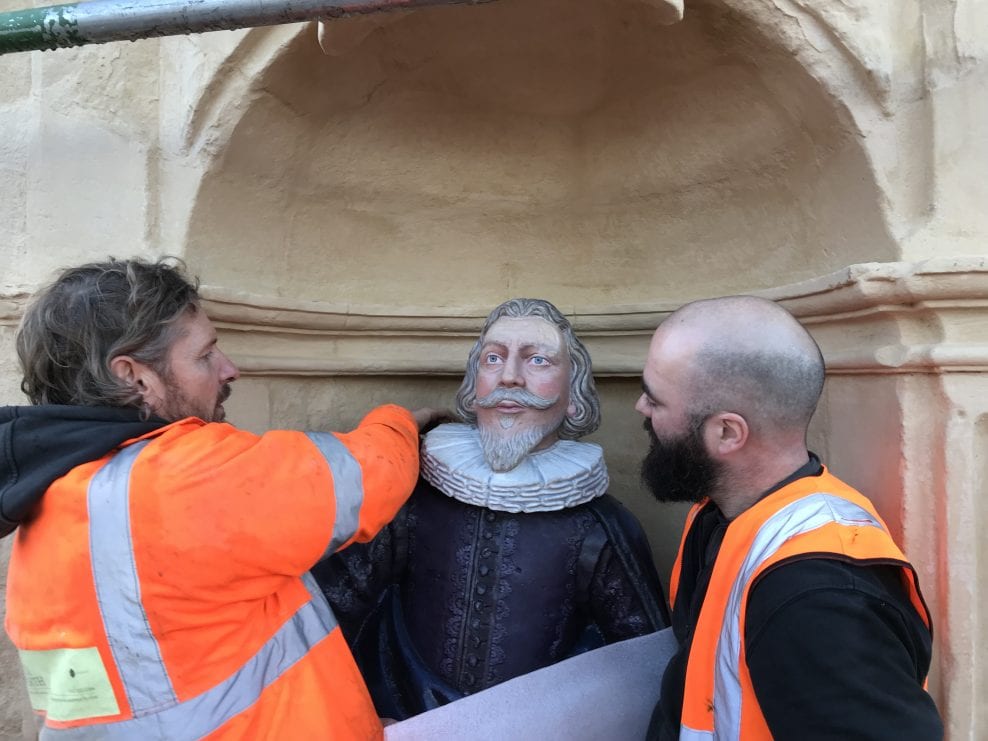 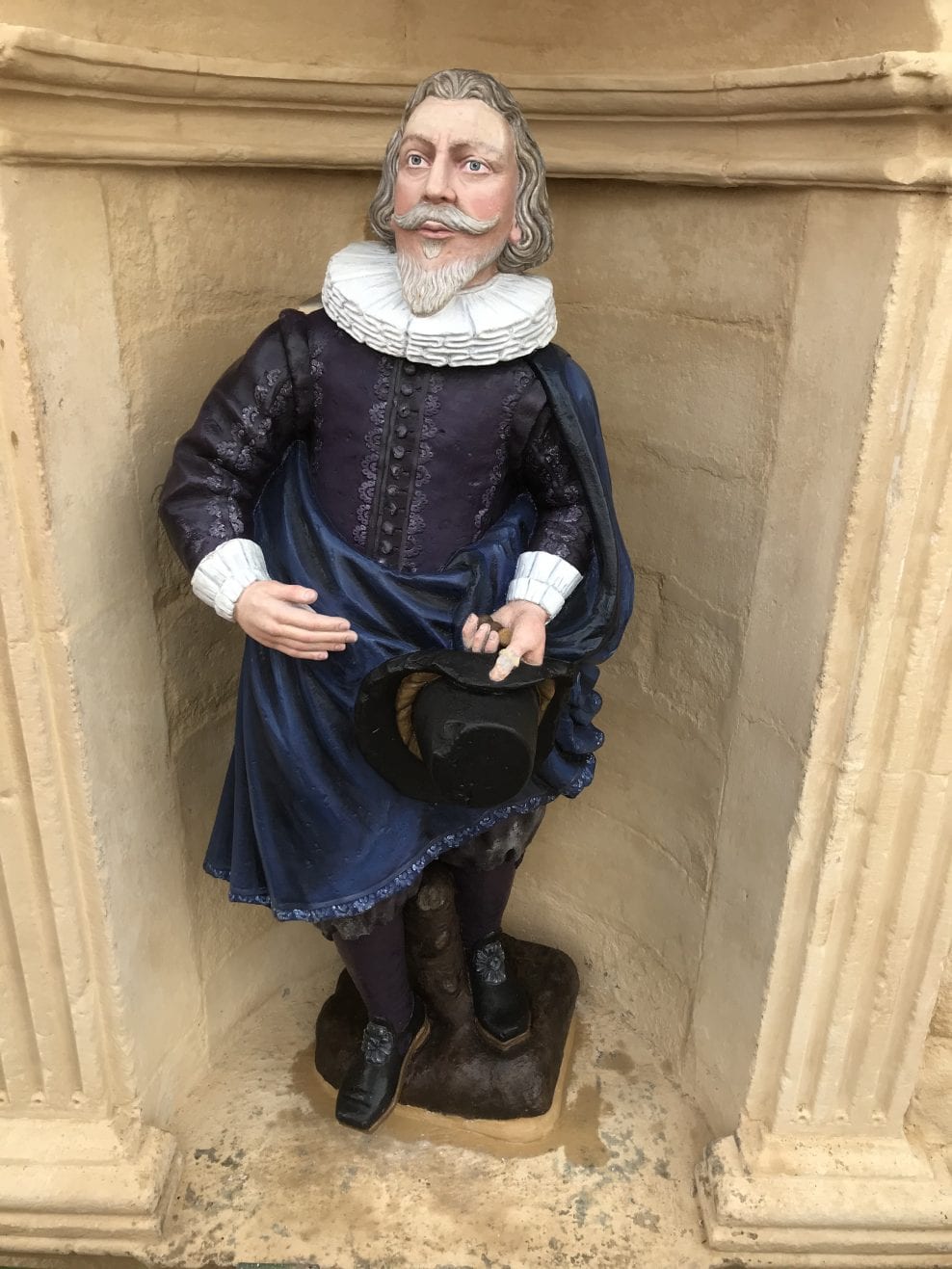