Originally built in 1853, the ‘Vulcan’ was situated in the Adamsdown area of Cardiff, it’s original address was Whitmore Lane Newtown.
The name refers to the Roman God of Fire, and alludes to the nearby ironworks.
Within walking distance of Queen Street station , and nearby the gaol, it was in the suburb’s working class area.
The buliding was substantially rebuilt in around 1900, and refurbished internally in 1914, which was when it aquredit’s famous green and brown tiles.
The pub retained its brown stoneware urinals even after it was again updated in the 1950’s.

In 2009 the Vulcan finally closed; In July 2012, shortly after the demolition of the Vulcan had begun,building contractors and preservationists were deployed by the National History Museum to start deconstruction of the building by hand, to allow brick by brick movement to St Fagans Museum, in order to relocate it as a working hostelry.

The initial assessment was that all the pieces needed surface cleaning, that one of the trays was broken in two, and that there were a number of chips and surface losses. Following the unpacking of the pieces, the amount of damage was found to be far more extensive. Of the sixteen parts of the urinals, only one was undamaged, though that had significant accumulations of cement and paint residues. Damage ranged from minor to extensive/severe. Additionally three sections had been removed when a new flush system was installed and these were now missing. 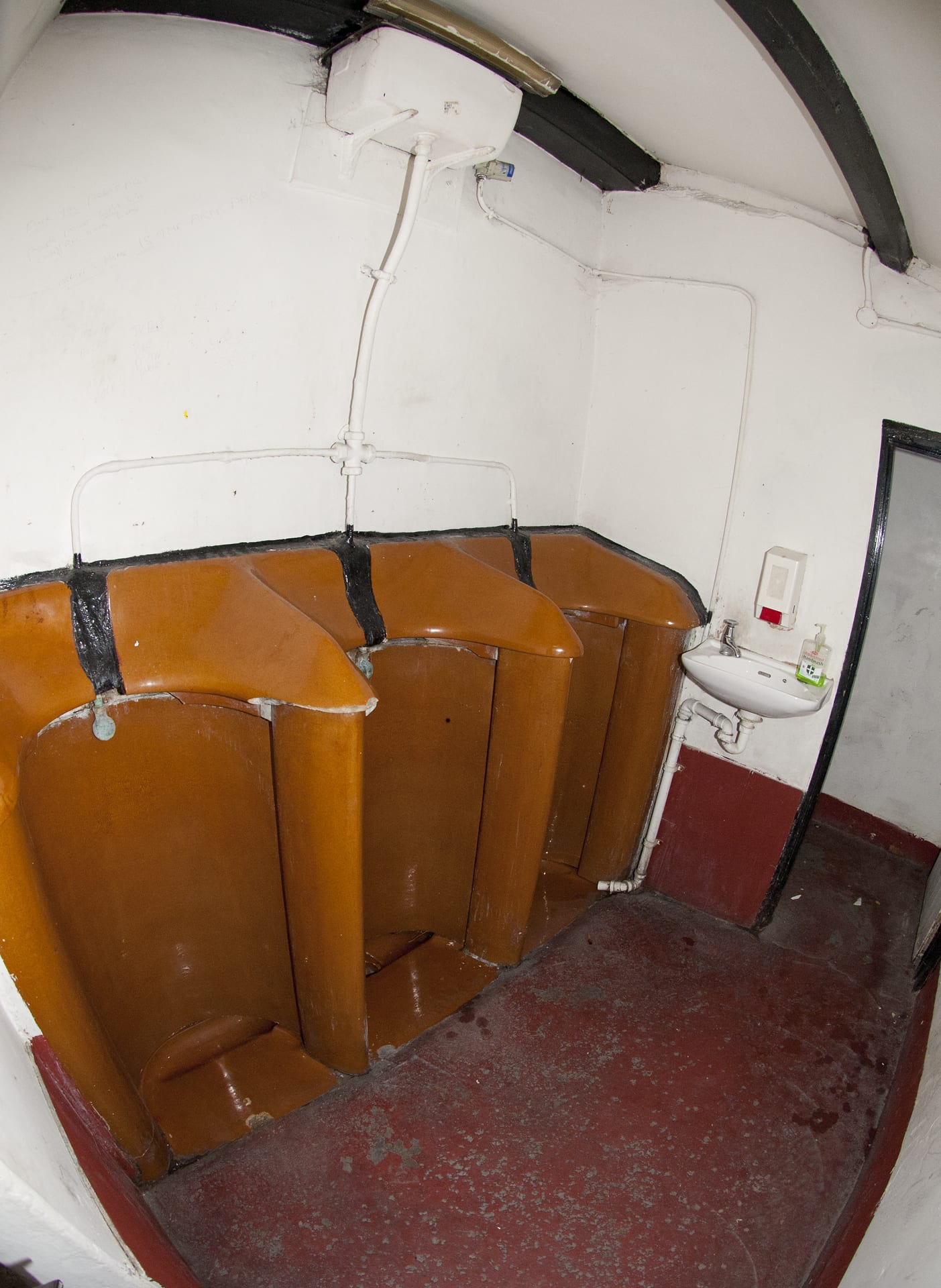 The black painted areas, are where three sections were removed to accomodate the new flush system, which were bedded in cemant after smashing out sections of the old; other damage is also visible. 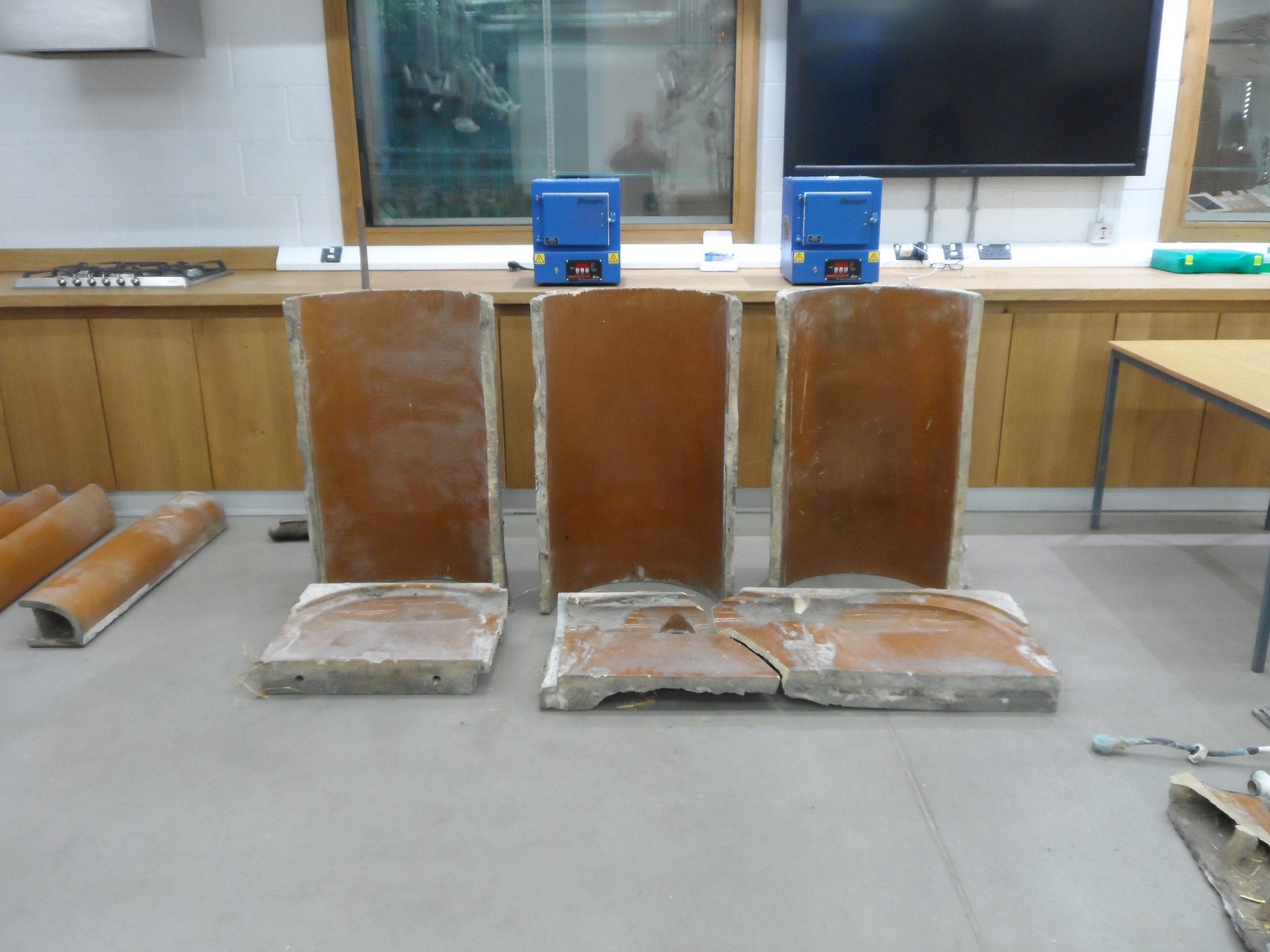 Some of the sections of the removed urinals prior to treatment.

Damage to the tray can be seen, the centre tray is broken in two with areas broken out and missing. 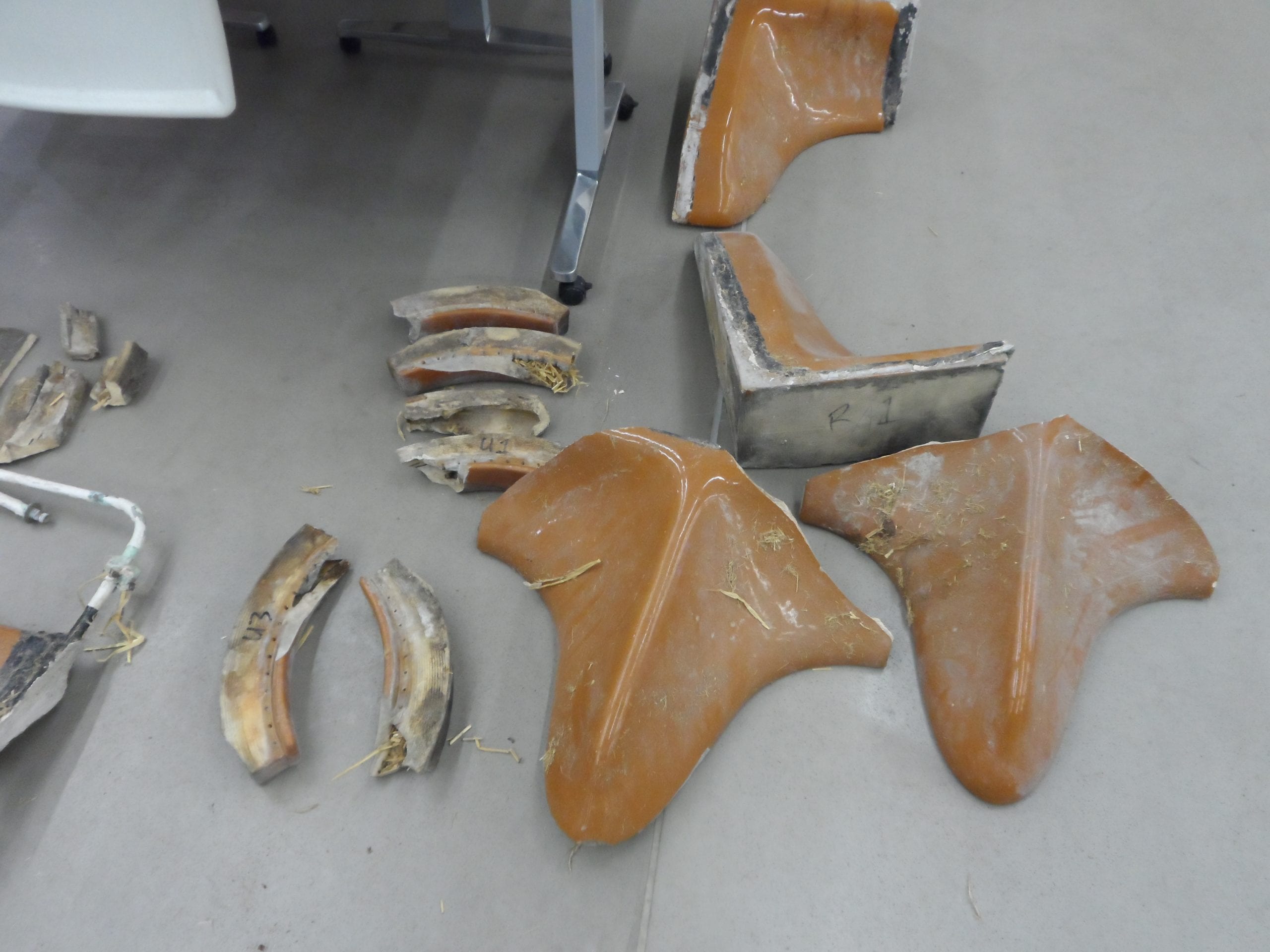 Sections of the urinal covers and flush systems. 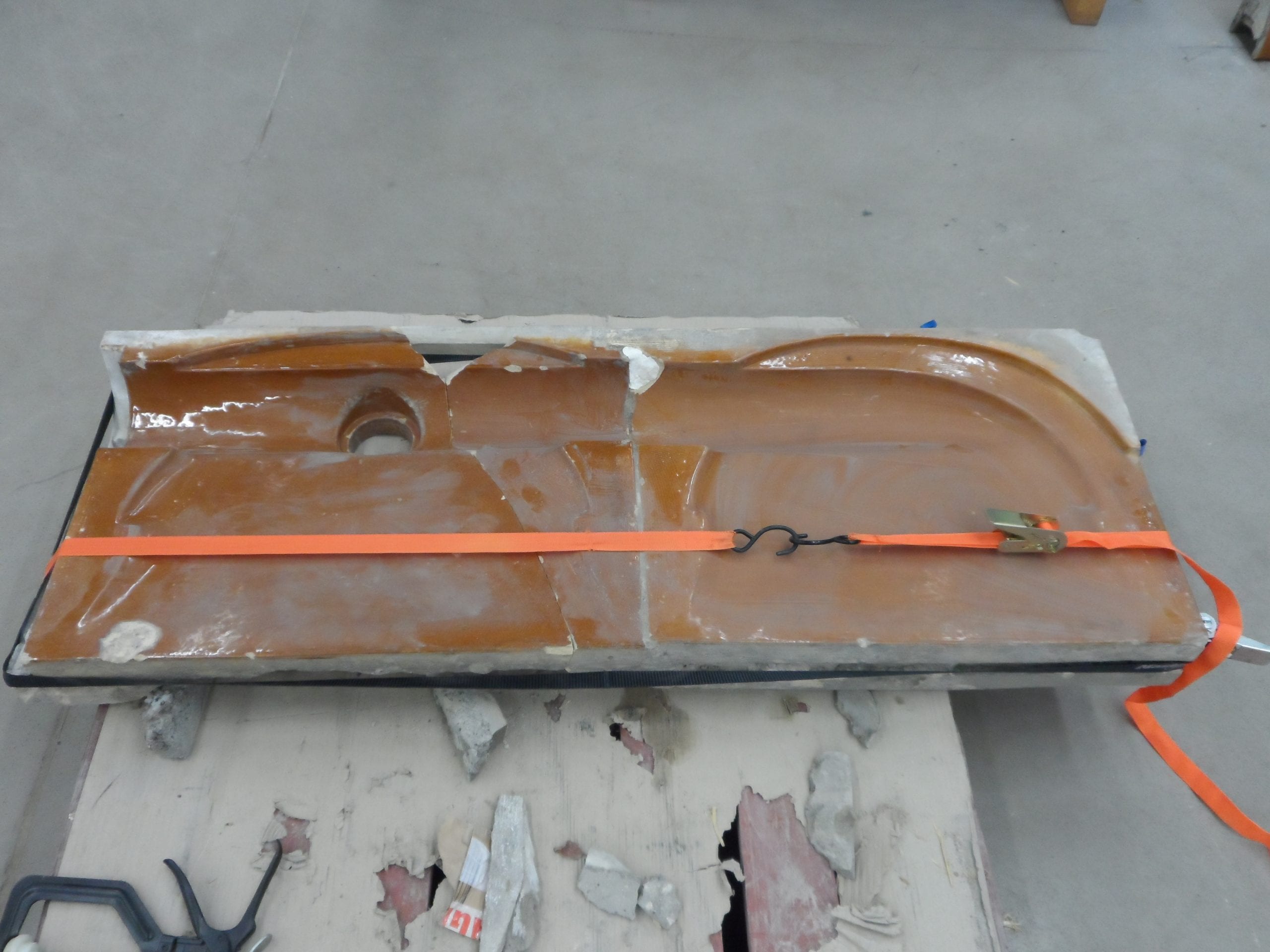 Bonding the tray: having removed old concrete residues, the break edges were cleaned before bonding with an epoxy resin;the resin had which was colour matched to the tray, had a working time of about 40mins at room temperature curing time was 24 hours, and it reached full harness after 7 days. Ratchet straps were used to tension the sections in position, and wedges used to achieve the correct alignment.After the adhesive had cured, the base was turned over and high tensile steel reinforcing bars were bedded in an epoxy acrylate resin, to add strength. 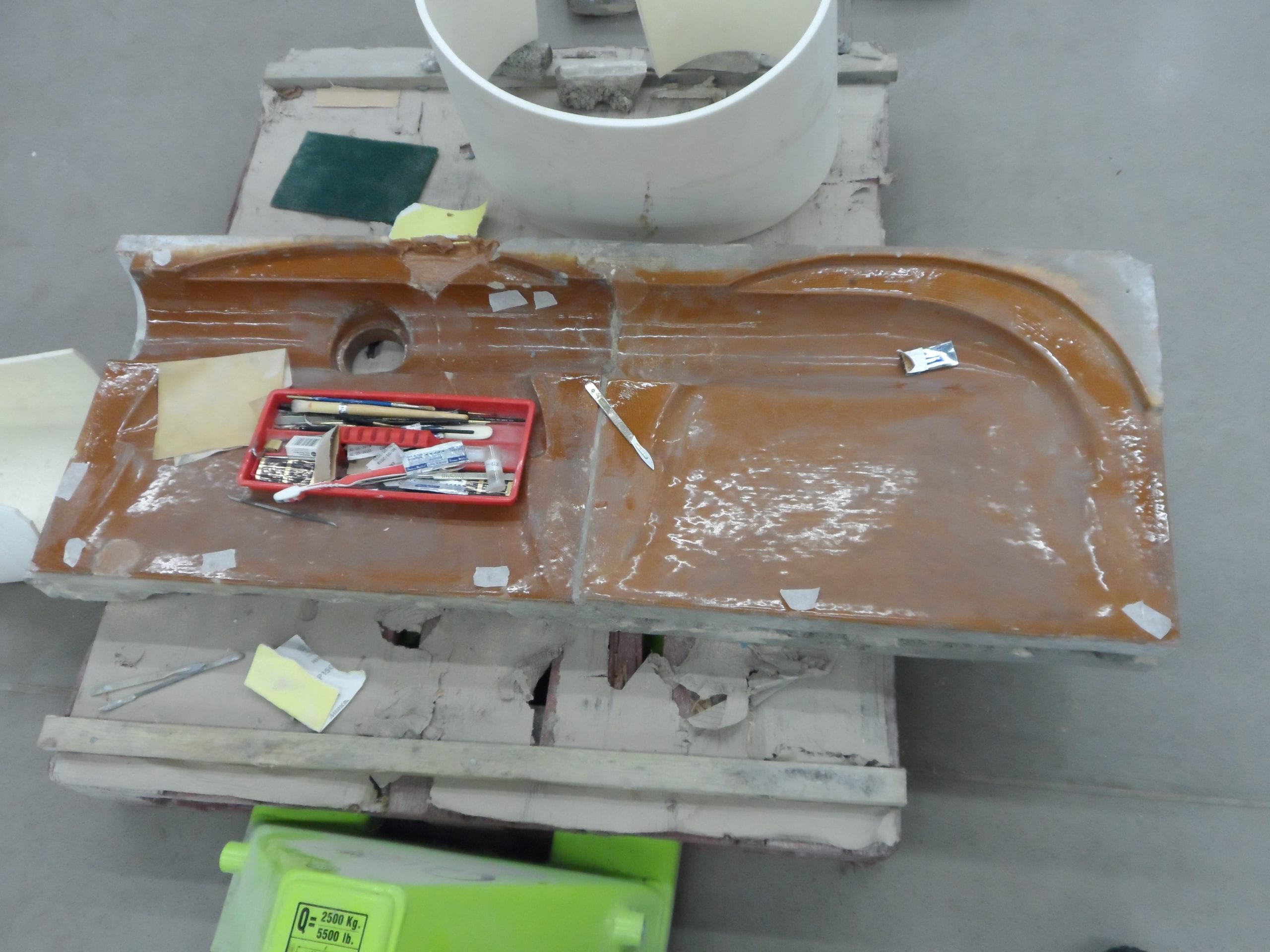 The start  of the filling process: this was done in stages as the resin had a tendency to ‘slump’ when in thisk sections. 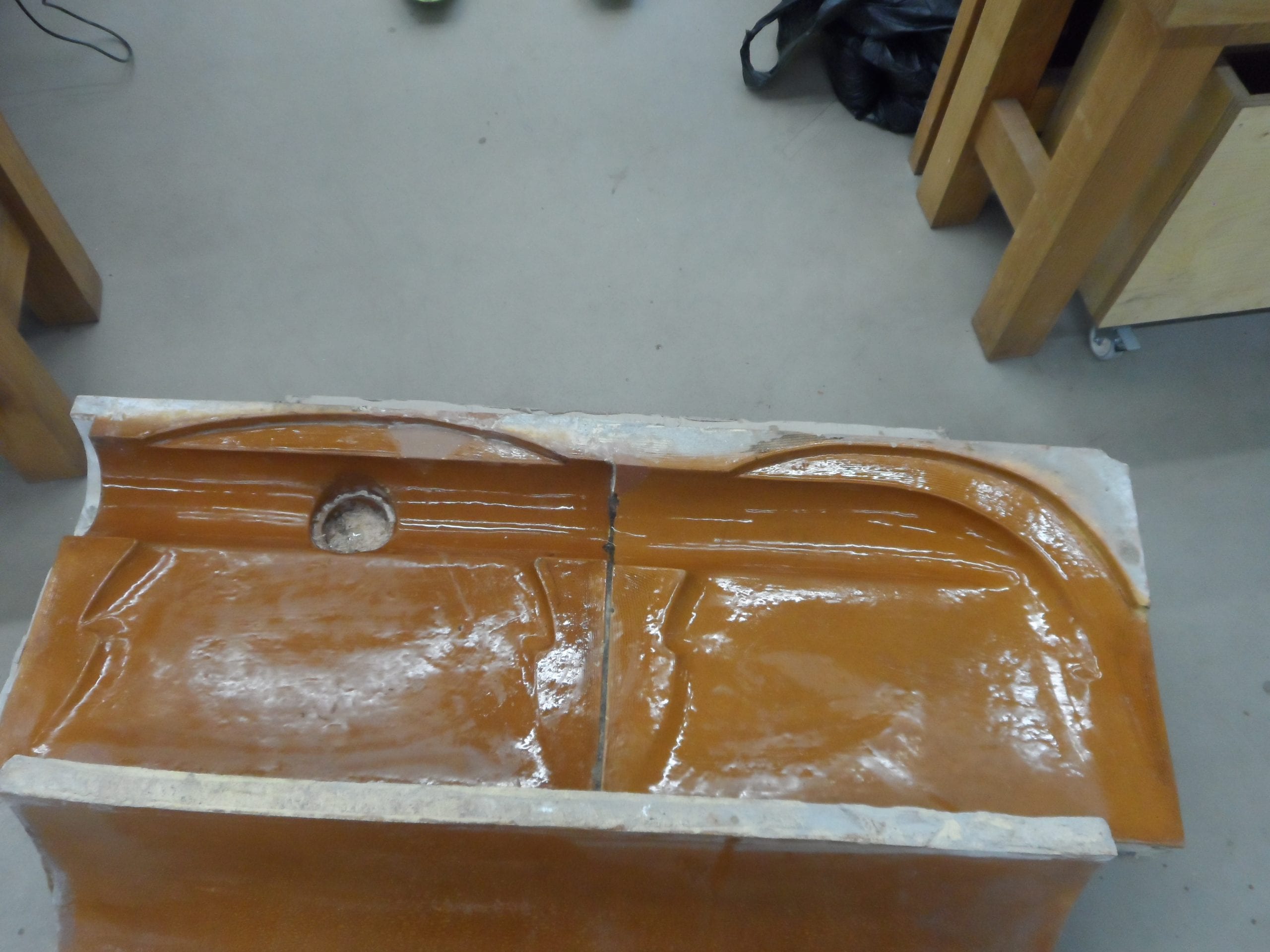 The  tray after bonding and filling. polishing of the fills will take place after the resin has cured fully after 7 days 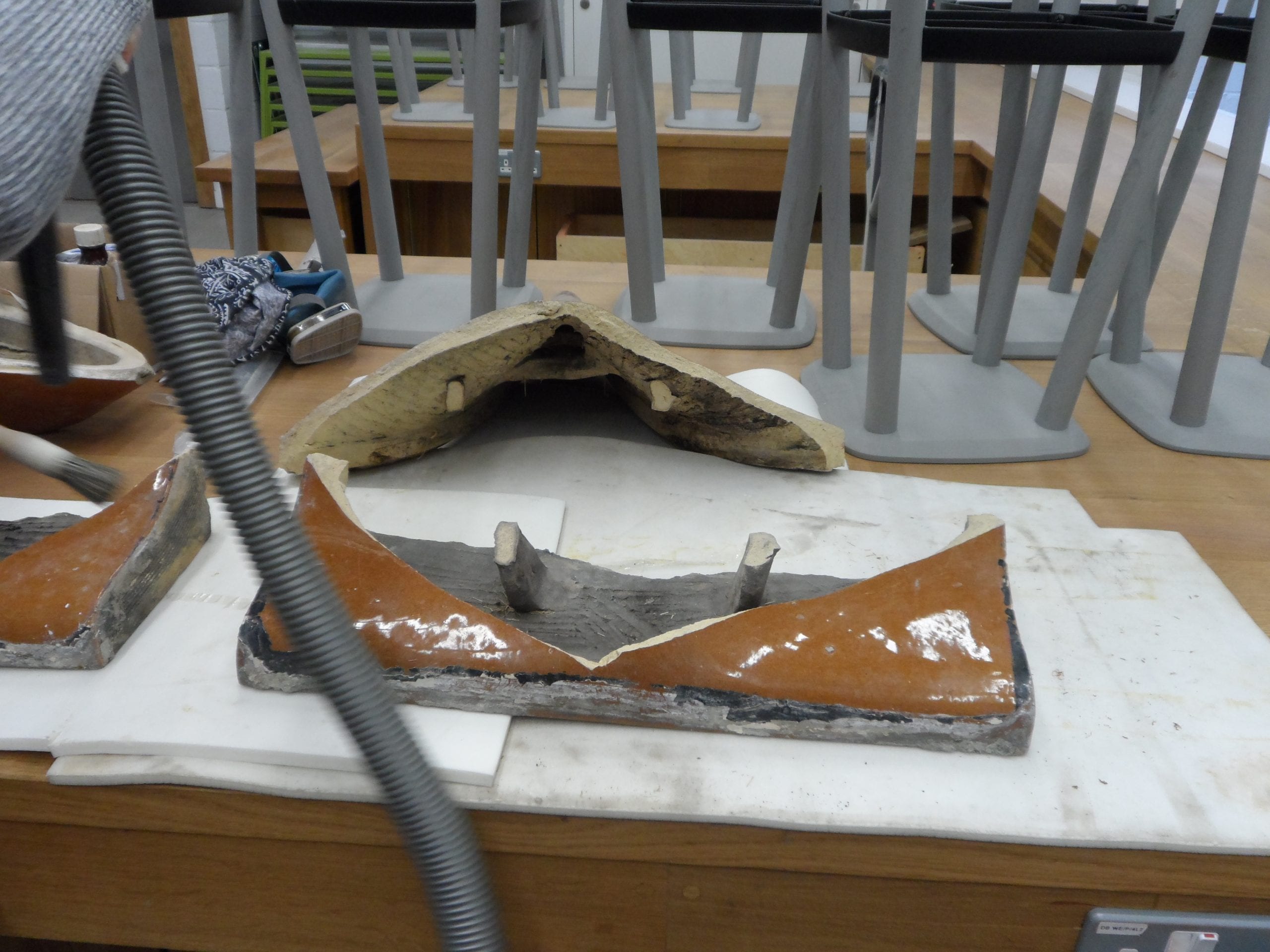 The damage to one of the ‘caps’. 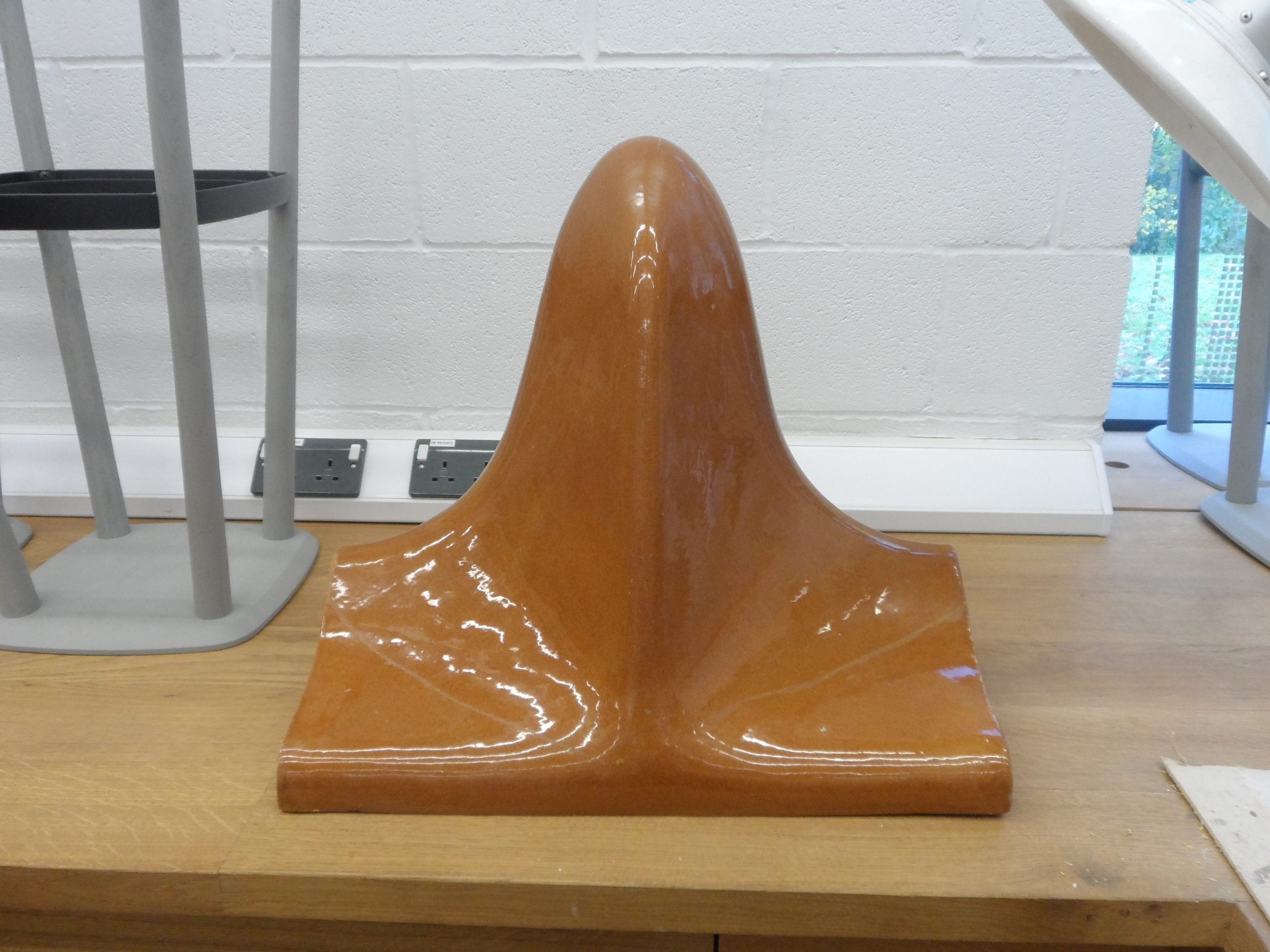 The cap after treatment 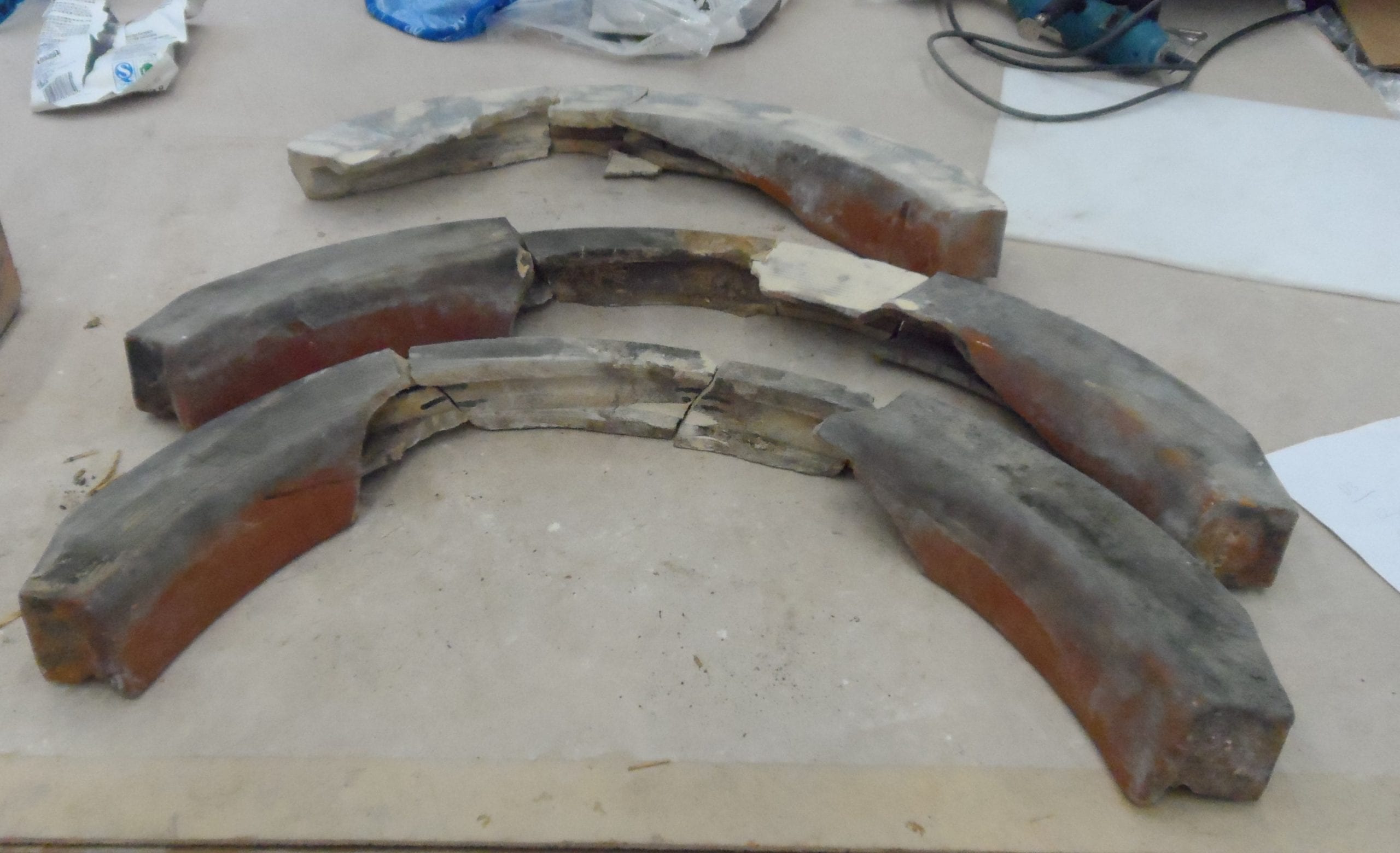 Sections of the flush units prior to treatment:the unit at the back has approximately 25% missing.
All of the units have had the central sections smashed out in the past to facilitate the replacement of a flush system.
As part of the treatments it was necessary to create a chamber within the units, so that they would function as originally intended. 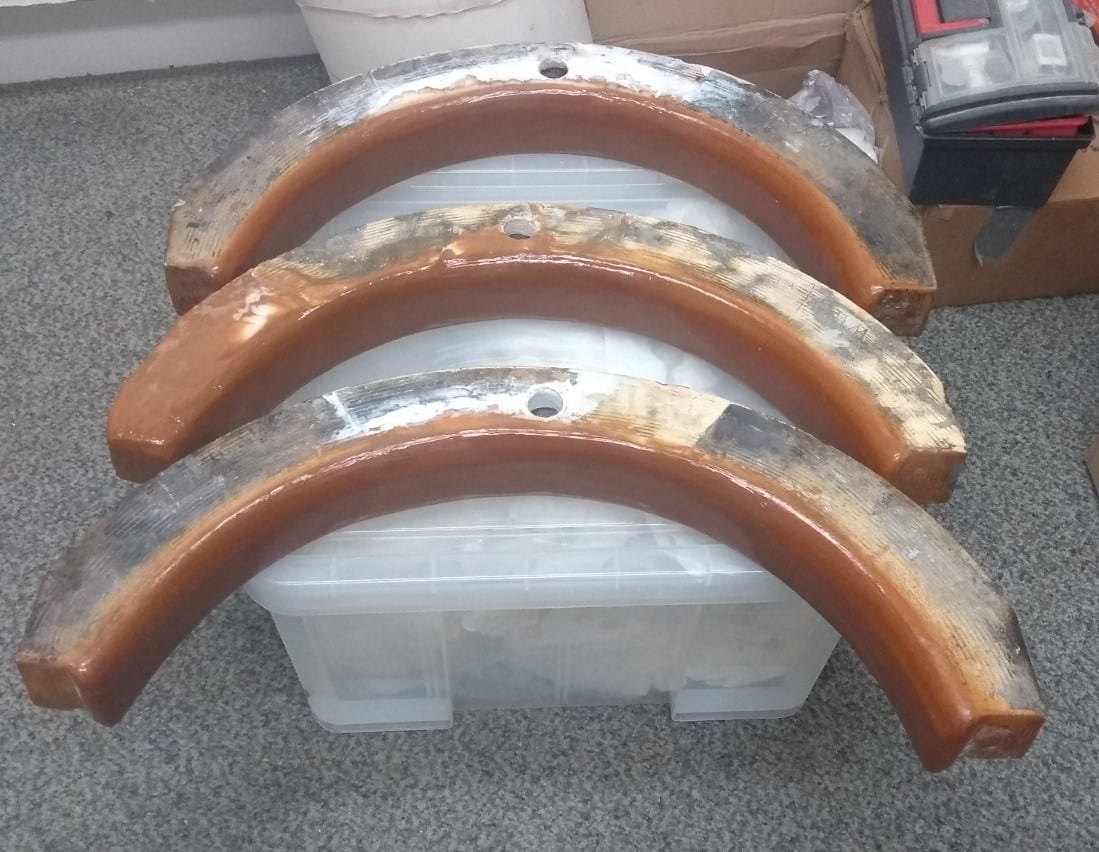 The units after reconstruction: all visible surfaces were treated with coloured fills, as opposed to retouching
The project at St Fagans is on-going.
Reconstruction of the Vulcan is underway, https://www.bbc.co.uk/news/uk-wales-51191469
The next stage, will be the reconstruction of the missing ‘caps’ followed by the installation of the urinals in their old home once the building is completed. 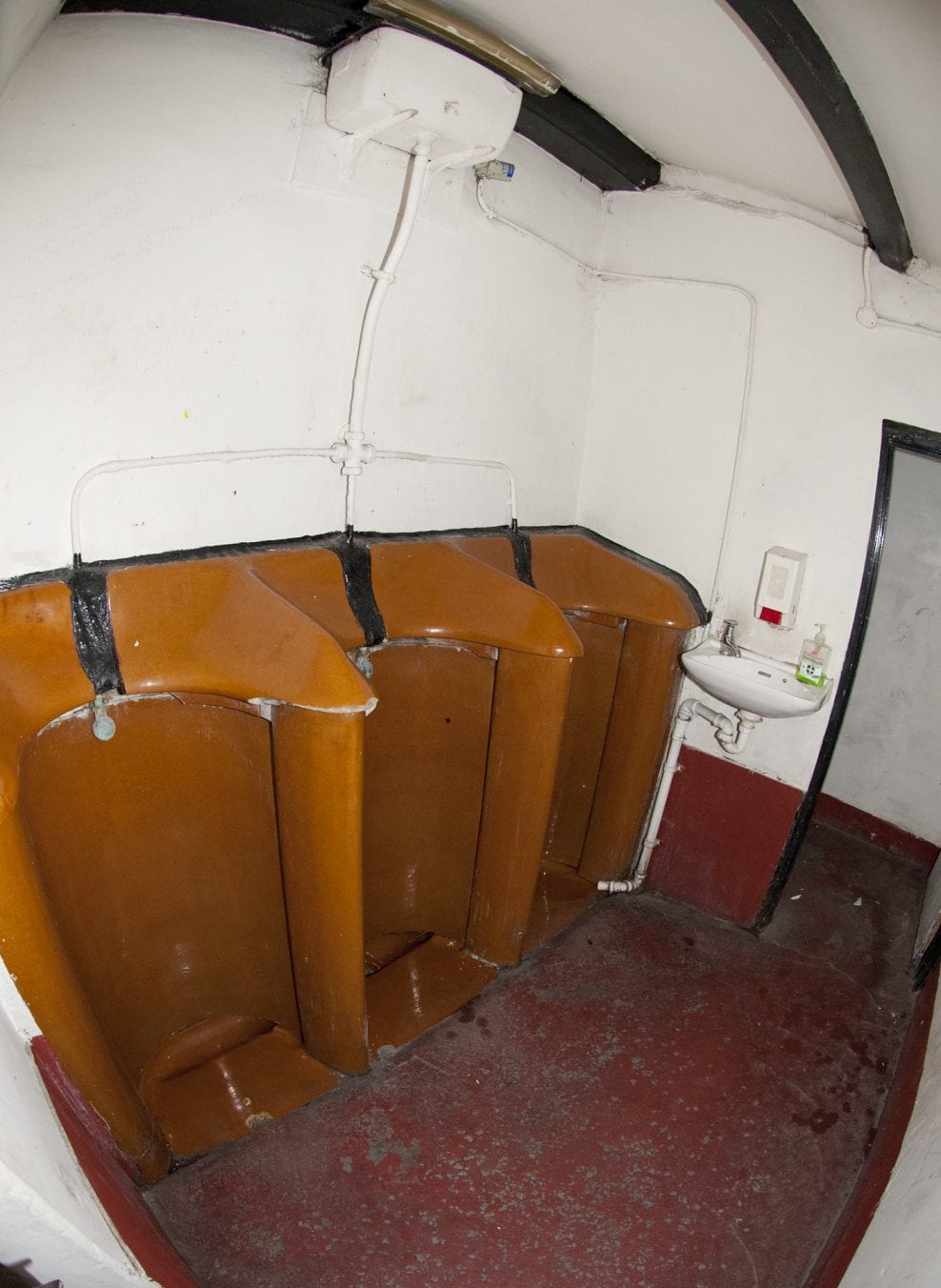