William Cavendish, 1st Duke of Newcastle, by Sir Anthony Van Dyck came into the studio for conservation treatment prior to exhibition.

Condition of the Portrait Prior to Treatment

When the painting arrived in the studio it was covered is a significant layer of sooty surface dirt, this layer was particularly heavy along the bottom edge where it had been trapped between the painting surface and the frame rebate. The back of the painting was also covered in this sooty dirt and a significant amount of dust and debris had collected behind the lower stretcher bar member.

Below the dirt there were at least two layers of natural resin varnish, one having been applied while the painting was in its frame and so not extending to the edges of the painting, this was particularly evident when the painting was viewed in ultraviolet light. The varnish layers had oxidised and trapped dirt at the surface, meaning that these upper coatings were now dark, discoloured and visually disturbing.

In normal light it was possible to see a number of old damages that had been repaired and over-painted. In many instances the later over-paint had discoloured. The sky had been heavily abraded at some point, the tops of the canvas weave were visible throughout this area and it had also been crudely over-painted. There were also large areas of excessive over-paint in the drapery, William Cavendish’s black costume and most of the floor area.

The original fine linen canvas had been lined onto a course hessian fabric, formed of two pieces with a seam towards the right edge. The hessian fabric and the glue-paste adhesive used for the lining had both perished and were not providing adequate support for the original canvas. The stretcher also had inadequate strength to support the full length portrait. The stretcher bars were thin and the joints were overextended. There were extremely large openings and the members had begun to distort and roll inwards, towards the front of the painting. 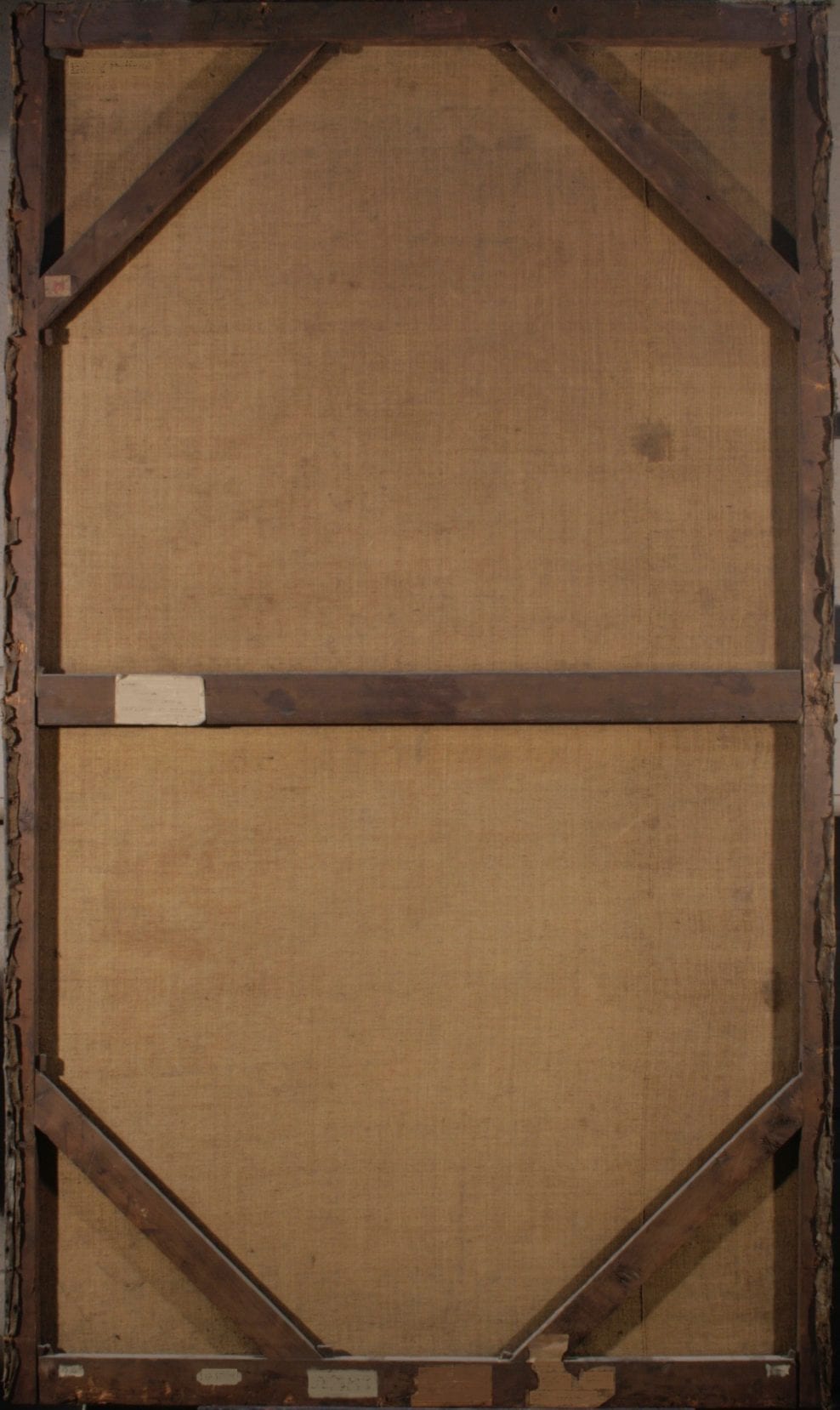 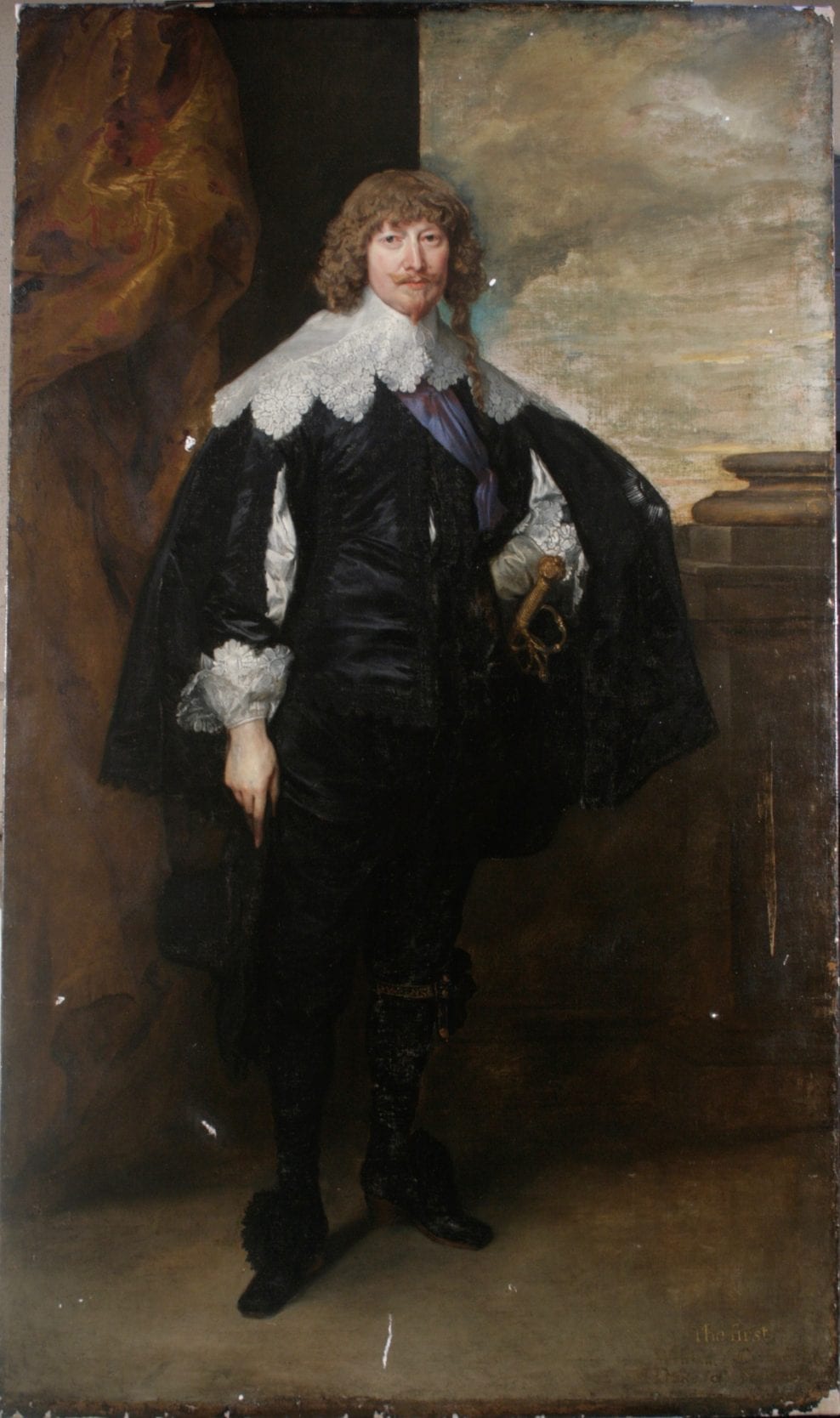 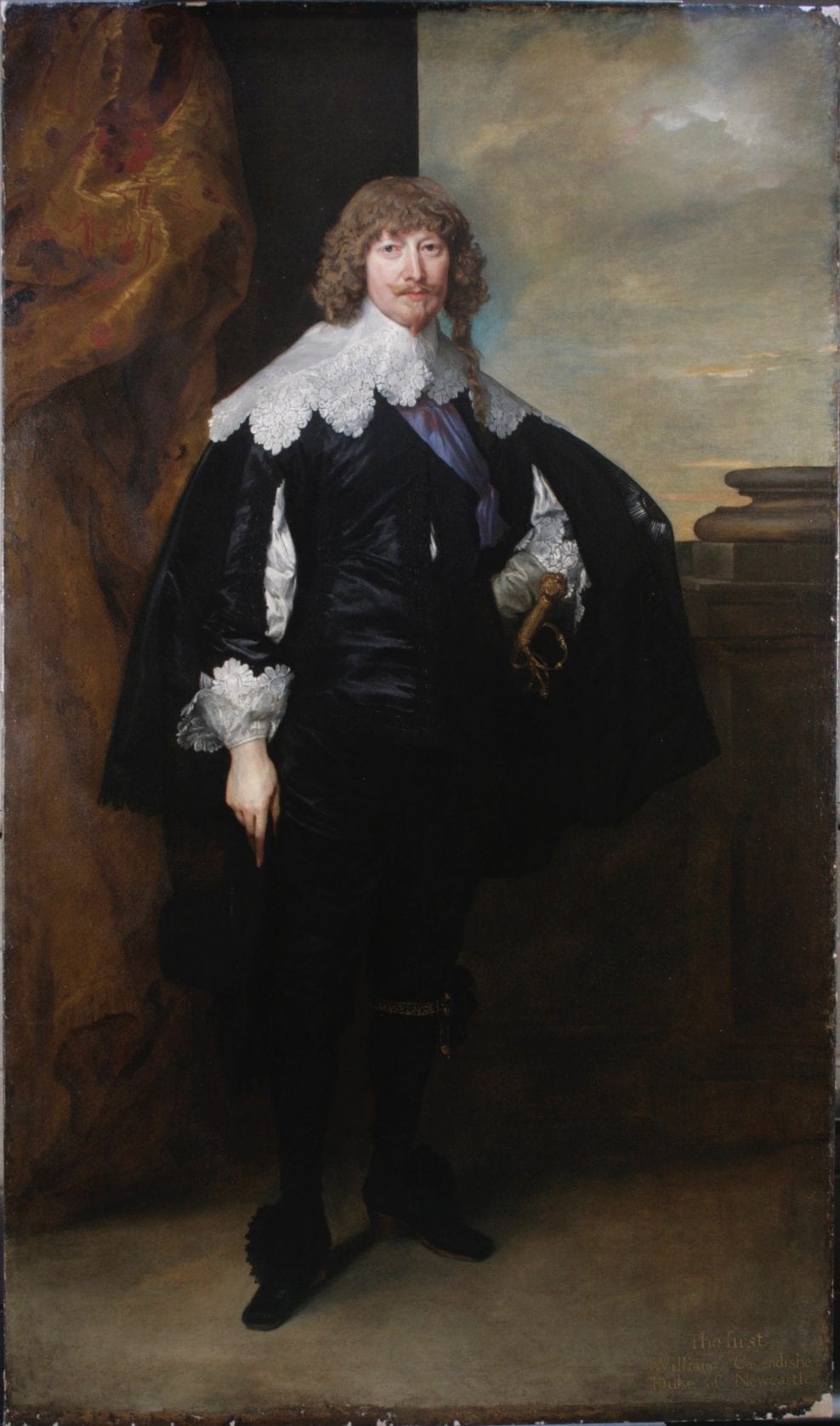 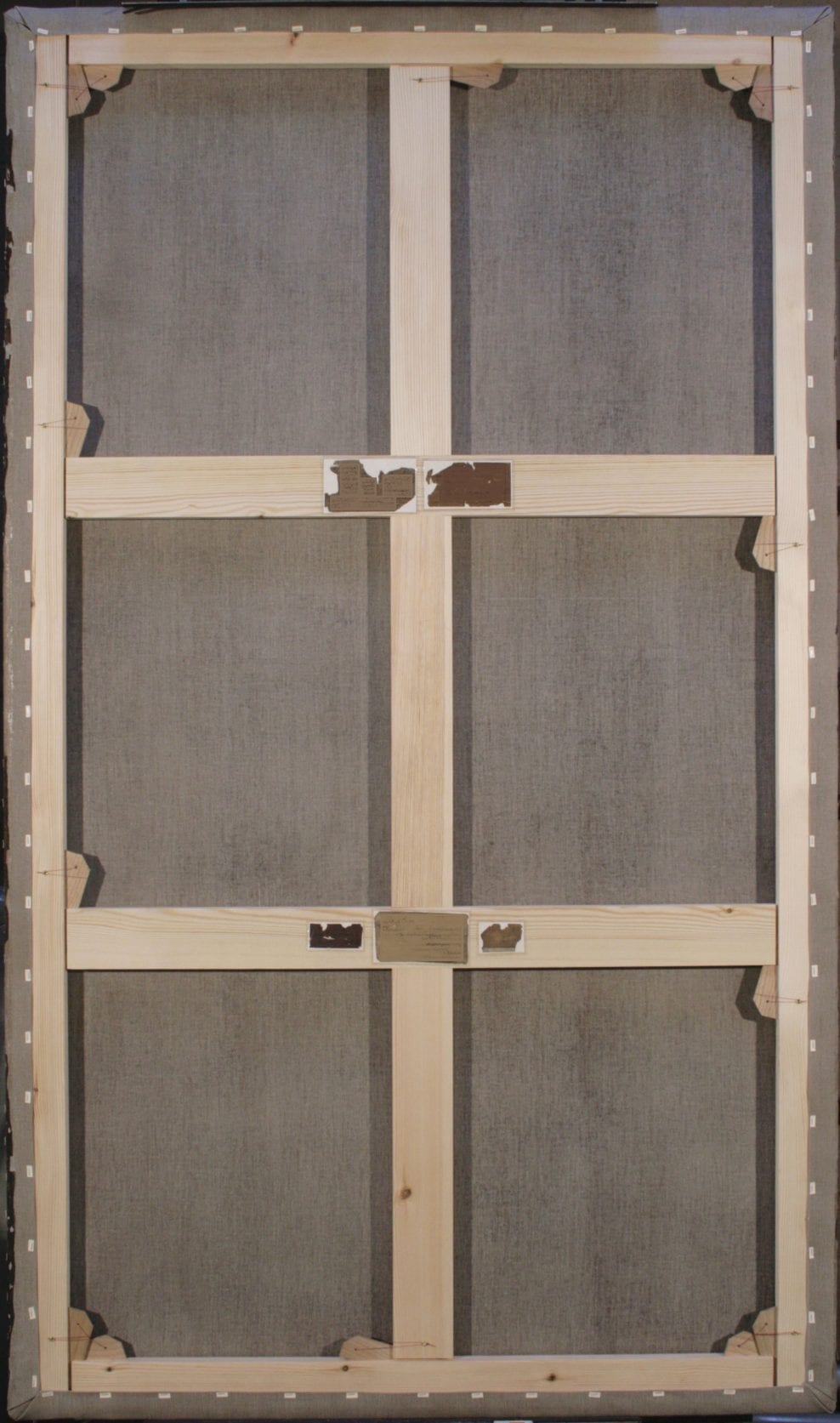 Loose debris was removed from the back of the painting and behind the lower stretcher bar using a stiff brush and low vacuum suction. A soft brush was used on the painting surface and an aqueous cleaning solution was then used to lift as much of the surface dirt as possible.

The discoloured and oxidised varnish layers and most of the over-paint were removed using tailored solvent mixtures. In many cases the over-paint had extended across large areas of original paint, its removal revealed the finer nuances of Van Dyck’s paint application and modeling. Removal of over-paint in the pillar at the side of William Cavendish revealed a large drip mark etched into the original paint. This was directly below the heavily abraded sky and was probably caused by the same corrosive solvent that had caused damage in that area.

It was extremely difficult to separate the over-paint in the sky from the damaged original below. It was decided to thin the over-paint as far as possible in this area and to resolve the remaining uneven appearance during the retouching stage of the painting’s treatment. This decision was reached after discussions with the owner’s Collections Manager. At this stage the decision was also made to remove a section of lace from William Cavendish’s left shoulder. This section was a later addition that had been more crudely painted, altered the drape of the collar and also covered the original design, which was in good condition below.

The decision was made to remove the failing lining and to reline the original canvas onto a newly prepared linen canvas. As the existing stretcher was also inadequate a more robust stretcher was ordered. A temporary varnish was applied to the painted surface and it was faced with tissue to protect it during the structural treatment. The old hessian fabric and desiccated adhesive was removed from the back. Old tears and losses to the original canvas were repaired and the painting was lined onto its new support using a heat activated adhesive on a thermostatically controlled lining table under vacuum pressure. The painting was then attached to its new stretcher. Labels that were present on the original stretcher were removed, cleaned, lined, put in Melinex pockets and attached to the reverse of the new stretcher.

The tissue facing and temporary varnish were then removed from the front of the painting. A new isolating layer of varnish was applied and any losses were filled and textured using a chalk/gelatine fill material. All losses and abrasions were then mimetically retouched using dry pigments mixed in a synthetic resin to achieve an aesthetically coherent image, before final protective layers of spray varnish were applied.