The Conservation of a Severely Flood Damaged Painting, ‘At the First Touch of Winter, Summer Fades Away’ by Valentine Cameron Prinsep (1897) from Gallery Oldham, Greater Manchester

This painting was conserved following a flood at Gallery Oldham which occurred during ‘The Beast from the East’ in March 2018.

Treatments included: on site visits to carry out emergency first aid treatments; pre-stretching the canvas once it arrived in the conservation studio; consolidation of the tented and flaking paint layers; lining the weakened canvas onto a secondary support canvas; refurbishiing the stretcher; replacing the painting back onto the stretcher; varnish and over-paint removal; filling, retouching and varnishing; full photography and documentation. 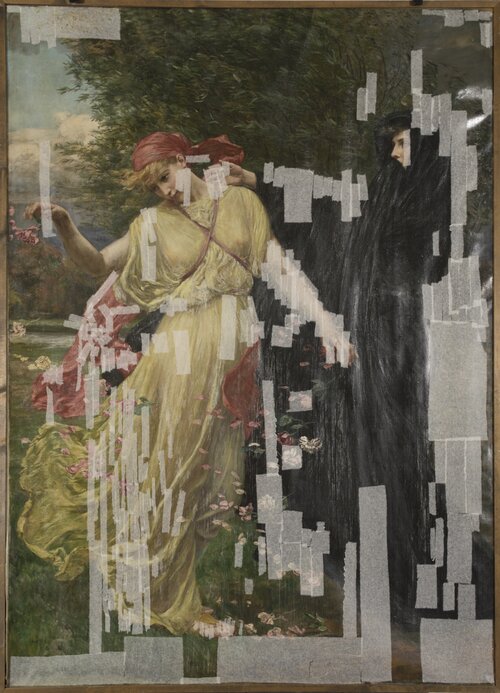 Immediately following the flood at Gallery Oldham, a team of paintings conservators from our studio travelled to the gallery to carry out emergency ‘first aid work’ on the paintings. This included adhering thin strips of tissue to any flaking paint layers. These strips of ‘facing tissue’ would ensure that the loose paint flakes were not lost as the painting began to dry out. In this photograph, you can see the amount of ‘facing tissue’ applied, which gives an indication of the amout of damage suffered by the paint layers.

When the painting arrived at the conservation studio, it had thick dirt layers including debris which had been washed down the front of the painting in the flood waters. The varnish layers had been blanched and crazed (developed fine fissures) as a result of contact with the flood waters. The canvas had also shrunk where water had ran down the reverse. This left the ground and paint layers with insufficient space to lie flat on the canvas, and they were pushed up into a ‘tented’ position and were only very loosely attached to the underlying canvas. In many cases, the ‘facing tissue’ was the only thing actually holding the flakes of paint in place. 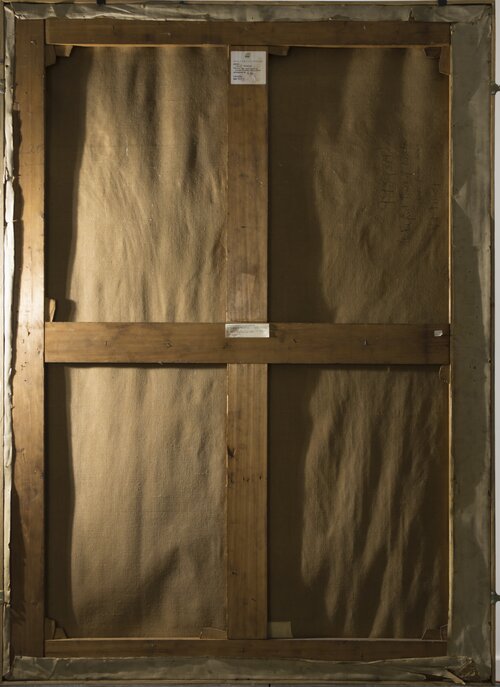 The reverse of the canvas was dusty and dirty and the wooden expansion keys were not seucred to the stretcher.  This rakling light photograph of the reverse shows the extent of canvas undulations and ripples, most of which had been caused by contact with the flood waters. 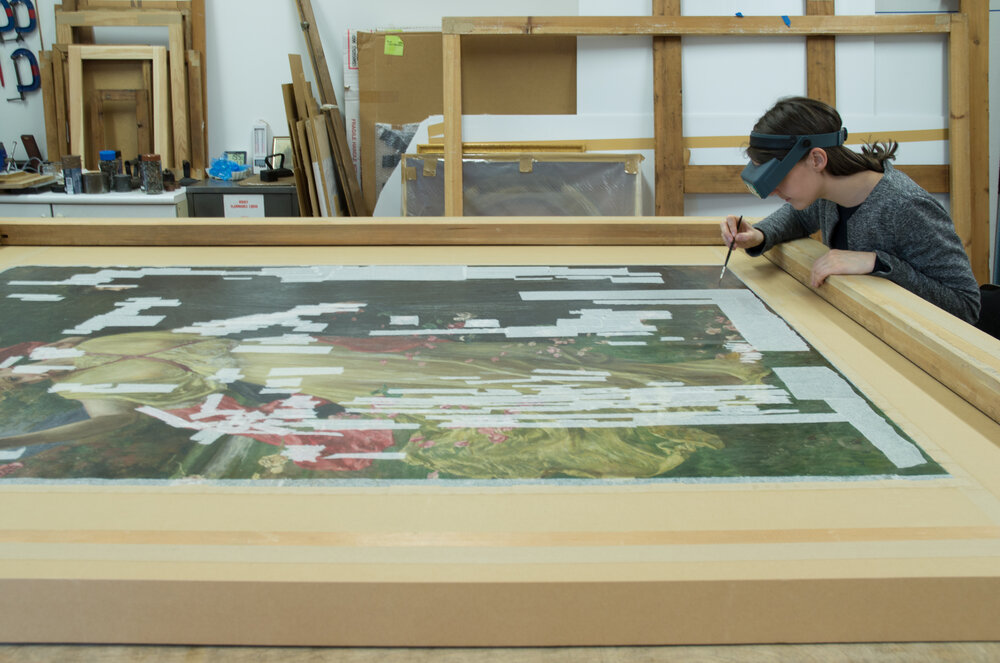 In order to consolidate (re-adhere) the loose paint flakes back down onto the canvas, it was first necessary to remove the canvas from its stretcher, ease out the worst of the disortions and then gently re-stretch it onto a wooden loom system following a method known as pre-stretching. Conservation adhesive could then be painted into cracks in the paint layers. Through capillary action, the adhesive would flow between the paint layers and the re-stretched canvas. A thermostatically controlled spatula was then used to lay each individual loose flake of paint back down onto the canvas. 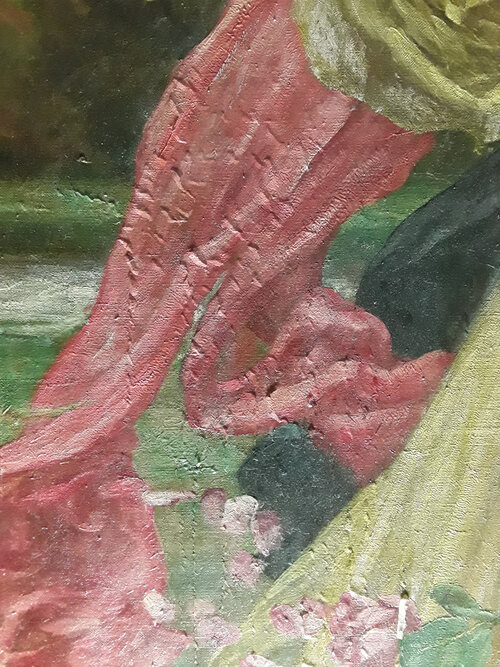 In this detail raking light photograph taken before treatment, you can see the extent of the flood damaged paint layers. You can really see the ‘tented’ effect, whereby the paint layers have been pushed up into a ‘tented’ position following shrinkage of the underlying canvas support. 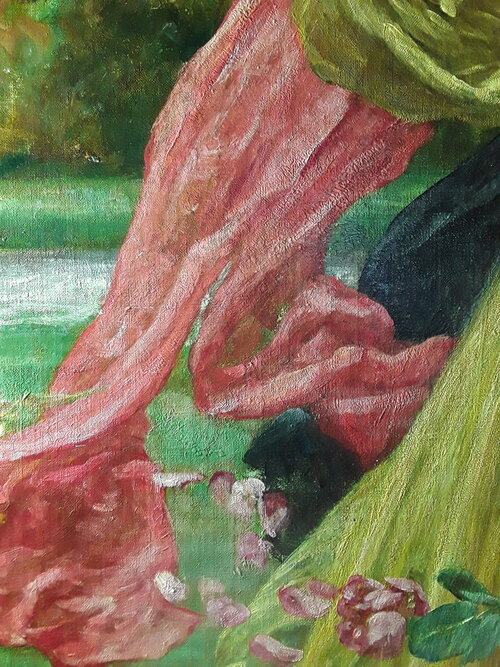 This detail raking light photograph was taken after the intricate and time consuming pre-stretching and consolidation treatment. 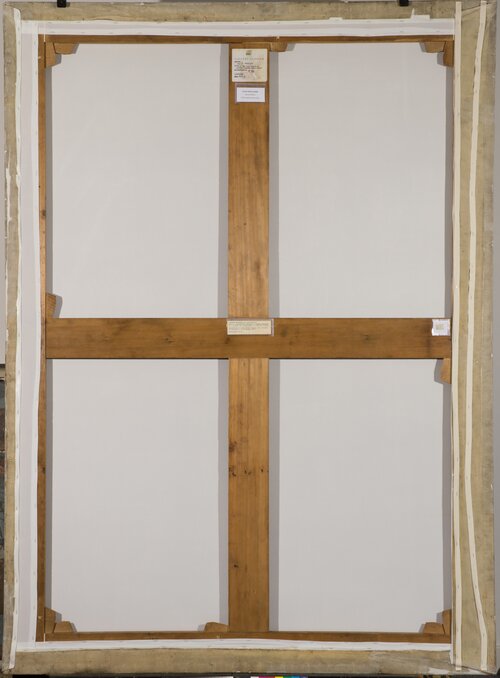 In order to support and stabilise the weakened canvas, it was decided to adhere it to a secondary support canvas in a process known as lining. The painting was lined onto a polyester sailcloth lining canvas adhered with a synthetic heat-seal adhesive.  The existing stretcher was then refurbished and the lined painting was re-attached to it using canvas pliers and copper tacks. 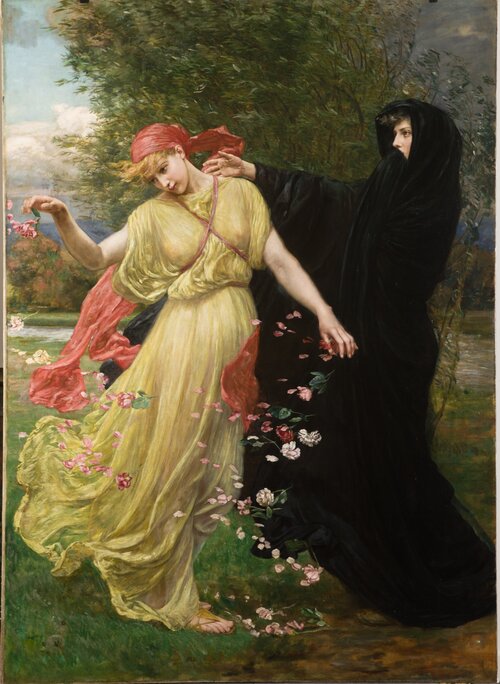 The water damaged, blanched and crazed varnish layers were then removed. This treatment was carried out using cotton wool swabs and a bespoke solvent mixture.  After the painting had been cleaned, an isolating varnish was applied to protect the original paint layers. The small paint and ground layer losses associated with the flood were then filled with a hand-made ‘putty’ comprising an inert filler mixed with a synthetic binder. Once dry, the fillings were textured to imitate the appearance of the surrounding original paint. The filled losses were retouched with dry pigments bound with a synthetic resin.  The painting was then sprayed with several layers of a stable synthetic resin varnish. 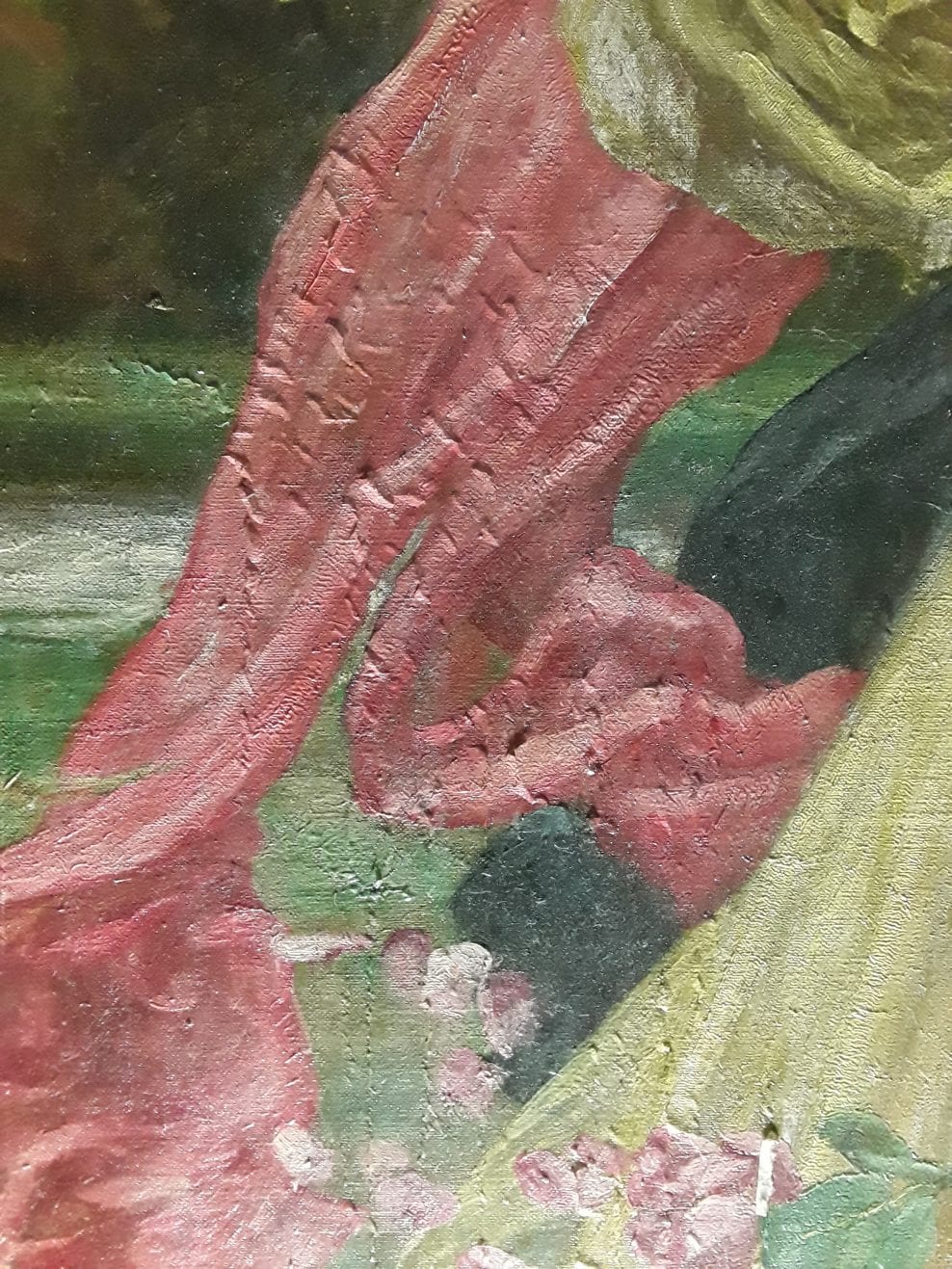