The restoration of a Victorian tavern lantern as part of renovation works to the historic building it was fitted to in the centre of Swansea. The iron frame had corroded significantly and many of the glass panes were cracked and broken. The latter were repaired or replaced after careful removal.

The ‘Ye Olde Wine Shoppe’ building is now a Holland & Barrett store and is located at 10 Union Street in the centre of Swansea.  The building was undergoing refurbishment works and this was being undertaken by QI Refurb and Contracts Limited based in Telford.  They contracted the Historic Metalwork Conservation Company to initially carry out a condition report on the decorative lantern suspended outside the front of the store. Along with recommendations for its repair.  These repairs were approved by the local conservation officer, so the works were then instructed by the client, Holland & Barrett.

The building at 10 Union Street, Swansea, was originally the Tavern Pub.  It was re-modelled in and Arts & Crafts style at the end of the 19th Century before being reopened as ‘The Olde Wine Shoppe’ by the famous diva, Madame Adina Patti, an Italian Opera singer, in 1897.  The Wine Shoppe was perhaps best known for Boris the Bear, a stuffed bear on display in the pub’s entrance.  He had been a well-known dancing bear who travelled to Swansea in the 1920’s & 30’s as part of a Russian circus.  He was photographed with Jimi Hendrix in the 1960’s.  The Wine Shoppe closed its doors in the late 1980’s and was later listed Grade II in 1987.

The large lantern was suspended above the front of the pub building by two forged iron tie bars and fixed with a steel tube back to the façade.  It was originally a gas lantern and would have had a vent/chimney to its top, but this had been lost many years ago leaving a hole in the shaped iron top covering or tent.  It was approx. 3 feet high with a gently tapering hexagonal frame with gilded ball feet at each bottom corner.  The lantern was glazed with coloured glass panes, alternate green and orange to the bottom and top rows and decorative red panes to the centre two rows.  The decoration was left in clear glass with a second white glass pane secured behind each to reveal the details.  The bottom of the lantern had a decorative hexagonal pane fitted with ‘No.10’ highlighted on the same red background.  There was a hinged door to the right side of the lantern that allowed access to later incandescent bulbs.

Conservation
The lantern was in a very poor condition.  Before removal it was sitting precariously on the building façade, having been struck by a vehicle in the past.  The lantern was carefully taken down by QI Refurb & Contracts and transferred to Shropshire for conservation.  The inside of the lantern was very dirty having been open to the weather for many years due to the hole in the tent.  Some of the glass panes were cracked and others were missing, having ‘fallen’ into the lantern.  Two of the decorative ball feet were bent out of alignment and the side to one of the originally gilded hearts set out from the front of the lantern, was missing.

After being recorded photographically, the remains of the iron tent to the top of the lantern was carefully removed by drilling out the old fixing bolts to the top brackets.  This gave access to the inside of the lantern and revealed the original gas pipe that helped support the frame.  The old incandescent light bulbs and holder was removed and set aside.  Each glass pane was then labelled before being carefully removed and set aside for repair or replacement.  Paint samples were taken from the lantern frame, tent, decorative hearts and ball feet.  This identified that the lantern had originally been painted black and that the current green colour was more recent.  It also revealed that the ball feet and two repoussé hearts had been gilded.  As the paint layers were failing, these were removed by hand back to a sound surface on all parts.  The remaining iron lantern frame was heavily corroded as water had been able to sit in the lantern over many years.  Wasted sections were removed back to sound metal before new sections were welded in.  The bent feet were straightened, and a new heart piece made from copper sheet.  The tent was also heavily corroded.  Damaged areas were cut back to sound metal and new repair pieces fitted by welding.  This included a piece to close in the hole to the top.  Research had been unable to reveal what had originally sat on the top of the tent so it was agreed that this hole would be filled.

Each glass pane was cleaned with de-ionised water and non-ionic detergent after the white backing panes to the decorative glass piece had been removed.  A small number of the decorative panes had cracks present.  These were repaired using a conservation grade epoxy resin adhesive (Sylmasta Hxtal epoxy resin), a water-white resin that resins UV damage.  The cracked orange and green panes were repaired where cracked or replaced where sections were missing using the same Cathedral glass.

The repaired lantern parts were repainted using an alkyd oil paint system (Sherwin-Williams Kem-Kromik) and finished in the original carbon black.  The repoussé heart was repaired by fixing the new section to the original using a structural epoxy resin adhesive.  The painted hearts and ball feet were oil gilded using 23.5 carat gold leaf.  The glass panes were re-fitted using Hodgson’s Flexistrip tape and Heritage Sealant on the inside to make sure the lantern frame was fully waterproof.  The outside was filled using a butryl putty that could be overpainted.  New hinges were fitted to the repaired original door.  The door was held closed via a threaded stud and wing nut of stainless steel and sealed with a weather strip.  New brackets were made to allow the tent to be re-fitted to replace those that had heavily corroded.  An insect mesh was also added around the gap between the frame and tent to prevent moths from entering when the light was on.

The original gas pipe arrangement inside the lantern frame was replaced as it had corroded heavily.  New galvanized pipes were fitted with a ‘T’ section to allow for the fitted of an updated lighting system.  The hollow pipe allowed the electric cable to feed back to the inside of the shop façade.  The refurbished lantern was returned to QI Refurb and Contracts for re-fixing to the front of the Holland & Barrett building as part of their renovation works. 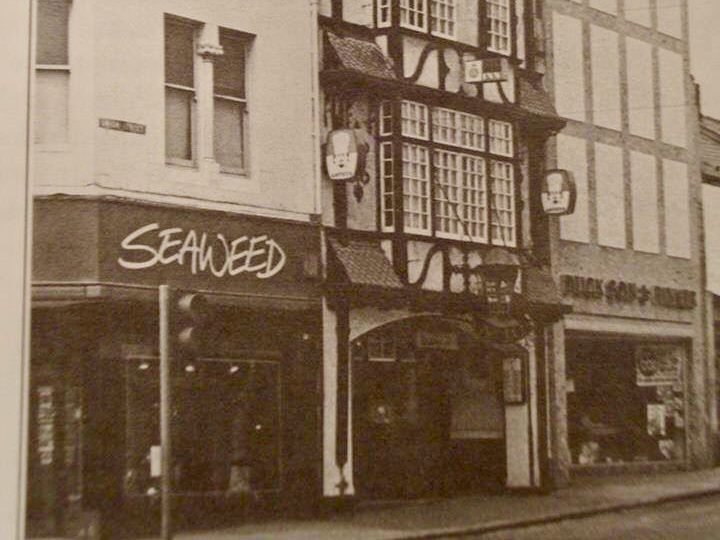 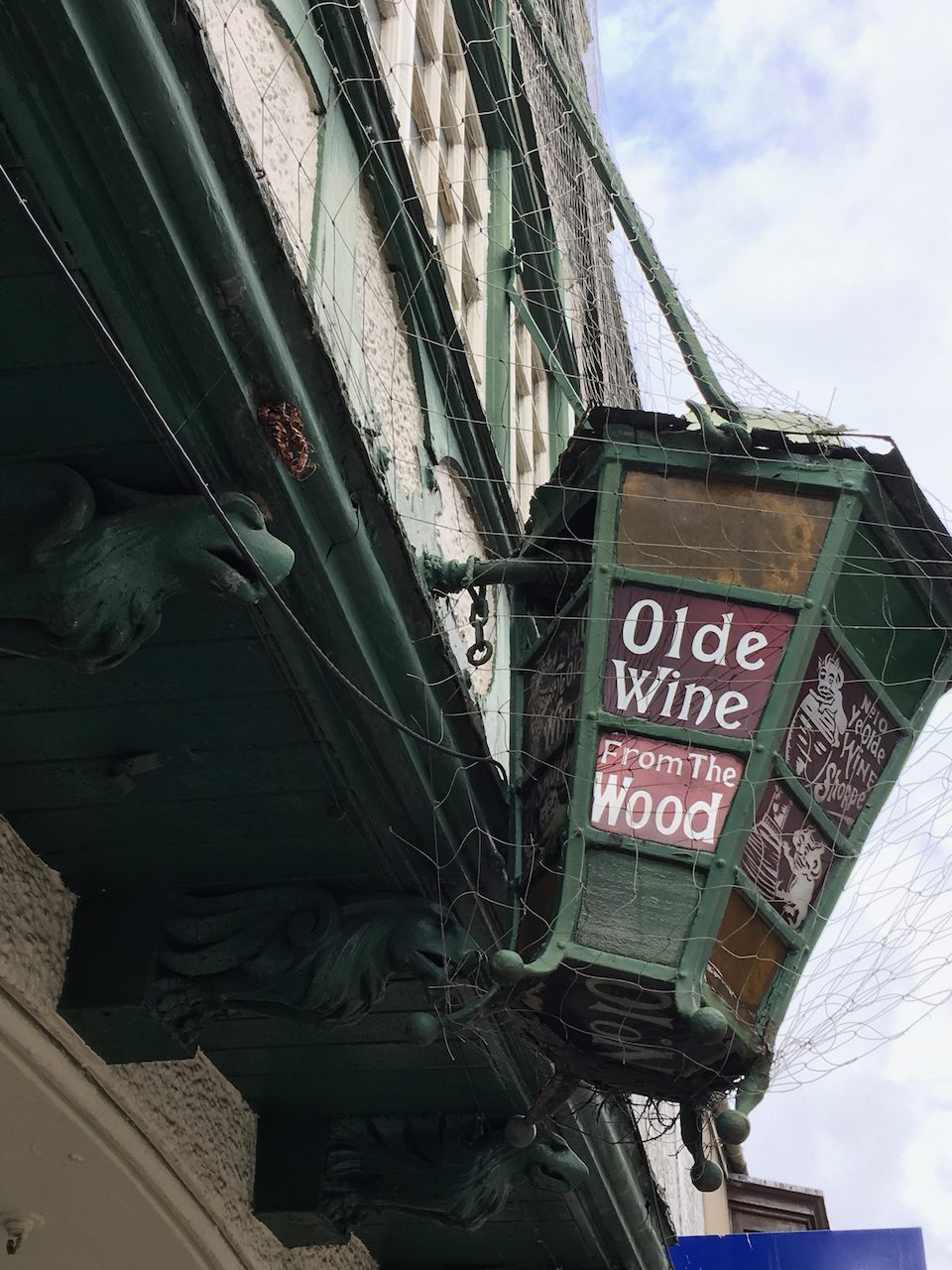 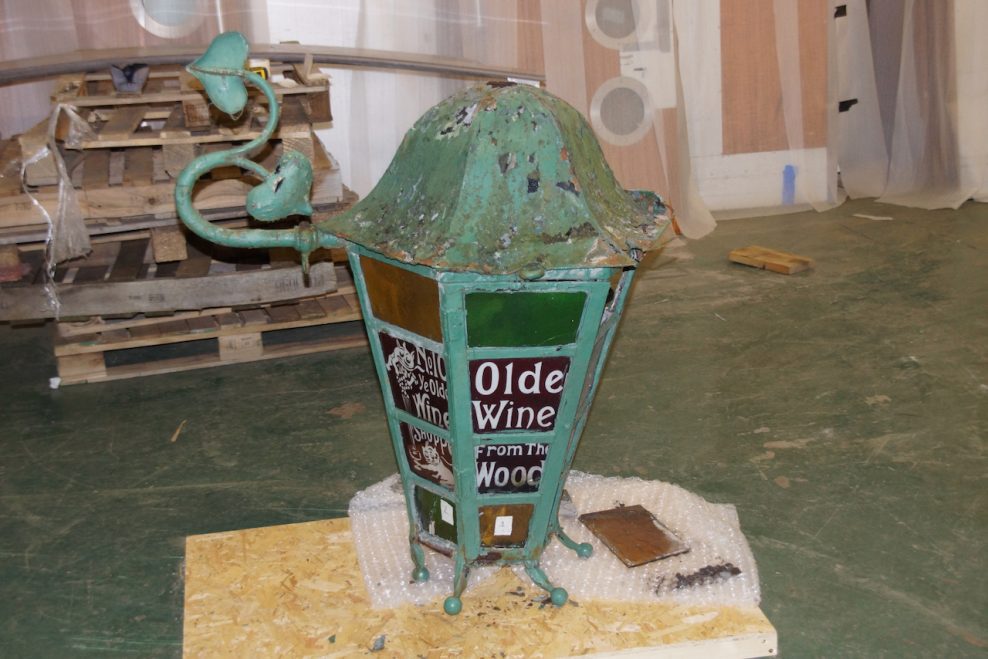 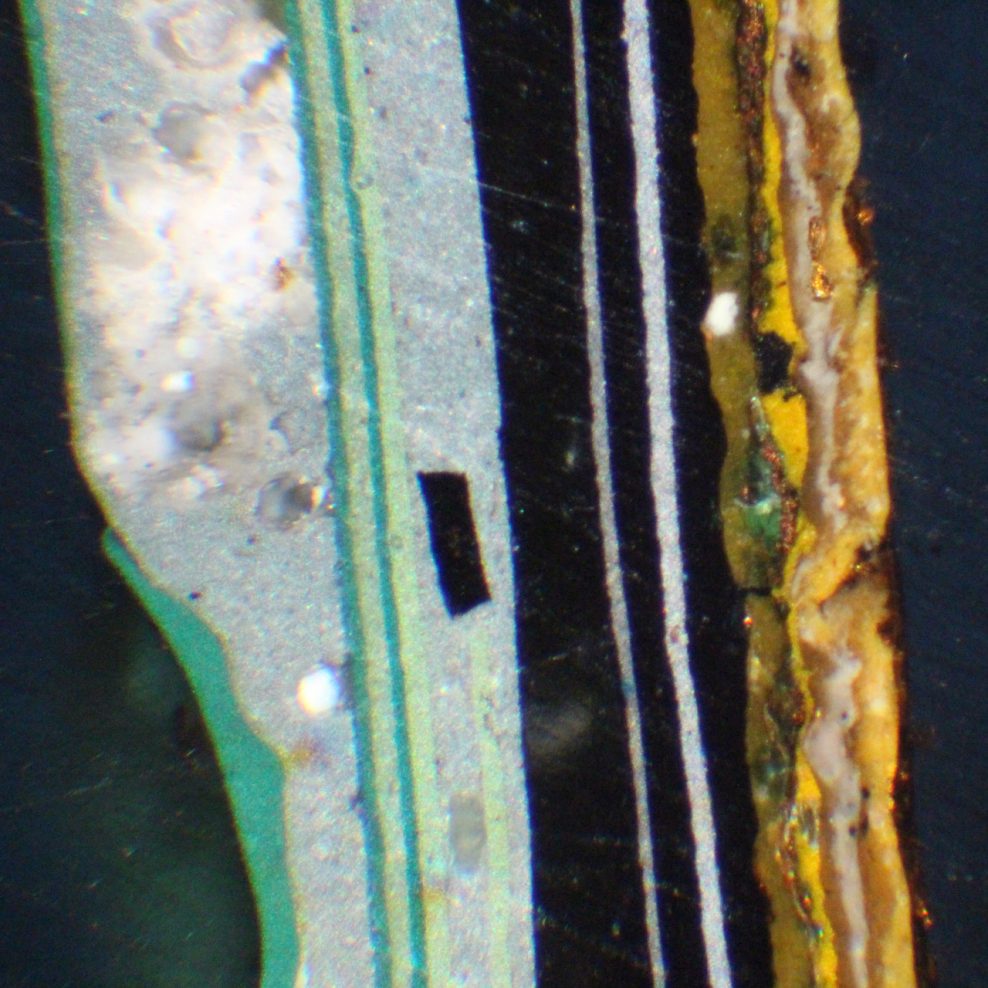 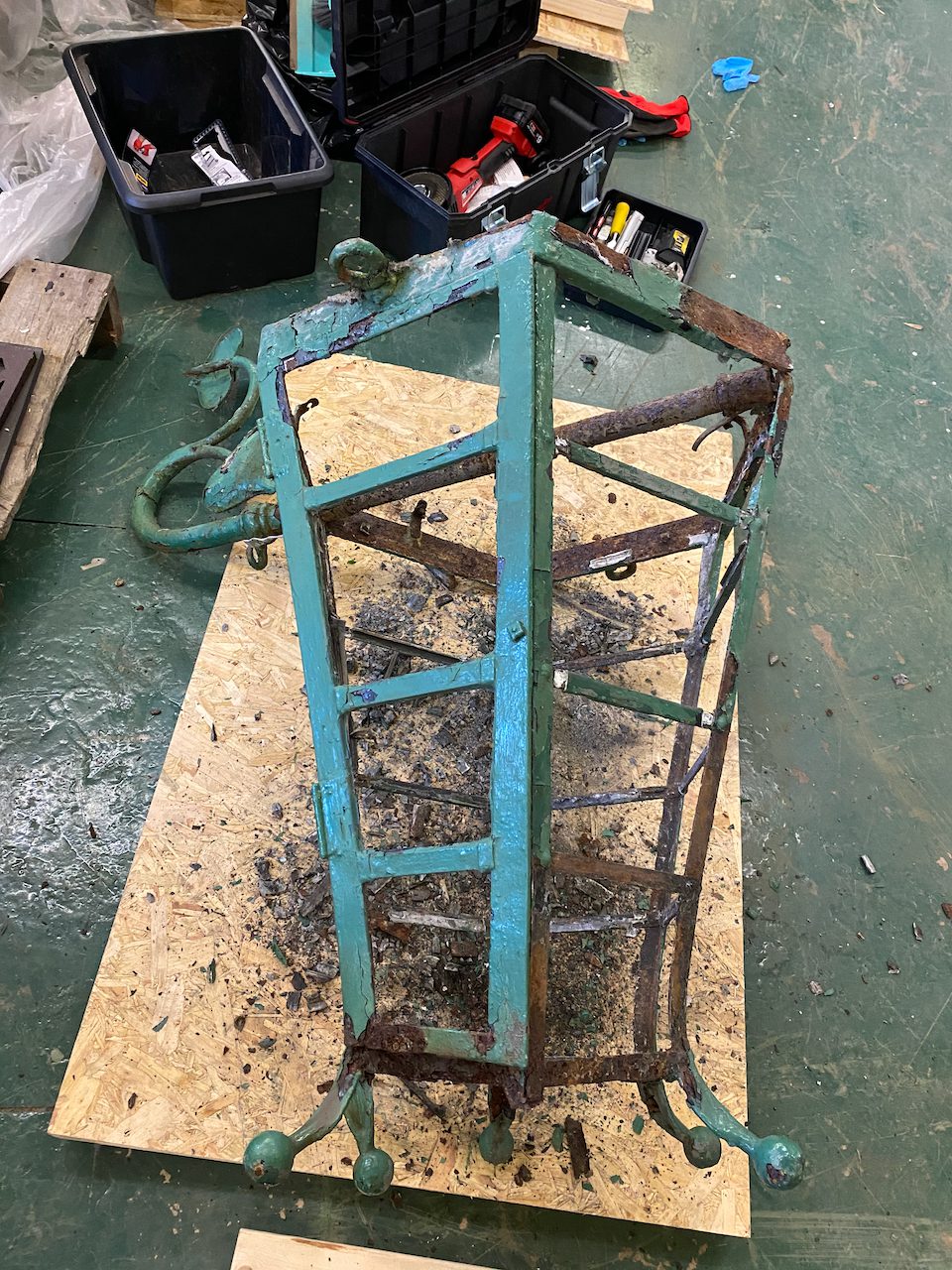 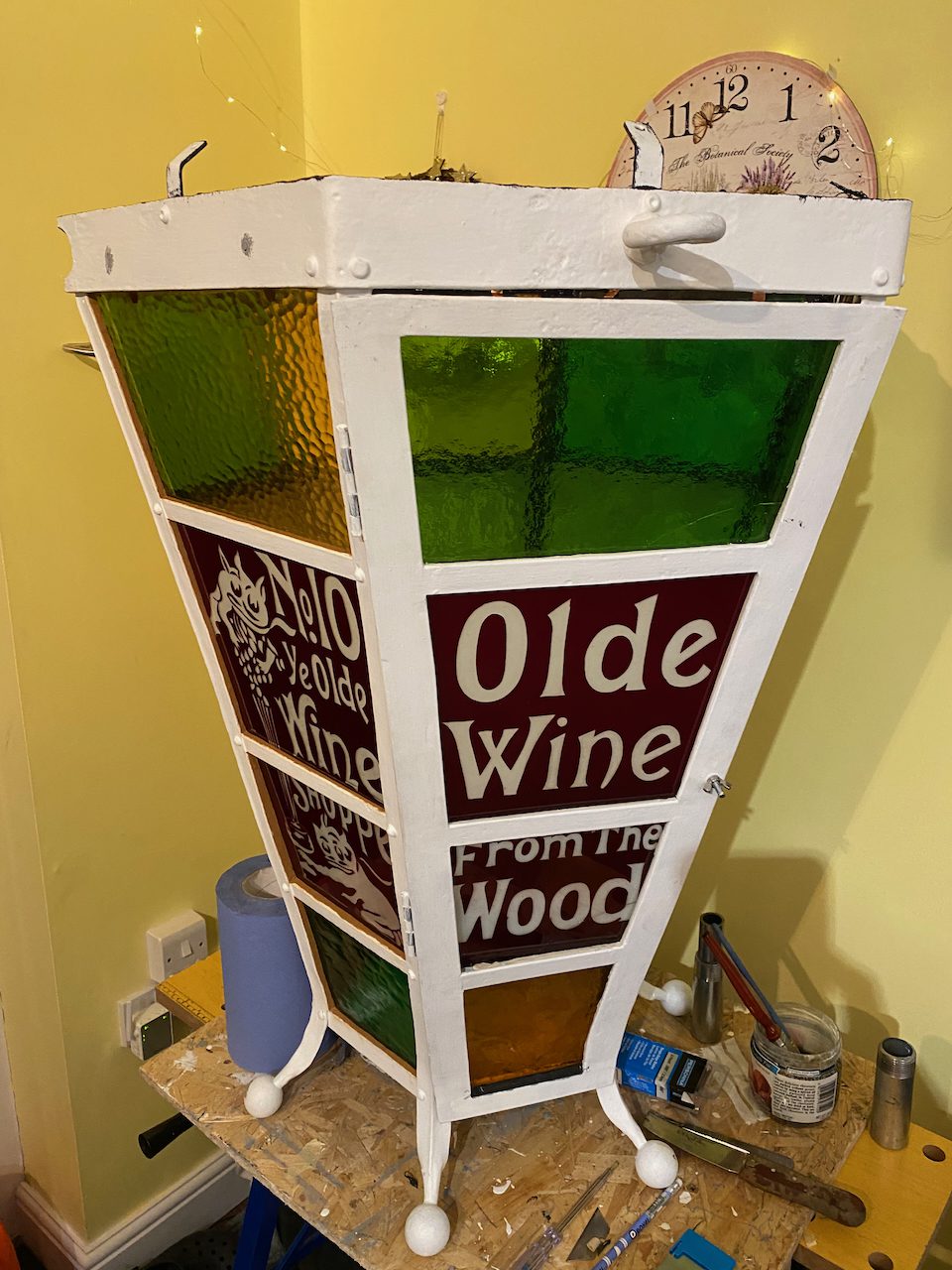 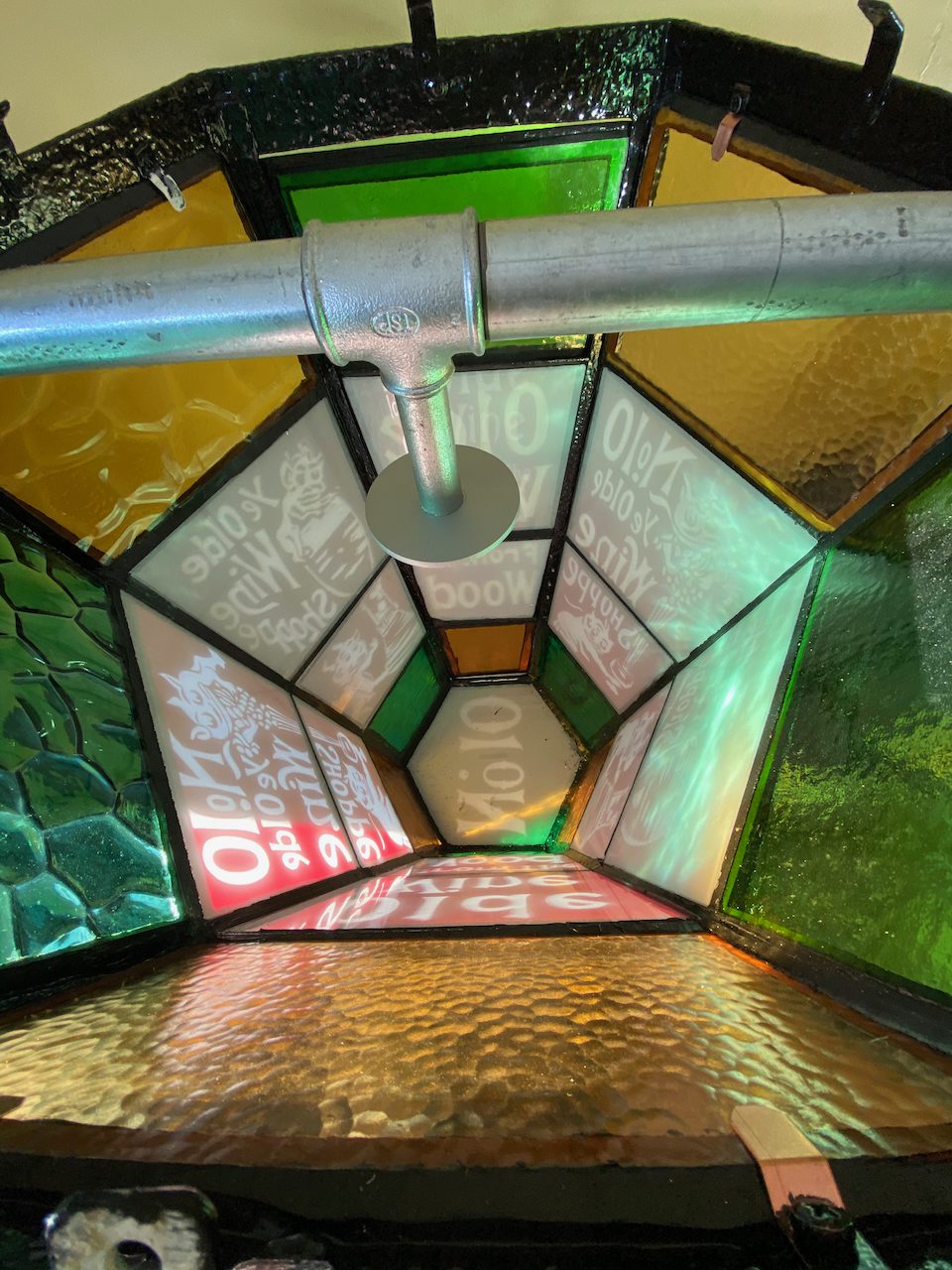 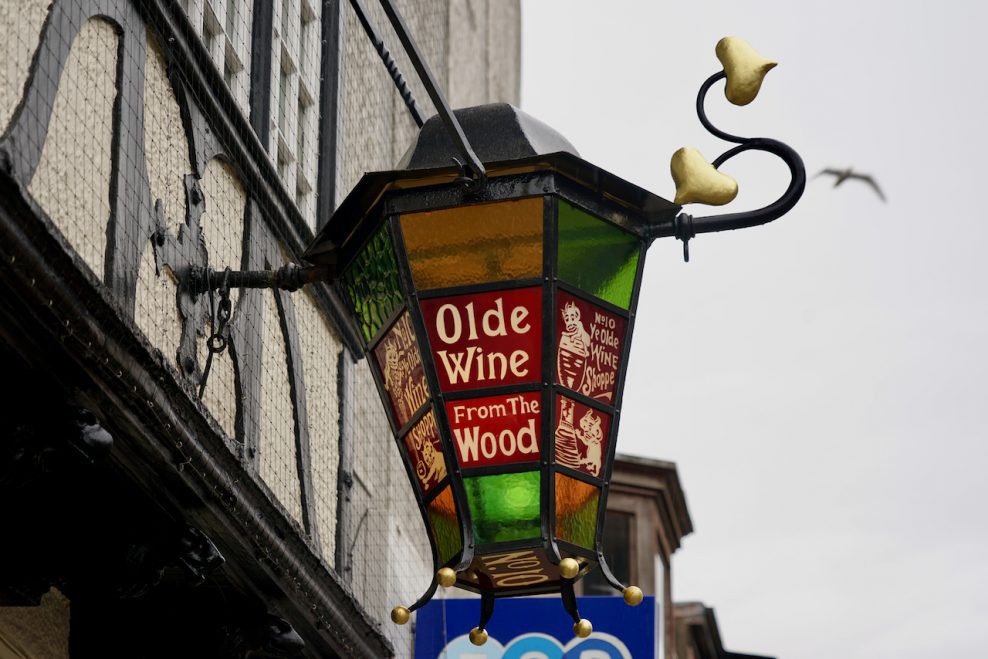