Introduction
St Peter’s Church is located in the village of Daylesford, Gloucestershire, close to Stow-on-the-Wold.  It is a Grade I listed building and is now redundant, coming under the care of St Peter’s Daylesford Charitable Trust.  The present church was designed in 1859 by John Loughborough Pearson (1817 – 1897), a Gothic Revival architect.  The church contains two very ornate, painted iron transept screens that are believed to be the work of Francis Skidmore, the well-known craftsman and a leading figure in the Gothic Revival Movement.  He is perhaps most well-known for the Hereford Screens now on display at the Victoria & Albert Museum in Kensington, London.

The church building required some conservation and repair to its fabric and Donald Insall Architects were employed as the project architects by the Charitable Trust.  Works included repairs to deteriorating stonework inside the church, repairs to the stone tiled roof, renewal of the electrical wiring, an enhanced lighting scheme and the cleaning and consolidation of the transept screens, altar rail and wall lights.

There is no direct evidence been found to confirm that the decorative ironwork to St Peter’s church, Daylesford was that of Skidmore. However, its style, date of manufacture, and Skidmore’s link to J L Pearson the architect, point to it being most likely made at his factory in Coventry. St Peter’s church was built at almost the same time as a similar church, St Mary’s, South Dalton, also designed by Pearson. There is direct evidence in the form of a ledger entry noting that the ironwork was supplied by Skidmore. Other churches by Pearson also contain decorative ironwork, including screens. Examples being the Church of St Mary, Dalton Holme on Humberside and the Church of St Mary, West Lutton, Yorkshire. Historic photographs survive of the inside of both churches held in the Historic England archives at Swindon in Wiltshire. These have some similar decorative elements to those from St Peter’s church. These screens are believed to still exist and could be examined more closely.

Conservation
The paint finish to the screens had been examined by Helen Hughes of Historic Interiors Research & Conservation.  She had confirmed that much of the ironwork retained its original colour scheme with only the altar rails having painted a second time.  Despite the fact that the church had been redundant for a number of years there was surprisingly little loss of these paint coatings.  Because of the unusual survival of original colour scheme the architect advised that it should be examined by a specialist metals conservator and a detailed condition report be prepared.  Peter Meehan ACR, of the Historic Metalwork Conservation Company was approached to carry out a condition survey of the transept screens in June 2019.

The two transept screens, altar rail and wall lights were made from forged wrought iron elements and finished using linseed oil-based paints, consisting of a red iron oxide primer, light blue undercoat and coloured finish. Each screen was divided into five sections/bays by decorative iron uprights.  A repeating screen sat at low level divided up into small squares by criss-crossing bars.  Set at the centre of each square was a decorative flower detail.  The detailing at high level was very ornate with a series of high-level panels between each upright, all ten being to a different design.  Decorative elements were finished in dark reds, dark green, blue, yellow and purple, with gilding being used to highlight certain features to the nave side of each screen.

Although the ironwork was located inside the church building and so was protected from the outside weather, there was little or no heating or environmental control inside.  As a result, the ironwork had been affected by condensation during the colder months of the year.  The original paint finishes were applied to provide protection to the ironwork and give it a decorative finish.  These coatings were now very old and had degraded.  Moisture had managed to penetrate through flaws in the paint layers to the iron beneath, leading to small areas of corrosion and rust formation.  In addition, as the church is no longer in regular use, there has been no recent cleaning to the iron transept screens resulting in the build-up of dust and dirt layers.

After an initial condition survey of the transept screens and altar rail, proposals were put together for the conservation of this very important ironwork.  The main recommendation was to carry out some initial cleaning and conservation trails to see find the best technique to clean the painted iron surfaces and to trail a number of materials that would be suitable to consolidate the deteriorated paint layers and treat localised rust patches.  A small section to one of the lower screens was selected for the trials.  It was initially dry-cleaned using conservation brushes and a vacuum cleaner.  The painted surfaces were then wet cleaned with distilled water and 1% TritonX100 non-ionic detergent, applied using cotton wool swabs rolled across the surface.  Small rust blisters and areas of loose rust were carefully removed under magnification using a scalpel blade and fine glass bristle brush back to a sound surface.

Four potential consolidants were selected to identify which would be the most suitable to both consolidate the paint layers and enhance the overall colour of the paint finishes which had dulled with age.  These were a 5% solution of Paraloid B72, a 5% solution of Paraloid B67 (both acrylic resins), Primal WS24 and Lascaux 4176 (both acrylic dispersions in water).  Four identical decorative flowers to the lower panel were chosen so the resulting finish could be compared directly.  Two coats of each consolidant were applied, allowing the first to dry before applying the second.  A visual assessment suggested that the 5% Paraloid B67 in white spirit gave the best results.

Following the success of the cleaning trials and consolidation the original paint finish had been significantly enhanced.  The client therefore decided to go ahead with the conservation of the transept screens, altar rail and wall lights.  The works began in September 2020 during the first lifting of Covid-19 restrictions.  They formed part of a package of works being carried out including the complete re-wiring and re-lighting of the church building.

The transept screens were initially photographed before being dry cleaned using soft brushes and a portable vacuum cleaner.  Attempts were made to wet clean the paint layers and iron but over larger areas this appeared to be less successful than during the trials.  There was also some concern about introducing water to the areas of unpainted iron where paint layers had been lost.  These generally consisted of tiny rust blisters that had lost their tops.  An alternative dry-cleaning technique was tried using fine abrasive pads made by 3M known as Scotchbrite.  They produce a range of grades with the finest being equivalent to. Fine grade wire wools.  A cleaning technique was developed where three grades of pad were used going from very fine, through ultra-fine and finishing with their light cleansing pad.  These were found to successfully remove the remaining dirt layers and to revive the original paint surface.  Small patches of iron corrosion (rust) were carefully removed using fine brass bristle brushes.  Each screen had a number of candle sconces fitted: a row at high level and a row above the choir stalls.  These had large accumulations of candle wax remaining in them.  This was carefully removed using wooden picks.

The same cleaning technique was applied to the painted altar rails and wall lights.  The latter were labelled and removed to a workshop for cleaning whilst the electricians completed the fitting of new electric cables.  As the decorative detail was much finer the cleaning process was much easier to carry out on a work bench.

Once the cleaning works were complete each screen was cleaned with soft brushes and a hand puffer to remove any remaining dust deposits, with a vacuum cleaner to collect these residues.  The painted surfaces were then consolidated with two coats of 5% Paraloid B67 in white spirit applied by brush and left to dry for 24 hours between coats.  This helped to fully revive the paint colours as well as to consolidate the surfaces.  The consolidated screens were then finished with the application of a layer of Renaissance microcrystalline wax buffed up with soft brushes once it had dried. 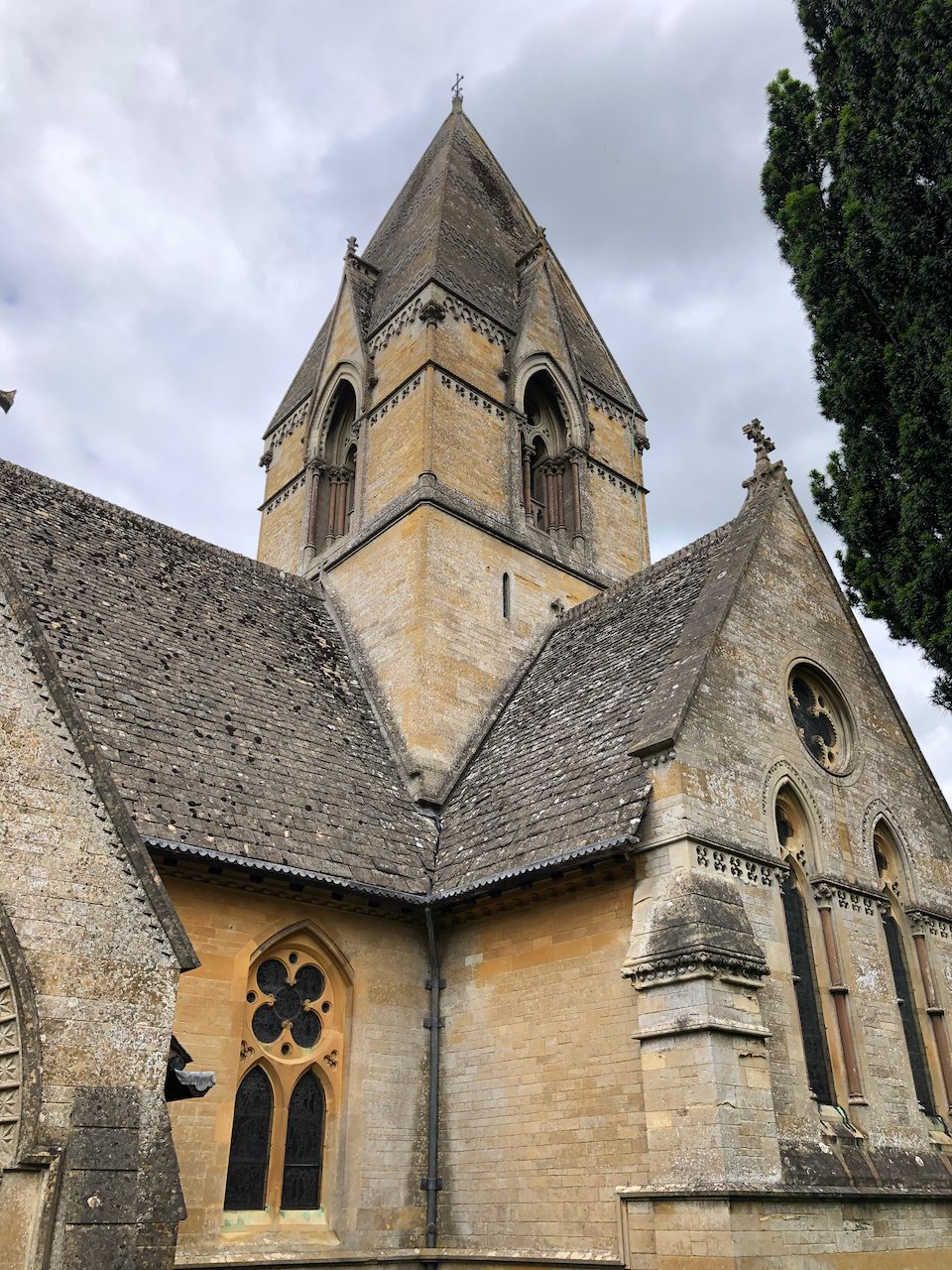 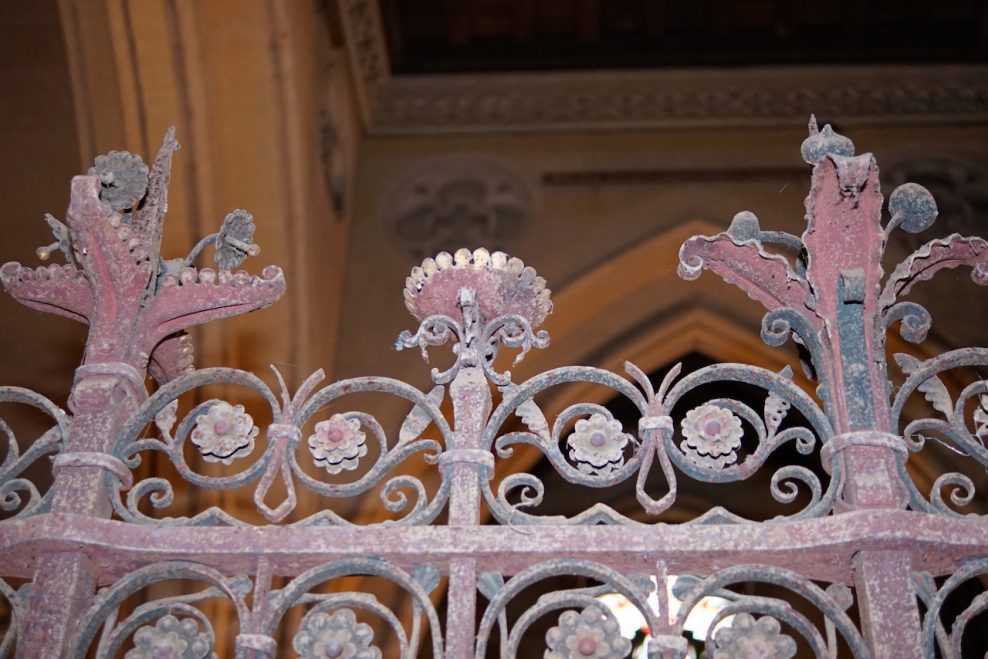 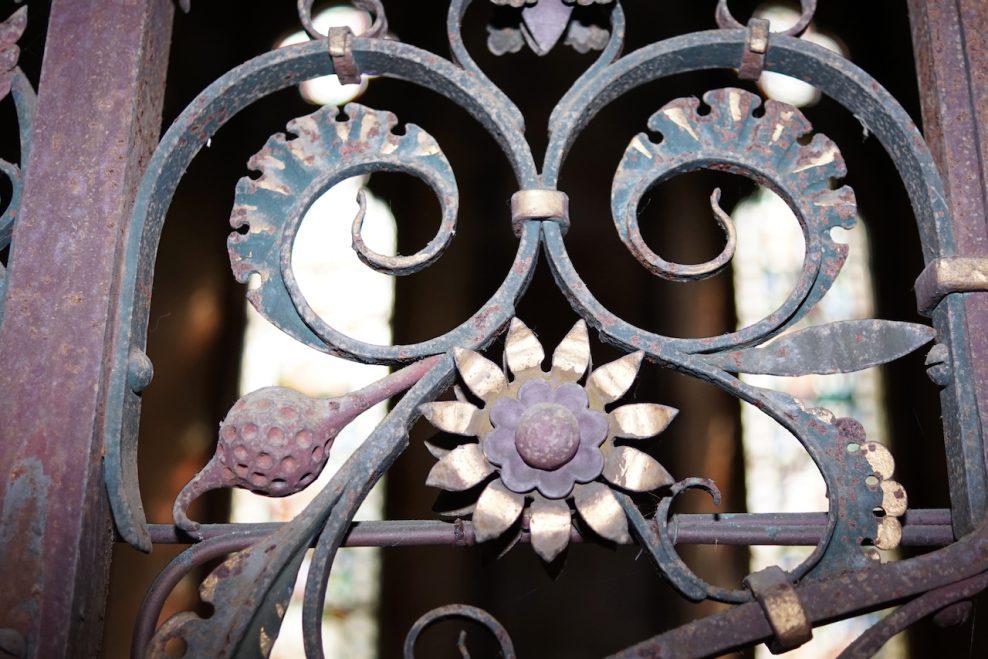 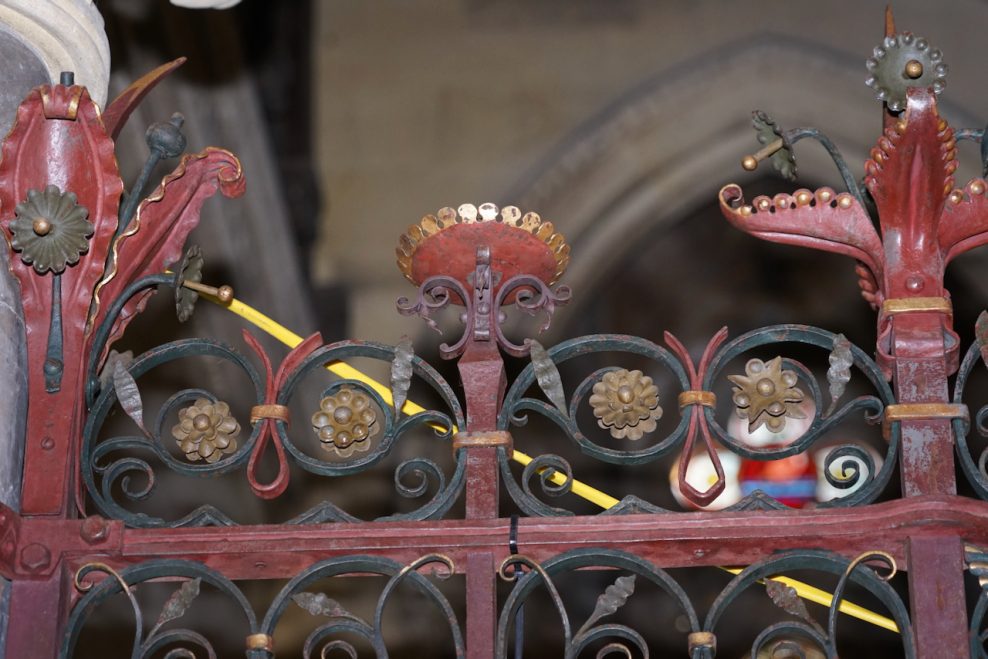 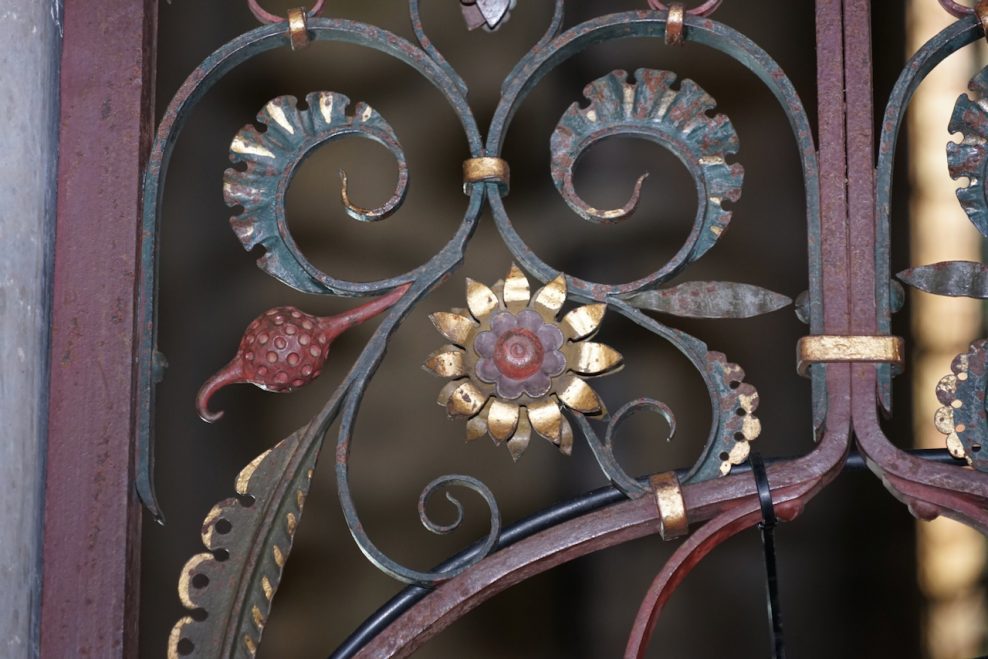 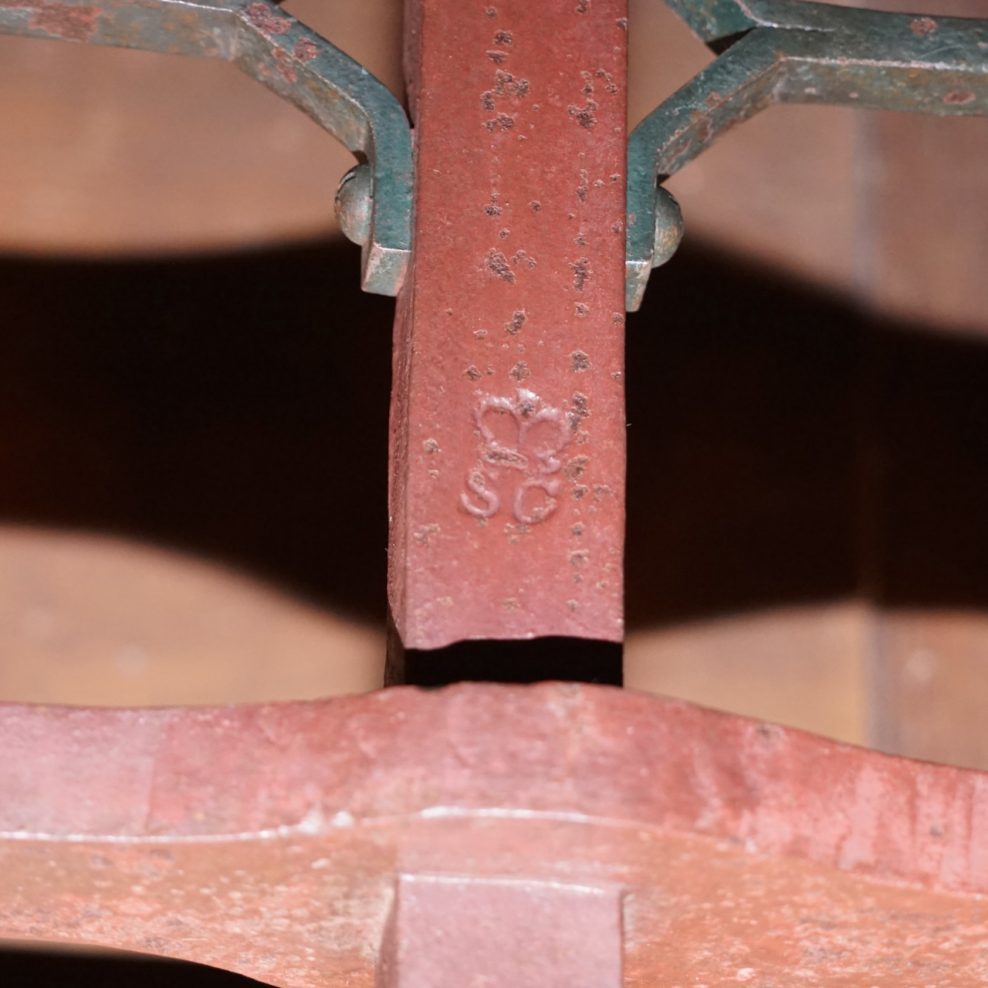 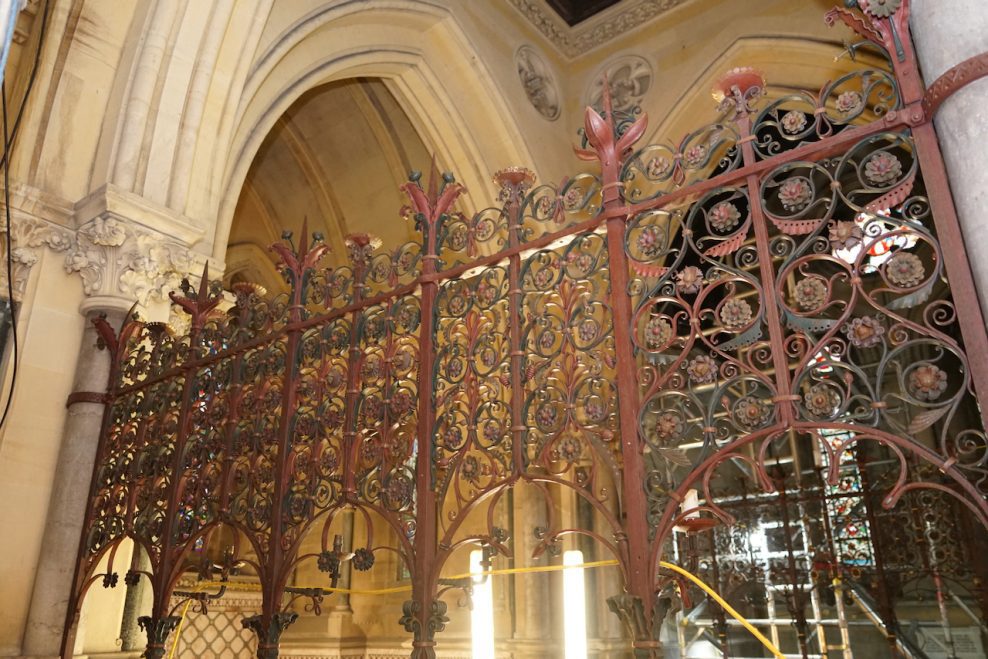