A life size plaster bust had been damaged during transport and was in many fragments. All the pieces down to dust sized particles had been saved. The treatment put all the pieces together and restored small surface damages.

An institutional client had a plaster bust broken into many pieces. It had been poorly packed during an office refurbishment and when unpacked was in many pieces.  All the fragments down to dust sized particles were retained and neatly packaged.  The client arranged delivery of the packages.  I discussed the restoration with the client to get an idea of their expectations.  After an examination I produced a Treatment Proposal with cost and the client agreed to go ahead. 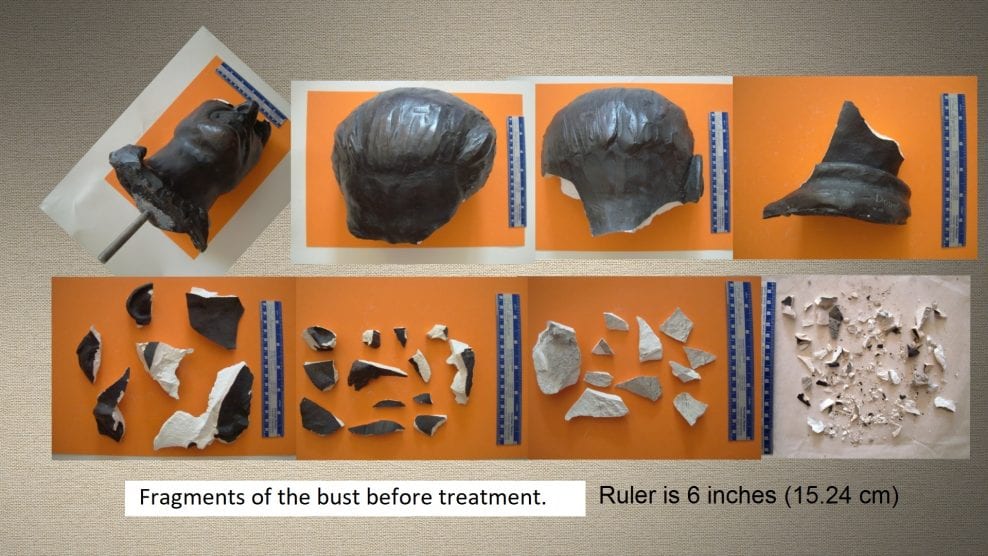 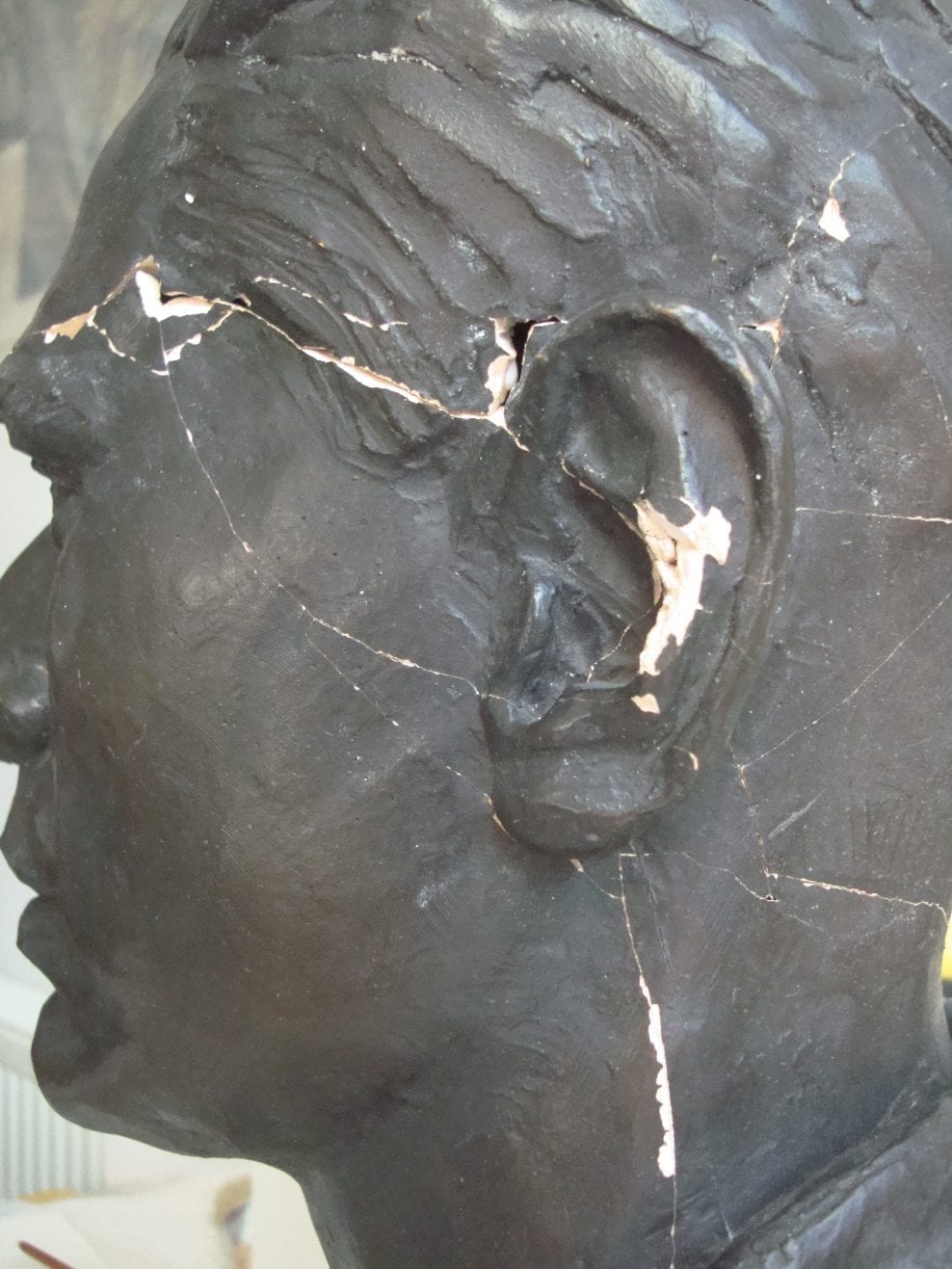 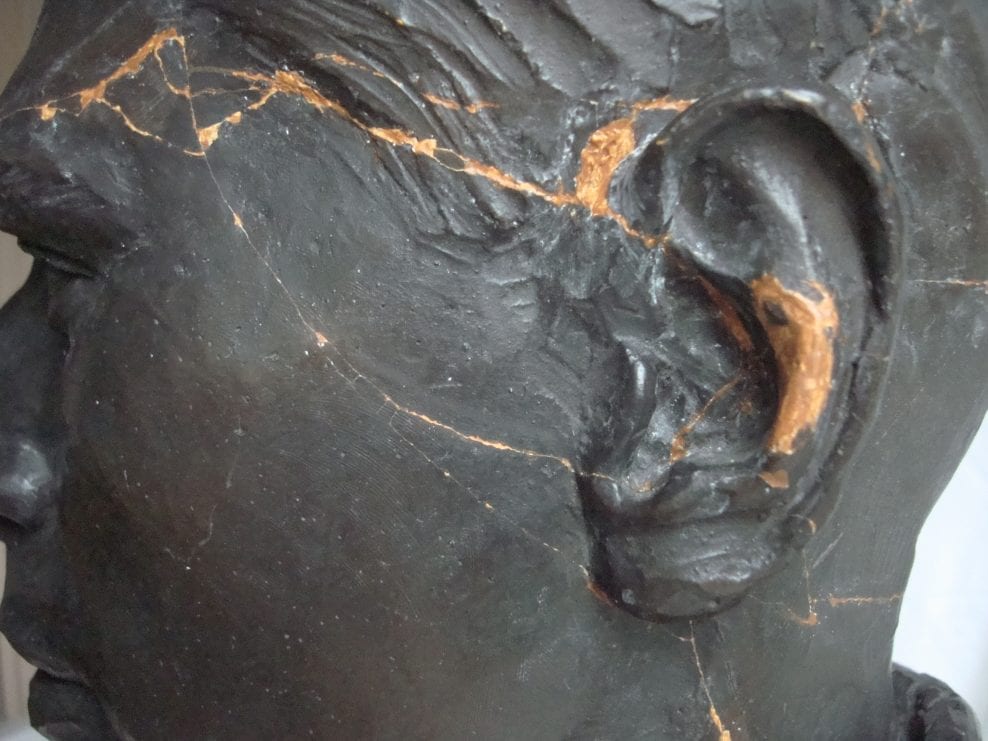 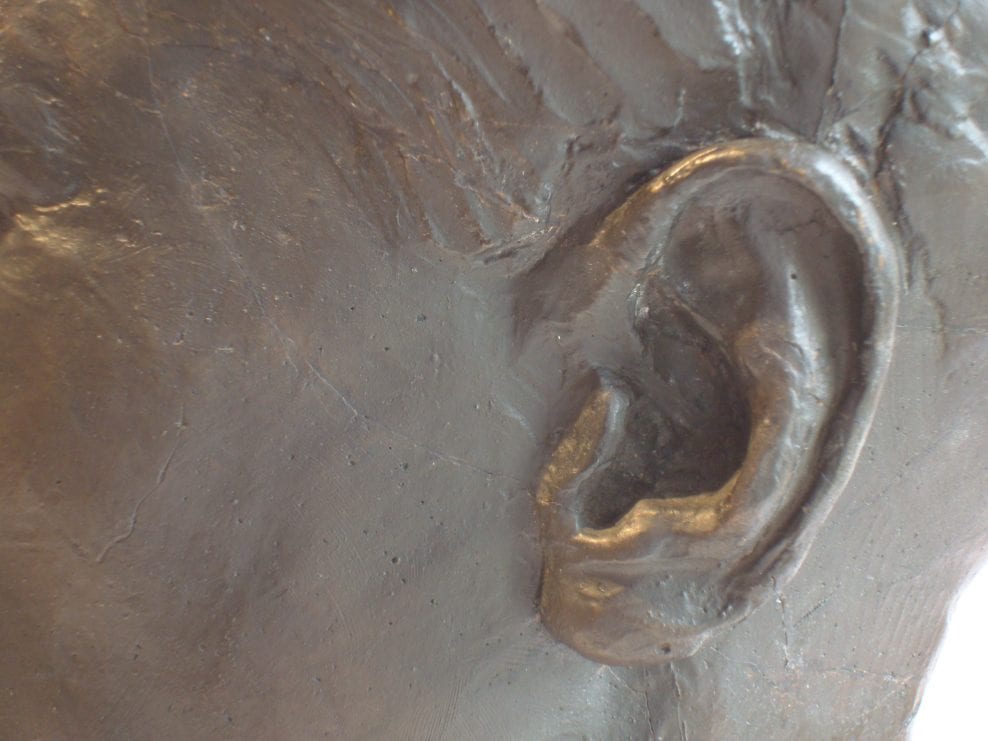 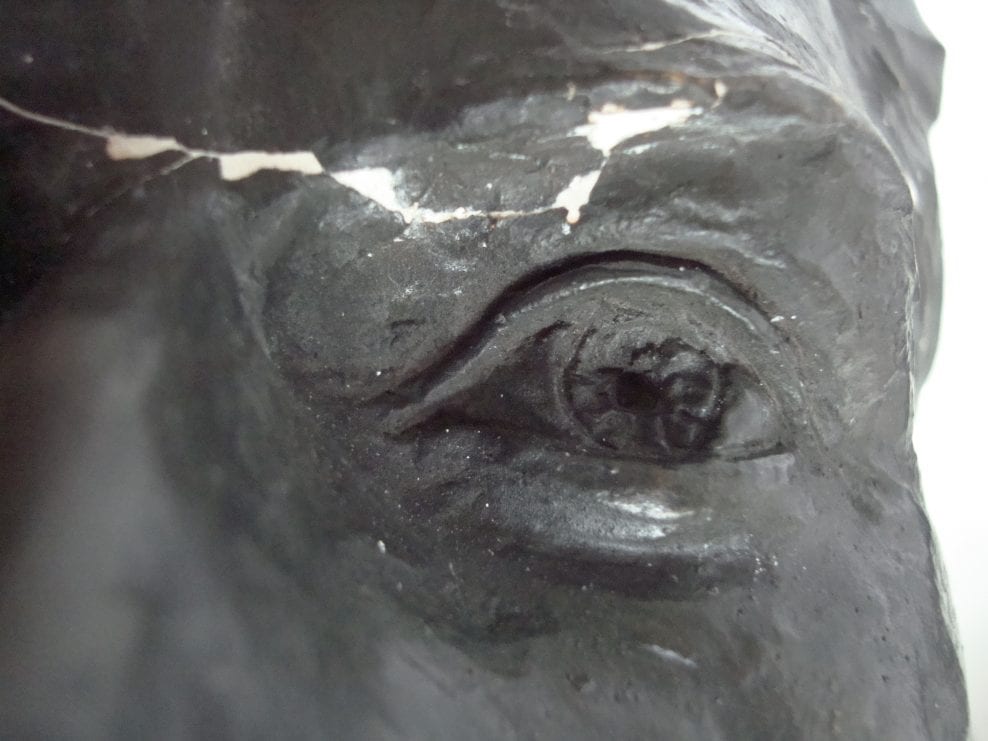 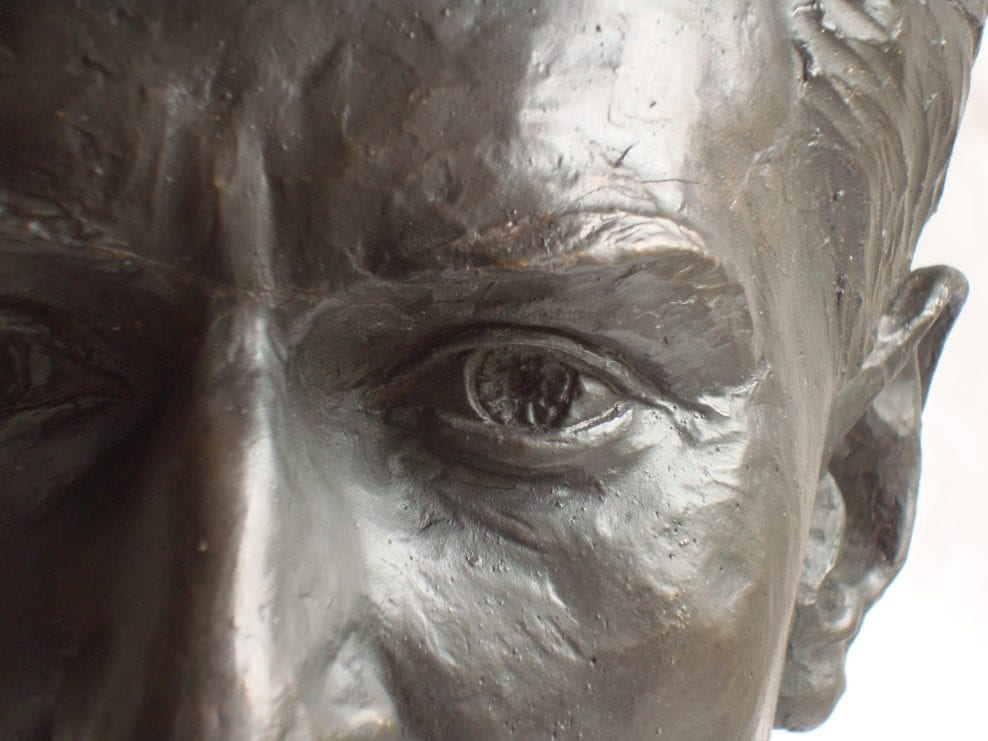 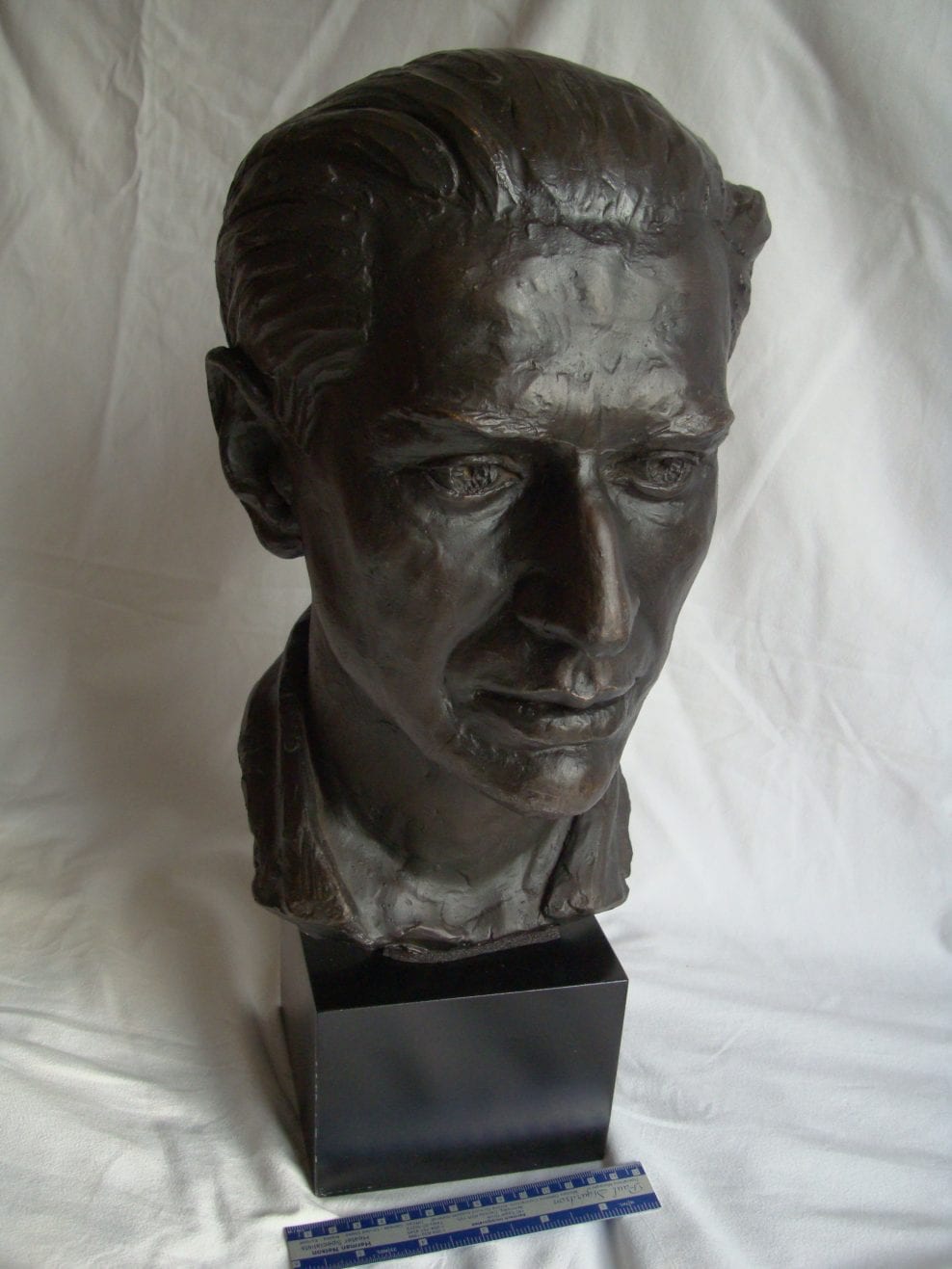 The original bust was in clay made circa 1934.  A bronze cast was displayed in 1934 and this may be the source of the plaster cast.  Our plaster bust was very realistically painted to imitate bronze.  It was cast in two layers; first a thin pale pink and then a thicker white plaster.  A metal rod was held in the base of the head with resin and was seated in a black stone socle (base).

One of the photograph shows all the pieces from four large pieces ranging down to fragments less than a millimetre.  In places the white layer had delaminated from the pink layer.  Most of the surface areas survived intact though in fragments.  The inner ridge of the left ear and the left eyebrow had been pulverised so along these lines there were no surface fragments.

The treatment consisted of adhering the pieces along the joints.  Some very thin areas were reinforced with polyester resin and polypropylene mesh.  Small fragments down to a few millimetres in size were fitted together.  The gaps on the surface along the break edges, where the plaster had turned to dust, were filled and retouched.  A black plastazote™ cushion was fitted between the bust and the base.

I transported the bust back to the client’s offices and gave the client a Treatment Report.  It went back on display in the offices.