In 2001 I was contacted by Donald Insall Architects on behalf of the Crown Estate to examine a stained glass window unearthed in the Rolls Chapel and to discuss the viability of conserving the window. Over a period of eight months the window, which depicts the coat of arms of George IV, was restored and subsequently reinstated in the presence of Queen Elizabeth II.

In early 2001 I was contacted by Donald Insall Architects on behalf of the Crown Estate to examine a stained glass window unearthed in the Rolls Chapel and to discuss the viability of conserving the window.
The Rolls Chapel, which is now occupied by the Maughan Library of Kings College London, is a historic structure. The Rolls Chapel derives from the Domus Conversorum.  The Domus Conversorum originates from 1232 when Henry III established a residence and chapel for Jews who had converted to Christianity. However, following the expulsion of Jews from England by Edward I, through the Edict of Expulsion in 1290 the Domus Conversorum became the Chapel of the Master of the Rolls or more colloquially the Rolls Chapel. In 1617 the celebrated English architect of the early modern period, Inigo Jones rebuilt the chapel that was later demolished in 1895. Alongside the Rolls Chapel was Rolls House, the official residence of the Master of the Rolls. In 1838 the residence was surrendered to the Crown and became the Official Record Office (ORO). The ORO remained here until 1902 when the site became the museum of the Public Record Office.
In 2001 Kings College London acquired the building from the Crown Estate, and over a period of two years and at a cost of £35 million the site was renovated and transformed into a library. It was during this restoration that the stained glass windows were rediscovered.
After the initial communication with the architect I visited the Rolls Chapel on 12 February 2001 to inspect the exhumed window, which was in storage and packed in timber crates. It was immediately apparent that the window had been packed many years ago, from analysis of the packing material probably 1955, and was in an assortment of conditions. It was evident that the fragments and pieces of glass, some of which still contained in the original cast iron frames, were depictions of the Royal Arms of King George IV (1762-1830). Following some investigation of the window and the Rolls Chapel itself it was possible to date the glass fragments to circa 1823 and to discover that the window would have been originally located in the East Window of the Chapel.  Following the initial investigation of the glass it was evident that a complete restoration was necessary. The Crown Estate wished for the window to be resorted and displayed within the original site of the Rolls Chapel.
The packaged window that depicted the official coat of arms of the British monarch divided into a three light window. The focal point of the coat of George IV’s arms and most central aspect of the window is the shield. The shield is quartered, depicting in the first and fourth quarters the three passant guardant lions of England. In the second quarter the rampant lion, and double tressure flory-counter-flory of Scotland, and the third quarter depicts a harp and represents Ireland. The crest borne at the top of the helm is a statant guardant lion wearing St Edward’s Crown. To either side of the crest are further representations of England and Scotland. The dexter supporter is a crowned English lion; the sisnister is a Scottish unicorn. According to legend a free unicorn was considered a very dangerous beast; therefore the heraldic unicorn in the coat of arms is chained. The armorial achievement, positioned at the base of the coat of arms, comprises the motto, ‘Dieu et mon Droit’, which is translated from French to, ‘God and my Right’.
Once the packaged window fragments arrived at my studio and a more thorough analysis of the window was possible it was immediately apparent that large areas of the original glass was unsalvageable and sizeable parts were entirely missing. As evident in the images below, vast areas of the window were ruined possibly due to vandalism or potentially the poor 1955 packing. Whilst utilising as much of the original glass as possible I had to use additional antique blown glass and crown sheet to restore the window to its original splendour.  Large areas of the original coloured glass, most notably the aforementioned Unicorn, were entirely missing or destroyed and therefore whilst following the original design format new sections had to be added. Over a period of six months I extensively restored the window and where glass segments were missing I matched the fresh glass coloration to the original fragments, painted and stained using traditional methods and managed to pair the new segments as close to the original as possible.
The window had to be rigorously and academically restored to maintain the original impetus of the window without altering certain design aspects of the original stained glass artist’s vision. As can be noted in the final window, fitted and presented to Queen Elizabeth II, the restoration was extensive and comprehensive. The original widely damaged fragments were extensively incorporated in the final window and the restored window gives the unearthed segments a new splendour. 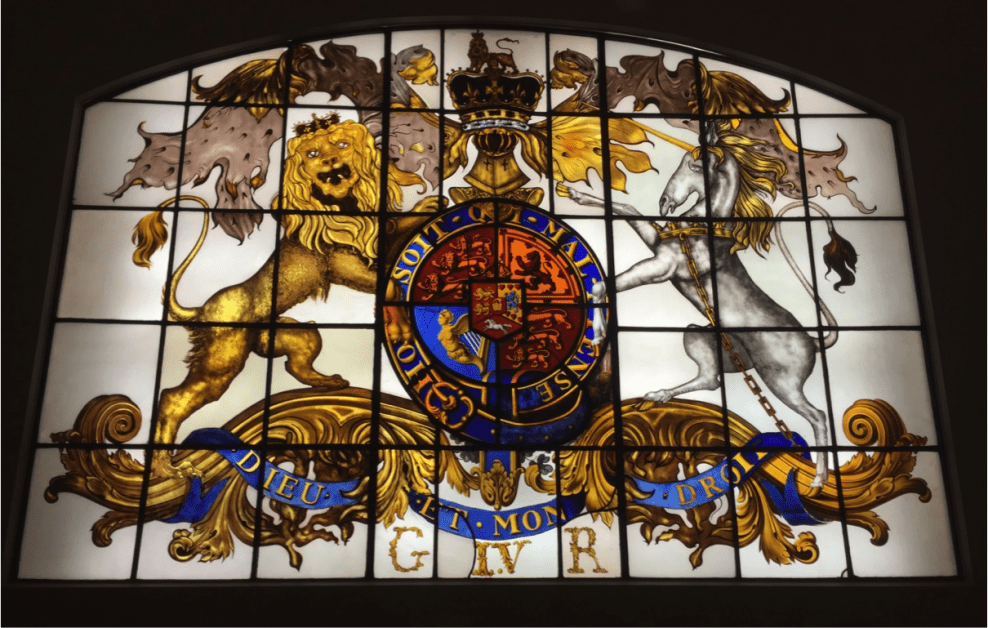 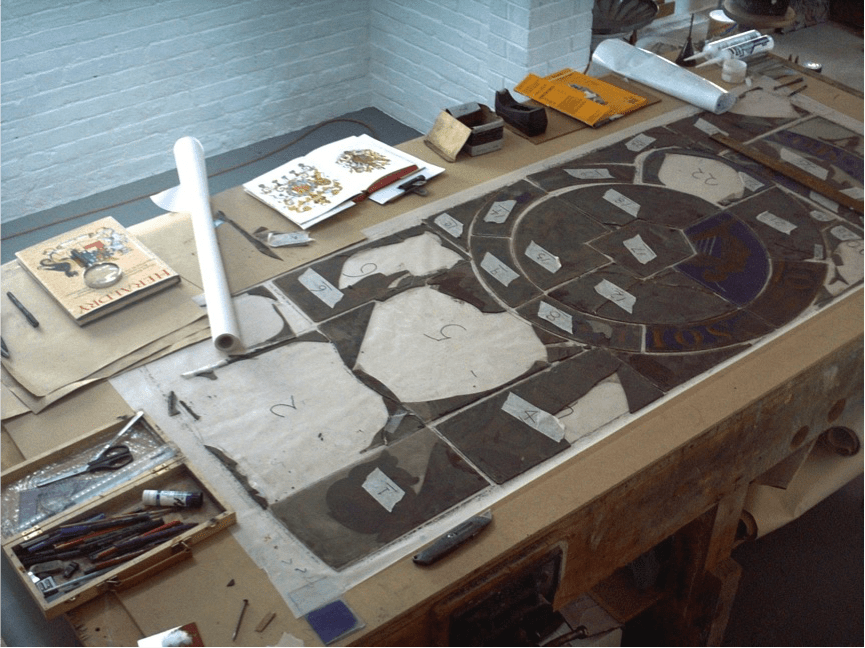 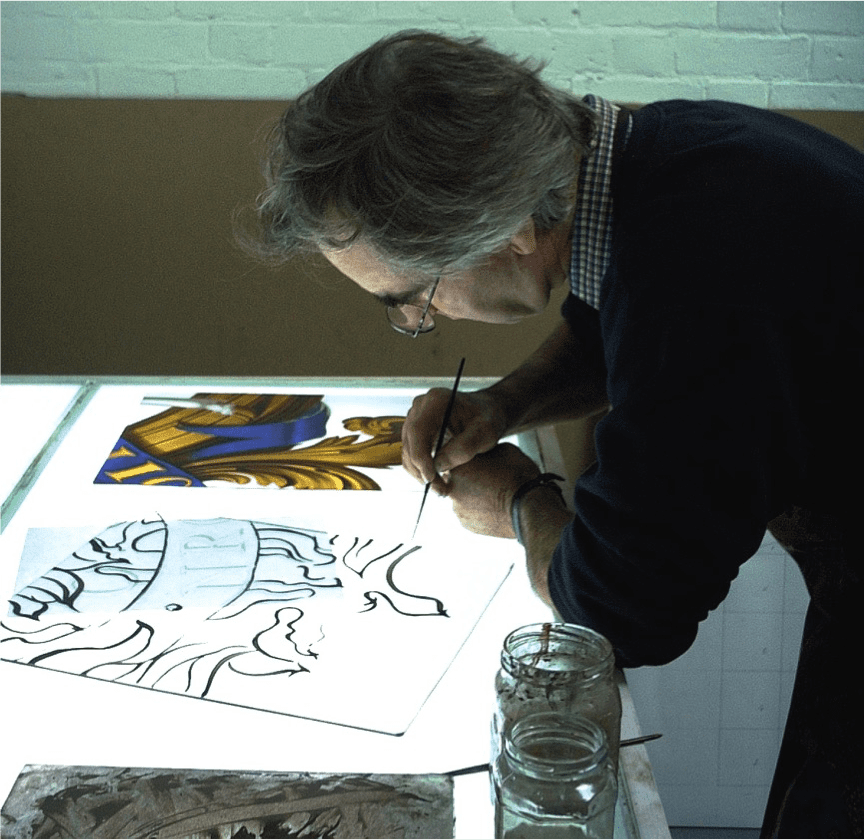 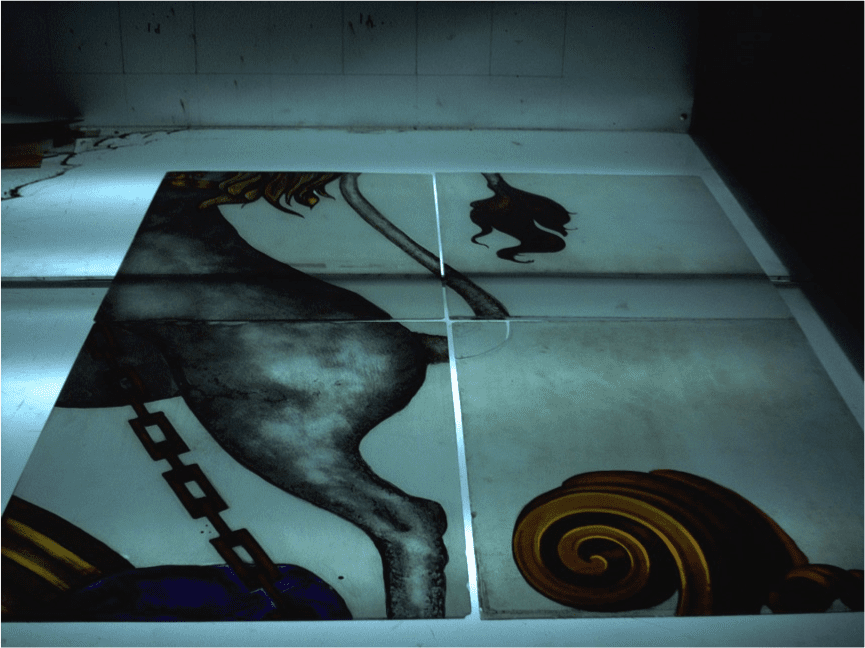 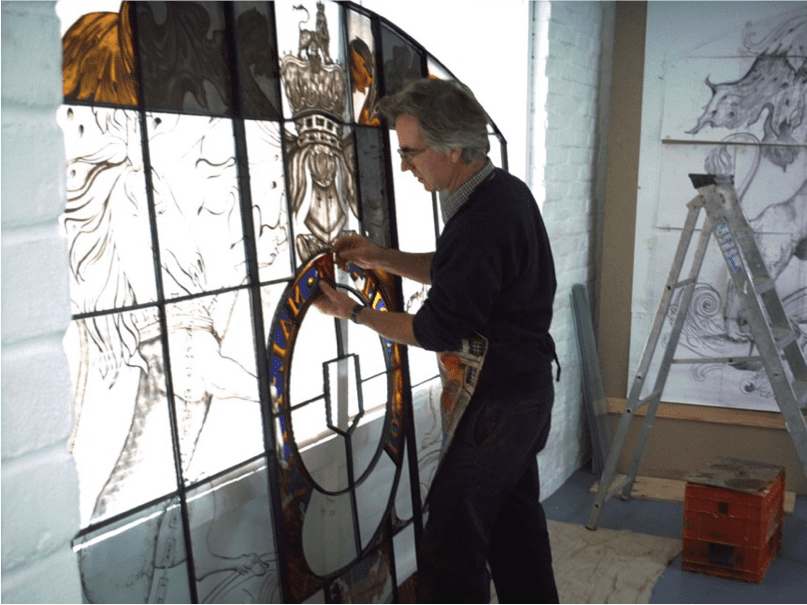 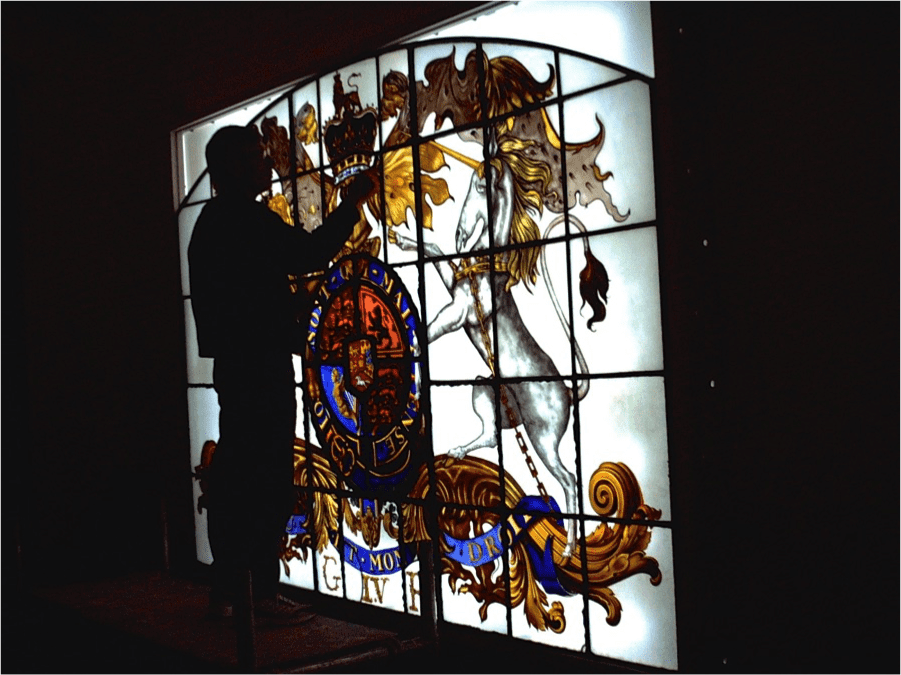 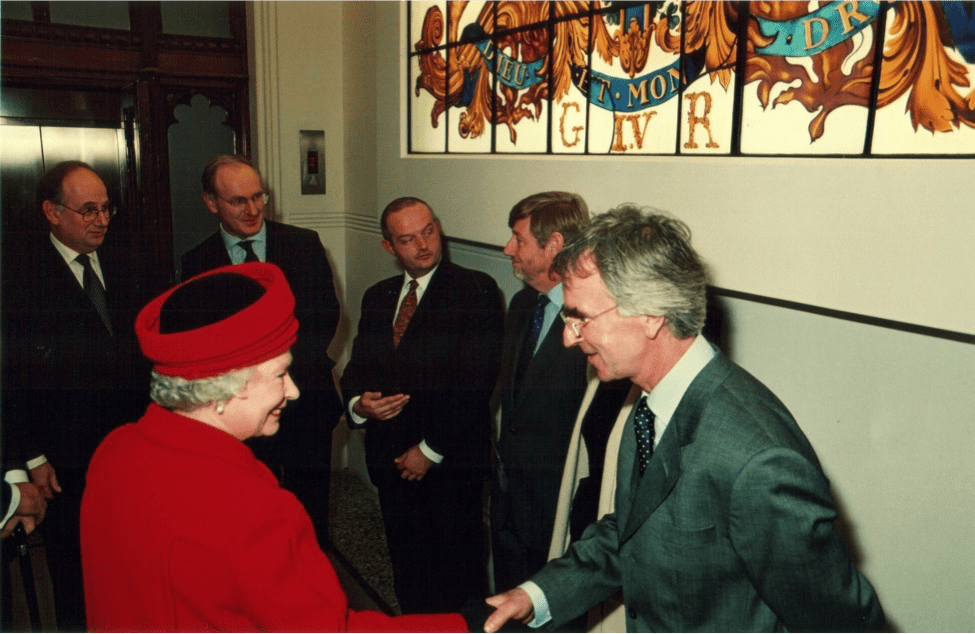