We have been thrilled to recently conserve two wonderful jackets by Elsa Schiaparelli – the first was part of a costume dating from 1937 that came to us for conservation following its purchase by Manchester Art Galleries for inclusion in their exhibition Vogue 100: A Century of Style. A version of the same outfit is known the world over as that famously worn by Mrs. Simpson on the eve of her marriage to the Duke of Windsor and photographed by Cecil Beaton.

As an obviously well-worn and well loved outfit the Manchester Art Galleries version of the costume (matching dress and jacket) showed many external signs of wear and the jacket lining was particularly damaged. However the main area of interest and challenge in terms of its conservation was the unusual trimming of the jacket – which analysis confirmed was cream patent leather with a cellulose nitrate finish further decorated with thick white paint.  This combination of materials has all sorts of issues for handling, cleaning, consolidation and long-term care.

After careful surface cleaning of the silk jersey outer layers the very damaged silk jacket lining was partially disassembled to allow cleaning and full support. The lining was badly soiled from the wearer’s body and make up meaning that the required adhesive support treatment could not be undertaken without solvent cleaning. After testing an appropriate solvent was selected successfully reducing the greasiness of the lining, thus enabling an adhesive and stitched support to go ahead. After substantial work the conserved lining was restitched following the original construction and the repair of the many holes and pulls found in the outer layers of the jacket.

Given that the cellulose nitrate component of the patent leather will continue to deteriorate it was felt pragmatic to undertake less rather than more treatment at this stage. After research it was decided to only minimally clean the soiled patent leather using a non-aqueous solvent and to consolidate only the worst of the delaminating flakes using the conservation adhesive Beva 371™ carried in Petroleum spirit. Patent leather commonly cracks with movement and so reducing the potential flexing and movement of the patent leather trimming was seen as a priority. To this end two ply Japanese tissue was laminated in Melinex™ again using Beva 371™. This was carefully cut to create a support following the shape of the decorations, inserted behind the lapels of the jacket and held in place using minimal stitching utilising existing construction holes in the leather.

The dress was conserved using stitching techniques and a combination of dyed silk support patches and dyed net overlays so that it could be safely displayed with the jacket once more at Manchester Museums. A padded flat mount was made for the jacket for safe transportation and storage and once back in Manchester the costume was mounted by the museum’s costume mounter for exhibition.

The second Schiparelli jacket from the same collection, again dating from the late 1930’s was even more well-worn than the first having very obviously been a prized piece of vintage fashion in its later life. The beautiful purple velvet had been battered and bruised, altered, torn and repaired many times over and some of the colourful pink and yellow, Oriental inspired silk tassel trimmings were also missing.

After thorough surface cleaning some of the old alterations and repairs were removed as despite being evidence of its past use it was felt that they were now compromising the structural stability of the jacket. All the weak areas of velvet were supported onto dyed silk patches and secured with stitching.

Interestingly the construction of both Schiaparelli jacket linings was very similar and as with the first, the silk lining of this jacket required much stabilisation to make it strong enough to withstand regular periods of mounting and display.  Even after conservation the vulnerable sleeve linings required further protected with an inner lining of dyed net that can be removed if necessary in the future without compromising the conservation. 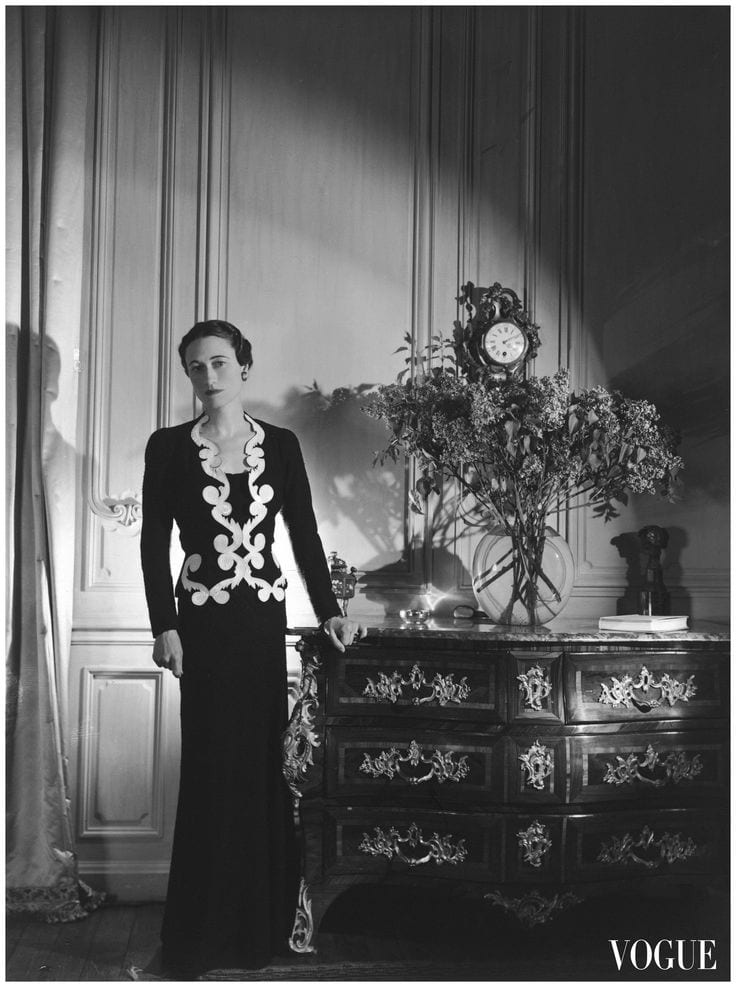 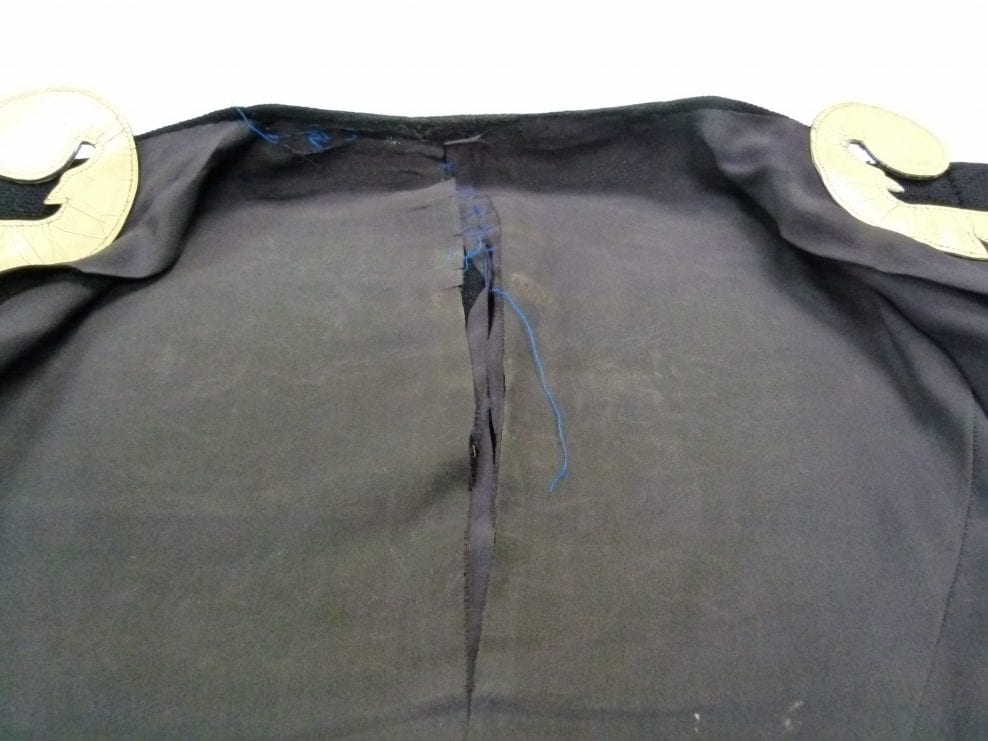 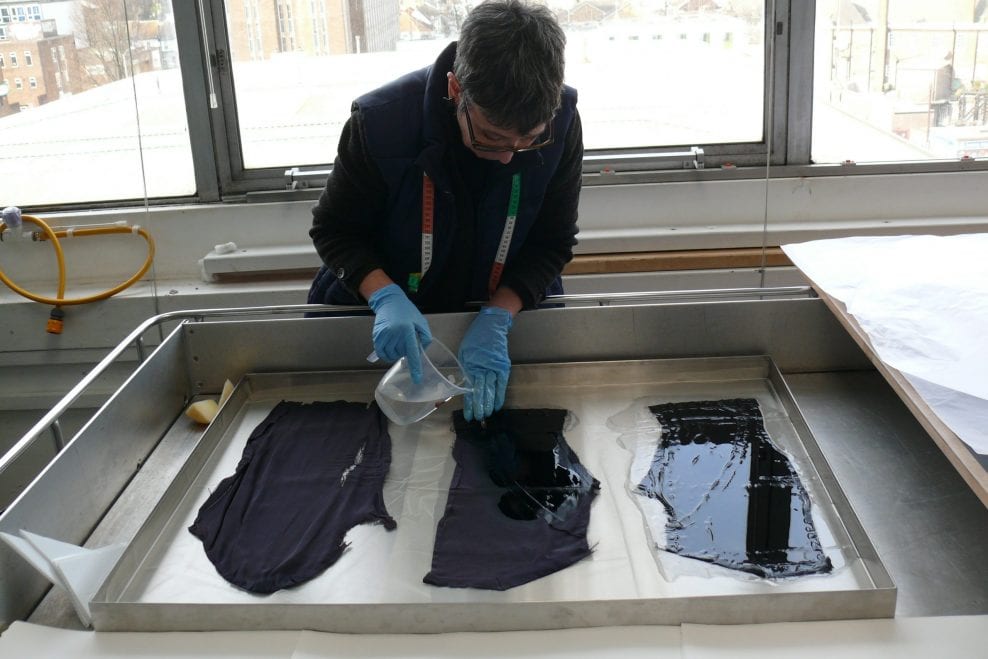 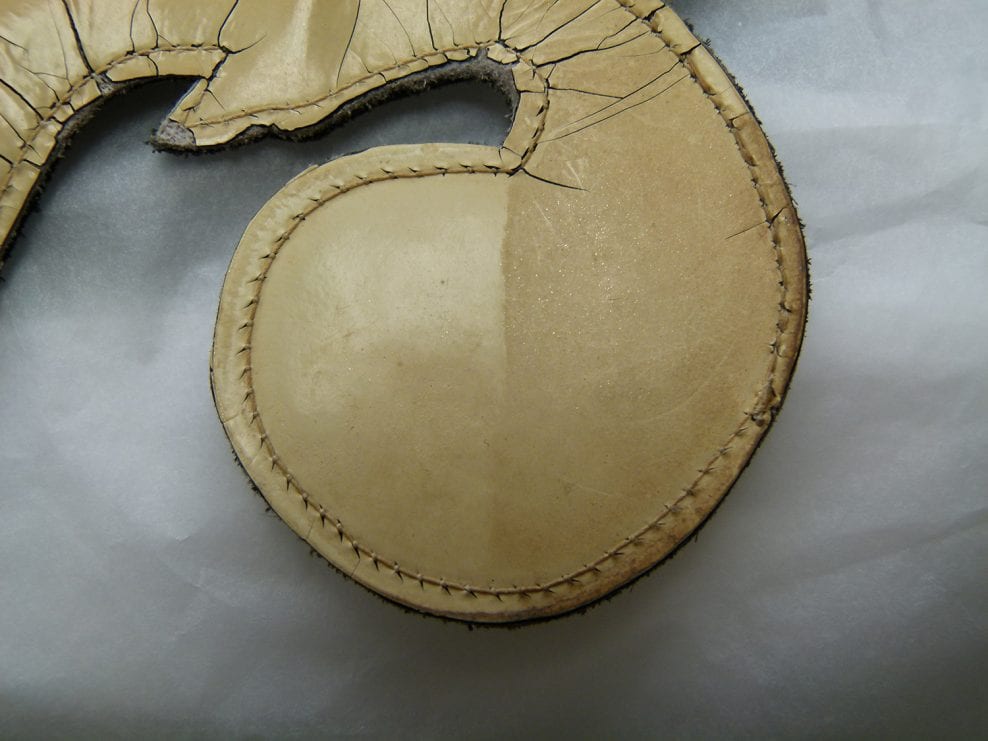 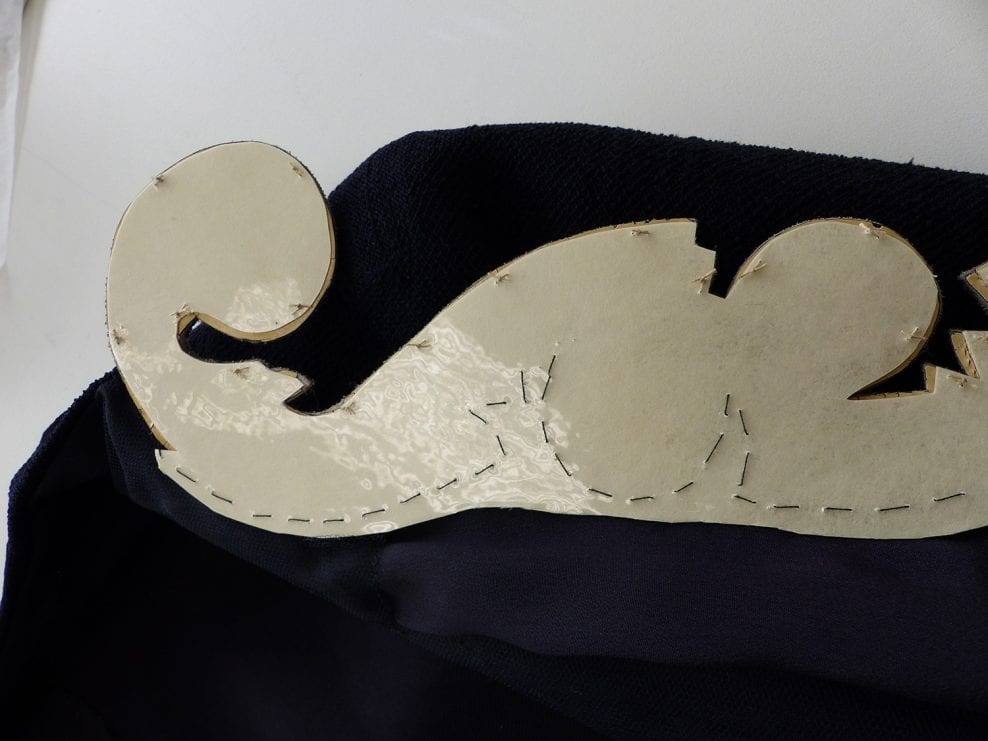 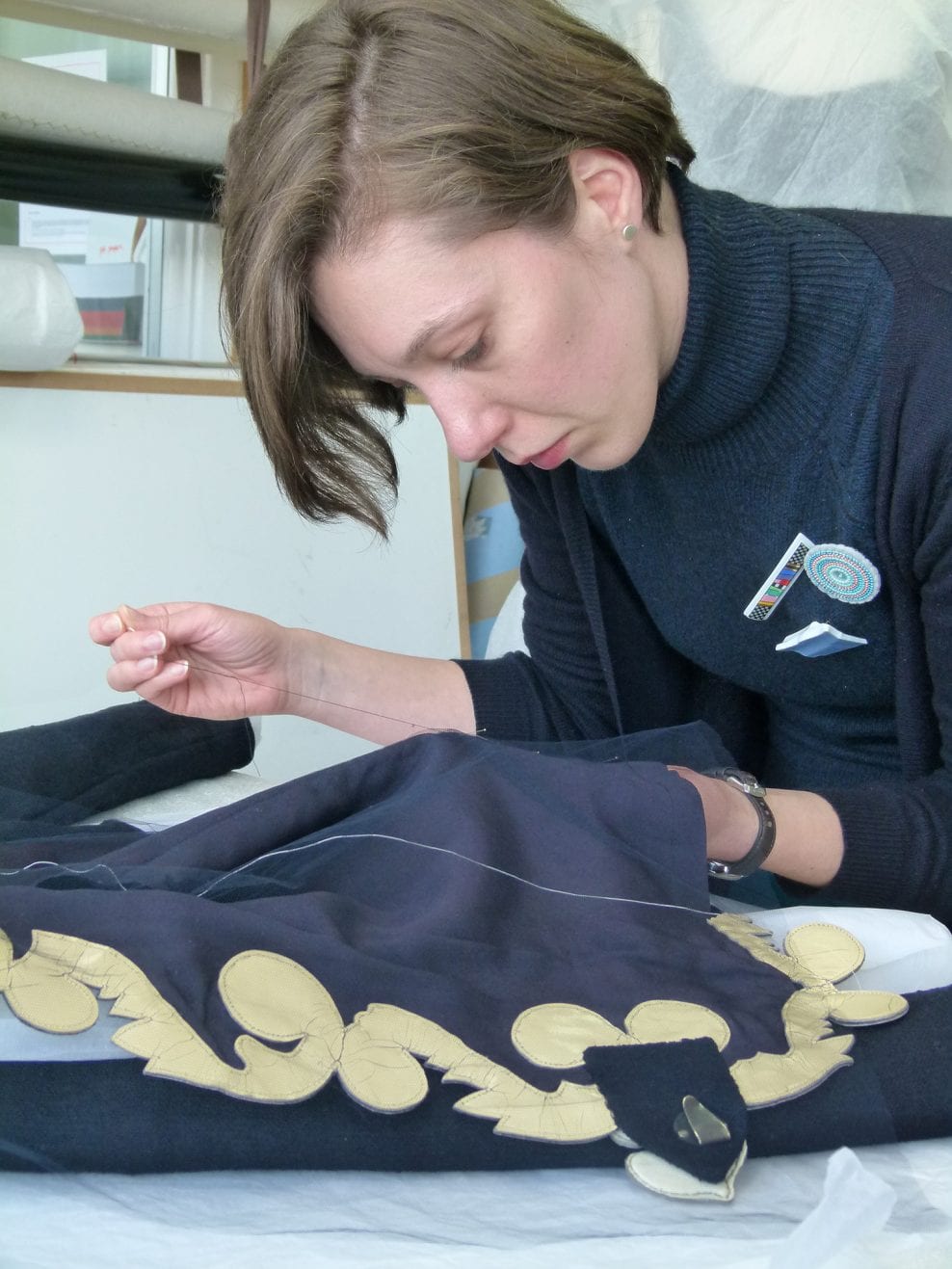 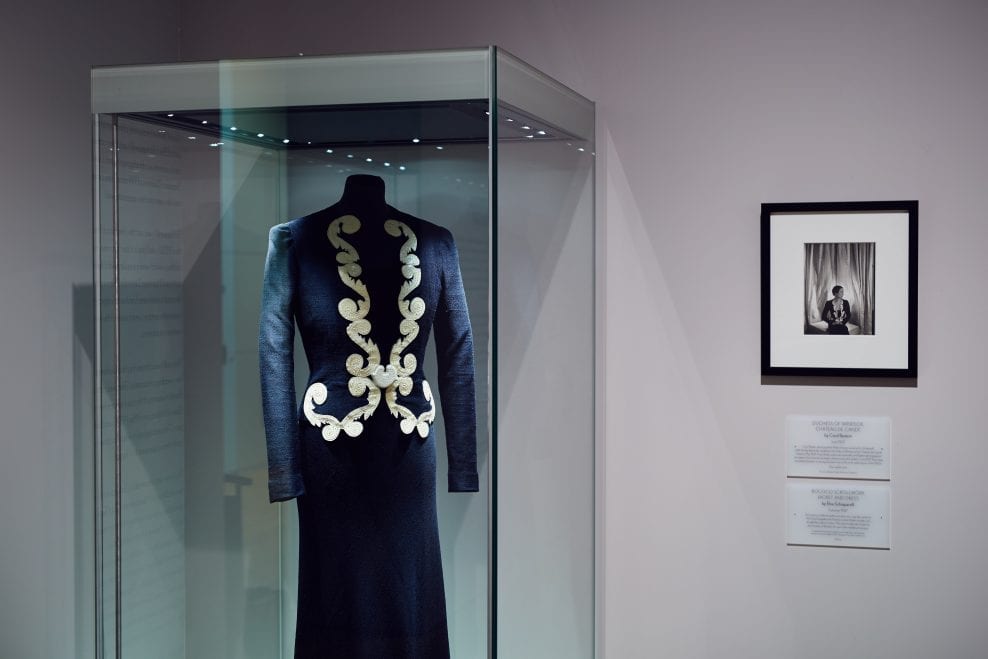 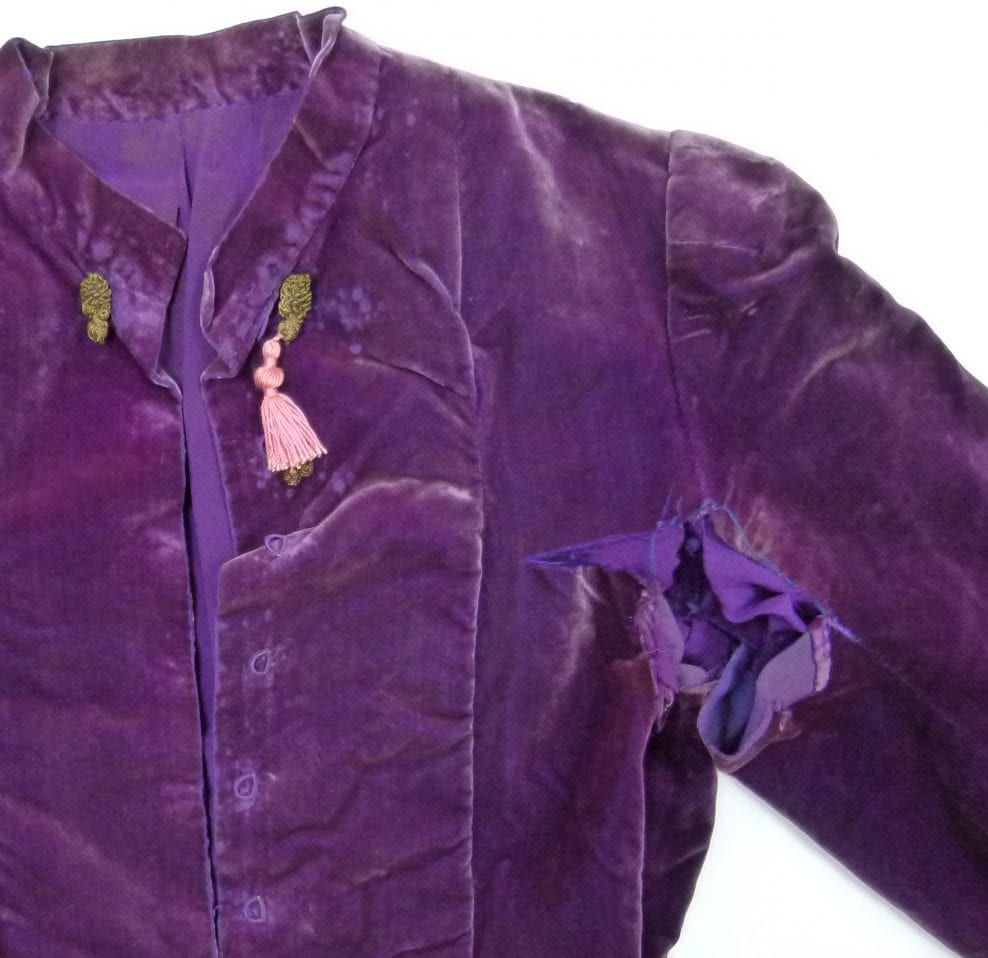 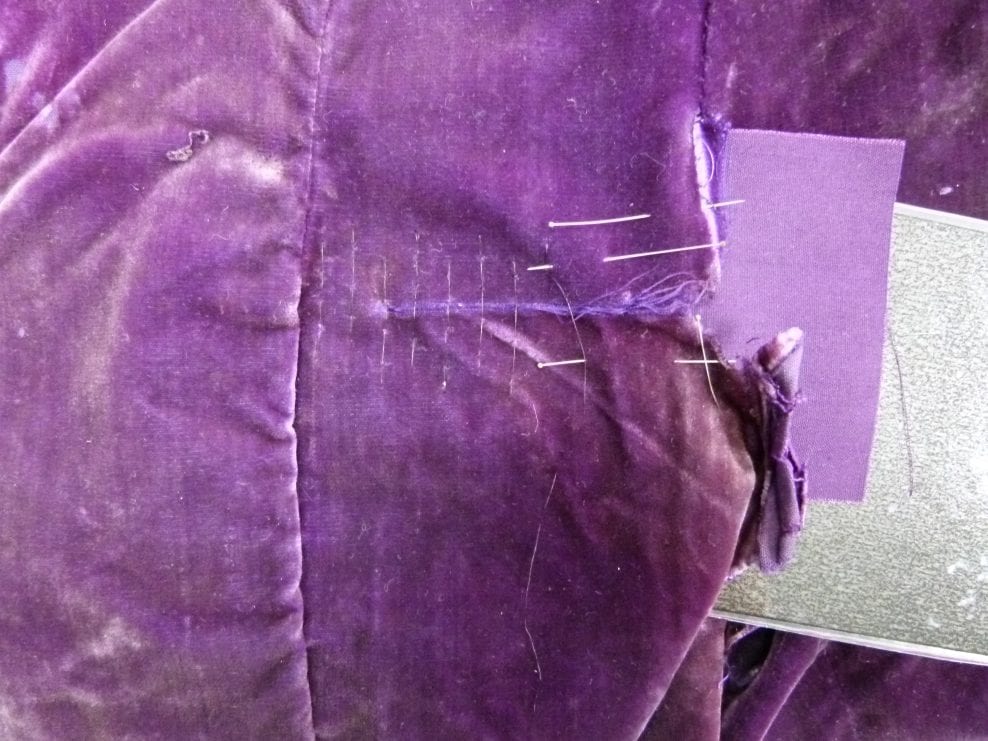 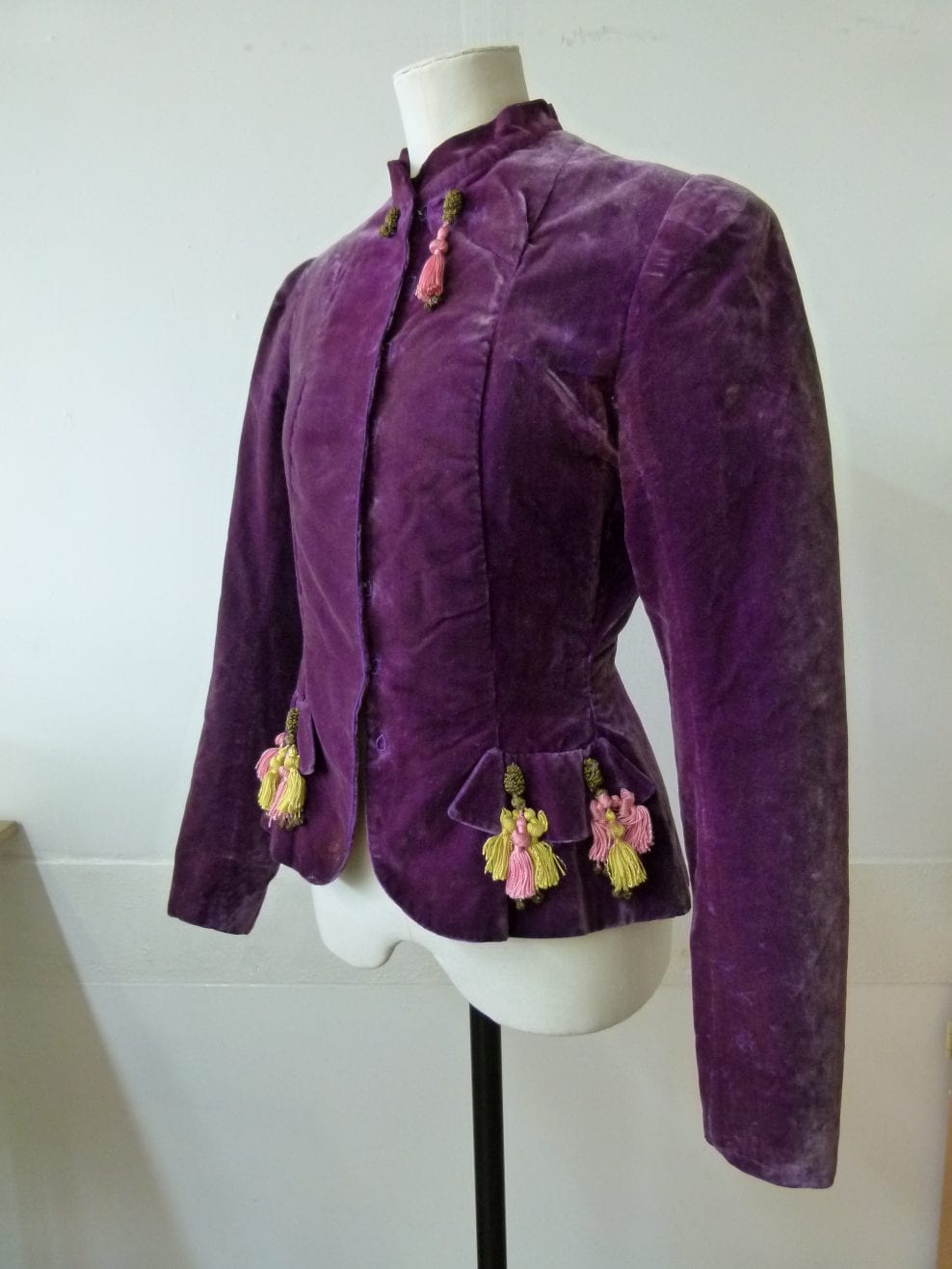 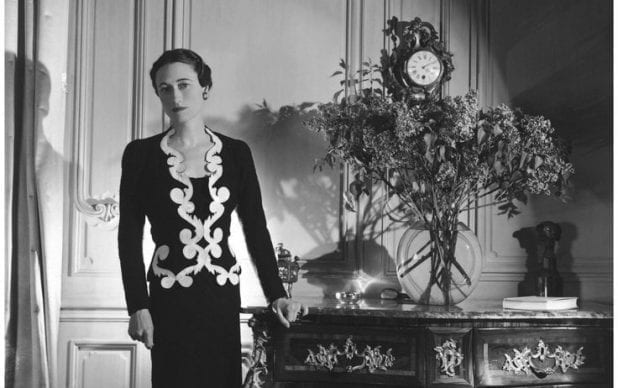