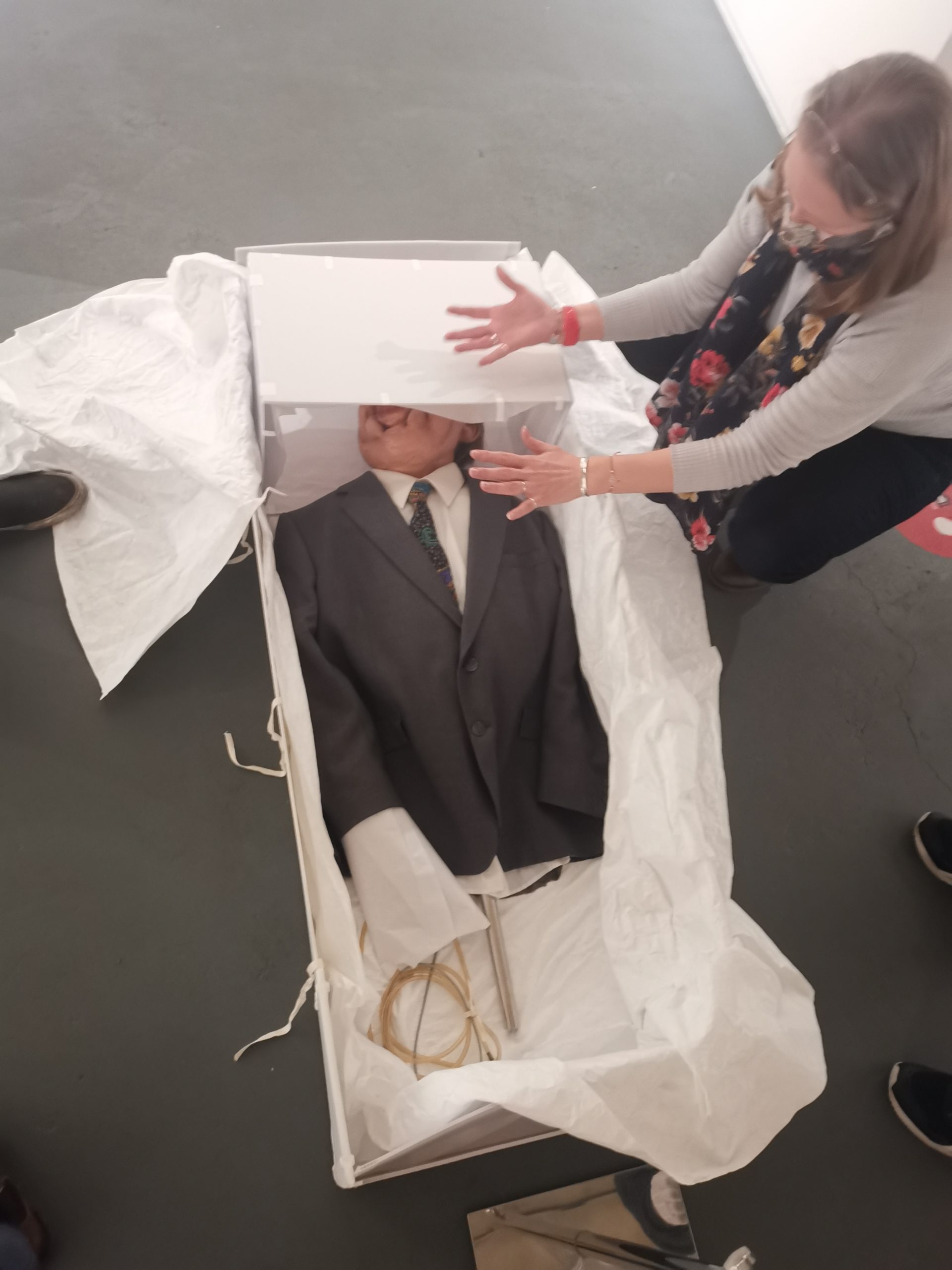 In 2021, The Cartoon Museum received a grant from Icon’s Collections Care Stimulus Fund, made possible through the generous support of the Radcliffe Trust and others.  The grant enabled them to fund the conservation of an original Spitting Image puppet in the Cartoon Museum’s permanent collection.

An Object of Historical Significance at Risk

The puppet is of historical significance. Its conservation is important to the preservation of a significant aspect of British popular culture for future generations. The puppet is a life-sized caricature depiction of Roy Hattersley, Deputy Leader of the Labour Party 1983–1992.

Spitting Image is a British satirical television puppet show created by Peter Fluck, Roger Law and Martin Lambie-Nairn. First aired in 1984, the series was one of Britain’s most-viewed television shows of the 1980s and an influential aspect of popular culture, taking political satire to a broad general audience.

The puppet is made of a polyurethane foam main structure and painted latex foam for the figurative features, such as the face and the hands. It is completed with clothing, hair, glass or plastic eyes, plastic tubes and metal wires to perform the spitting and blinking features of the caricature. The various components head, torso, arms and hands are joined together by the means of metal rods bolted together and mounted on and a stainless-steel mannequin stand.

Prior to conservation, it was showing signs of degradation. This came to the Cartoon Museum Curator’s attention when she noticed flakes of foam from the internal puppet which had fallen onto the object mount. The Cartoon Museum do not have an internal Conservator and therefore require external expertise to assess the extent of degradation and conservation needs, and to stabilize the object and mitigate further degradation. 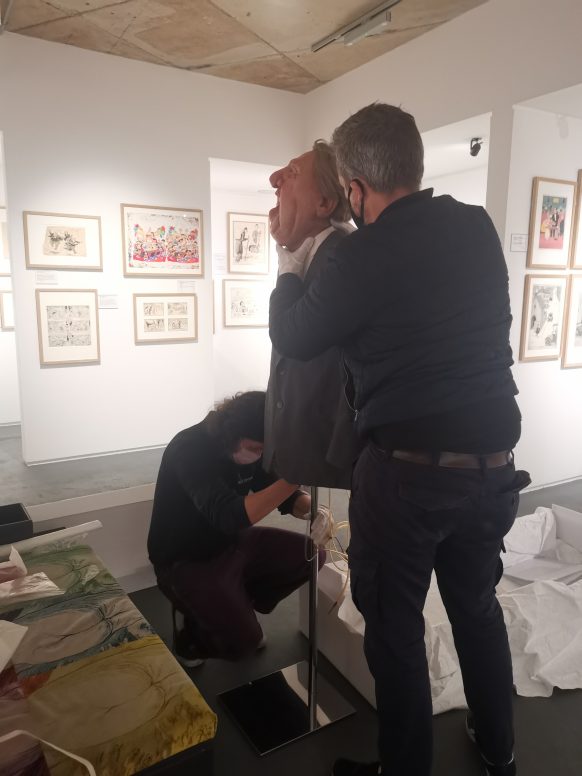 The Cartoon Museum reopened to the public in May 2021 following 14 months of mostly being closed due to the coronavirus pandemic. The Museum is a charitable trust and receives no funding from government or local authorities. Our income comes from visitor admissions, retail, events and learning workshops – all suspended during closure. Visitor numbers have also been slow to recover as life slowly returns to normal, meaning a continued shortfall of income. The Museum is facing financial difficulties and there was no budget available to fund the conservation of the puppet.

Prior to treatment, the puppet had a sticky surface that was even sticking to glassine. This is due to the migration of plasticisers particularly on the hand and proper left side of the face. The interior foam was severely degraded and detached and crumbling to fine powder.

Where the latex was sticky there were accumulations of loose degraded foam particles adhered to the surface. The cracks in the latex had led to degradation of the foam substrate and loss of material leaving a thin, brittle skin of latex vulnerable to further loss. Oxygen, moisture and light ingress into cracks was further accelerating degradation. Numerous major areas of cracking required urgent treatment.

The costume had heavy particulate soiling, mostly due to the disintegration of the foam of the puppet. 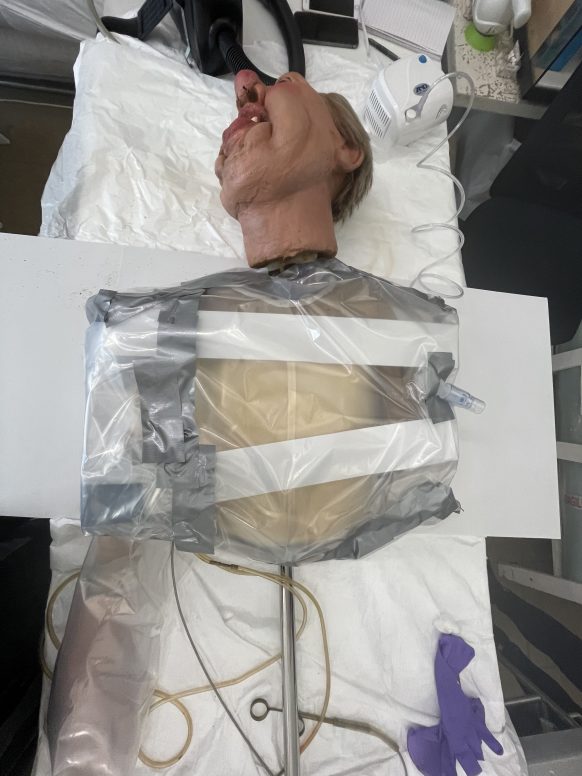 Janie Lightfoot Textiles Conservation Studio removed migrated plasticisers from the surface of the puppet. The foam was treated to reduce the amount of crumbling. The tears and losses to the latex were stabilised, filled and retouched and the costume was cleaned, stabilised and degradation products removed.

The conservation team explained that “the best conservation treatment for synthetic foams is always preventive conservation. Foams differ from each other in their care needs. The exact recipe of each, including its range of additives, influences how it will age, even the pigment used to colour an otherwise identical object can cause objects to age differently.”

“There are no standard interventive processes for foams. Interventive treatments present risks of further damage to objects due to potential reaction between treatment and object.” 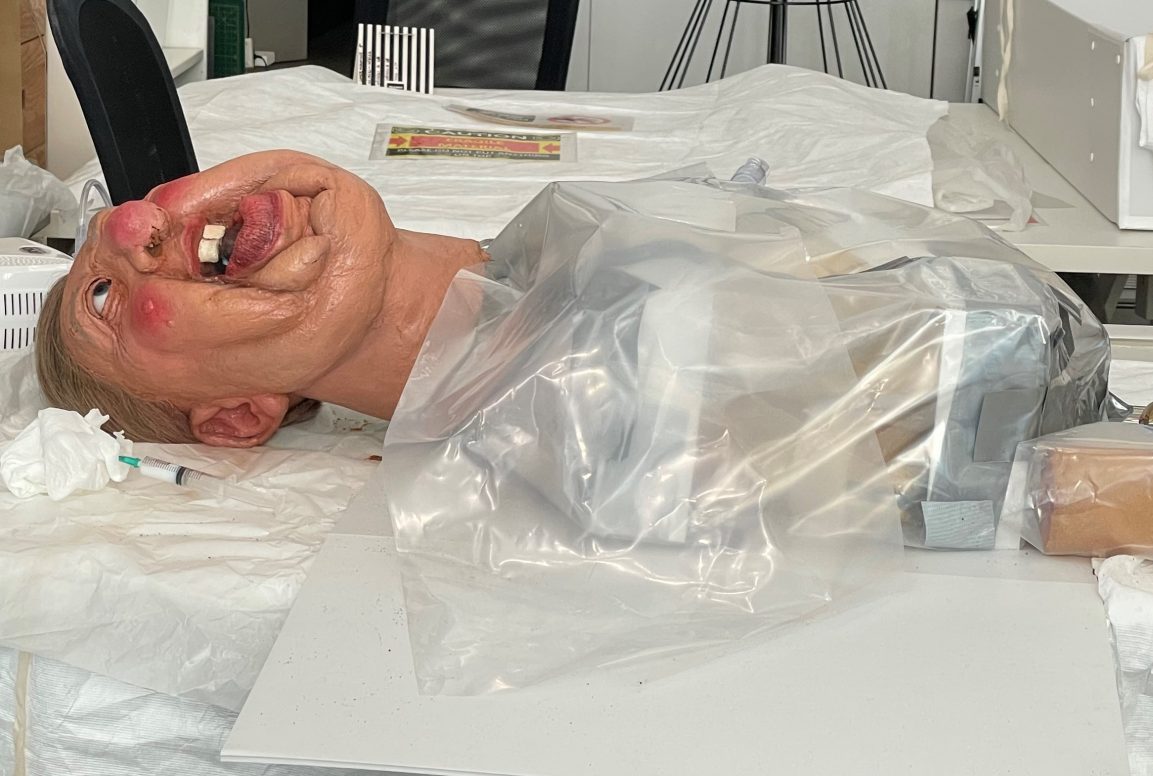 They added: “the research on conservation of plastic is relatively new and on-going. Coming up with the right approach and materials to stabilise the degraded and powdering foam was quite challenging. Due to the crumbling nature of the foam, it was important to attempt to consolidate as deeply as possible, preferably throughout the entire thickness of the foam. The adhesive needed to be strong enough to withstand minimal handling while retaining the original flexibility, there were many aspects to consider.”

Janie Lightfoot Textiles Conservation Studio base their approach on sound research in the field and thorough testing before carrying out any treatments. They source materials that are conservation grade and have proofed aging qualities.

The actual treatment of the puppet took around 36 hours on the bench plus the conservation of the clothing. This was preceded by hours of thorough analysis of the condition to narrow down the treatment options, testing of selected approach and materials, and preparation work, before starting the actual treatment. 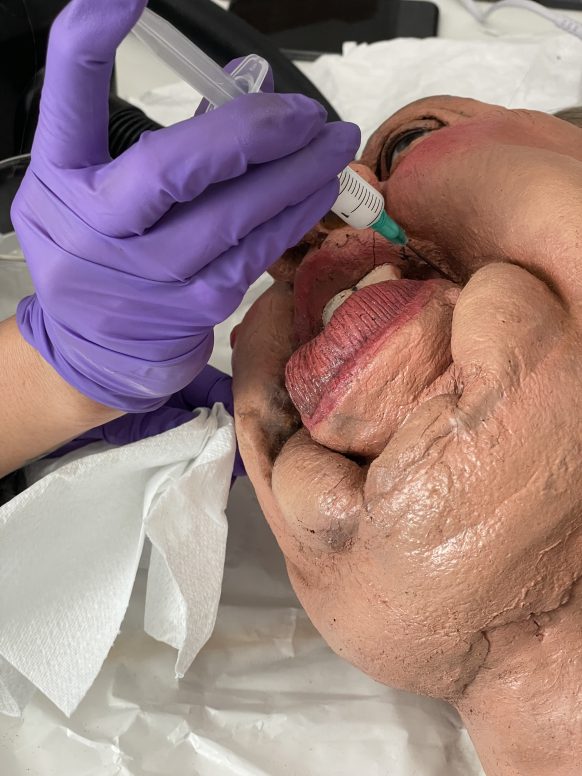 Roy is now back on display at The Cartoon Museum and looking better than ever! The grant facilitated the preservation of an historically significant object for future generations of visitors and researchers. It also enabled one of the museum’s most popular objects to remain on public display and supported the development of new interpretation which enhances visitor engagement.

Finally, the project created a new relationship between The Cartoon Museum and Janie Lightfoot Textiles Conservation Studio and made possible a ‘behind-the-scenes’ insight into museum object conservation for the Museum’s visitors and friends through a blog post, social media and e-bulletin. 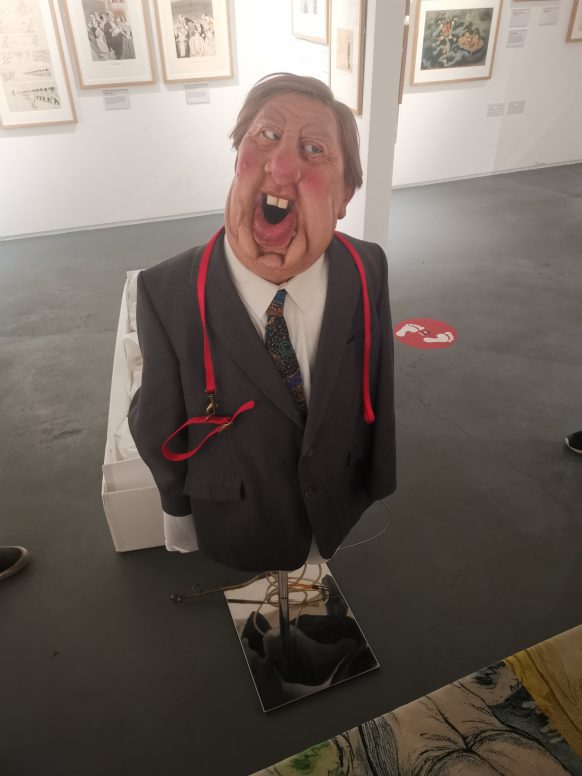 About The Cartoon Museum

The Cartoon Museum champions cartoon and comic art, highlighting its value to culture and society with a nationally important collection of more than 5,600 British cartoons, comics and caricatures, and a library of 18,000 items. Since 2006, the museum has received 420,000 visitors, over 50,000 children and adults have attended cartooning, comics and animation workshops, and the museum has received 3,000 student visits each year. Through a programme of exhibitions, events and workshops, the museum is driven by a mission to collect, conserve and provide access to Britain’s cartoon, caricature, animation and comic art heritage, encourage participation in and raise awareness of a popular artform and support new work by cartoonists and comic artists and support Britain’s cartoon and comics communities.