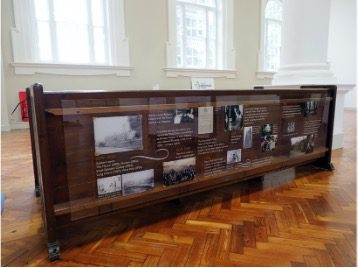 A community-led charity project saved and renovated the building, transforming it from its semi-derelict state into a stunning new cultural venue ‘The Horton’ – with the help of a £1.7m grant from the National Lottery Heritage Fund.

The Horton features a permanent exhibition about the history of the hospitals and the people who lived and worked there, re-using original pews and chapel furniture.

The Horton was originally due to open in 2020 but delayed. The impact of Covid-19 led the team to review the design of the heritage interpretation to include wipeable surfaces and reduced touch points.

These materials enrich the experience for visitors as well as ensuring the interpretation fit seamlessly into the look and feel of the building’s atrium.

Previously specified audio points where visitors were going to hold the same fixed device to their faces, were replaced with QR codes and digital display points on the pew where visitors can listen out loud or plug in their own headphones.

The grant contributed to the design and build costs of the exhibition.

During initial conversations with TruVue, it was agreed that the company would provide a printable acrylic panel for a timeline on the back of the pew but global shipping delays and a maximum size limitation of the product led us to review this.

Instead, we opted to use TruVue’s Optium Museum Acrylic® at 6mm to cover the front face and drawer of the bespoke Cabinet of Care that was being constructed from reclaimed furniture.

The Cabinet is one of the most remarked upon pieces in the exhibition.

Despite further Covid delays, a special Exhibition Preview Weekend was held in September 2021, as part of the national Heritage Open Days festival.

With restrictions still in place, this was limited to 15 pre-bookable free tours over two days. Tickets were fully booked within days of being released and more than 250 people visited the exhibition.

In the ramp up to fully opening The Horton to the public this spring, more than 1200 visitors attending 17 live performances in December 2021 were also able to visit the exhibition.

The response to the exhibition from visitors so far has been effusive. People have learned about the scientific and social heritage of Epsom as Europe’s biggest psychiatric hospital cluster. More than half of the visitors to our preview weekend completed a feedback form and describing it with words including: ‘inspiring,’ ‘moving’ and ‘beautifully done.’

From spring, the exhibition will be free to view for all visitors to The Horton and the project team and volunteers will continue to gather further information and artefacts from the community to add temporary themed exhibitions to the permanent displays. A formal launch event will be scheduled for later this year.