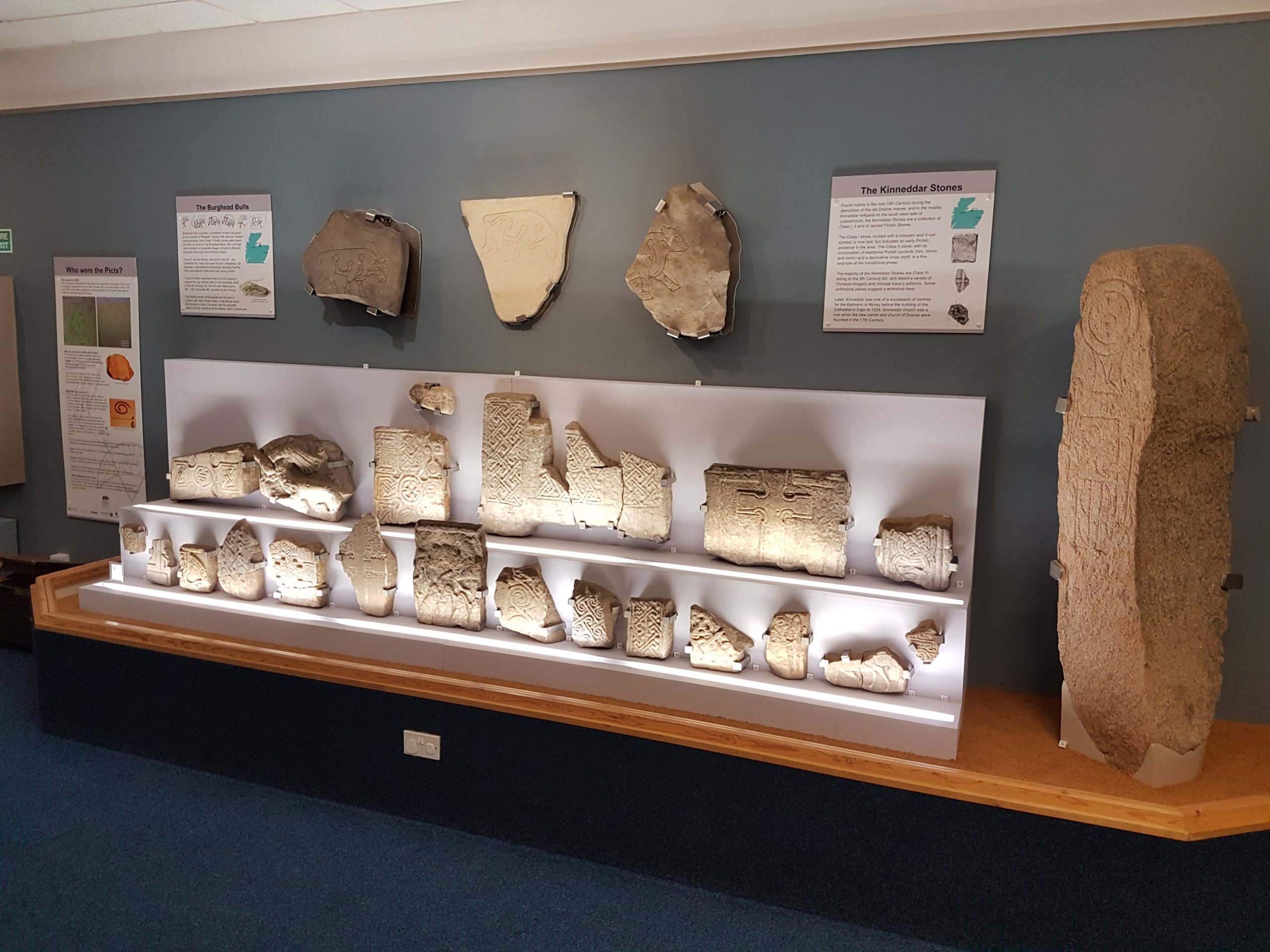 The Early Medieval/Pictish sandstone cross fragment was found on the beach at Kinloss near the mouth of the River Findhorn, Moray. It was taken to the Falconer Museum, Forres and reported to the Treasure Trove Unit in Edinburgh.

Acquisition and display of the stone in Elgin Museum was seen as particularly important because of the unusual design of the central boss which is a close comparator with that of our Class II Pictish stone from Kinneddar (Drainie 32). As the finder could not be traced, when it came to allocation to an Accredited Museum, and Elgin Museum’s bid was successful, there was no finder fee to pay. We borrowed the stone for the Pictish Art Society’s AGM and Conference at Elgin Museum in 2018. John Borland, late of HES/RCAHMS and PAS Secretary offered support from the Society and to take the stone down to Edinburgh. 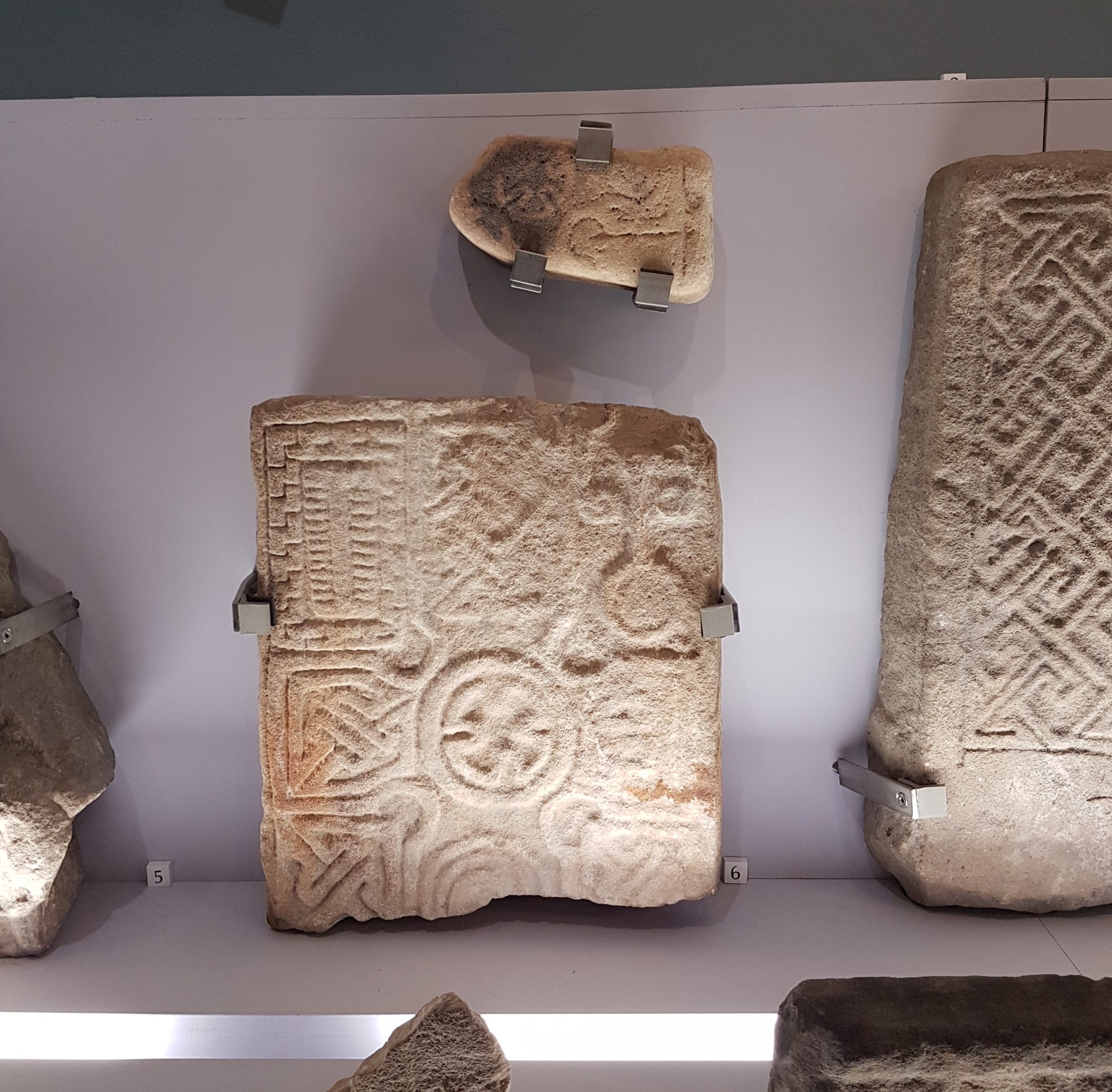 Once the grant from Icon was confirmed, we were able to arrange for Graciela Ainsworth’s conservation team to start work. The PAS’s offer to make up the grant deficit of some £450 was also approved. Between lockdowns, the stone was collected and conservation begun – this largely involved desalination. Her company had conserved our other stones and carried out the major project of their re-display to include the Dandaleith Stone, acquired in 2013.

Display of the stones is in bespoke stainless-steel clamps onto a backing board on a plinth. (See photos). One of the specialist team from the earlier project was well placed to incorporate the Kinloss stone into the existing display. This relatively small fragment needed to be sited where its stylistic features could best be appreciated in the context of Drainie 32. Most of the stones had to be removed to get access to the rear of the backing to secure the bolts but this was all done in a morning; at that point in the Covid saga, the two workers were also able to share a car. 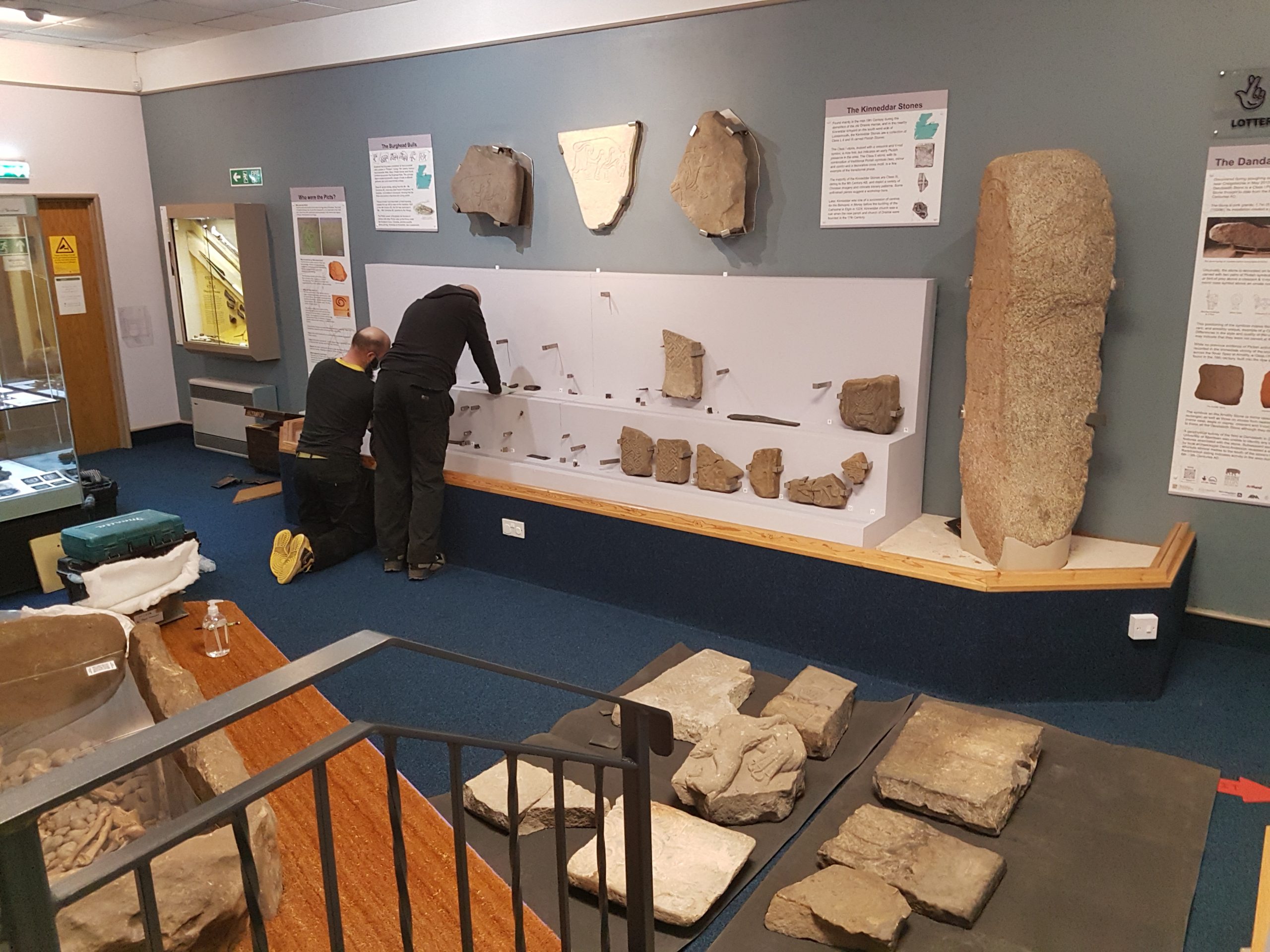 The stone is now available for staff and ad hoc visitors to enjoy; we shall not start opening to the public for the season until after Easter but will publicise the good news of the stone’s instatement through our social media, website and newsletter, with due reference to the funders. Our carved stone collection is much appreciated by the many with a special interest in the Picts and for example our regular archaeology student visitors from Aberdeen University. One more task is to describe the stone for a 3rd edition of our in-house publication: The Pictish and Early Medieval Carved Stones in Elgin Museum, using John Borland’s drawing.