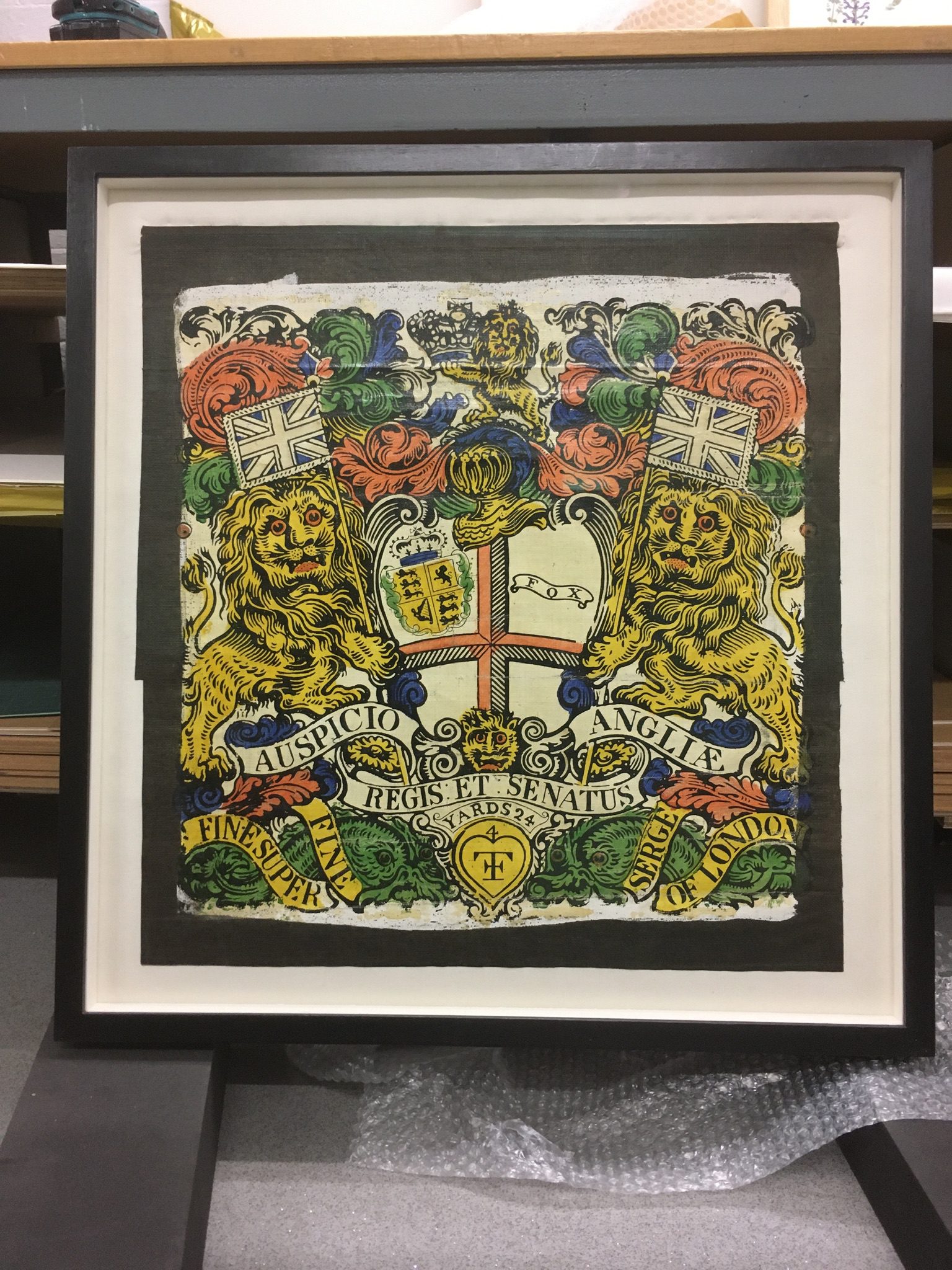 In 2021, we were very grateful to receive funding from Icon and the Radcliffe Trust for an important project to conserve a historically valuable textile belonging to this Museum. The grant was used to fully conserve, re-frame and re-glaze an 18th-century tillet for safe display.

A tillet was a loose outer canvas cloth wrapped around a bale of woollen cloth, usually serge, for export in the 16th-18th centuries. Part of a tillet always had a colourful design stamped on it showing the name of the manufacturer, in this case ‘Fox’, the company that operated Coldharbour Mill textile factory for about 200 years. The Fox Company exported cloth from its several textile manufactories in South West England to many countries of the world from the 18th to the late 20th century, and this tillet dates from the early years of their operations.

A tillet is a small but very important piece of textile art – manufacturers were keen to distinguish their products from others as quality products by having their tillets decorated attractively. Tillets are also extremely rare as they were usually discarded or repurposed after arrival of the goods at their destination abroad. This almost unique piece has only survived because it was never used for its original purpose.

The tillet, or rather the decorated part of it, which measures 47.5cm x 49.5cm, had been folded, then later unfolded and framed inappropriately for display – the frame was too small, without a spacer between the painted surface and the glass, with risk of paint attaching to glazing if left, the plain glass offered no protection from light damage, and was reflective, preventing a good view of the object. When the item was rediscovered, it was then kept in safe storage to protect it from further damage.

The main aspects that required treatment by the conservators were structural damage from being folded, and surface damage, chiefly paint loss and fading from earlier unprotected exposure to light. The treatment included cleaning, humidification to reduce creasing and distortion as much as possible, and mounting on a padded board to provide support – this was carried out by the Textiles Conservator – followed by stabilisation of the paint by the Paintings Conservator. It was then reframed by the Conservation Framer using non-reflective glass specially treated to minimise damage from light and UV radiation when on display, and with an appropriate space between the fabric and the glass. It will be displayed in an area of the Museum which has solar control film applied to the windows, to further protect it and the other textiles to be displayed there.

The main outcomes of this project will be greater understanding of textile history by the visiting public, the local community and researchers, and also of the value of conservation, through enhanced accessibility of this exhibit. The value of the conserved tillet is immeasurable in historical terms owing to its rarity, being one of only three known to be held in UK museums.

This project will benefit Coldharbour Mill by enabling the tillet to be included in pride of place in a new display of Fox Company historic textiles which we hope to open in late 2022. The resulting publicity will boost the profile of this Museum and other museums with historic textiles on display, as well as the grant providers.

Given the importance of the Museum collection, both regionally and nationally, visitors and researchers will benefit from being able to view an extremely attractive and rare exhibit. It will be displayed with examples of the tamper-proof lead seals that were used to secure the tillets on the bales of cloth for export. For members of the local community particularly – many of whose forebears worked at the Mill, and many of whom are nowadays involved through volunteering – local pride will be enhanced by seeing this rare and striking object on display.