‘The Madonna and Child, with Infant Saint John’, attributed to a pupil of Domenico Puligo (1492–1527)

This project involved the conservation treatment and technical analysis of an early sixteenth century panel painting ‘The Madonna and Child, with Infant Saint John’, attributed to a pupil or an artist in the ‘circle of’ Florentine Master Domenico Puligo, from the collection of OnFife (Fife Cultural Trust).

The main aims of the conservation treatment of the picture were to ensure that the panel was secure and stabilised for the future, and that the true nature, colours and quality of the image were revealed in all their glory. At half a millennium old, the panel also needed to be properly housed and protected by the framing, and the whole ensemble treated together, so that it not only looked its best but also formed a protective, stabilising environment for the ongoing preservation of the artwork.

Panel – The panel was thoroughly examined, cleaned, and stabilised. Loose dust and ingrained grime were removed from the reverse and edges, and the old repairs and additional batten checked for signs of damage and weakness, or potential stresses they may cause in the original support. The extensive woodworm damage, with clear channeling and ‘honeycombing’ of the structure in places, was treated and stabilised. Insecticide, followed by a consolidant and then a lightweight inert filler were injected, with a syringe and fine needle, into every borehole and channel. The damages were then coated with coloured filler and toned to make them more sympathetic to the overall look of the panel.

Painting – The painting was surface cleaned, and the layers of very discoloured varnish and overpaint removed. The cleaning process identified at least two continuous layers of natural resin varnish, with dirt and extensive overpaint trapped between them; extensive residues of older, more discoloured, varnish and overpaint were also revealed below. Much of the varnish and more recent overpainting were removed by careful cleaning with swabs of solvent; with these obscuring layers removed, the original image was revealed to still be in excellent condition. The older varnish and overpaint residues were more tenacious, and had to be painstakingly removed with further cleaning and very careful shaving with a scalpel, which was carried out under a stereo binocular microscope. Following cleaning, a protective and saturating isolating varnish layer was applied across the surface, before the panel was filled and retouched. Careful observation of the panel, along with historic examples of Puligo and his contemporaries’ work, informed the retouching process. Final varnishing gave the picture an appropriate subtle, saturating finish.

Frame – The frame was surface cleaned and stabilised, with the hinged door removed to improve access and allow it to be treated separately. Lost areas of the ornate decoration were moulded from corresponding remaining areas, new sections cast, and the frame design carefully reconstructed. Testing revealed that it was not possible to safely remove the very heavy bronze overpaint, so the whole frame was consolidated and sealed with a layer of glue size, before damages, blemishes and recast sections were toned to match the look of the surrounding frame. The rather drab discoloured bronze finish was given more depth and life with further toned glazing and size applications. New museum-grade, UV-blocking, low-reflective glazing was fitted to the integral door, which was reinstated and secured to the face of the frame. At the reverse, new gilt slip sections, toned to match the rest of the frame, were secured to the rebates, and then lined with carefully shaped sections of cushioning foam that matched the contours of the panel at the extreme edges, so that the painting could be safely accommodated and supported in the frame. The painting was further protected at the back of the frame with a build-up, and continuous layers of cushioning foam and backing material, to provide a stabilising and secure environment for the future preservation of the artwork.

Throughout the conservation process, in-depth technical analysis and research was carried out, to both shed light on the nature and materials used in the construction of the artwork, and to inform the conservation treatment pathway and processes.

Samples were taken, for cross-sectional analysis and pigment identification, by specialists at the Kelvin Centre for Conservation and Cultural Heritage Research, at the University of Glasgow. Under powerful magnification, ultraviolet examination, and molecular analysis using Fourier transform infrared spectroscopy, these samples revealed the complex, multi-layered structure of the surface coatings, and the nature of the vibrant palette of the artist. These were found to be consistent with the materials and methods employed in Florence during the Renaissance. Azurite, for example, was identified in the blues of the Madonna’s robes, and deposits of dark black carbon, in a clear layer above the ground and below the paint, indicated that the artist had very likely applied marking, such as an underdrawing, to the prepared panel before the execution of the painted image.

The panel was analysed with specialist X-ray radiography apparatus in Dundee. The highly-penetrating X-rays confirmed the single wooden section structure of the panel, as well as revealing the history, preparation and adaptation of the support. Filled knotholes in the underlying structure could be seen, which may well have been carried out during preparation of the support. The repair of the large old split was clearly visible, and apparently of some considerable age, given the numerous layers lying above it at the front, though it was not clear if this was part of initial preparation of the panel or later restoration work. Some of the extent of the internal woodworm channeling could also be seen in areas, and reworking using lead white could be seen in places, particularly at the top left quadrant.

Near Infrared Reflectography, carried out by local specialist photographer Bruce Pert, revealed a clear, extensive underdrawing beneath the paint layer. The underdrawing showed that the artist had changed his mind about the composition and drawing of the image, including the positioning of arms, legs and hands, the arrangement of folds in clothing, and the placement of an obvious bearded figure in the top left corner, which had subsequently been painted out. This figure, invisible to the naked eye when looking at the painting in normal light, was covered up by the artist himself with the window and landscape background design that is currently visible.

Art historical research and re-assessment of the existing attribution is currently on-going.

The painting will be on display in a specialist exhibition at Kirkcaldy Galleries throughout 2023. The exhibition includes display information and a video highlighting the background, research and treatment of the picture.

A ‘Study Day’ of presentations regarding all the research, technical analysis and treatment associated with the painting is to be presented at Kirkcaldy Galleries on 22 April 2023. 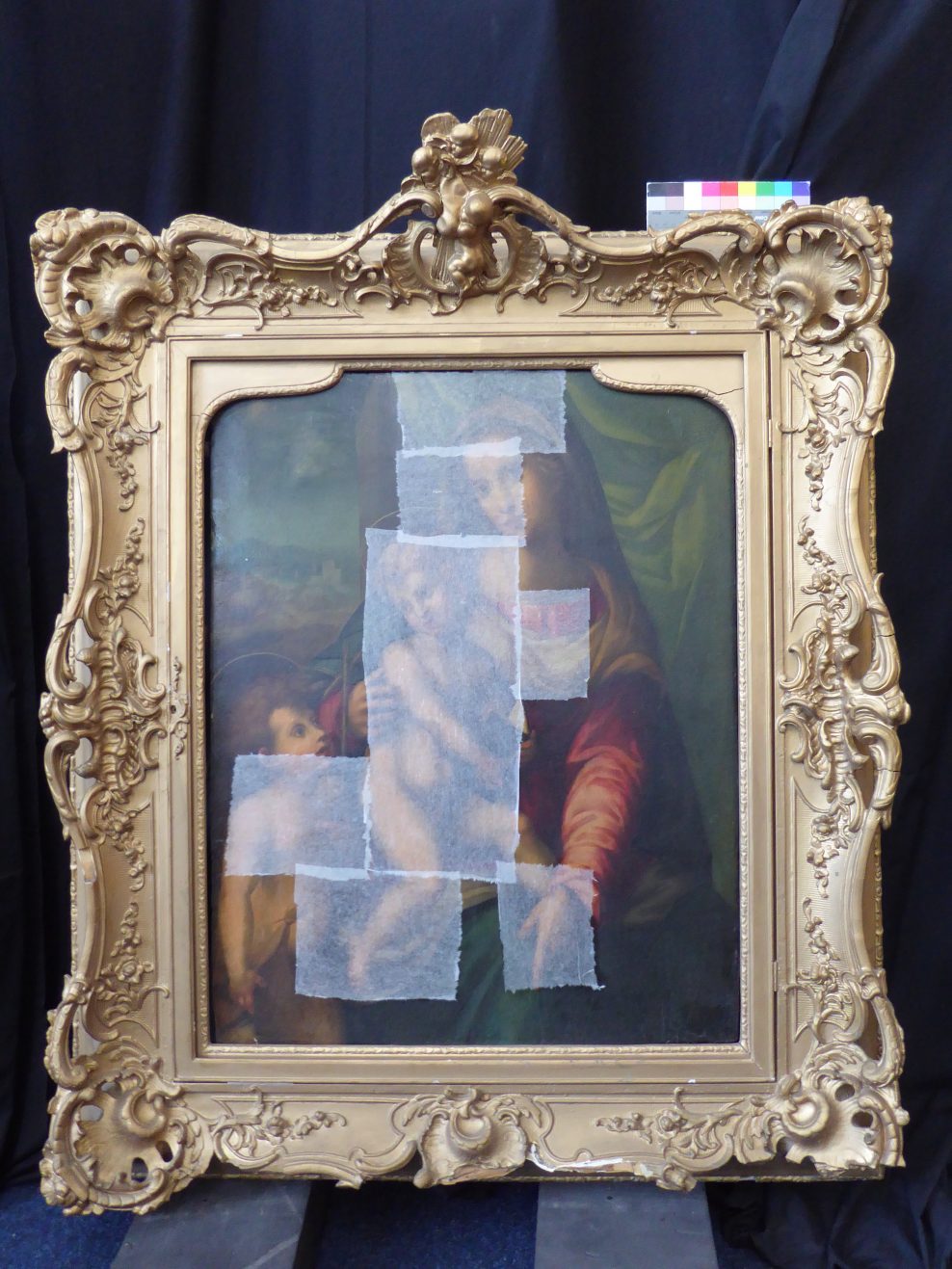 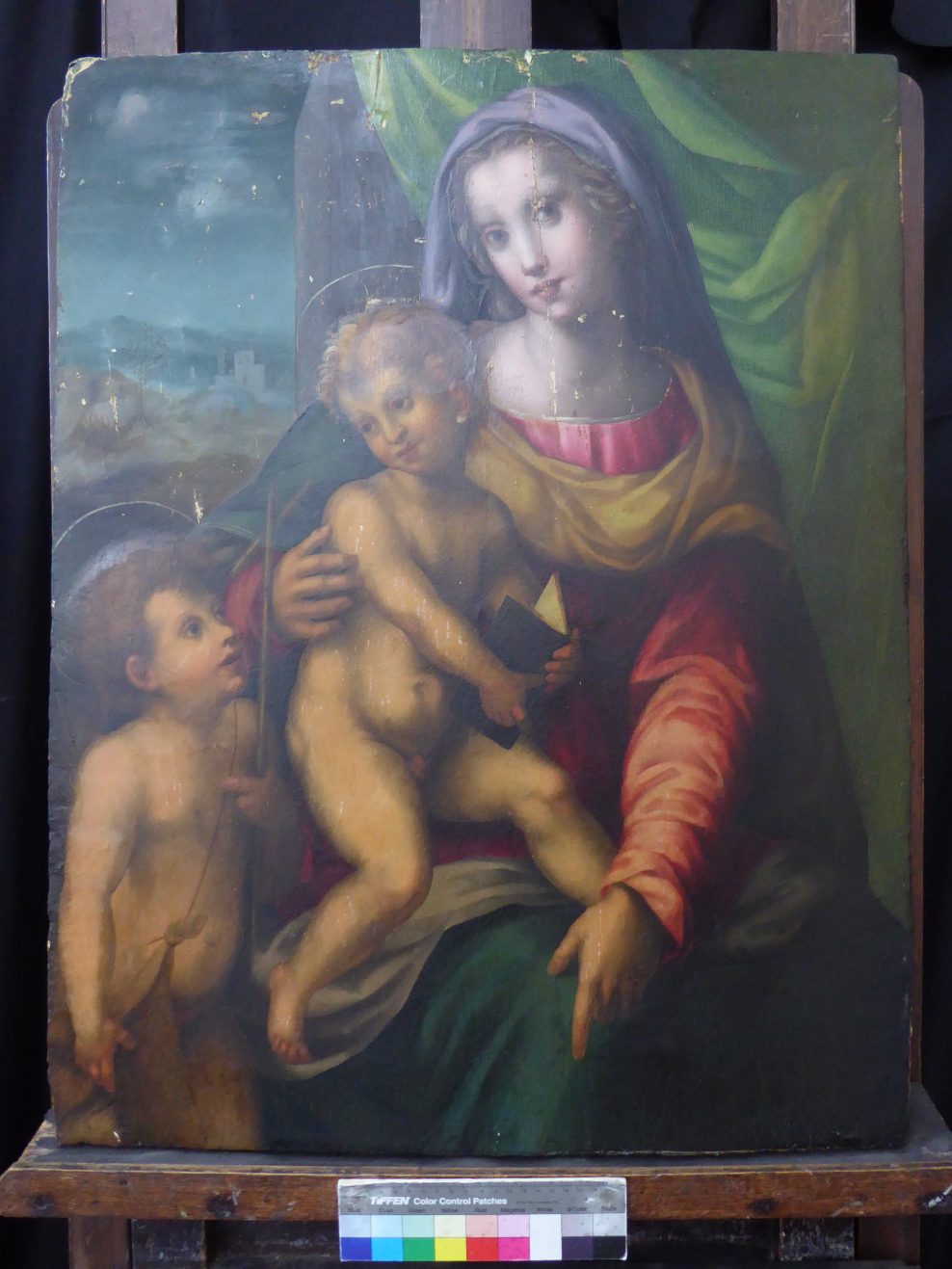 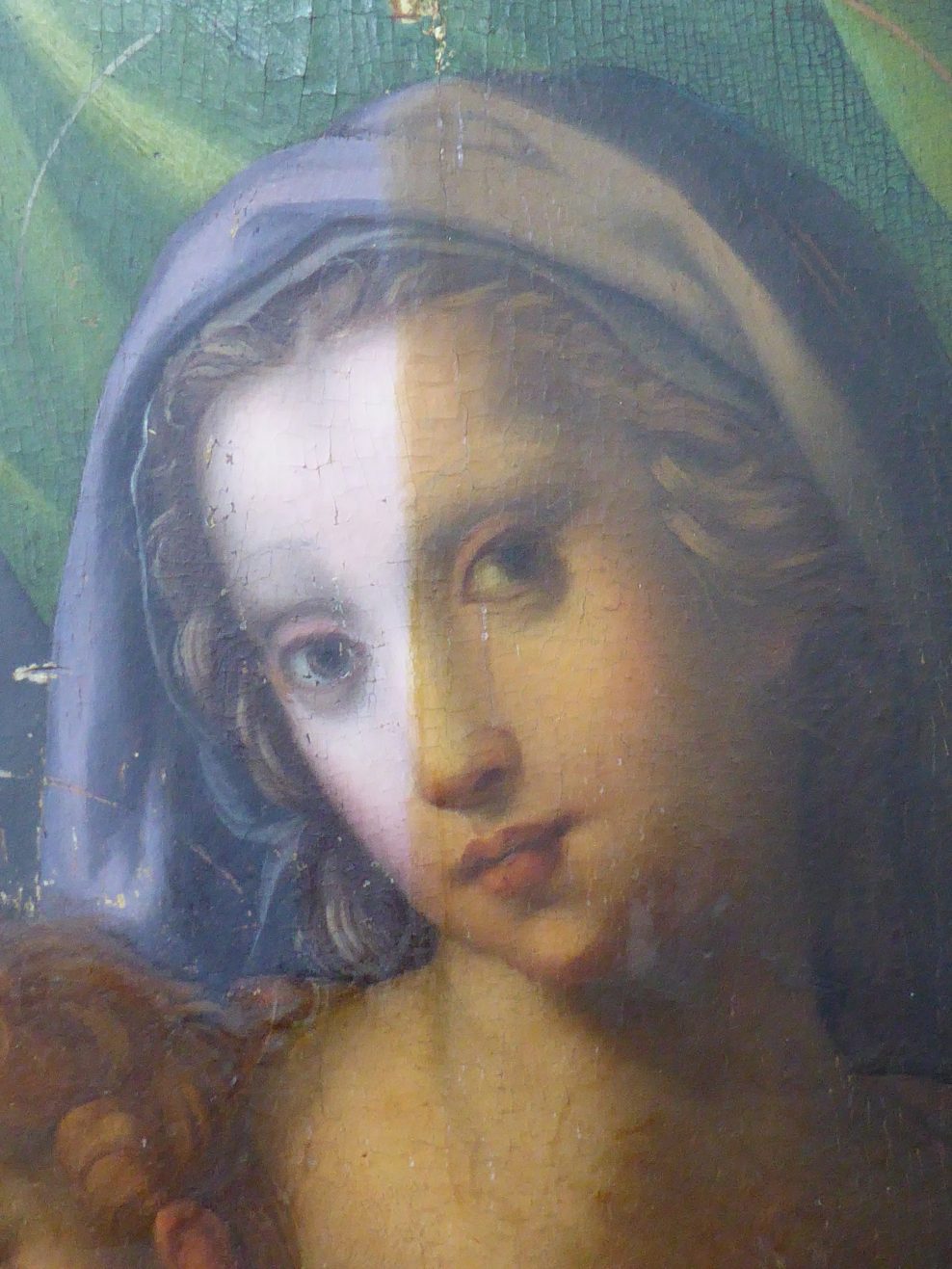 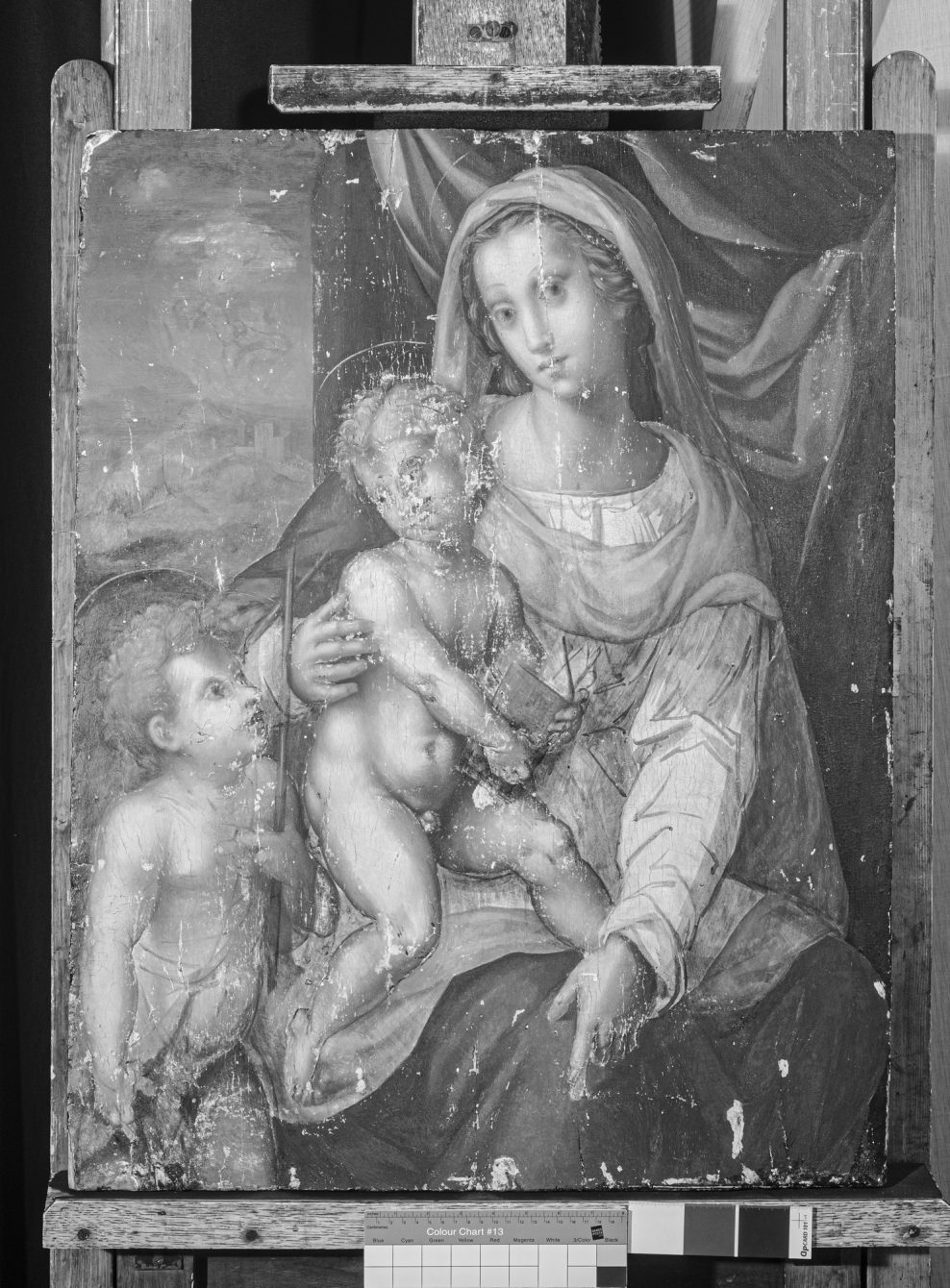 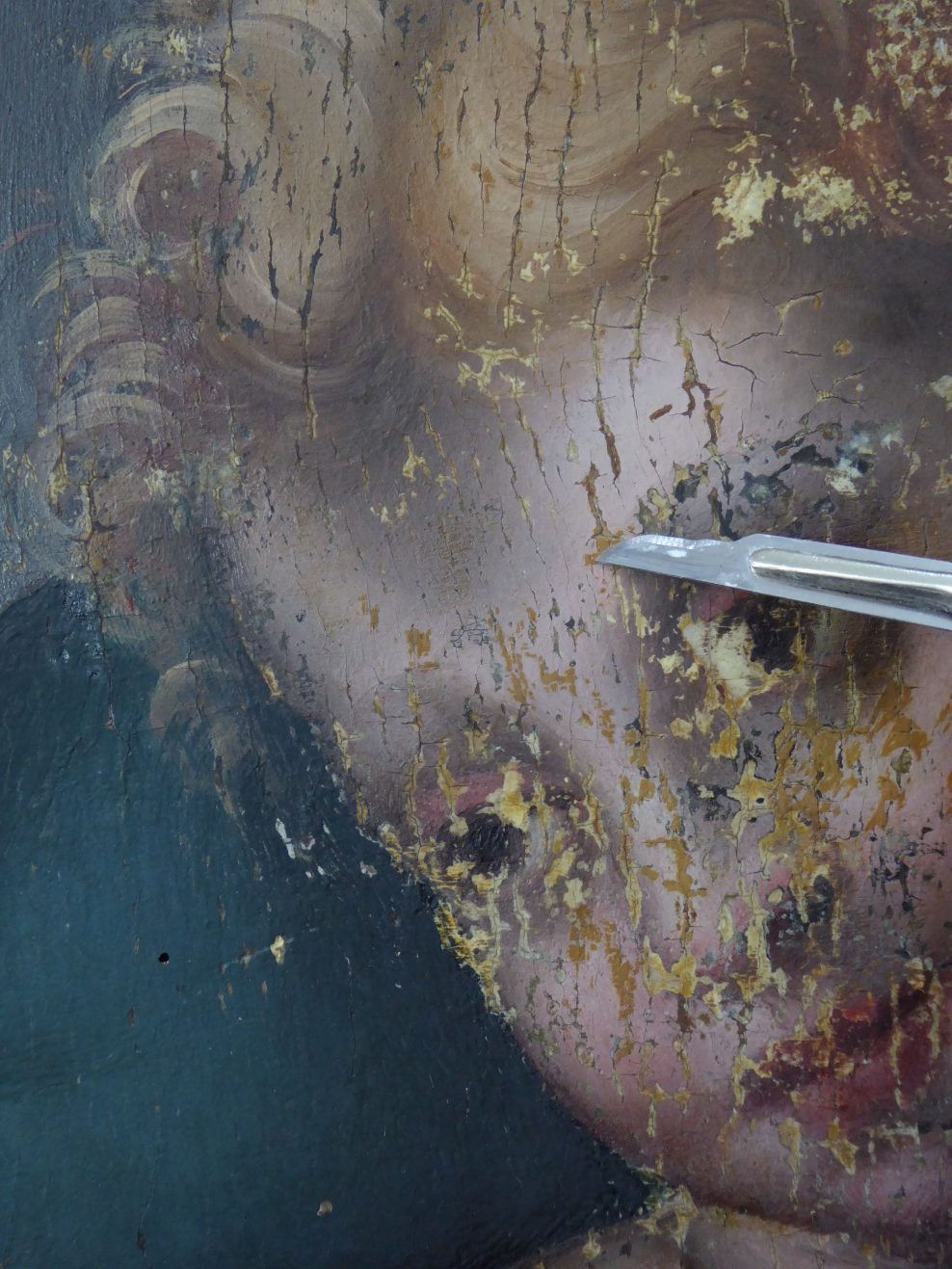 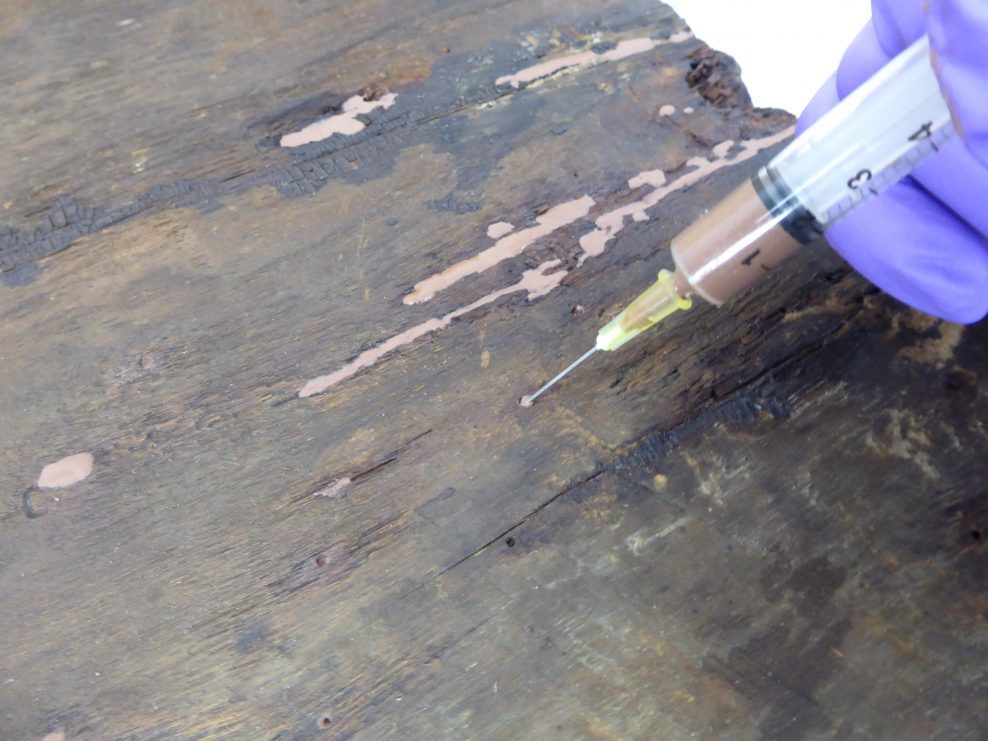 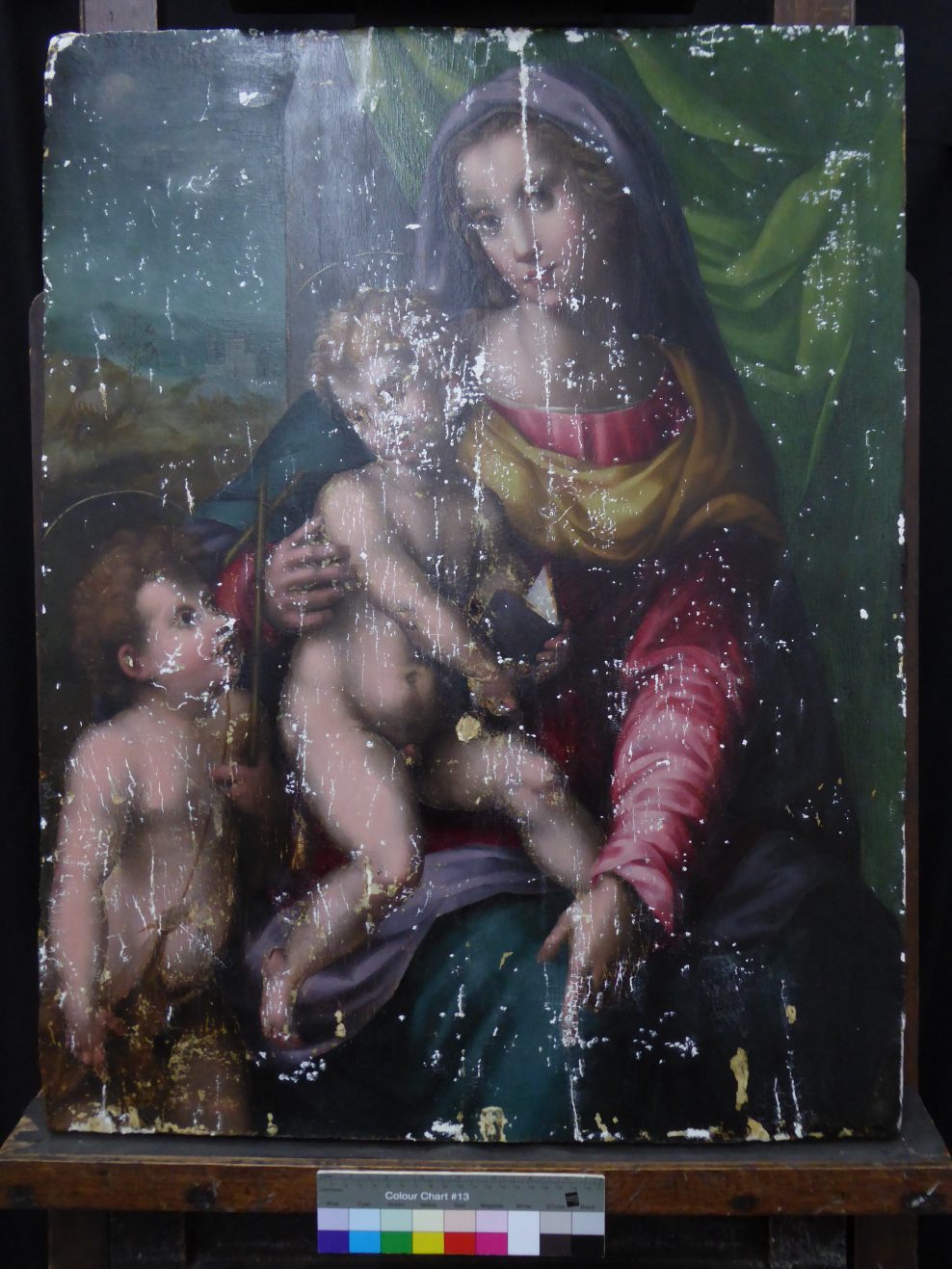 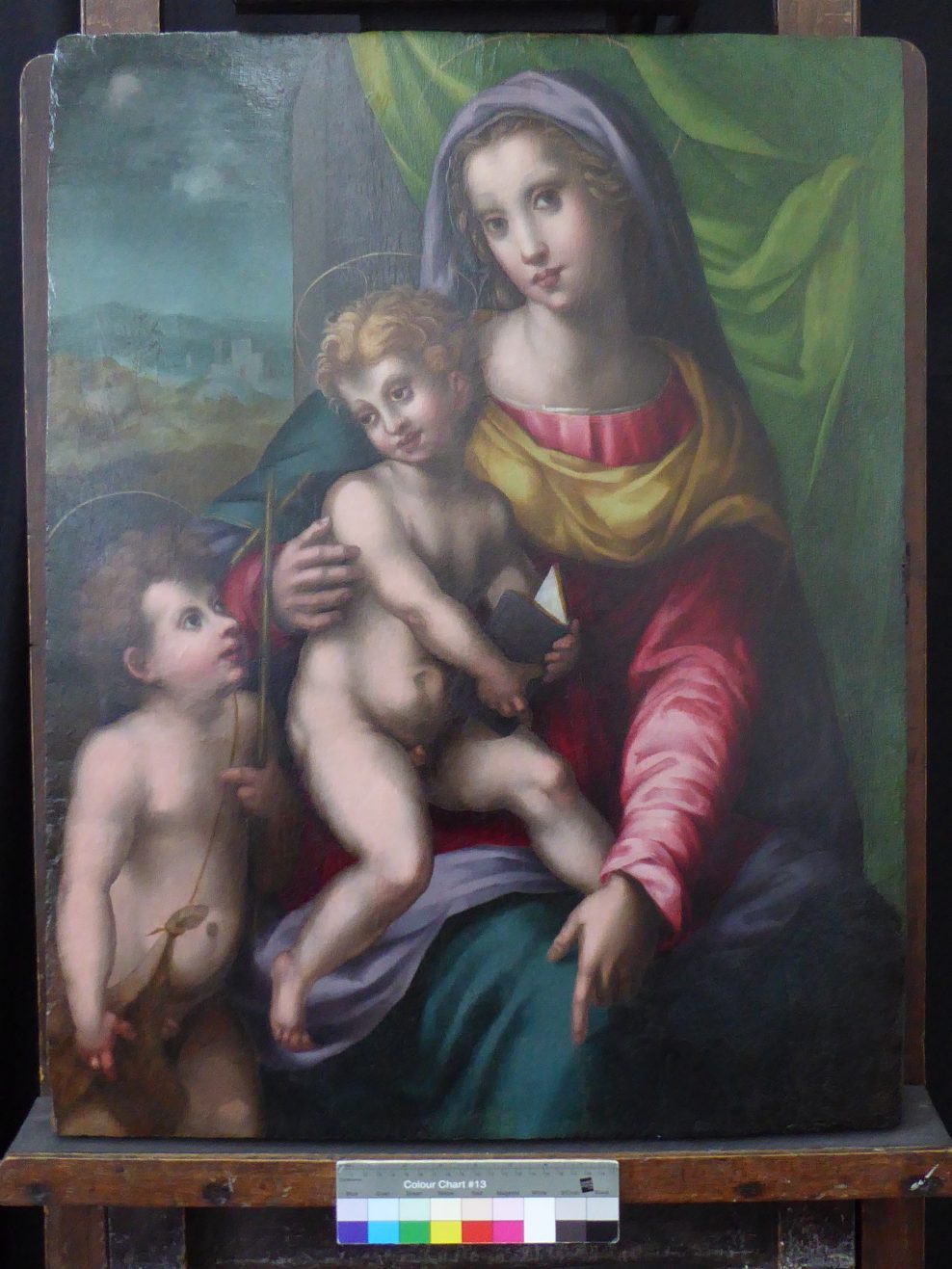 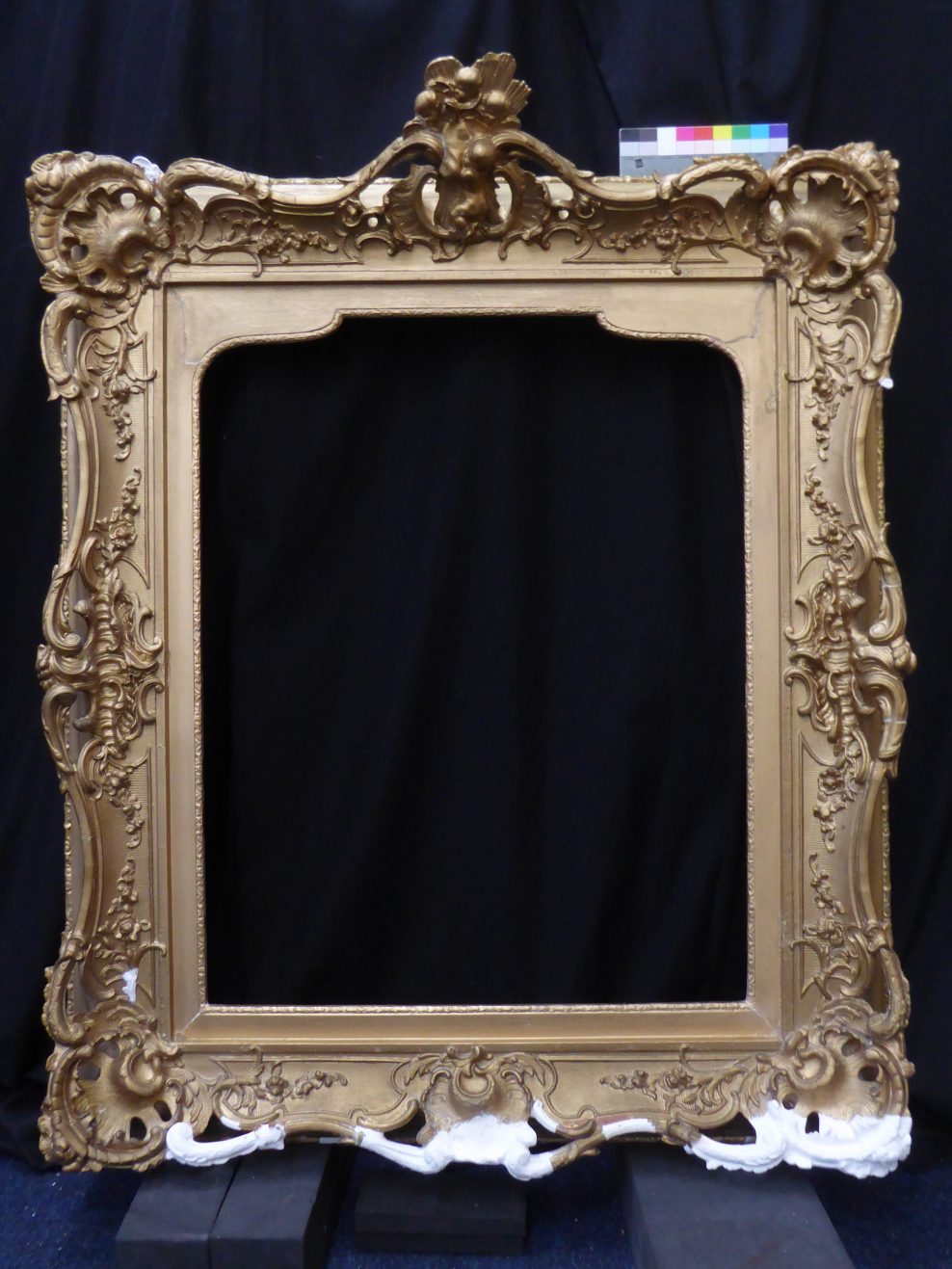