A mid-19th Century ‘Berlin wool work’needlework picture of Queen Victoria seated on a throne was brought in to the studio by a private client. It was unframed and had been on open display, hanging over the fireplace, for many years. The question was could it be cleaned and the condition improved ?

The picture of Queen Victoria was an embroidered canvas work, worked mostly in coloured wools, with highlights in silk in a cross-stitch over a cotton canvas. These kits, known as ‘Berlin wool work’ were hugely popular in the mid 19th Century. Although generally in a good condition and still with bright colouring, the wool embroidery was discoloured with surface and ingrained soiling. There was a loss of some of the silk highlights due to light damage, exposing the bare canvas beneath. There was also evidence of moth damage with some of the wool threads being raised and loose on the surface. The canvas was fixed to a wooden stretcher frame with rusted metal tacks. The outer edges were covered with an ochre coloured wool tape.

The best results for cleaning would be achieved by wet-cleaning (washing) the embroidery, however, the coloured wool threads would first need to be tested to check the stability of the dyes. The original garishly bright colours could be seen on the reverse. Samples of the coloured wools were taken from the thread ends on the reverse and tested in the washing solution. The results were favourable, however, there was still a risk of the dyes running in the bath of washing solution or during the drying process. The risks were discussed with the client who chose to accept the risk and go ahead with wet cleaning. It was important to be fully prepared and set up before beginning the treatment.

The wool tape and needlework were released from the stretcher frame by removing the rusted tacks. They were then surface cleaned, front and reverse, by vacuuming. The needlework and tape were wet-cleaned in a prepared washing solution, by soaking and spongeing on the front and reverse. The samples of wash water showed the amount of soiling that was released. After many rinses, a final rinse was given of deionised water and Acetic Acid to help fix the dyes during drying.

The canvas work was blotted and pinned out to dry. The process was speeded up using a warm air blower (hairdryer) to prevent any dyes running. The needlework was not left until it was fully dry. The results proved it had been a worthwhile treatment, the embroidery looked much cleaner and brighter and felt more flexible and in better condition. It was mounted onto a full support of fine linen scrim to provide a structural support. Any areas of bare canvas, where the silk highlights had been lost, were re embroidered, using stranded cotton, to introduce lost highlights of the design. The loose wool threads that had suffered from moth damage wool were secured through to the support.

The client wished to keep the picture unframed, since this was how she had always known it. The original stretcher frame was re used. The front face of the stretcher was covered with acid-free board to provide a solid support for the canvas work and covered with a soft cotton fabric. The canvas work was then stitched onto the covered stretcher. The reverse was finished with natural linen and the edges were covered with the wool tape. New hanging fixings were attached to the back.

The treatment was a success. Although there had been a concern about the risk of wet cleaning, which had to be considered, the risk was managed and carried out under control. The overall appearance and condition had been greatly improved. The full support provided a structural support and the mounting technique provided a safe method of display. I’m pleased to say the client was impressed with the results and was delighted with a rejuvenated Queen Victoria. 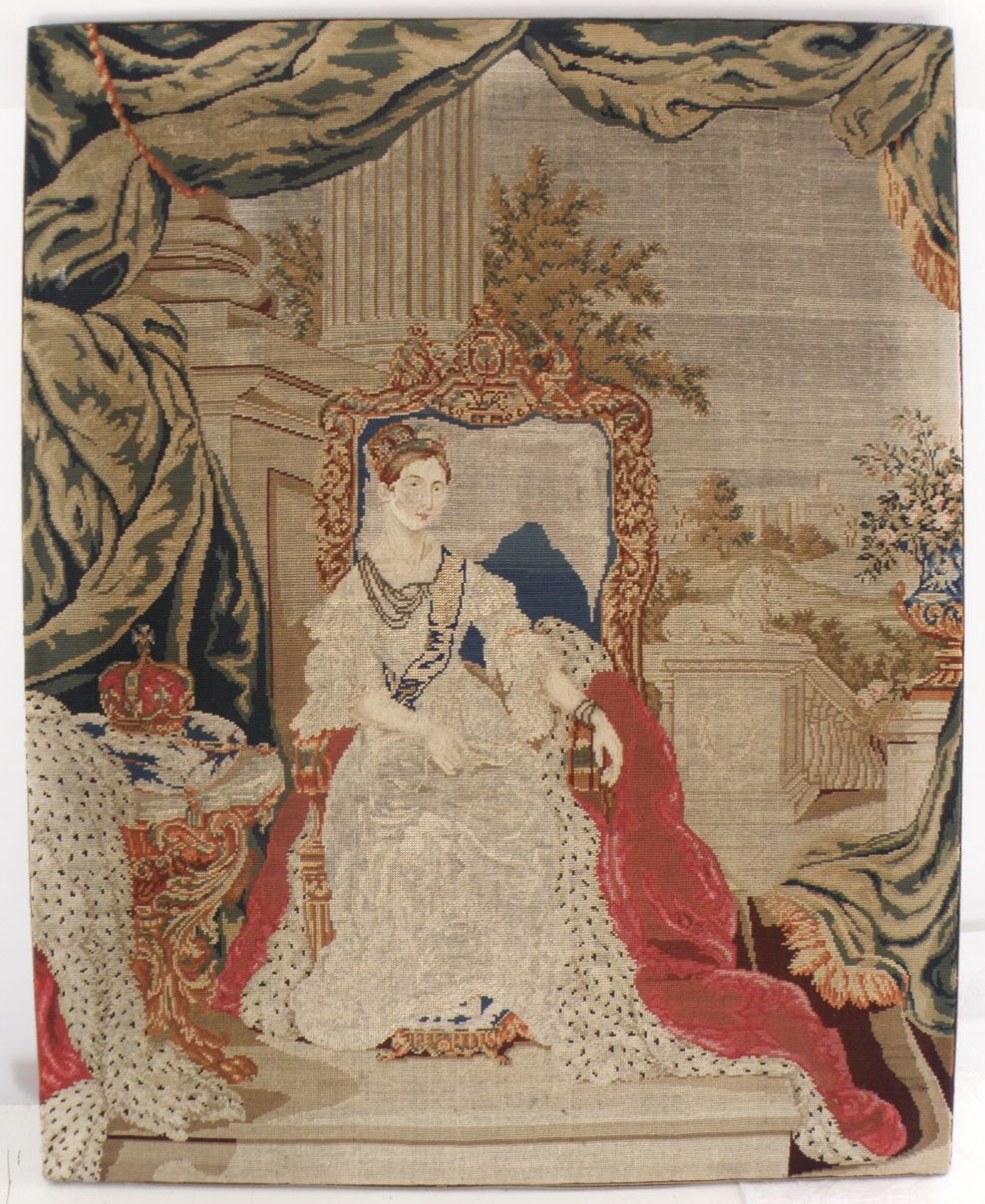 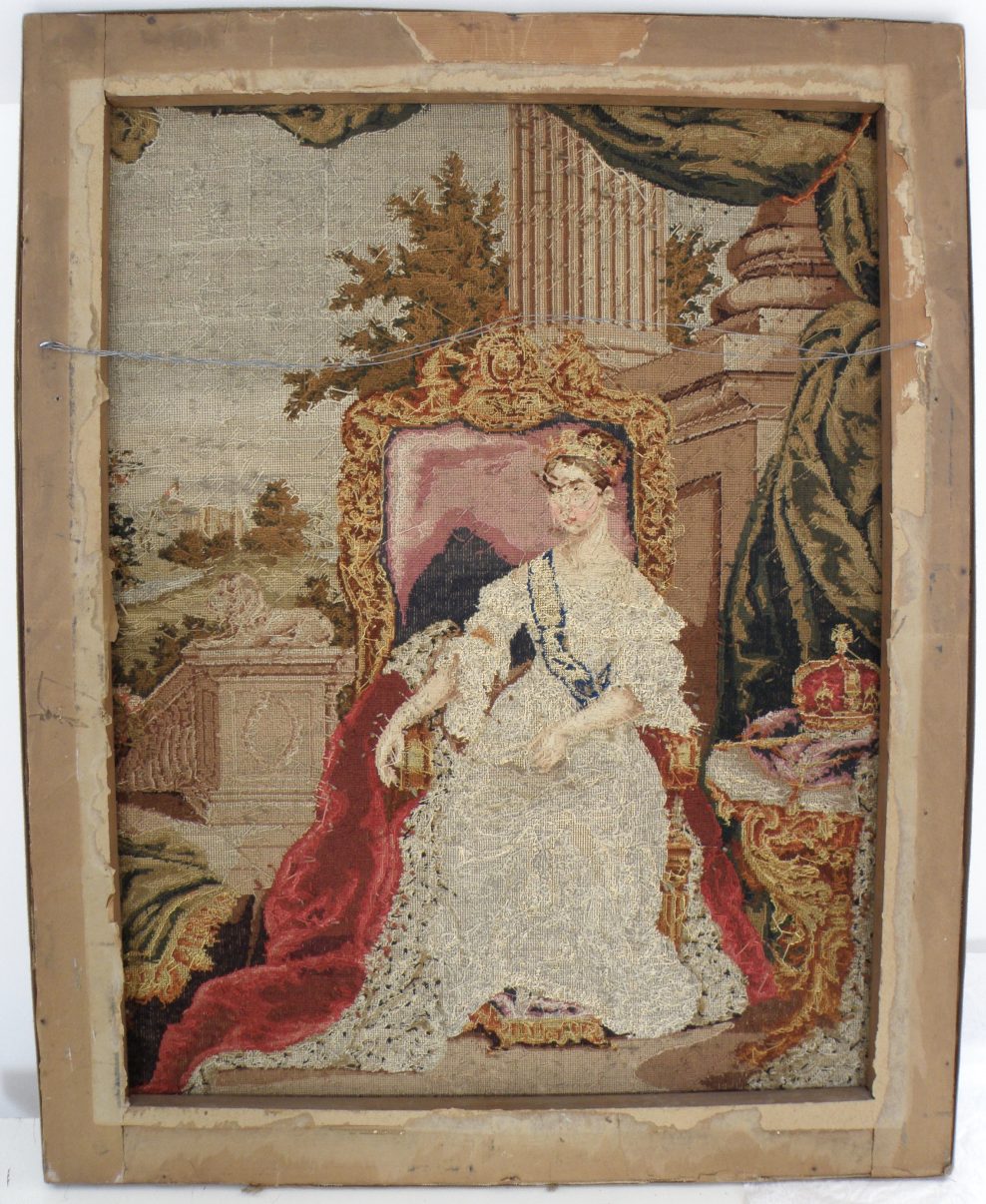 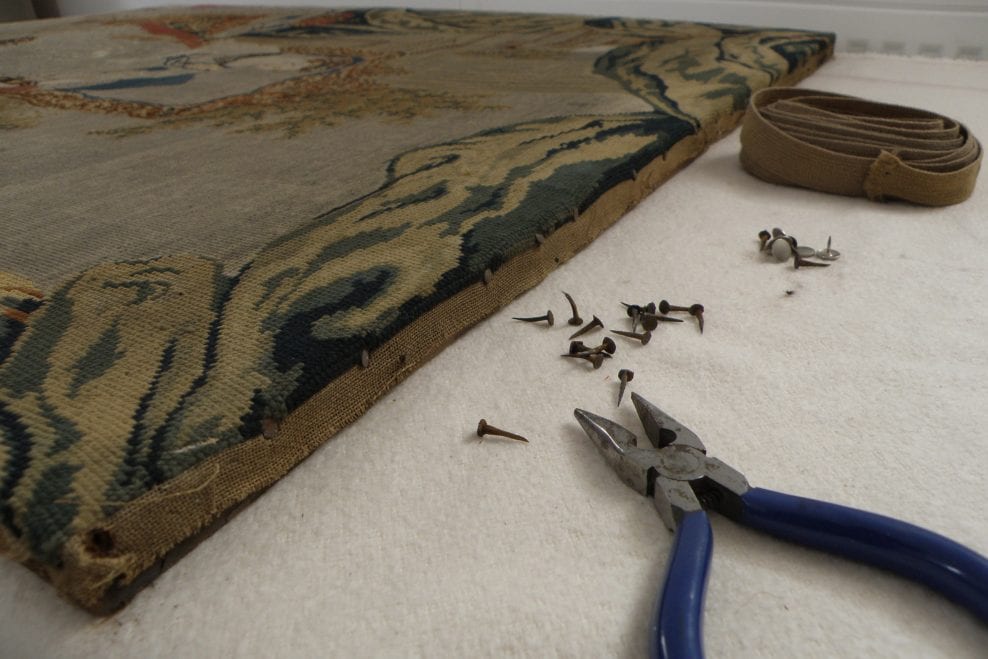 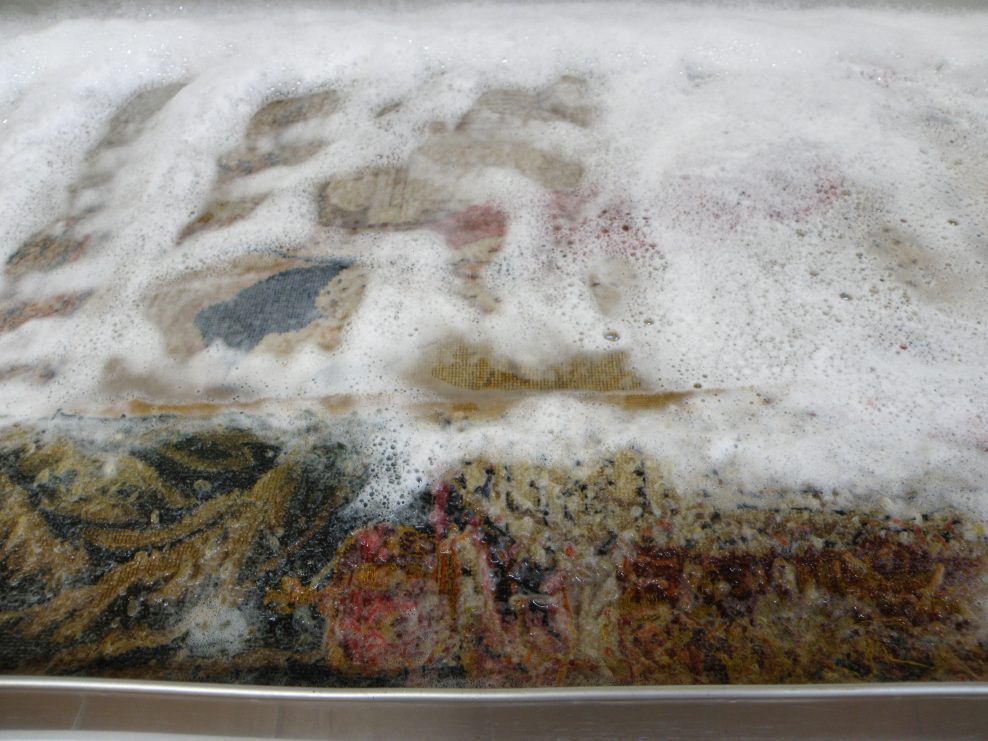 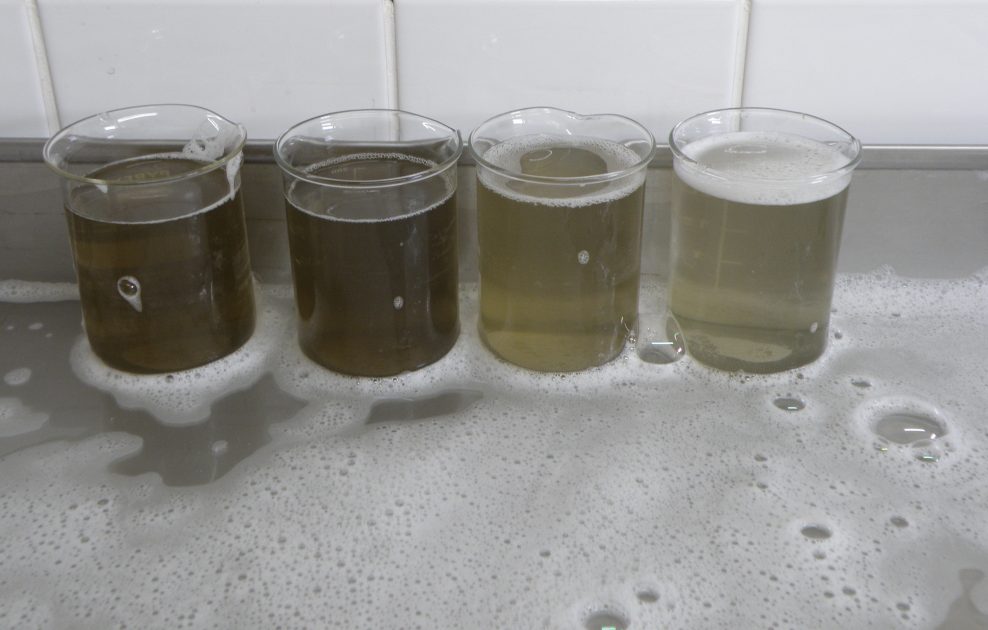 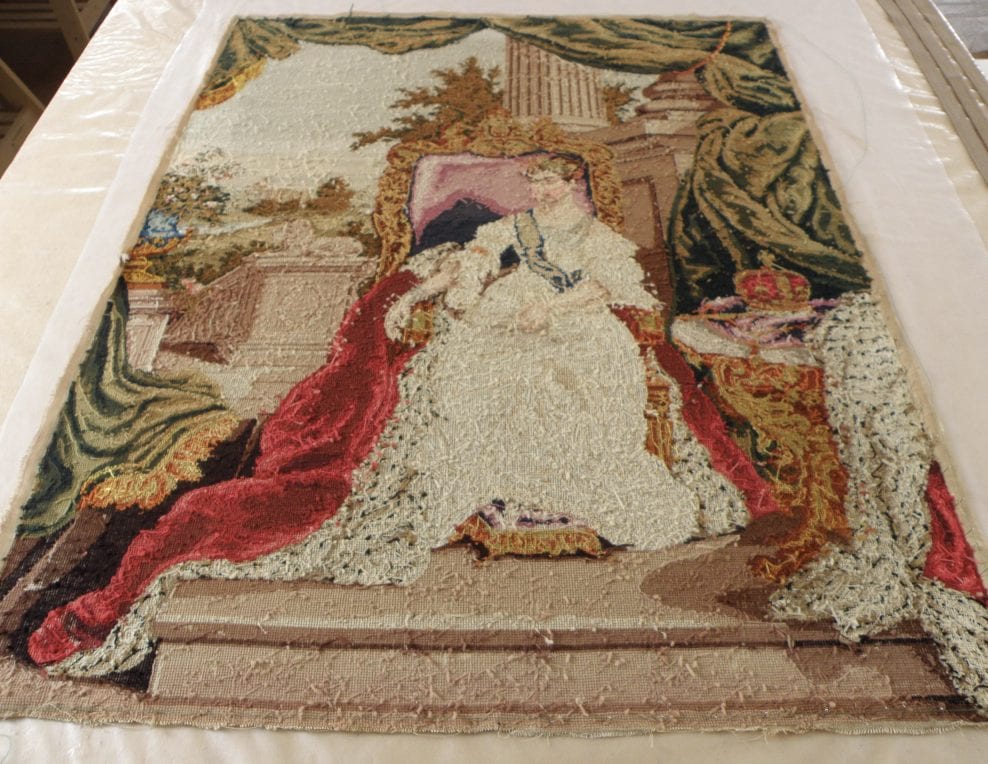 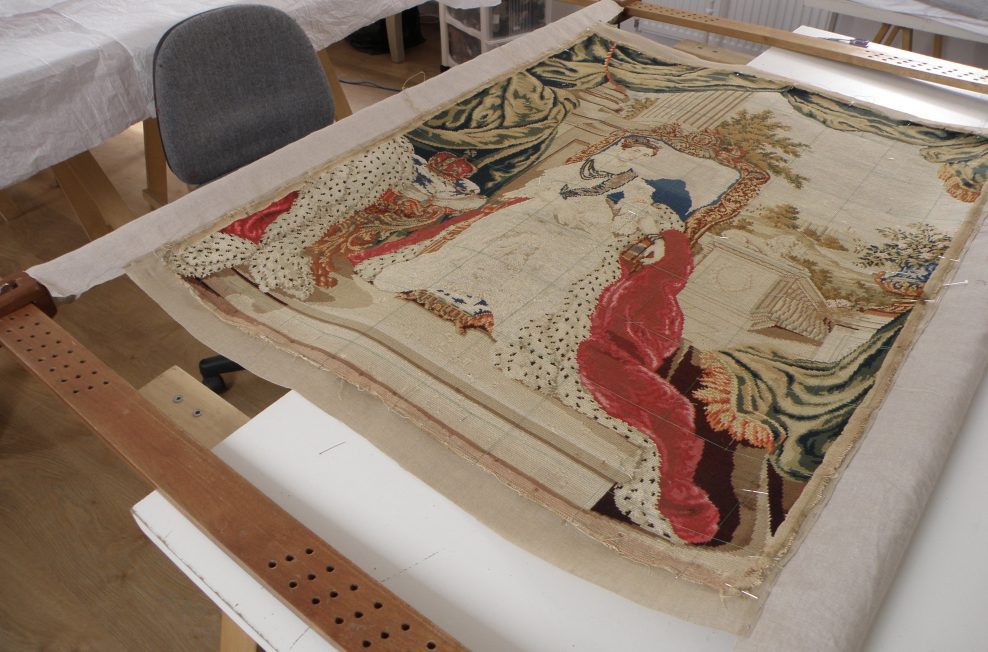 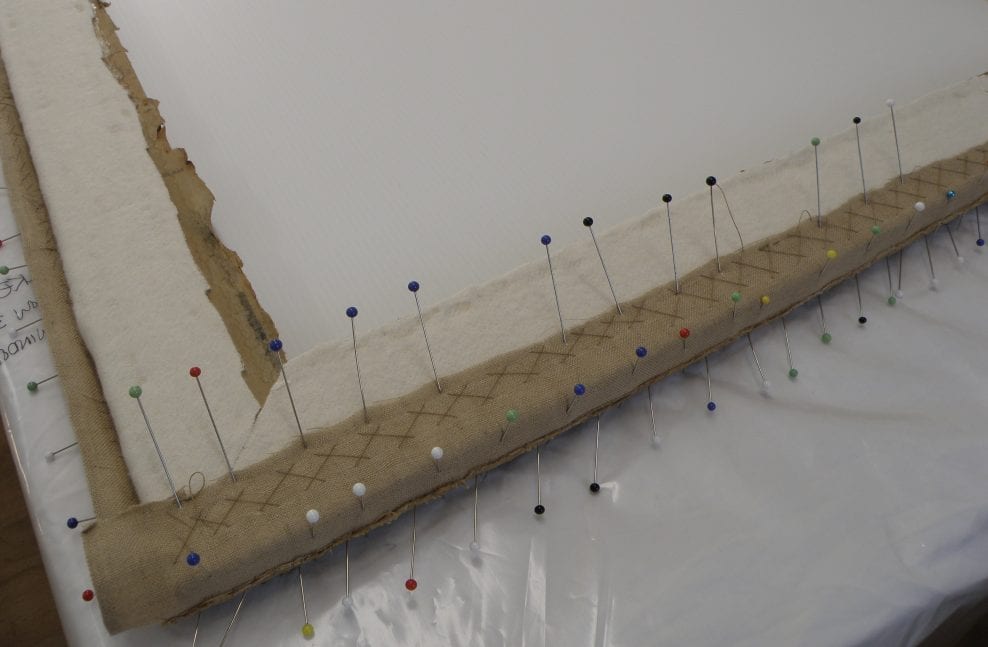 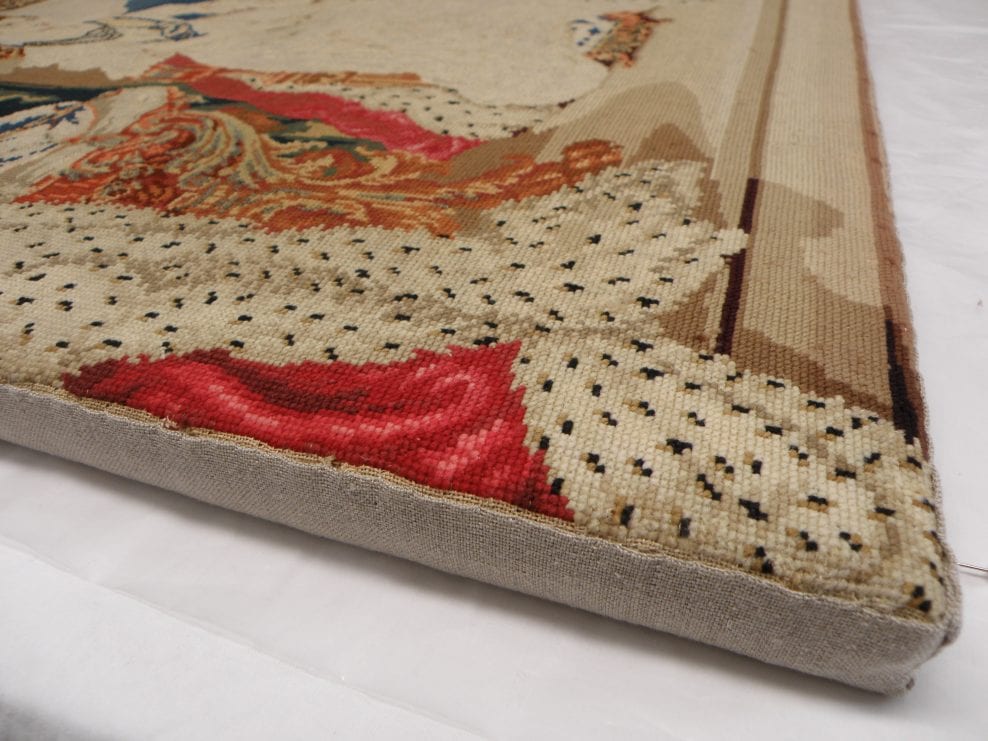 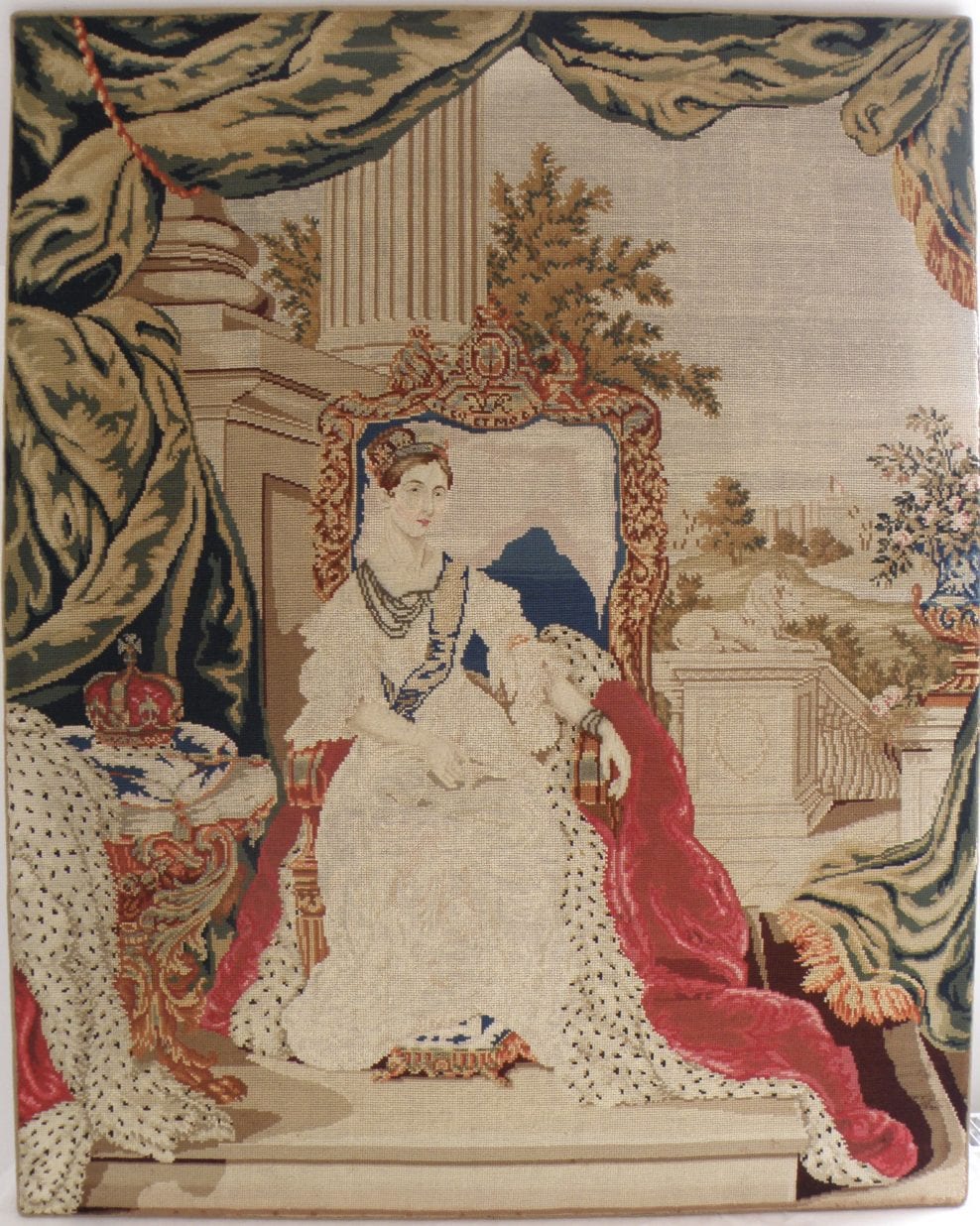