A soldier rag doll, found behind a cupboard in the old vicarage, Claverly, Shropshire. The doll wears the uniform of a British soldier from the era of the Peninsula Wars, 1807-1814. It was donated to Shropshire Museums Service by Claverly Memories Local History Society with a view to its being conserved, and displayed in Shrewsbury Museum.

The doll measures approximately 300 mm tall by 200 mm wide, fingertip to fingertip.  It is made from undyed plain weave linen fabric and wears a coatee made from scarlet fulled wool fabric, embroidered with yellow wool threads in imitation of frogging.  The embroidery passes through the coatee and into the fabric of the doll itself. The neck is wrapped in a length of black fabric in imitation of a stock. The trousers are made from plain ribbed weave white linen fabric, with a very faint pale blue stripe. The shoes are made from black wool fabric, with an insert of cream-coloured card to stiffen the sole area. The sash, which passes twice round the waist before being tied in a knot, is made from yellow twill weave silk fabric. The facial features of the doll are faint and appear to have been drawn or printed onto the fabric;  hair and sideburns are indicated with dark brown wool embroidery. It is unclear what the doll is stuffed with. The doll and the clothes appear to be hand sewn throughout, with the exception of the hems of the trouser legs, which are machine stitched.

The doll was heavily soiled with fine particulate dust, especially on the back of the coatee.  There was widespread evidence of insect attack to the hair, the coatee and the shoes. The sash was heavily creased and soiled.

The brief was to clean and conserve the doll for museum storage and occasional display.

The doll was surface cleaned with low powered vacuum suction, which removed a good deal of loose, particulate soiling, including insect detritus.

The trousers and sash were removed from the doll. It was discovered that the shoes were, in fact, the lower portions of knee boots made from wool fabric and sewn to the doll’s legs; the undyed linen fabric of the doll’s legs presumably is meant to represent white breeches. The trousers, which have machine-made hems at the ankles, may well have been made some time after the doll and its coatee and boots: the use of sewing machines in the UK was not widespread before the third quarter of the 19th century. The sash may be contemporary with the doll or with the trousers.

The trousers and sash were wet cleaned with non-ionic surfactant in softened water; they were rinsed in deionised water. The trousers were dried stuffed with crumpled nylon net to smooth out any creases in the fabric.  The sash was dried on a polythene-covered board, with net pinned out over the sash to keep the fabric smooth as it dried.

The boots were patched with shaped pieces cut from mercerized satin weave cotton fabric dyed to tone with the original wool fabric of the boots. The shaped pieces were held in place with perpendicular stab stitches worked in dyed fine silk thread.

The doll’s clothes appear more complete than before when viewed from a distance.

The trousers and sash were not replaced on the doll. They are easily put back on as and when required. 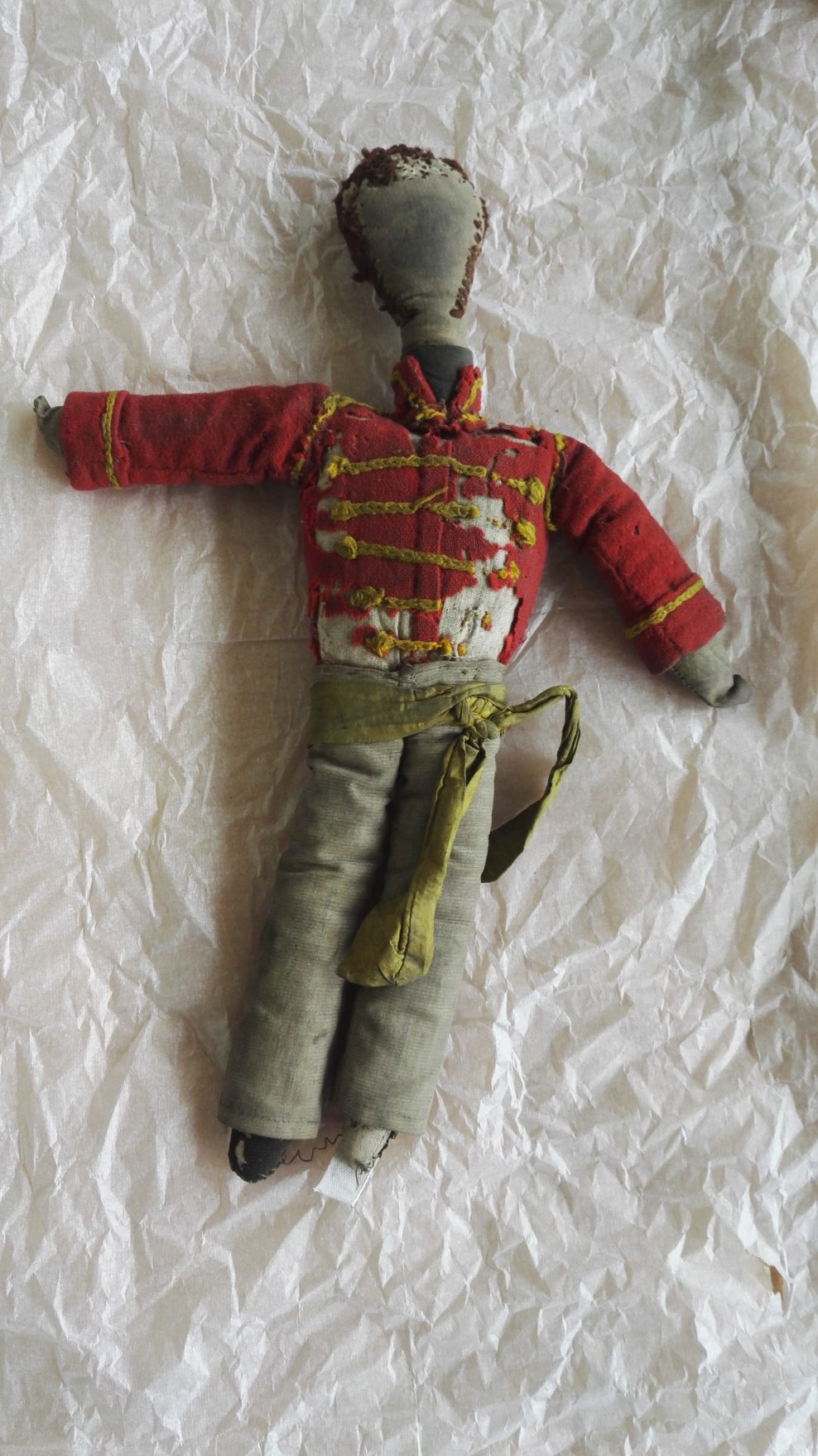 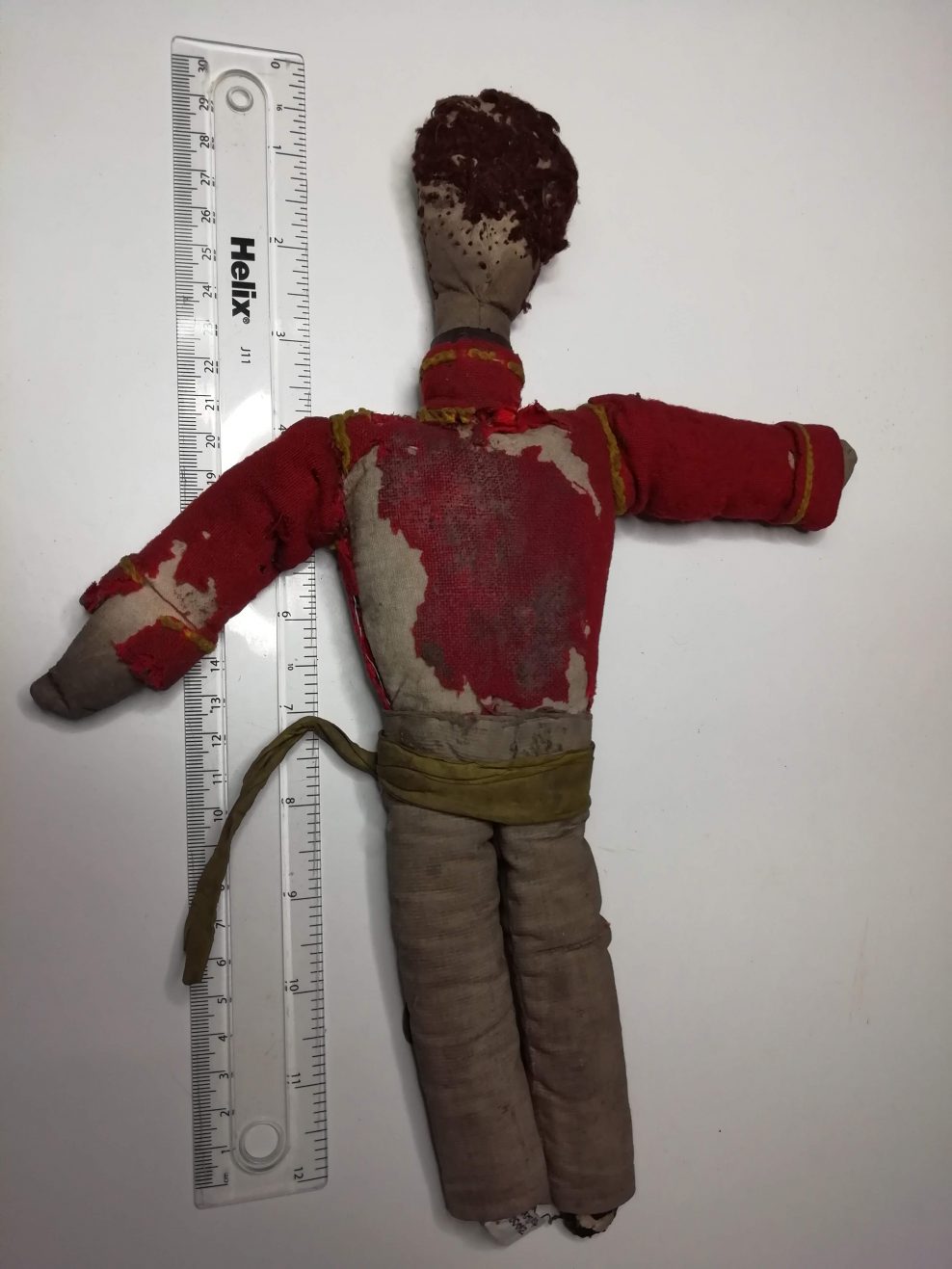 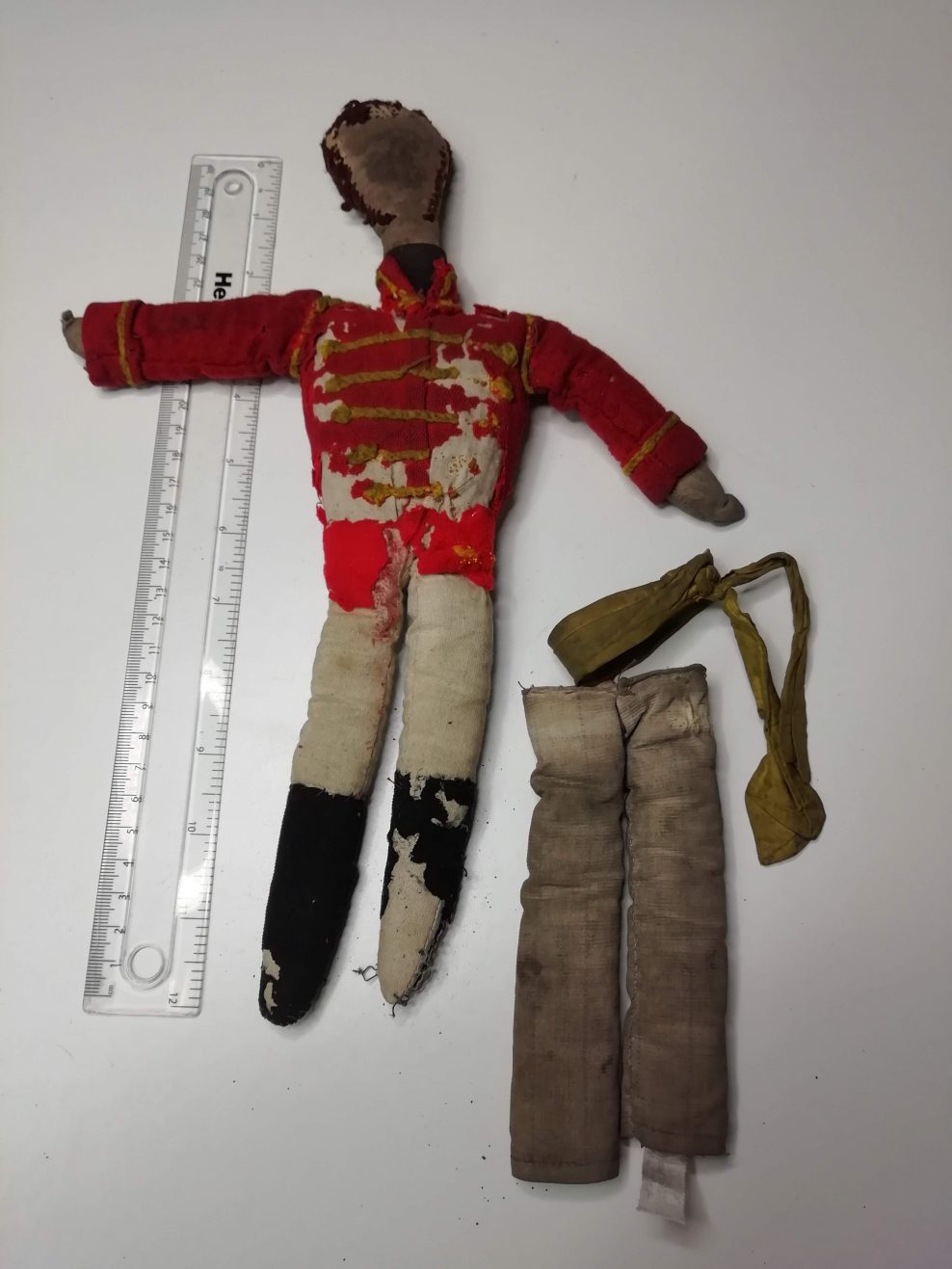 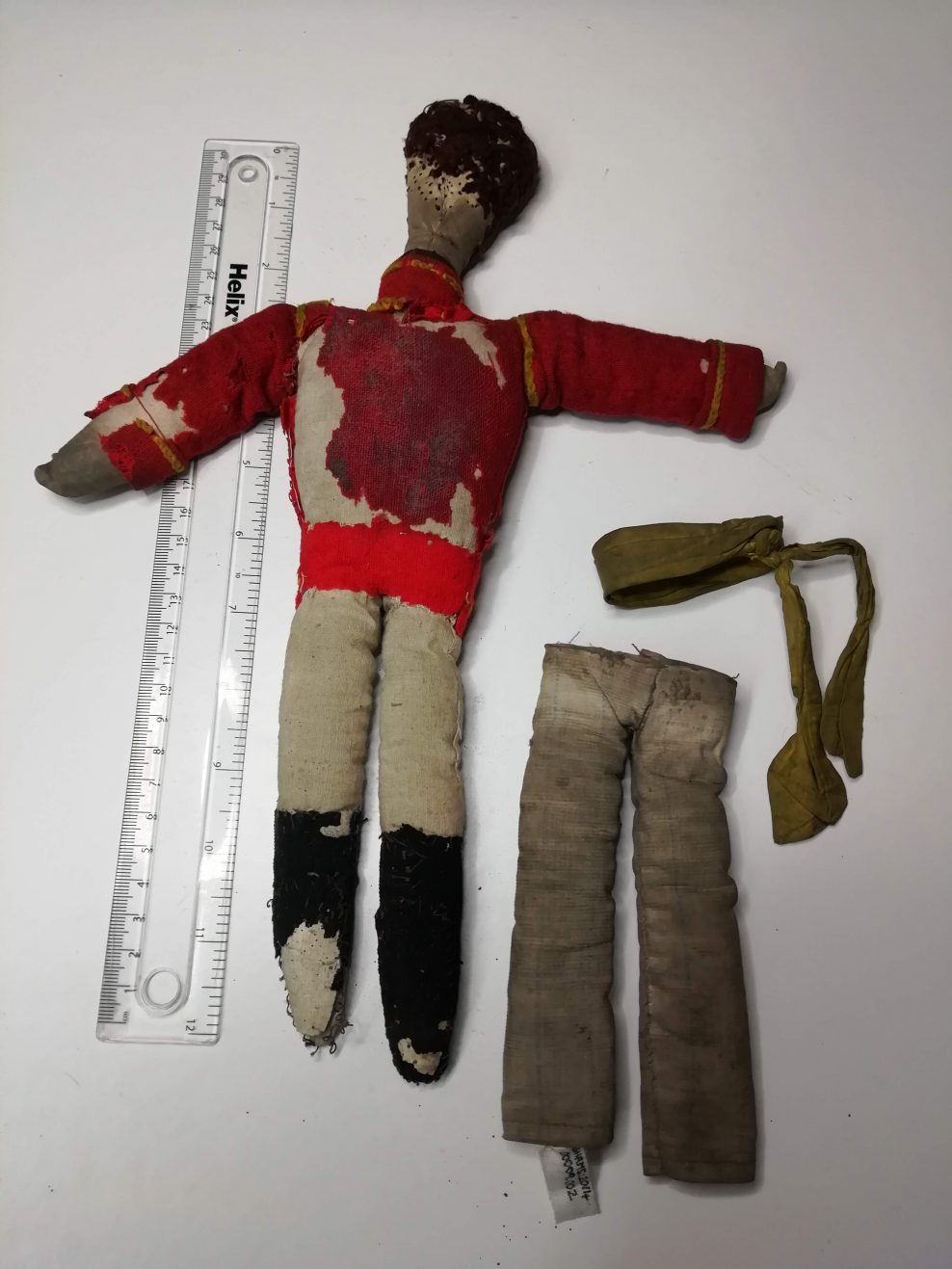 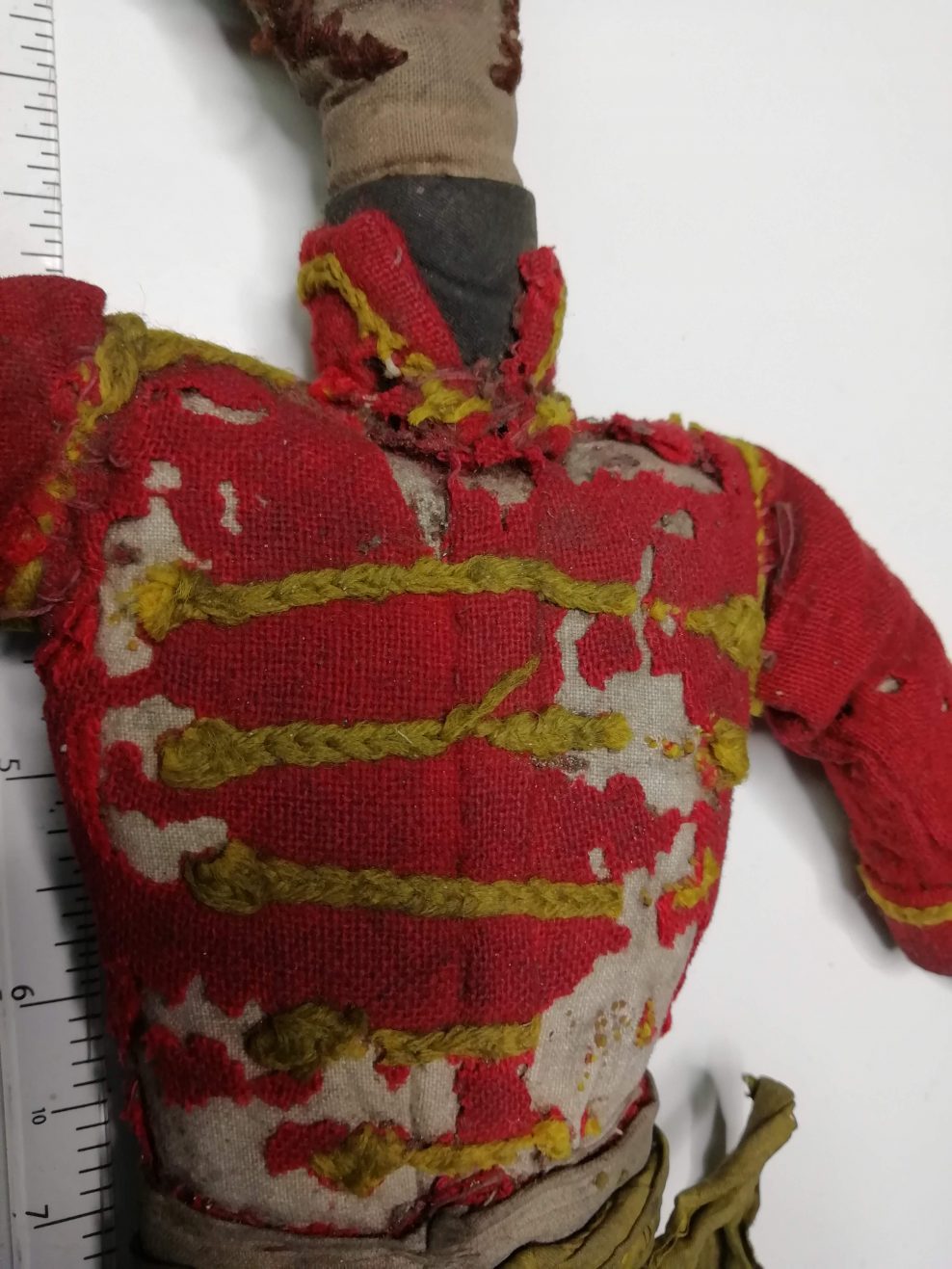 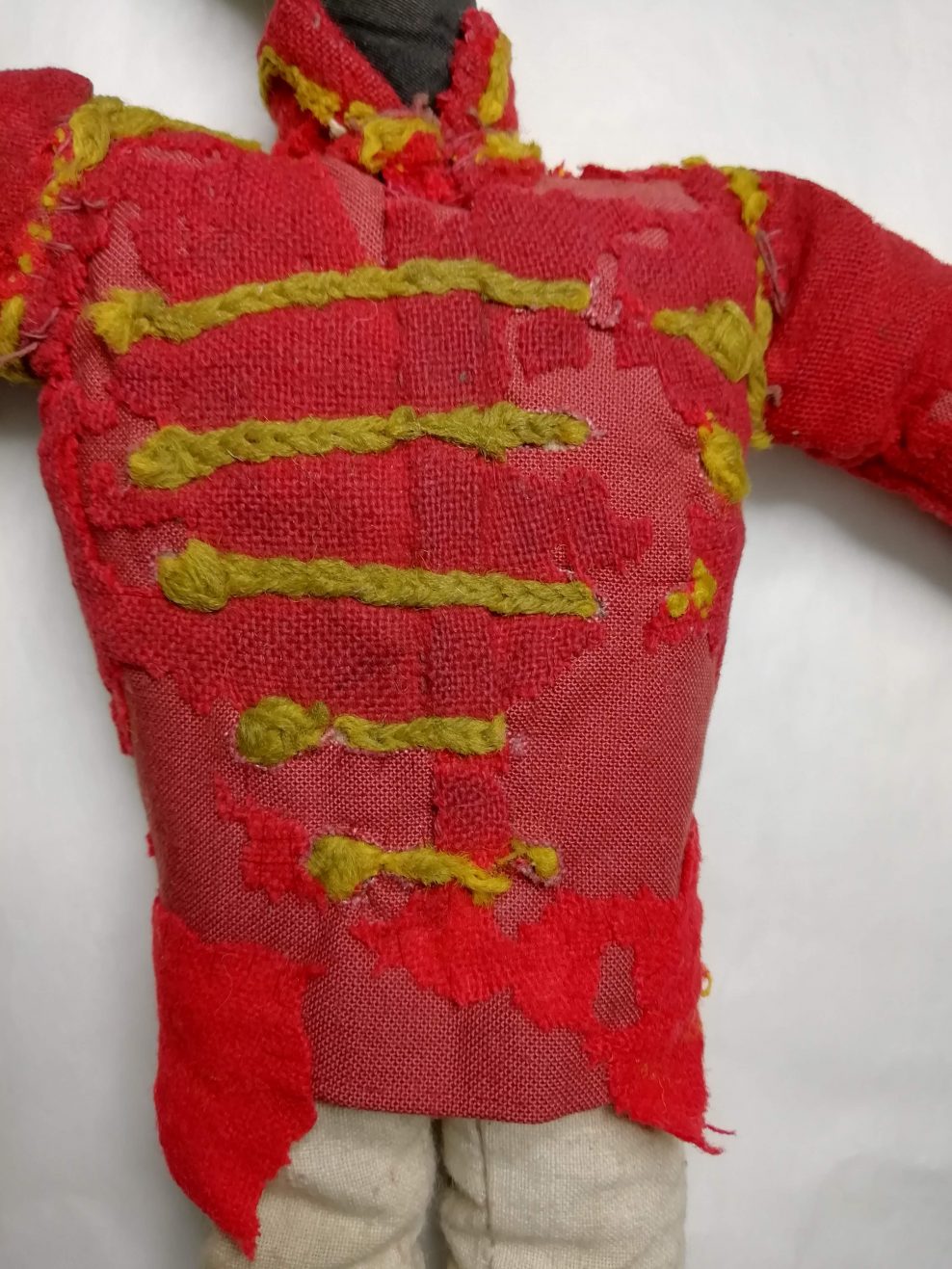 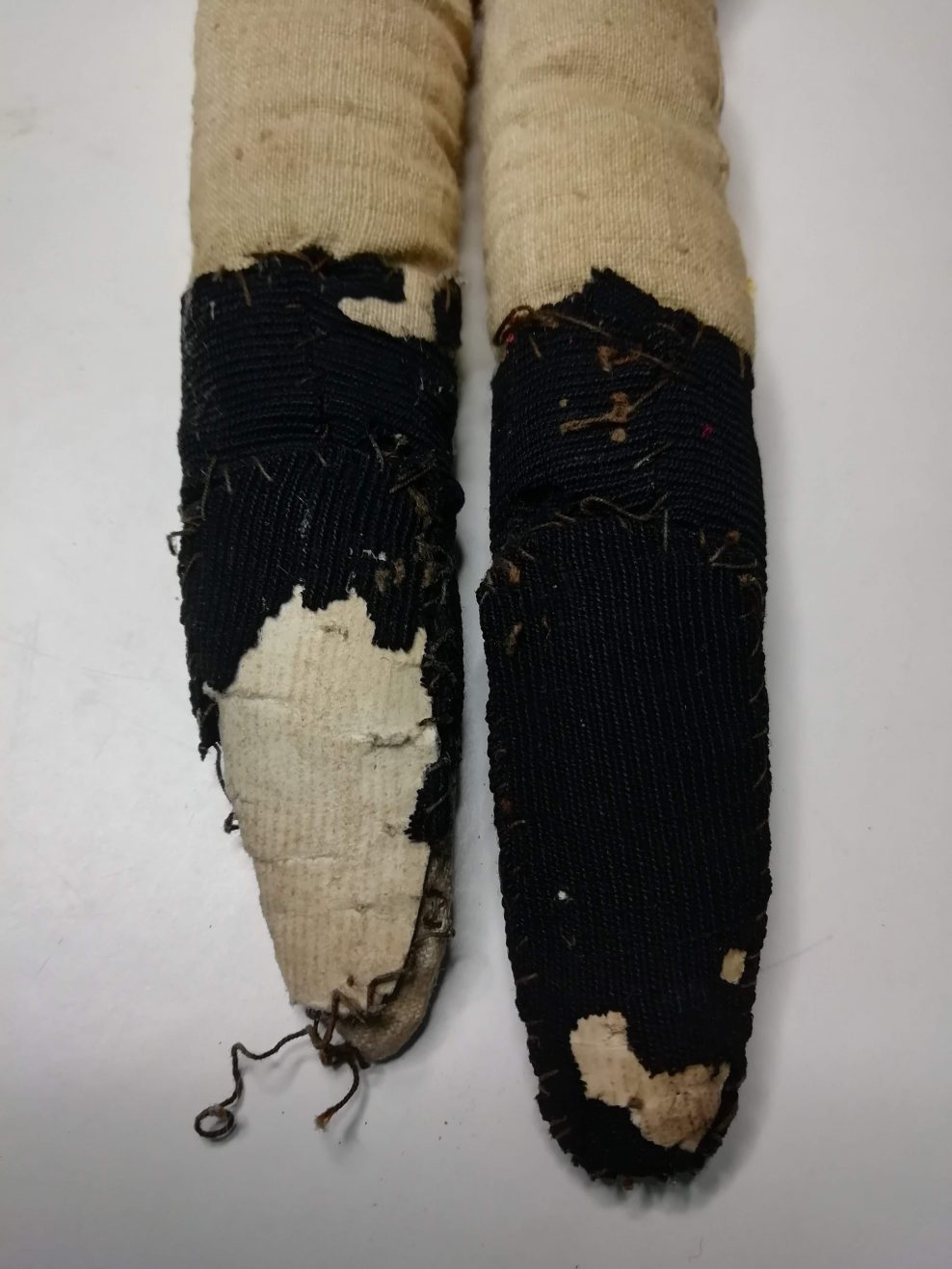 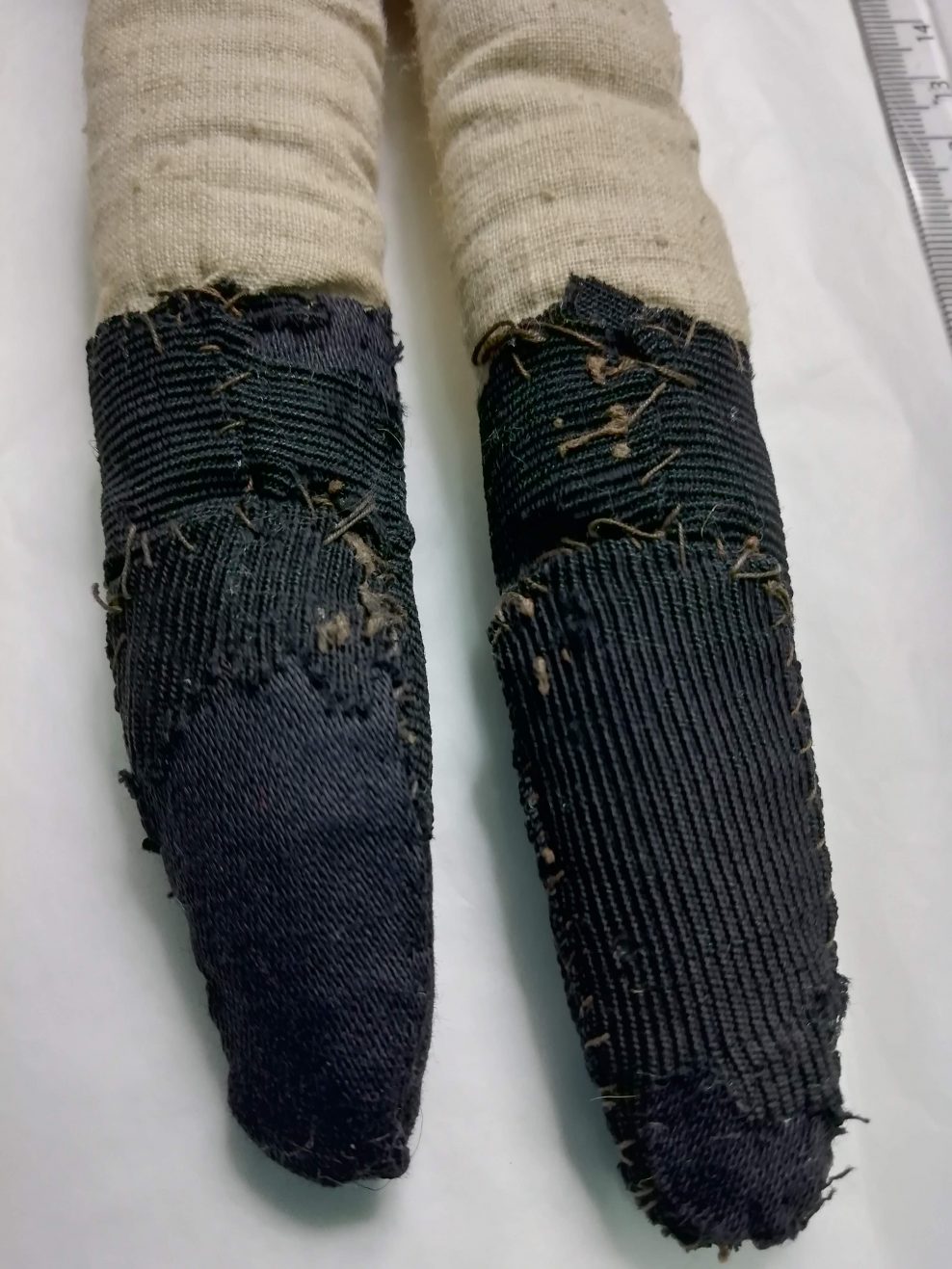 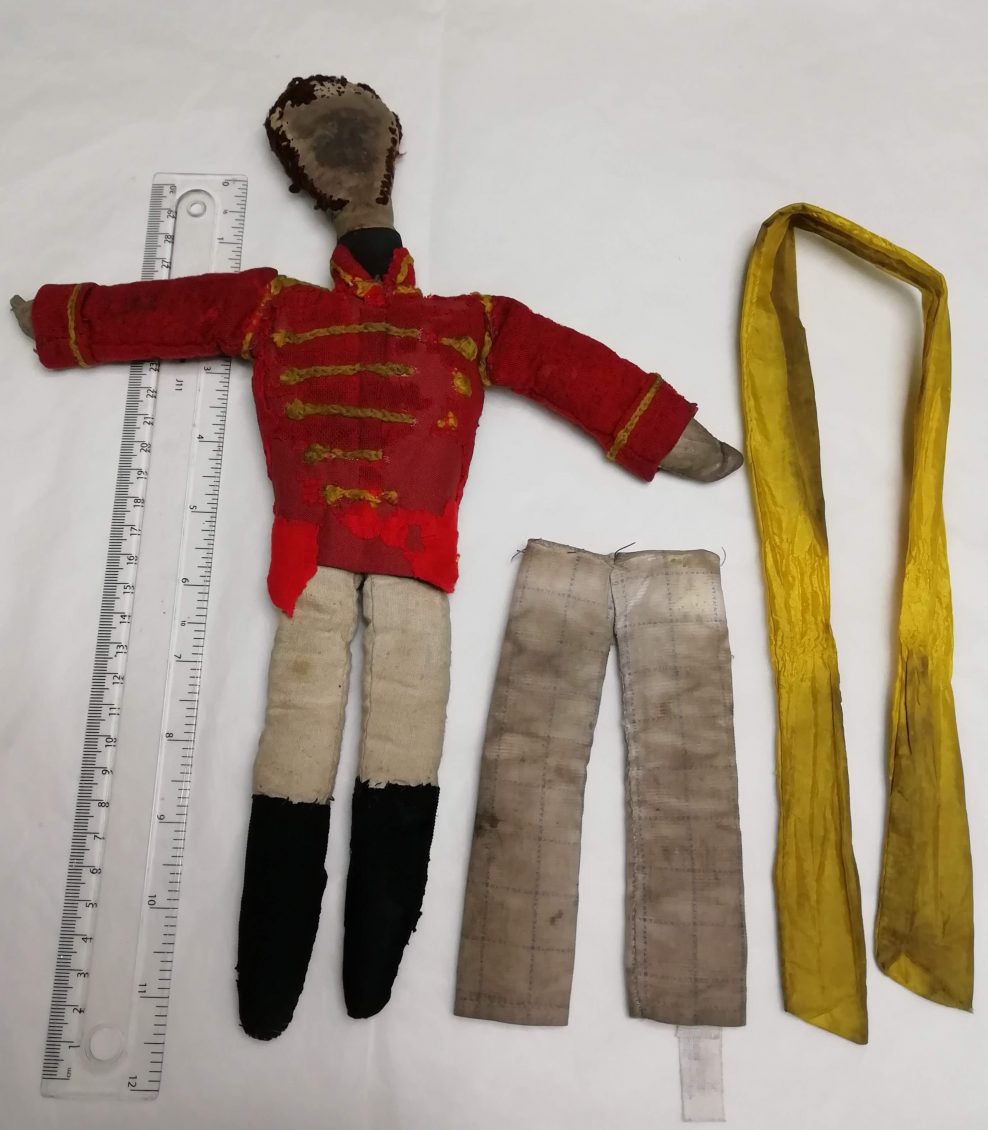 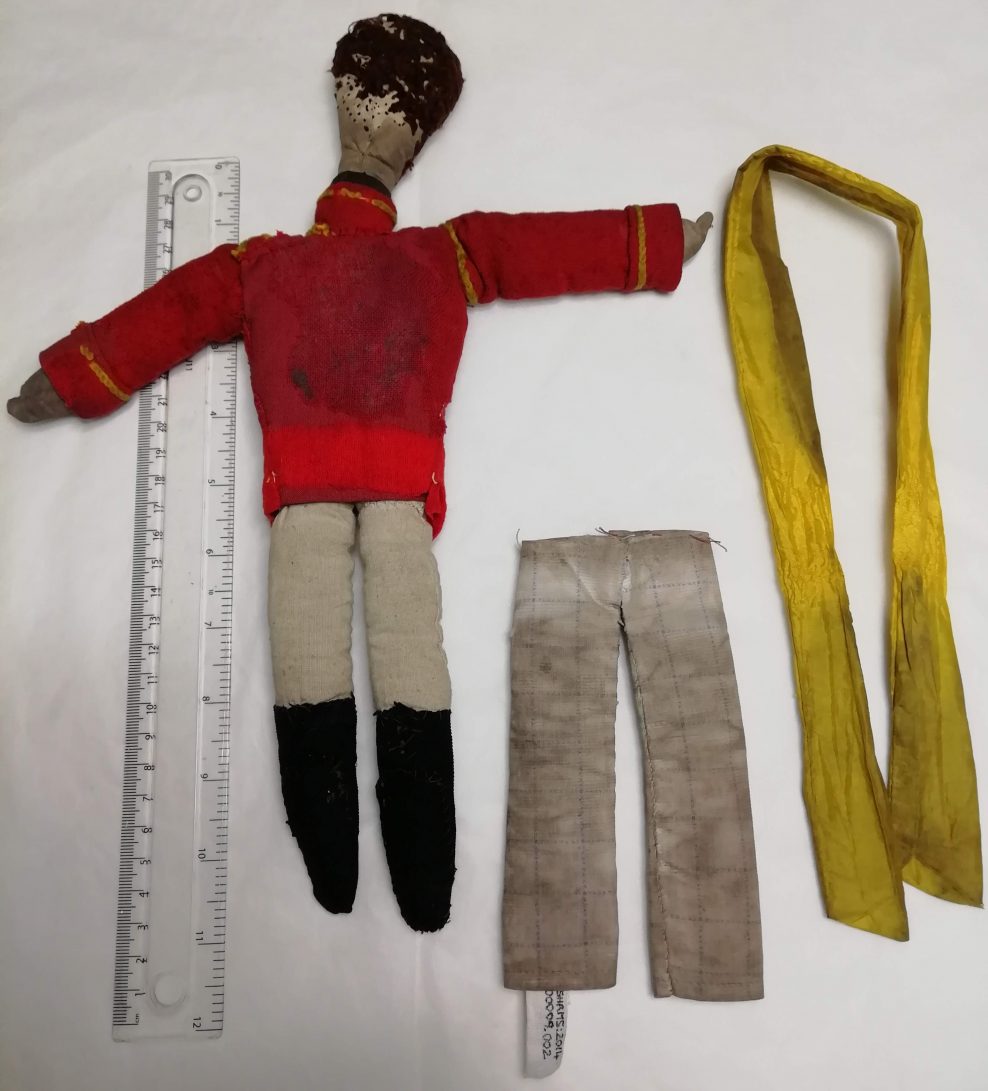