The floor of the Muniment Room at Magdalen College, Oxford has been laid with over 450 medieval tiles. The tiles were cleaned, stabilised, and their condition documented.

The Muniment Room was designed as an archival space to house deeds and other important records. It is part of Muniment Tower, a late 15th-century Grade I Listed Building within the college grounds. The tiles are approximately 22cm square, made in red earthenware and decorated with green, brown, and ochre glazes. They have been laid in alternating light and dark colours creating a checkerboard pattern. The room has two very large 15th-century cabinets housing historic documents and six chests, some of which predate the building.

The tiles are in remarkably good condition considering that the room has been in continuous use for over five-and-a-half centuries. Their preservation is due to the limited number of visitors, evidenced by the much more degraded condition of similar tiles in the room directly below which have lost most of their glaze. The Muniment Room tiles were first assessed in 2017 when they had significant surface dirt and dust. The glazed surfaces are worn in places with higher foot traffic, and there are cracks and small breaks along vulnerable areas such as the corners. At this point the tiles were lightly cleaned with dry brushes and the condition of each tile recorded.

Conservation treatment of the floor continued in 2022 with the support of a Conservation Grant from the Tiles and Architectural Ceramics Society (TACS). The aim of this treatment was to check the condition for any changes in the previous five years, to remove deposits on the glazed surfaces, and to stabilise any moving fragments. The first part of the project was completed in February 2022 when the accessible tiles were cleaned and stabilised.

Treatment led to a surprise discovery of two medieval “encaustic” tiles tucked away under one of the cabinets. These tiles were also made in red earthenware, but they have been stamped with a pattern that has been inlaid with light slip before glazing. Research on the origin of the decorated tiles is ongoing. Similar tiles have been identified in a local church, and paintings of these tiles have been used to project what they would have looked like in a complete roundel pattern.

More information about the Muniment Room and the history of the building can be found on the college website. The tile paintings were found in the Parker-Hore Archive Collection of Watercolours of Paving-tiles on TileWeb. Those who are interested in Medieval encaustic tiles may enjoy a trip to West Hendred Holy Trinity Church. 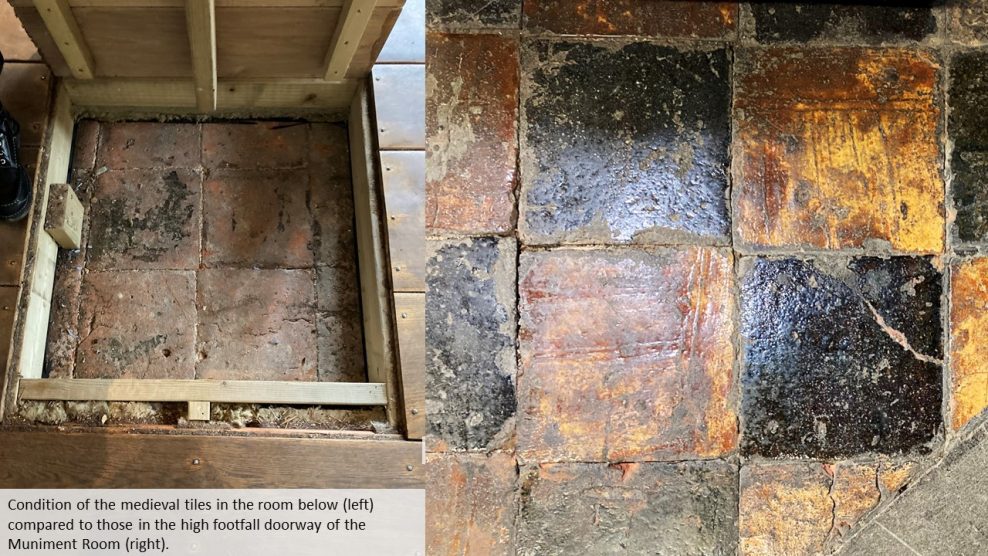 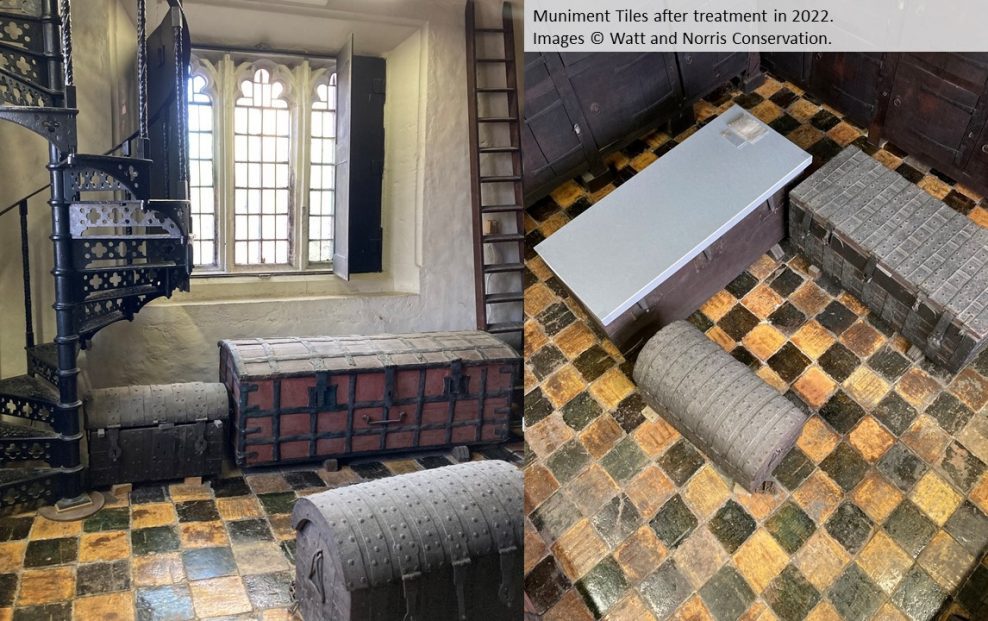