A lambrequin is a short piece of decorative drapery, in this case hung below the elaborate cornice of the Drawing Room over the top of silk damask wall hangings. In 1936 Lady Ballie commissioned the French interior designer Stephane Boudin of Maison Jansen in Paris to help her with the Drawing Room at Leeds Castle. Boudin designed a golden yellow and cream scheme for the sunlight filled Drawing Room that looks out over the famous moat through two sets of large floor to ceiling windows.

80 years later the constant natural light flooding in through the windows had taken its toll on both the colour and strength of the silk wall hangings but the 30 m long lambrequin high up under the cornice had been fairly well protected. Only the linings and tassels of the window lambrequin had been adversely affected by light. But 80 year of dust and dirt had made the 42 large cream silk tassels grey with soil and the lambrequin chenille embroidery was covered in a thick layer of surface dust.

The Trustees of Leeds Castle decided to replace the silk wall hangings with new replica silk woven by the same French company Tassinari et Chatel and to commission us to conserve the elaborate lambrequin. The decision to replace rather than repair the silk wall hangings made it particularly important to find a visually effective cleaning method for the original tasseled lambrequin.

We took the lambrequin down in early January 2017 working from two tall scaffold towers and transporting it soft rolled to the studio. Each large tassels was labeled prior to removal and then carefully surface cleaned to remove loose dust. Each was then hand solvent cleaned by dividing the silk tassel into sections and laying one quarter into a bath of alcohol whilst gently brushing the gradually dissolving dust and soil from the fragile fibres. After repeated rinsing and blotting the tassel was hung to dry – evaporation of the solvent encouraged by cold air blowing around the vicinity. The process was repeated for each quarter of the 42 tassels until all were clean.

One of the really interesting things we found whilst working were several hand written labels dating from when the lambrequin was made and installed the first time. These labels identified where in the room the pieces were positioned. Due to their acidic, brittle condition the labels were in danger of becoming detached and lost. Each was therefore removed, protected inside a custom made, transparent Melinex envelope before being reattached to the lining.

The lambrequin itself was thoroughly cleaned using a combination of vacuum and Smoke Sponge surface cleaning techniques. This successfully lifted much of the surface dust lodged in the structure of the chenille thread embroidery and decorative braids. The linings of two sections of the lambrequin hanging in front of the windows were so light damaged they had to be replaced with new.

Each tassel was then re-positioned on the lining of the lambrequin and secured with stitching via its cord before each silk tassel itself was wrapped in tissue for transportation. We reinstated the cleaned and conserved lambrequin on the newly silk hung walls of the Drawing room at Leeds Castle in April, 12 weeks after removing them. 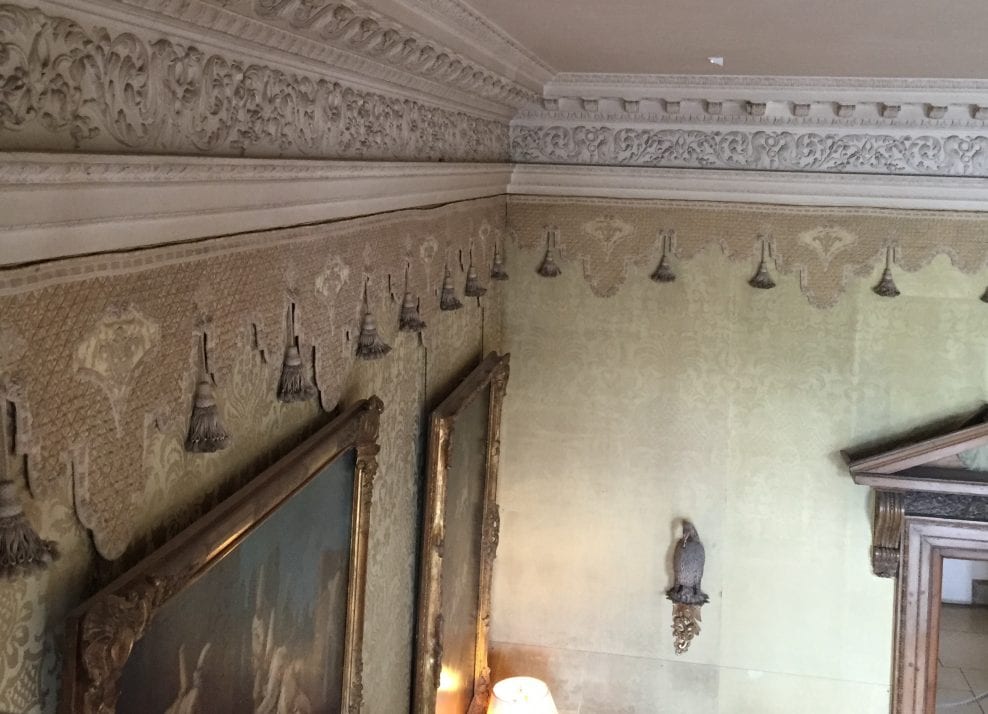 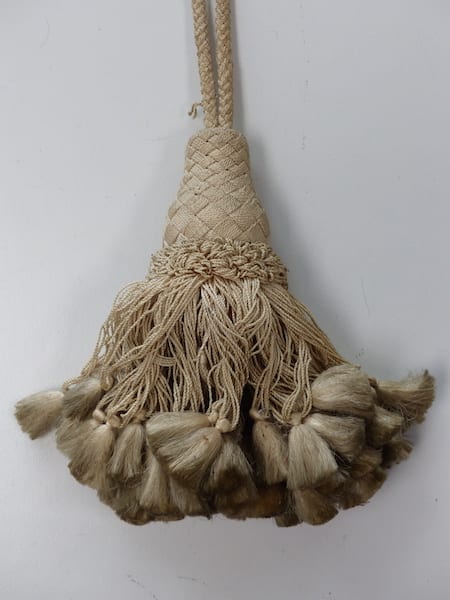 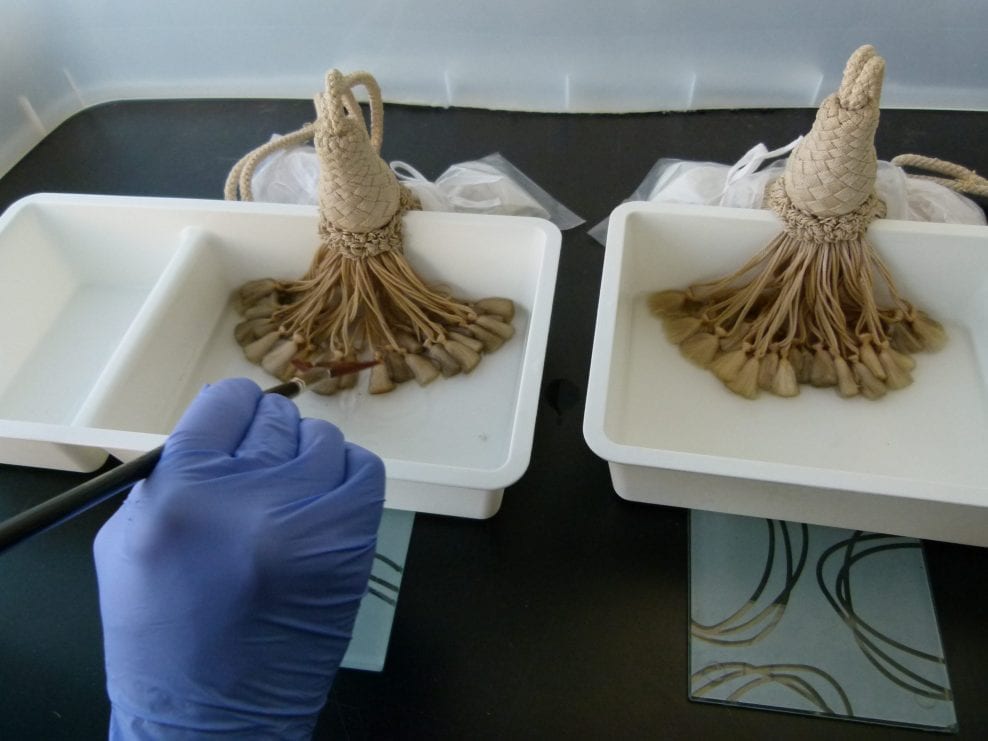 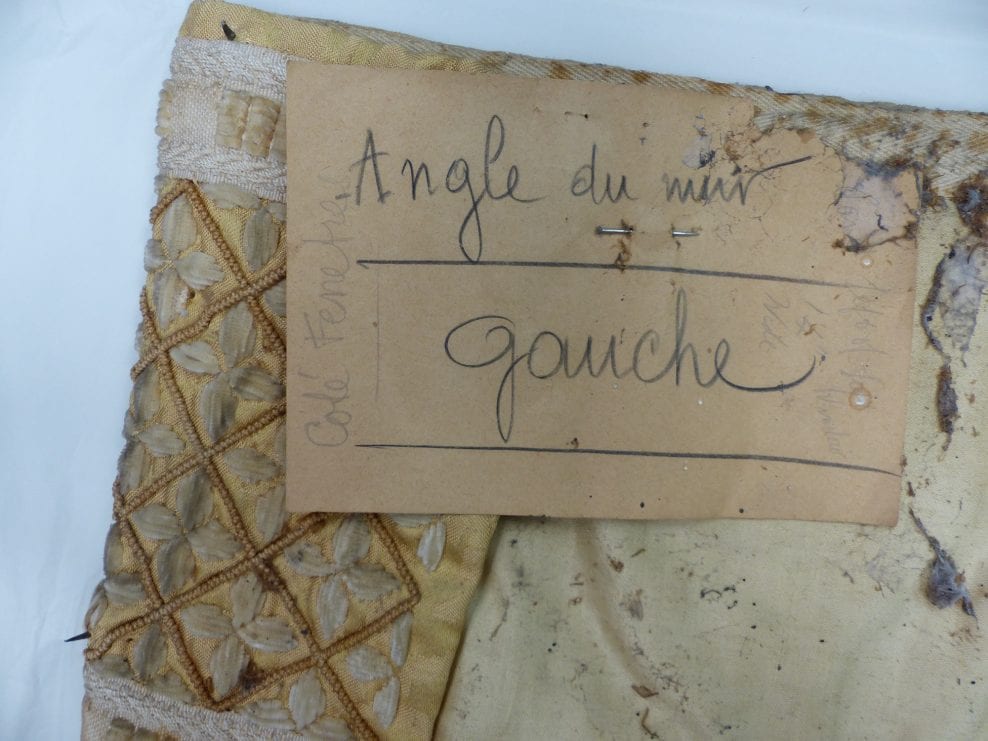 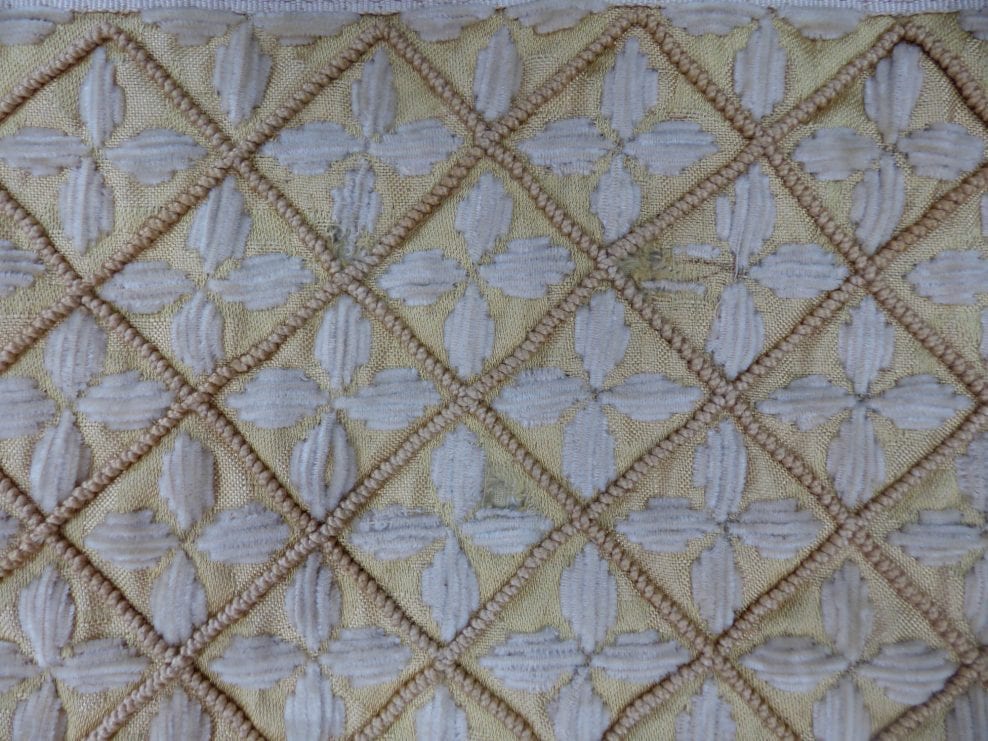 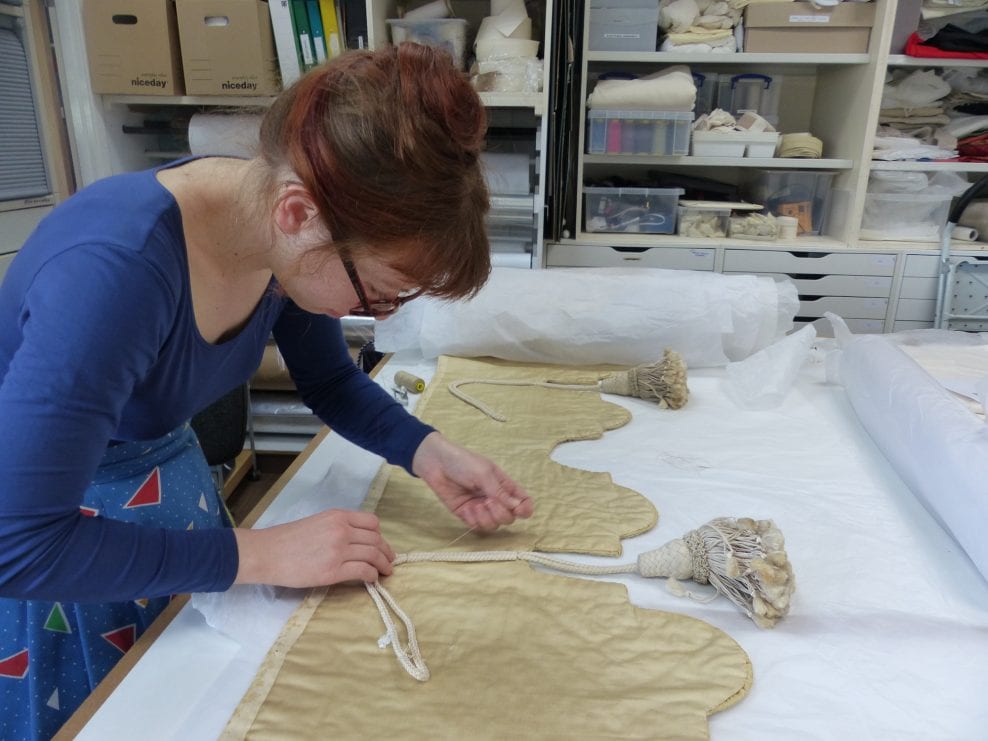 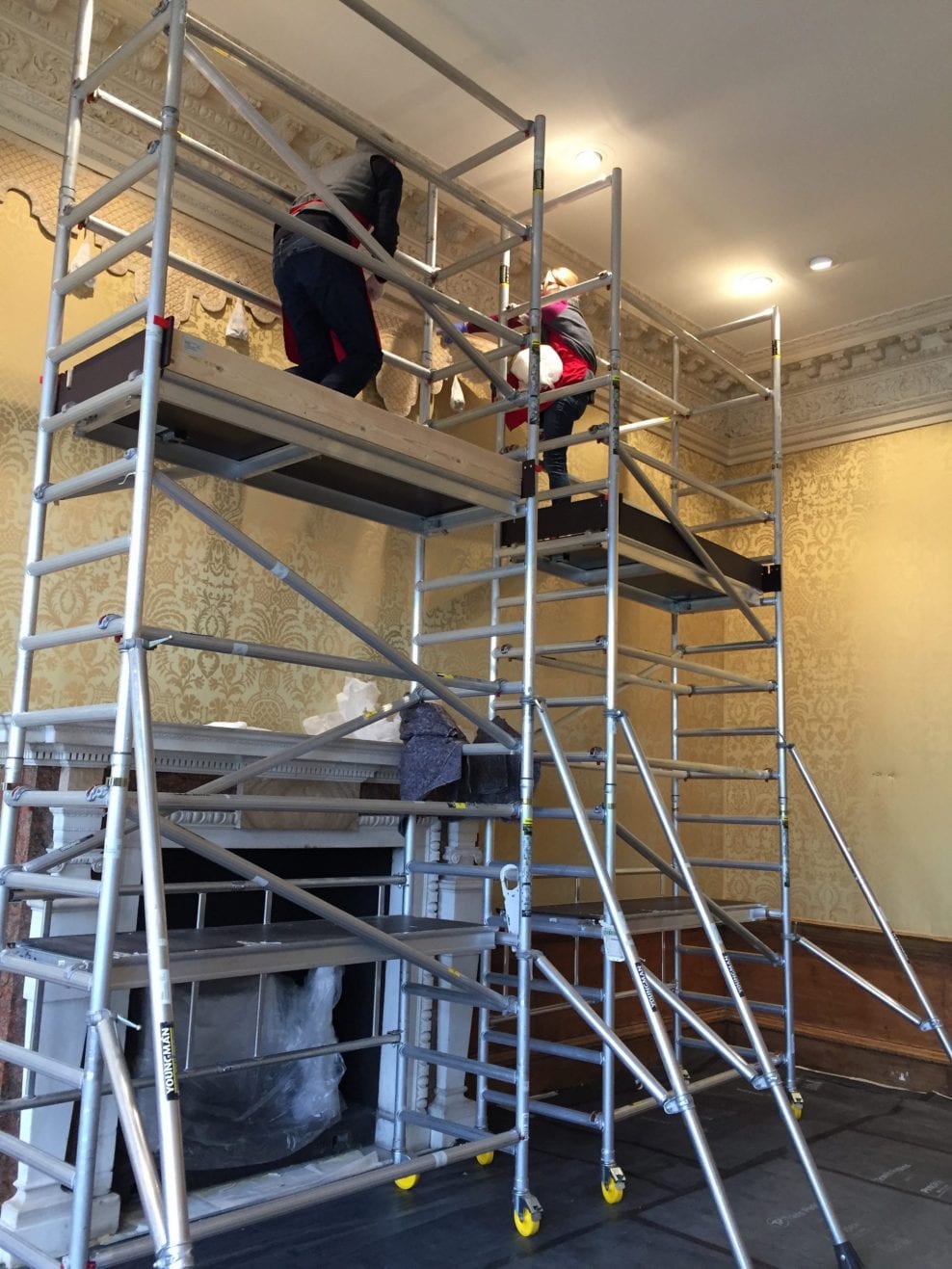 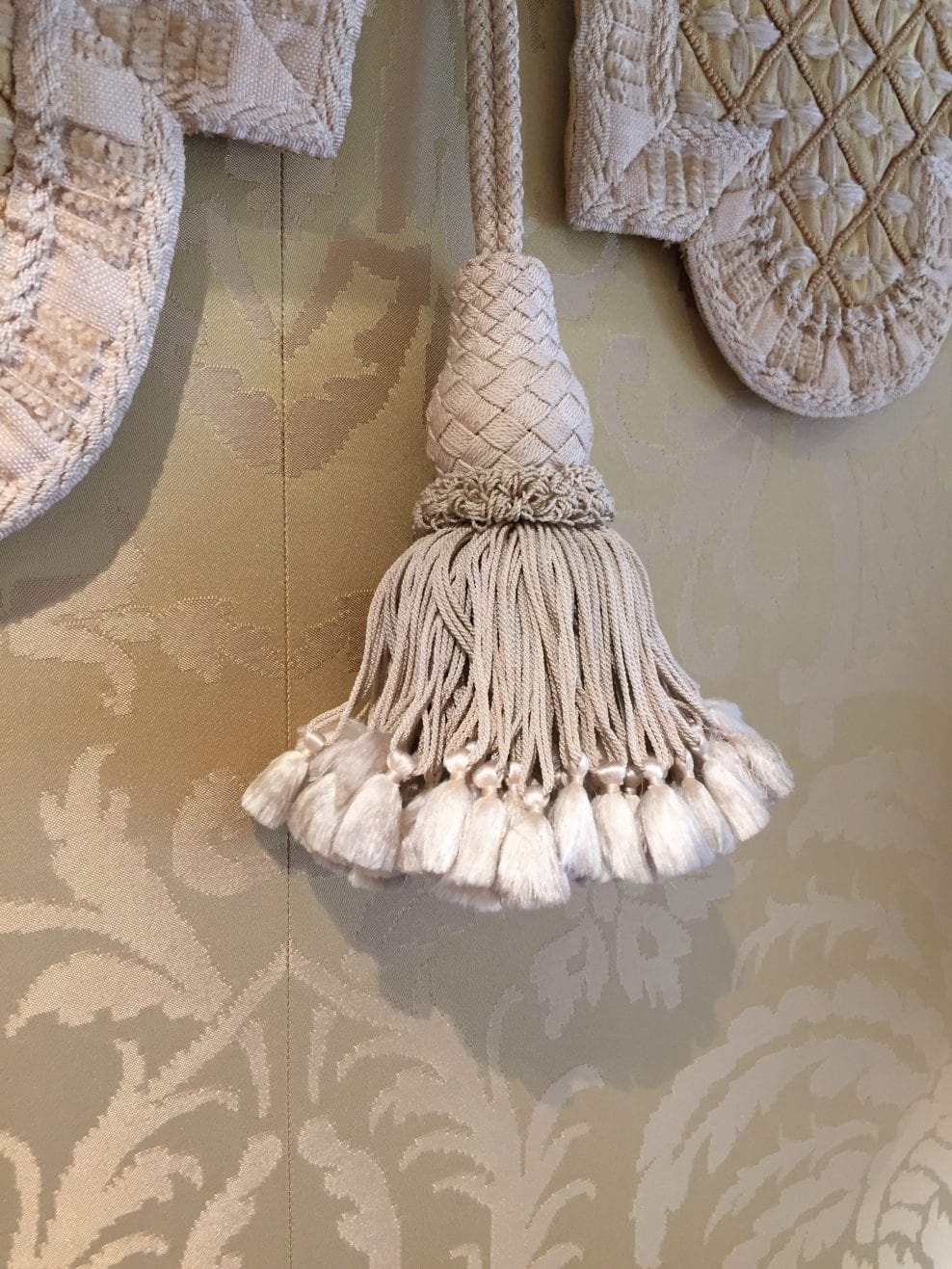 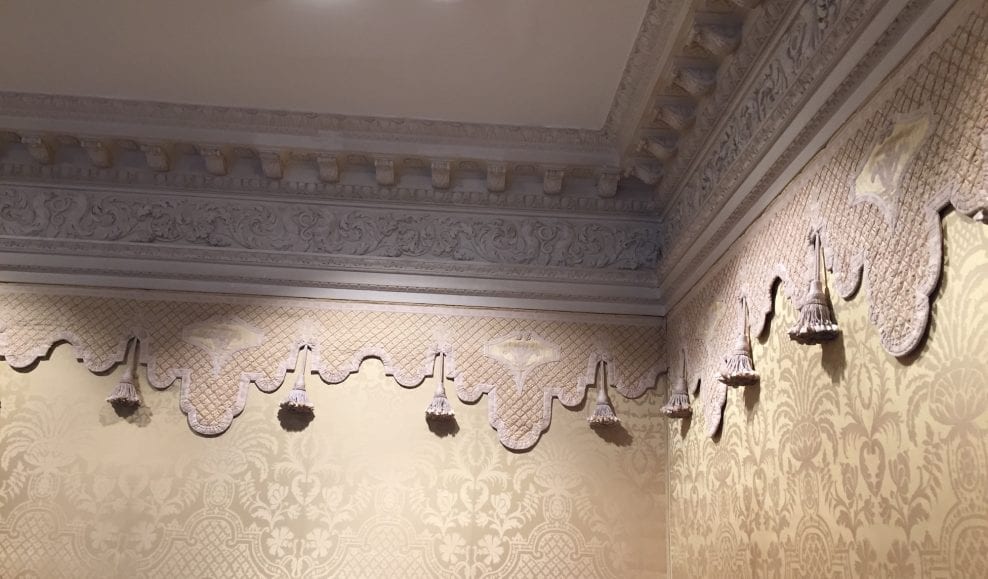