A lovely example of a 16th century vellum binding. Creative solutions had to be found to allow treatments to continue while preserving as much original material and historical information as possible.

Pre-treatment condition
Binding
This volume was a full vellum binding with a hand written title at the front board. The vellum was very scuffed and scratched, especially at the back board where at some point in its life it appeared the volume had been used as a cutting surface. The binding had accumulated moderate to heavy surface dirt. Both boards had warped outwards a little where the vellum had contracted. There were intact vellum yaps at the foredge. Holes were present at the front and back boards which would have once anchored foredge ties; sadly these were lost, however, depressions in the foredge yaps showed where they once sat when tied. The vellum covering had stretched apart slightly at the corners of the back board leaving the board exposed. The front joint was broken; the sewing supports in this area were also broken leaving the front board almost entirely away from the binding, this was held in place only by a small section of the endpaper. The back joint was split at the head and the tail. The spine vellum was intact.
Textblock
The textblock was laid cotton rag paper of good quality. The media was carbon ink and lead pencil. The front pastedown had a loss at the head area of the foredge and was loose and creased at the tail corner. The top foredge tie hole had the small remains of the tie at the inside of the board. The front inner joint was mostly broken with only a small section towards the head remaining intact. The front flyleaf was heavily water stained; this staining followed through the textblock for the first two sections. The flyleaf was creased and tatty at the edges with corners folded and small tears present. The back pastedown had a small loss at the back area of the top foredge tie, the remains of the tie could be found in this area. The back inner joint was broken, the torn remains of the flyleaf could be seen towards the head. The textblock supported moderate surface dirt in places, especially in the more heavily used areas of the volume.
Sewing
The textblock was sewn onto four leather thong supports which were laced into the boards. The supports were all broken at the front joint; at the back joint only two supports were still intact, although they were compromised. The sewing was broken at the front of the textblock leaving the first three sections loose at the tail.

Treatment
The covering material at the front and back boards was surface cleaned to remove accumulated dirt; the covering material at the spine was additionally damp swabbed to remove very heavy surface dirt. The paper sticker was carefully lifted from the front board and the adhesive residue removed. The endpapers were surface cleaned. The spine vellum was loosened from the section backs. The front board was removed from the binding, the back board was left intact as two of the four original thong supports were still strongly laced into the board. A poultice was applied to the spine to soften the adhesive residue, this was then scraped away. Adhesive and paper residues were removed as far as possible from the back of the spine vellum.

Four new alum-tawed leather sewing supports were cut and pared to reduce the depth of the skin slightly, these were then adhered over the existing supports. These were sewn on with linen thread at the back of the textblock. The sewing was repaired, and the loose sections sewn onto the new supports. The spine was glued up with reversible adhesive and lined with Japanese paper.

The pastedowns were lifted at the spine edges of the boards. The alum tawed leather sewing supports were slotted under the lifted pastedowns and adhered to the boards with a reversible adhesive. Patches of 3 layer caecum were cut and corners rounded. These were adhered over the alum tawed leather sewing supports at the insides of both boards.
Two pieces of 3 layer caecum were laminated with a thick Japanese paper core; this prepared caecum laminate was used to repair the spine area of the binding. The volume was wrapped tightly in papermakers wool felt to wick moisture away from the repair and secured with a stretchy bandage. Once dry the caecum repair was toned in situ with water-based leather dye.
The lifted areas at the front and back pastedowns were adhered back to the boards. The back inner joint was reinforced with caecum and Japanese paper. The front inner joint was reinforced with Japanese paper only.

A small piece of patterned ribbon found in the spine area during earlier treatments was lightly flattened and encapsulated to be included in the finished binding. Transparent polyester film was used to make this enclosure.

The first two pages of the textblock were repaired with acid free tissue adhered with reversible adhesive.
Curled areas at the spine edge of the front board were relaxed with local applications of cold 5% gelatine mousse and adhered to the caecum repair. 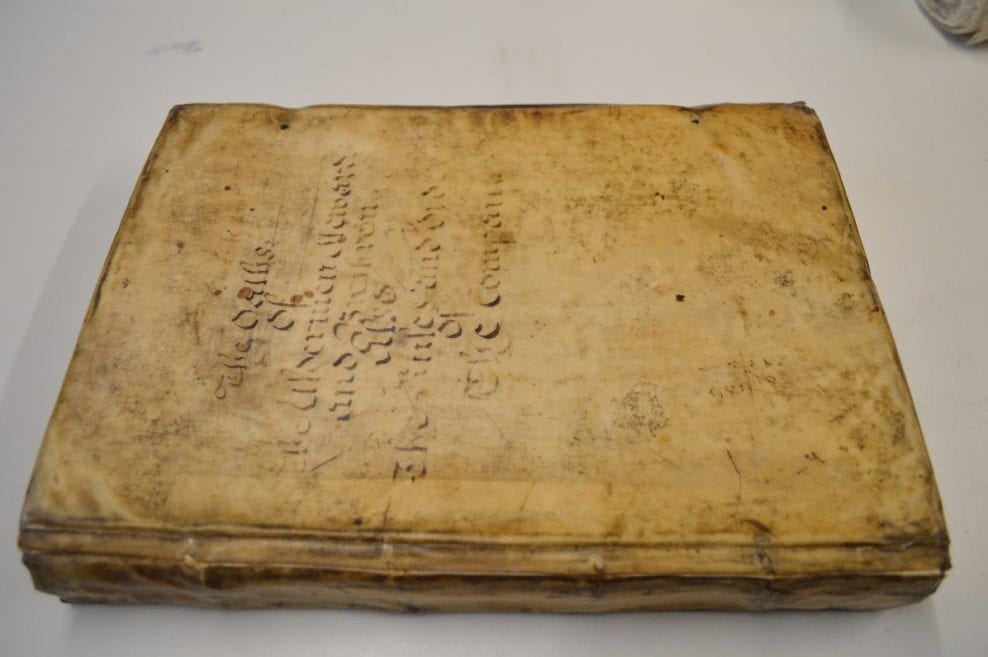 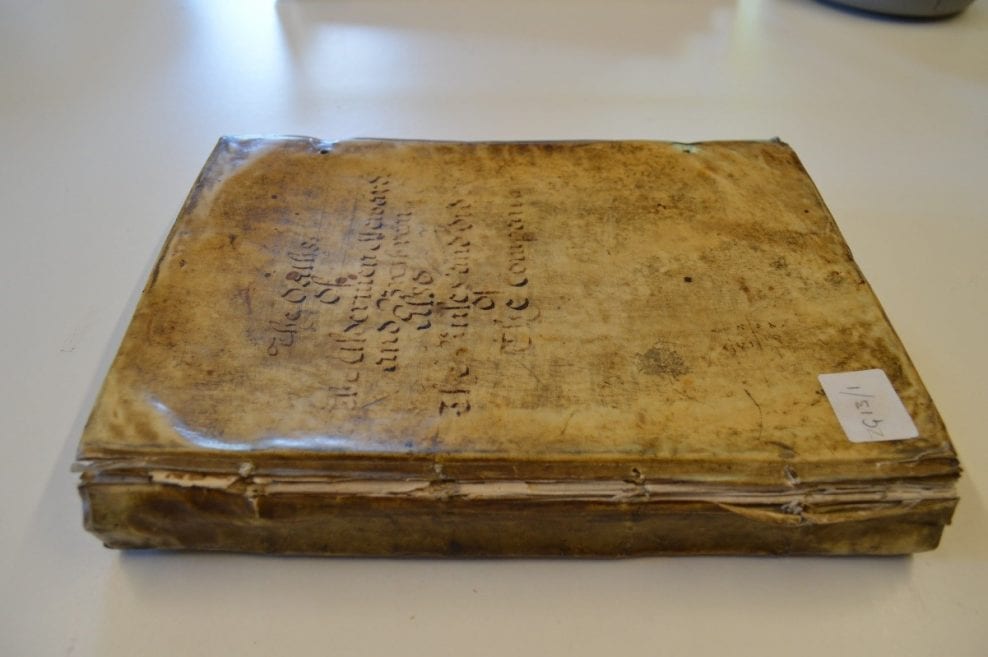 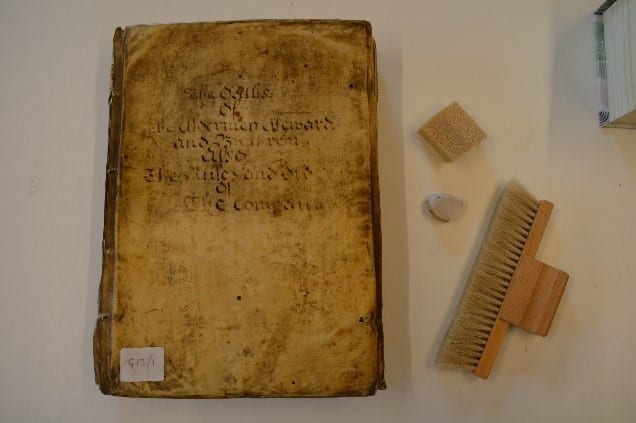 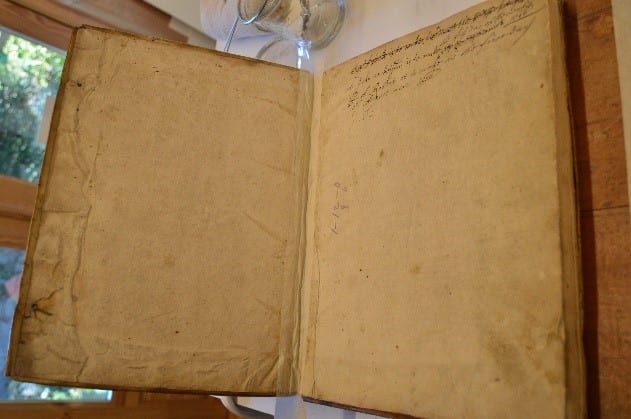 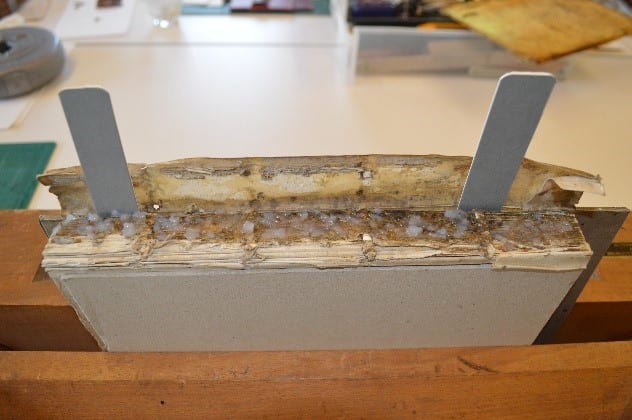 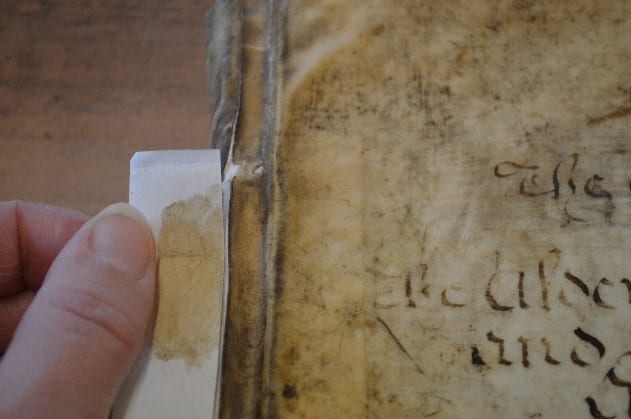 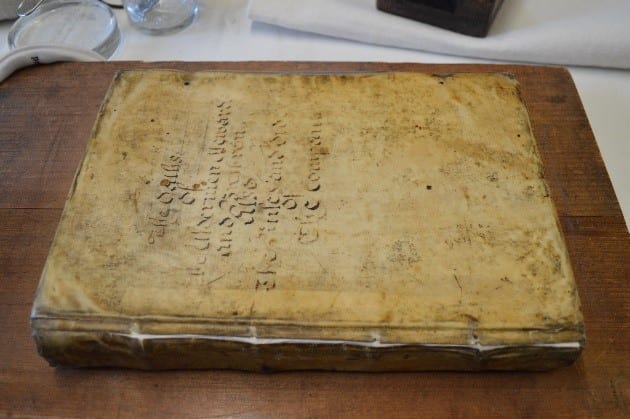 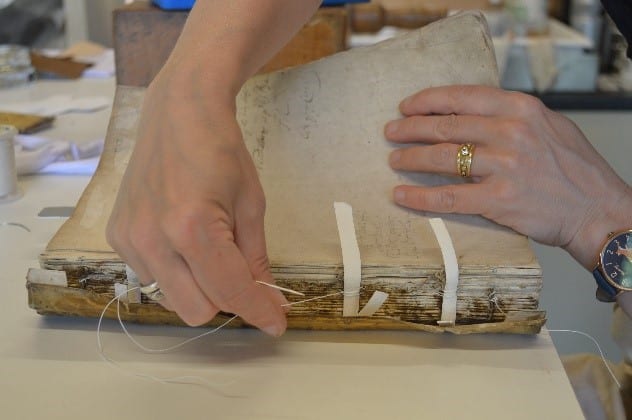