This tray was designed so the pattern can be appreciated from any angle. The central motif of pomegranate, peach, and Buddha’s Hand citron represent the Three Abundances: blessings, long life, and many sons. These are surrounded by rose, peony, apricot, lily, and begonia flowers. The central motif is enclosed by a scalloped wave patterned border with turquoise ground and a stylised lotus patten in black and gilt highlights. The negative space created by the wave pattern, and the scalloped rim of the vessel, mimic the shape of a flower with layers of petals. The interior wall is decorated with fruit and flowers, the exterior with a green cracked ice pattern. The underside of the Fruit Tray has a large and finely painted lotus flower symbolising purity, with three smaller floral sprays in blue.

The Fruit Tray was purchased at auction with the aim of hanging it for display as a decorative art object. At some point before the sale, the piece was damaged by impact causing enamel surface loss and distorting the rim. The object had been restored in the past, these restorations were degraded and damaged in the fall.

The goal of treatment was to stabilise the object and bring it back as close as possible to its original appearance for display. This treatment was complex due to the condition of the object and its shape. It was obvious that the copper was distorted from the impact and that a large area of the surface had been lost. Examination showed that there were moving enamel fragments on the surface and that the previous restoration had yellowed, cracked, and was lifting in some areas. It has abrasions discoloured by surface dirt and corrosion emerging from some of the cracks in the enamel. At fifty centimetres in diameter, the size and shape of the object was also problematic because the copper sheet and enamel layers are very thin. This meant that each time the object was lifted by the rim, the entire weight of the tray is placed on a small area where the wall meets the base. Over time, the physical stress led to enamel loss along the circumference of the base, an inherent structural weakness that had to be considered during treatment and mounting.

The decision was made to remove the previous restoration because it had degraded and covered significant areas of the original enamel painting. Moving surface fragments were reattached and the distorted copper reshaped as much as possible by hand. Once the object was physically stable, the old restoration was removed, the surface cleaned, and areas of enamel loss sealed to create a barrier between the original and fill material. The losses were filled, polished, and the pattern retouched over the fills. The owner was given advise on how to safely handle and display the Fruit Tray after treatment.

Treating this object so that it could continue to be enjoyed as a piece of decorative art was particularly rewarding. The technology and conservation of Chinese painted enamel was the subject of my doctoral thesis and is an ongoing avenue of research. More information about the technology of these amazing objects is available at: www.researchgate.net/profile/Dana-Norris. 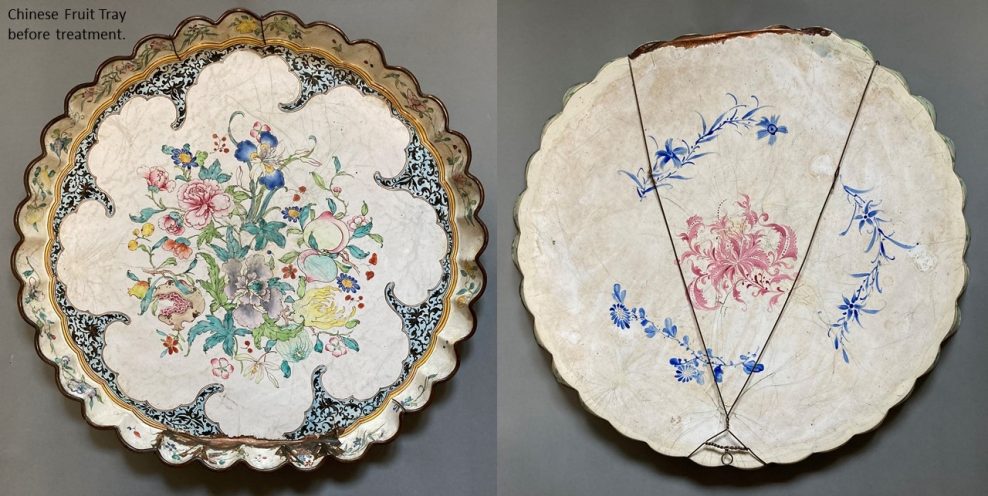 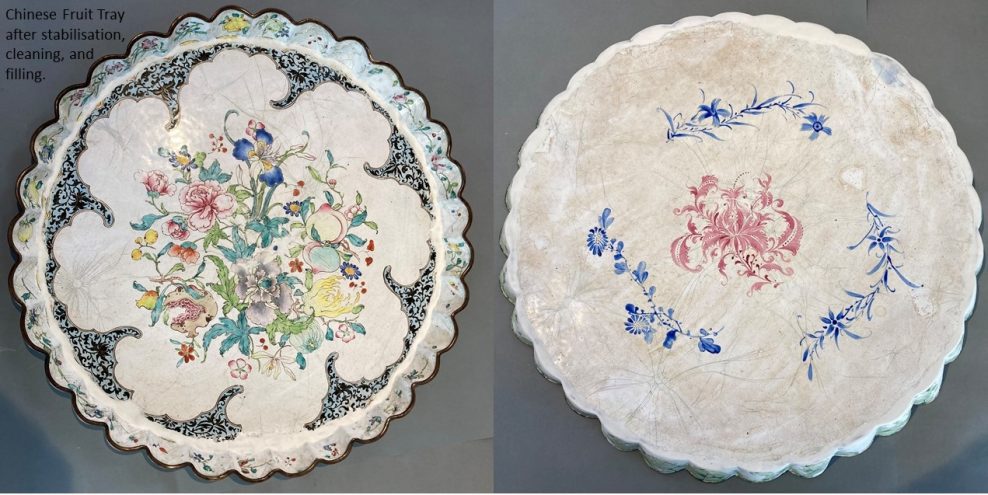 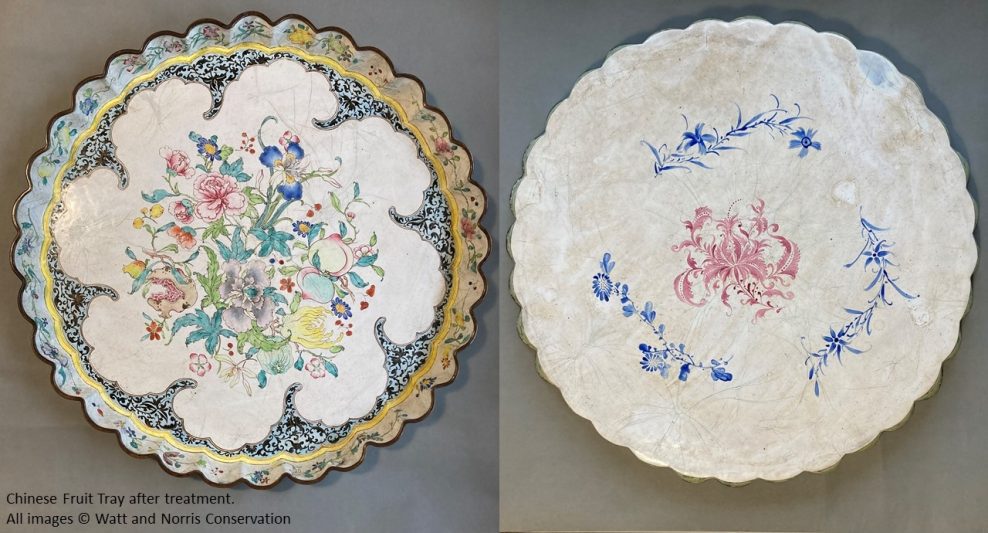