This beautiful nineteenth-century window by the Morris Company was covered in green algae, which was exacerbating problems of paint loss. The window was removed, carefully cleaned and reinstalled with internally ventilated environmental protective glazing (EPG) to keep the glass dry and prevent future algal growth.

All Saints’ Church, Low Catton, dates back to the twelfth century, with additions in the thirteenth and fourteenth centuries. It was restored by the architect GE Street in 1866, during which the fine East Window by William Morris & Co was installed.  The window, described by the Morris expert AC Sewter as “One of the most dramatic and emotionally intense of the firm’s early windows” was made to cartoons by Edward Burne-Jones (figure panels) and Philip Webb (tracery patterns).

The main challenges presented by the window included heavy deposits of green algae on the glass (due to damp conditions in the church), some loss of the painted detail (most likely due to under-firing of the paint, but exacerbated by the damp conditions) and damage to the outer borders of the panels (due to settlement of the building, causing the stonework to open out, in turn pulling and tearing the stained glass panels).  The most important intervention, therefore, was to reduce the effect of the damp surroundings to keep the stained glass dry and prevent further paint loss and algal growth.

The window was re-instated with external environmental protective glazing, with the interspace ventilated to the inside of the building, providing ‘isothermal’ (dry) conditions for the stained glass. The use of external protective glazing protects the stained glass from the weather, and removes the need for the stained glass itself to form the climatic barrier for the building.  This in turn makes possible further conservation interventions, such as reinforcing faded painted detail in key areas of figures and inscriptions by ‘cold painting’ on the reverse face of the glass.

Cold paint mixed from traditional glass pigment with gold size and distilled turpentine has good paintability and is reasonably robust to water and scratching once dry, whilst remaining easily removable using an organic solvent such as ethanol. This is a simple, effective and reversible technique which can substantially enhance the appearance of windows suffering from loss of painted detail.

The stained glass was framed in manganese bronze and screw fixed to the stonework, with the new protective glazing of kiln-distorted (Barley Bent) glass fixed into the original glazing groove. Framing the glass in this manner gave a further advantage of protecting the glass from any further movement of the stonework, whilst allowing the glass to be easily removed in the future should repairs to the stone become necessary. 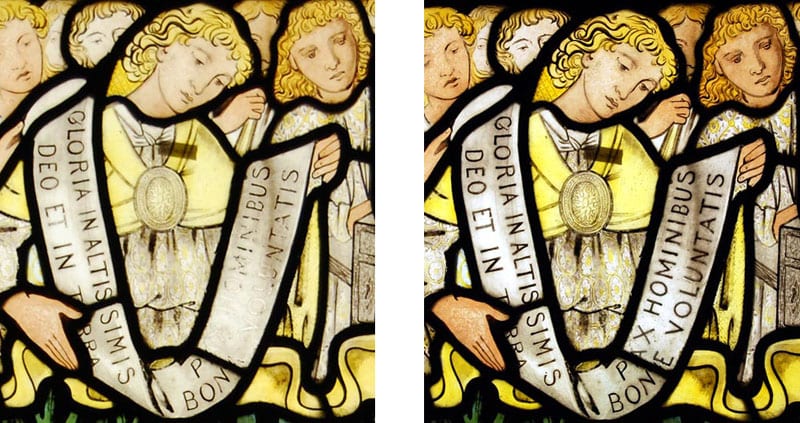