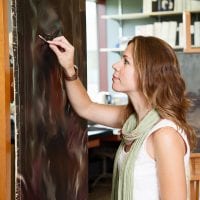 Inês Madruga Carvalho Caldeira is an Accredited Paintings Conservator-Restorer and an Accredited member of ICON (2020). In 2012, she received an MA in Conservation of Fine Art, from Northumbria University. Prior to that, she graduated in Structural/Civil Engineering from the Faculty of Science and Technology, New University of Lisbon, in 2005, and worked as a structural engineer in Portugal and the United Kingdom.

She was appointed Fellow at the Smithsonian Institution Museum Conservation Institute (MCI) in June 2012, and afterwards joint Fellow at MCI and the Smithsonian National Museum of African American History and Culture, Washington DC, USA. She carried out research (e.g. development of a new prototype stretcher), conservation treatments on several 19th and 20th century paintings from the Smithsonian collection, conduct surveys, and had the opportunity to work closely with conservators of different specialties, as well as conservation scientists, curators, registrars, art handlers, exhibition specialists and fabricators.

Later on, Inês was a Lecturer on an 11 month contract in Conservation of Fine Art at Northumbria University, in easel painting specialism. Since 2016, she has worked in private studios in the UK, namely Ruth Bubb Ltd (Oxfordshire) and Mark Roberts Conservation Ltd (Nottinghamshire), conserving and restoring paintings for institutions, public art galleries, historic houses and private owners. She had the opportunity to perform a wide range of conservation treatments on easel paintings to museum standards, ranging from Old Masters to modern and contemporary paintings, including: surface cleaning, consolidation, varnish (and overpaint) removal, varnishing, filling and retouching, structural treatments such as tear mending, lining, de-lining and re-lining, strip-lining, and conservation framing. In addition to conservation treatments, her tasks also include photography and digital imaging, technical examination and documentation.

Recently, Inês has conducted condition checking for the installation of a temporary exhibition at the BALTIC Centre for Contemporary Art. She has also assisted with teaching in easel painting specialism as a part-time Associate Lecturer in Conservation of Fine Art MA at Northumbria University. Inês regularly attends conferences, lectures, and professional development courses in conservation, fine art and art history, including ’Identification of Pigments using Polarising Light Microscopy’ (2017). She is also a member of The British Association of Paintings Conservator-Restorers (BAPCR).