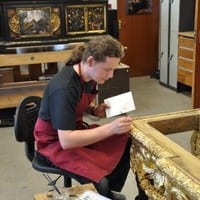 Yannick Chastang studied for six years at the Ecole Boulle in Paris.

In 1995 he took up a two-year post as a junior conservator at the Musée des Arts Decoratifs, Paris.

From 1997 to 2003 Yannick Chastang was Furniture Conservator at the Wallace Collection, London. Highlights of his career there include his project to conserve a drop-front secretaire by Jean-François Leleu for the Prince de Condé being voted runner up at the Pilgrim Trust’s 2002 National Conservation Awards.  In 2001, Yannick Chastang helped curate a marquetry exhibition Paintings in Wood: French Marquetry Furnitureand wrote the accompanying book.

In order to preserve the confidentiality of the client’s projects and collections, the list below is not the full list of executed projects.

In 2003 Yannick Chastang left the Wallace Collection to open his own conservation studio specialising in the conservation and making of fine marquetry furniture. His client list includes the Duke of Buccleuch and Queensberry, the Duke of Wellington and many more owners of British stately homes.  In 2008 he conserved a Boulle coffer on stand for the Lewis Walpole Library (Yale University) in Farmington, Connecticut. The study and conservation of this coffer on stand was made possible by a museum conservation grant from the Getty Foundation and, prior to conservation, the coffer on stand and Yannick Chastang spent three weeks at the furniture conservation laboratory at the J. Paul Getty Museum in Los Angeles for an in-depth analytical study and comparison with the Getty‘s collection of Boulle furniture.  In 2010 he conserved several pieces of furniture for Chatsworth, the principal seat of Duke of Devonshire and, in the same year, the two rare and unique pietre dure cabinets on stand, made by Domenico Cucci in 1686 for Louis XIV’s Versailles, and which are now in the collection of the Duke of Northumberland.

Yannick Chastang also advises private collectors about buying and restoring antique furniture.  He has been vetting the furniture at The European Fine Art Fair (TEFAF) of Maastricht for 15 years, including two years as the head of furniture vetting group. In 2015, he wrote the new TEFAF vetting guidelines for the furniture group.  He was vetting at Masterpiece in London for 5 years before resigning.

Yannick Chastang has been regularly called as an external adviser to the Louvre Museum in Paris, the National Trust in England and the Bayerische Museum in Munich, the Parliament House in Helsinki, Finland.

Yannick Chastang Design also makes fine copies of antique furniture.  Thanks to many years spent conserving the finest antique furniture, our copies are carefully crafted to faithfully reproduce the design and proportions of all aspects of an antique piece, including the gilt bronzes.  In January 2013, he completed a copy of the Bureau du Roi, started by Francois Linke 70 years earlier, and on which Yannick and his staff spent 6,700 hours making and finishing the superlative gilt bronzes.

A Cultural History of Furniture, 6 volumes.

To be published in June 2019 by Bloomburry Academic

Postprint of the international conference organised by the Bayerisches National Museum, Munich, May 2011.

Postprint of the 2012 international congress “the Decorative, Conservation and the Applied Arts”, Vienna, published by Maney Publishing and IIC

Postprint of the 2nd Scandinavian Symposium on Furniture Technology and Design, Marquetry Past and Present, Linkopings Universitet, Vadstena, Sweden May 2007.

Regular contributor to Furniture and Cabinet Makingmagazine, with about 15 articles published to date, including:

Ripple Moulding for the 21stCentury

In the Workshop with Yannick Chastang, Real French Polish

Is wax the only finish you need

The King’s Desk, 75 years in the making

A huge and heartfelt thank you to you and your team for your painstaking work on the Boulle clock - it looks beautiful.  We are so grateful for you dedication and professionalism, it was a pleasure to work with you.

Frances and the project team at Knole.

Few are able to give practical as well as academic advice, but one person, Yannick Chastang of Yannick Chastang Conservation Ltd, stands out as being a leading exponent of both.  Yannick has always been ready, indeed eager, to rush to a book in his own library, to dig deep into often impenetrable websites and to always come up with an answer.  His advice on the practical side of all aspects of making furniture as well as the highly complex techniques of making gilt-bronzes furniture mounts is, and continues to be, invaluable.