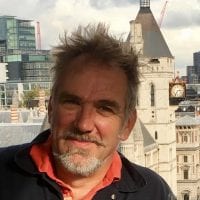 I studied Horology at the School of Jewellery and Silversmithing and following graduation in 1984, he worked for six years at Public Clocks in London. In 1990 I established the Cumbria Clock Company Ltd with my wife Lynn, which is situated in the small village of Dacre in the Lake District National Park. We have grown Cumbria Clock Company into a sizeable business, employing 17 members of staff consisting of the office team, the workshop conservators and external horological engineers. Four of the external horologists are situated in Dorset, Devon, Yorkshire and Shropshire, with the Technical Service Manager working from an office in Whitchurch The Company is responsible for the annual maintenance of over 1,000 church and public clocks situated throughout the UK and has undertaken conservation projects to some of country’s most prestigious church and public clocks. My experience includes working on the country’s oldest clock at Salisbury Cathedral, the Astronomical Clock at Hampton Court Palace, as well as major projects at Canterbury, Durham, Hereford, Gloucester, Worcester, Truro and Manchester Cathedrals. Other commissions include the Westminster Clock, better known as “Big Ben”, and the Royal Liver Building, Liverpool. The company also designed, manufactured and installed the world’s largest internal bell hammer, which struck the Olympic Bell and started the London 2012 Games and the conservation of the Government Buildings clock in Fiji. Other clients include the Historic Royal Palaces, English Heritage and the National Trust. I am a Court Assistant of the Worshipful Company of Clockmakers, London, Director of the Antiquarian Horological Society, Director of the British Watch and Clockmakers Guild, a Fellow of the British Horological Institute and an ICON Accredited Conservator Restorer and ICON Mentor.